A belated Happy New Year...The reviews are in! 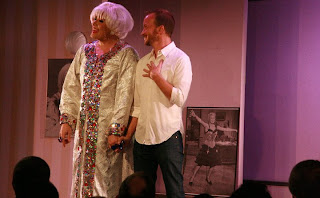 I cannot believe it has been almost a month since my last blog! But, I've been busy opening an off-Broadway show! The good news, the audiences and critics alike love the show! The bad news is that the weather this winter has been brutal and I've been scheduled throughout January on Wednesdays. What do the Wednesday's of January 2011 have in common? A snow storm has hit NY every Wednesday...including another one tomorrow! Here are some pics from my opening night: http://www.theatermania.com/new-york/news/01-2011/photo-flash-john-mcdaniel-julie-wilson-et-al-at-op_33299.html
I forge ahead. It's snowing outside as I write this and it is scheduled to be another messy day tomorrow. My afternoon performance has been canceled! Hope you'll join us tomorrow night. As I move closer to February 2011 and the fast approach of my 50th birthday, I want to encourage everyone to make 2011 about LIVE PERFORMANCE! Since this is my blog, I'll start with my show! Here is the latest: My show will become an open-ended run beginning Jan. 31, which also marks Carol Channing's 90th birthday.

Mark Robert Gordon directs; a portion of the proceeds benefit The Dr. Carol Channing & Harry Kullijian Foundation for The Arts.
The production, celebrates the career and persona of the unique theatrical legend. Accompanied by a three-piece band, I blend Channing's standards with original material and other familiar songs sung in a spot-on Channing-on-Broadway perfection. The musical surveys Channing's life with many stops along the way for my unique — and riotous — 'ad-lib' interactions with the audience.


Starting Jan. 31, performances will be Mondays at 8 PM and Wednesdays at 3 PM. There will be no performance Feb. 14. Additional performances as part of the prior limited engagement include Jan. 19 at 2 PM and Jan. 26 at 2 PM and 8 PM.

St. Luke’s Theatre is located at 306 West 46th Street. Tickets, priced $41.50 to $66.50 (with Premium Seats at $76.50), are available at www.Telecharge.com or by calling (212) 239-6200. For more information visit www.AsCarol.com.
Happy Tuesday!
Our next show is tomorrow night, the 26th at 8PM. I would LOVE to have you in THAT audience. Two potential producers from London are coming in to see the show! What separates me from others who have performed as Carol? I don't make fun of her and it is done with the utmost respect. I even have Carol's endorsement. Every show that I do raises money for Carol Channing's Foundation to the arts. The audiences have loved the show (read my guest book at www.RichardSkipper.com), the critics have loved the show (see below), please help an audience to find us! I would like to offer half priced tickets to you and your friends to come and see the show Wednesday afternoon.
Please call me at 845-365-0720 and I will take care of the details. Get five people to buy tickets and I will offer you two comps!
This is a family show and is a throwback to old fashioned CLEAN entertainment. Some young audiences are discovering Carol Channing through this show! And older audiences are rediscovering her. Call me and let’s talk.
Richard Skipper 845-365-0720, www.RichardSkipper.com or www.AsCarol.com

"Skipper does have -- a gift he shares with the Tony Award-winning legend -- is the ability to simply set a crowd at ease and give them an evening of pure entertainment."
Theatremania
http://www.theatermania.com/new-york/reviews/01-2011/richard-skipper-as-carol-channing-in-concert_33223.html 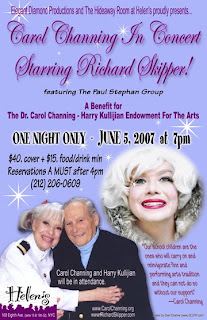 “What makes Skipper's performance so touching and enjoyable - and sustainable for the 90-minute length of his delightful show is that he presents us with a Carol Channing that's toned down to a more personal level. It's no wonder that the Broadway legend herself is one of his biggest fans. It's during Skipper's frequent interactions with the audience where he truly gives us a sense of Channing and her genius for sharp-witted eccentricity. Innocuous exchanges with patrons get whipped into gags throughout the evening.”
BROADWAYWORLD.COM, http://broadwayworld.com/article/Review_Richard_Skipper_as_Carol_Channing_in_Concert_20110114 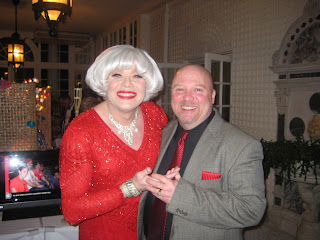 "Ms. Channing is a true theatre legend and Mr. Skipper is doing a great job of paying her a tribute.
GATOR MUSIC (a blog)
http://gatormusic.blogspot.com/2011/01/richard-skipper-as-carol-channing-in.html 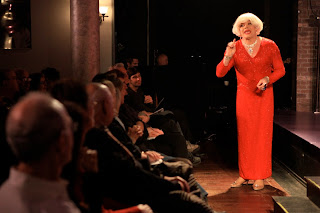 The mission of the production, is to present show biz “as it used to be.” Good-natured mock-gentle tilting, lilting and cherished show tunes (with a gifted musical ensemble accompaniment), wrapped-up cabaret history in a cerise sheath dress. Nothing interferes with the painless hark-back to a few decades ago.
ROTTENTOMATOES.COM
http://www.rottentomatoes.com/user/536605/blogs/?id=684123 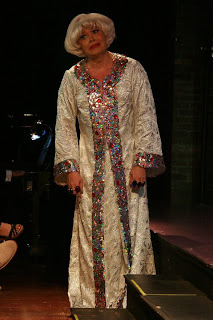 "The show is like sitting in Carol Channing's living room as she tells you stories and sings all the songs that she is best known for; it's easy to forget that you are watching an impersonation rather than the real thing."
THE EASYhttp://www.theasy.com/Reviews/richardskipperascarolchanninginconcert.php

"Watching Mr. Skipper embody the spirit of Carol Channing, it is evident no one has captured the true essence of this remarkable iconic performer with such precise and loving care"
Sandi Durrell, TIMES SQUARE CHRONICLES http://t2conline.com/entertainment/theatre/1135-richard-skipper-as-carol-channing-is-the-real-thing 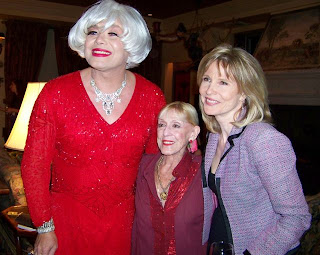 "It is great fun to sit in a theatre and listen to (and sometimes be invited to sing along with) songs from such Broadway hits as Hello, Dolly!, Thoroughly Modern Millie, and Gentlemen Prefer Blondes, along with a three-piece band and a charming diva. Richard Skipper, a veteran of the cabaret scene, perfectly channels Carol." Ed Malin, nytheatre.com review
http://nytheatre.com/showpage.aspx?s=rich11812

"His spontaneous interactions with his audience was always poised and charming as he delighted the opening night audience with stories and songs that captured the legend’s essence perfectly."
Patrick Christiano, TheatreLife.com
http://theaterlife.com/node/4999 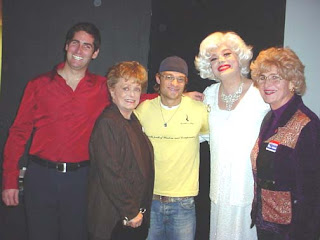 "Richard Skipper has both captured the public persona of the actress and added an appealing overlay of engaging whimsy...it’s as much a house party as it is a show. His dramatic recreation of Dolly Levi’s plea to her dead husband, “Ephram, let me go,” leading into “Before the Parade Passes By,” was extremely moving."
Peter Leavy, CABARET SCENES MAGAZINE
http://cabaretscenes.org/theater/2011/skipper_richard.html

AND the NY POST! "He hooks us from "Hello, Dolly!" on, capturing both Channing's vocal inflections and superb comic timing...his running commentary and improvisations truly capture Channing's wittily deadpan persona. His "Carol" is as warmly engaging as the real thing." Frank Scheck http://www.nypost.com/p/entertainment/theater/sings_merry_carol_lywc9DWlLLW1ioyqA4cDSJ 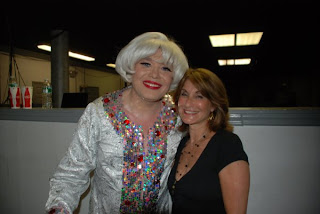 And here is an interview with me by Elli: The King of Broadway: http://www.facebook.com/l/7211aqxNAwY72iJYdgiLhMZfUXg;www.broadwaykingdom.com 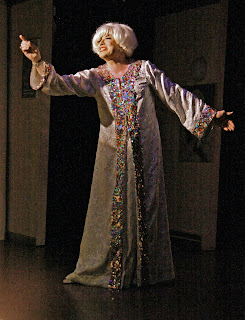 "..(I)f you’re looking for an enjoyable evening in the theater where one is carried away on a soulful journey of Carol Channing’s past, Richard Skipper As Carol Channing In Concert certainly fits the bill."
Jillian Gramling, Broadway.TV http://www.broadway.tv/blog 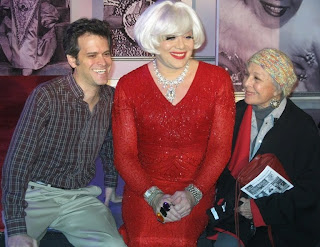 (director/producer Mark Robert Gordon and Marge Champion join me after the show, photo credit: Ronald Giles)
"Richard Skipper's loving tribute to Carol Channing remains effervescent and ever-fresh . . ."
Bruce-Michael Gelbert, Q ON STAGE, http://www.qonstage.com/QOnStage_articles/2011skipper-gelbert/index.htmlRead audience comments in Guest Book at www.RichardSkipper.com.
If you have seen the show (and have not done so already), please add your own.

Please pay it forward...Here is what audiences are saying about my work: (Taken from guest book at www.RichardSkipper.com) Keep checking website for additional comments.


I was just knocked out by Richard's Carol concert at St. Lukes (not the St. James)!! I've loved Carol Channing since I was but a lad, and his patter and songs brought it all back.
BRAVO, Richard!!!!
John McDaniel 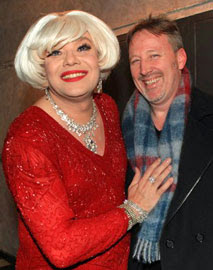 "Having mounted his very first show "Carol Channing's Broadway" at Don't Tell Mama in Manhattan and, after many years performing as Channing around the country, Richard Skipper, as "Carol Channing" In Concert, is "back where he belongs" lighting up the stage at St. Luke's Theater, also on 46th St. (Restaurant Row) between 8th and 9th, with his razor-sharp tribute of the great, irrepressible Carol Channing. With every diamond studded move, gesture and song in place, Skipper is still growin', still crowin' and still goin' stronger than ever!"
Lynn DIMenna - Cabaret Scenes

What a joy to attend opening night of Richard Skipper's yummy "Carol Channing" show! I had a grand time and Richard truly is a National Treasure!
Mary Stout, NYC 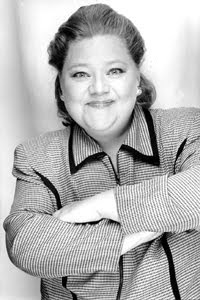 Hope you and/or your friends comments will be added tomorrow night!
With grateful XOXOXs for your support!
Richard Skipper 845-365-0720


. . . the first time ever I have been shown with such love, respect and polish. Richard Skipper is a true musical comedy star! He is fabulous as me!"~ Carol Channing
www.RichardSkipper.com
Follow me on Twitter www.Twitter.com/RichardSkipper 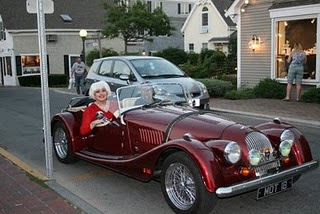