I'LL BE SEEING YOU: THE LIBERACE MUSICAL! 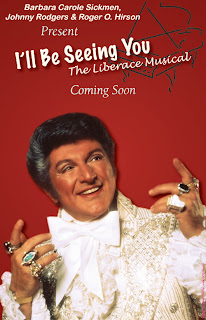 "I cried all the way to the bank."
-Liberace

Happy Friday!
I hope this finds you gearing up for an arts filled weekend.

Tonight, I'm interviewing Peggy Pope at Barnes and Noble in New York to celebrate her hilarious memoir, "Atta Girl". It would mean a lot to have as many of my friends, family, friends, and readers of this blog there as possible. IF this is a huge turn out, this will forge a relationship with B and N that will allow me to do more evenings like this. The details are below.
Today is the birthday of Irving Berlin. composer Jerome Kern concluded that "Irving Berlin has no place in American music—he is American music."
He wrote the theater's national anthem, There's No Business Like Show Business.

Today, I'm celebrating the man who epitomized that more than any other: Liberace! Pre-production is underway for a new, original Broadway musical about Liberace. A renowned pianist with a flair for the outlandish, Liberace gave his audiences impeccable performances while clad in sequined capes. In a career that spanned four decades of concerts, recordings, motion pictures, television and endorsements, Liberace became world-renowned. During the 1950s–1970s he was the highest-paid entertainer in the world and embraced a lifestyle of flamboyant excess both on and off the stage.
I am a huge fan and one of my greatest regrets is that I never saw him perform LIVE. However, if Barbara Carole Sickmen has her way, all that's going to change. I met Barbara several years ago at a backer's audition for The Christmas Story, based on the tele-movie of the same name about Ralphie who has to convince his parents, teachers, and Santa that a Red Ryder BB gun really is the perfect gift for the 1940's.

After the "audition" that evening, a group of us ended up at Joe Allen's for a late night supper.

Barbara was among three Barbara's at our table. HOWEVER, this Barbara made the biggest impact. She had actually seen my tribute to Carol Channing. What struck me the most about Barbara was her passion about this project she was working on, a musical CELEBRATING the life and legacy of Liberace.
She wants to celebrate not only his HUGE contributions to popular culture, but honor him as the man he was as well.
Robin Leach (yes, THAT Robin Leach) said earlier this week, "Listening to the songs, seeing the storyline of the book and knowing Liberace from interviews I had with him over the years, I know that he would be genuinely happy with this new Broadway project."
Barbara has said that  Bugsy Siegel played a role in Liberace’s Las Vegas career. This musical is a celebration of the showman, but it’s also about how Las Vegas became the Gaming Capital of the World. Bugsy and Murder, Inc., who are very much a strong subplot, had a vision for Vegas, and Liberace had a vision to become more than a piano player.

Liberace is in the news again. Michael Douglas is also currently in production on a bio-pic called The Man Behind The Candelabra.
Next week on the 16th, it would have been Wladziu Valentino Liberace's 93rd birthday. He was born in West Allis, Wisconsin.

His father was an Italian immigrant who played French horn in orchestras providing background music for silent movies. He required his children to learn music. 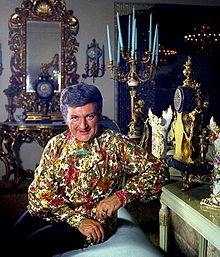 Lee had difficulty speaking and had speech therapy, concentrating on giving his speech a smoother flow, eliminating the effect of listening to one parent who spoke with an Italian accent and another with a Polish accent.
During the Great Depression,  Mom worked in a cookie factory, brother George drove a a grocery truck and gave piano lessons, sister Angelina worked as a secretary and nurse's aide.
He excelled academically at West Milwaukee High School, and was active in extracurricular activities, excluding sports.

His big break came in 1939 with an audition for Dr. Frederick Stock of the Chicago Symphony. He eventually found a spot with the Jay Mills Orchestra, a popular dance group.
"I don't care if he played on a street corner with the Salvation Army Band," said the maestro after hearing him on a local radio broadcast. "He will play with us."
For the next six months, Walter Liberace performed as "Walter Buster Keys."

He eventually got to Vegas and getting a little advice from the King, Elvis Presley, that would change the way the world would see Liberace, his costumes became more and more extravagant and it became a contractual obligation with the Vegas hotels that demanded that he outdo even himself.

It is hard to believe that Liberace has been gone 25 years.
He died on February 4th, 1987. 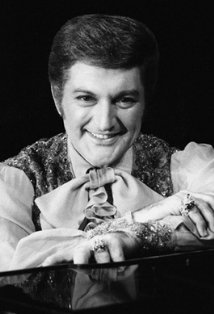 He made his Las Vegas debut in November 1944.
The city would become the entertainer's home -- one of many around the country -- but more important, it would become the place he would develop his spectacular stage persona.

Liberace's museum was a financial wellspring that funded scholarships for aspiring musicians and artists.The museum has since closed due to a failing economy.

Asked in a 1985 interview how he wished to be remembered, Liberace replied: "I'd like to think that the most enduring quality about me will be the music, because everything I'm doing ... is to promote the music of future talent.
My foundation is based on promoting new talent, and I feel that my longevity will survive through other people in this business because I'm going to provide a lasting support and a foundation for artists. "
When an entertainer is as "out there" on stage as Liberace was, most people tend to forget that there is a human being underneath the facade.
I've experienced it performing as Carol Channing.
I discovered over the years that if I told people that I was an entertainer, some people would be impressed, some, maybe not.  However, if I told them that I performed as Carol Channing, instantly, some people formed an entire picture of me based on, most of the time, their OWN ideas of who and what I am all about.

I've had people make comments about me with me standing right next to them as if I could not hear them and/or as if I had absolutely no feelings.


If it weren’t for Liberace, there would be no Madonna or Lady Gaga, Elton John, Bette Midler or Elvis because it was Liberace who helped the King glitz up his act.

Yesterday, I saw an interview on the Billboard website in which a "reporter" interviewing Liza Minnelli about the release, for the first time on CD, of her live Winter Garden Concert.
We all know that she was born into Hollywood royalty, but Liza has made her own name on stage and screen and concert halls around the world.

Rather than focusing on the CD and the concert, the interviewer went the usual route of asking about Liza's "gay icon" status and the Broadway production of End of The Rainbow which deals with the final days of Judy Garland. Why would a reporter ask their subject that deals with the final days of that subject's mother's life?
And while we are on the subject, why are audiences going to see this? If Tracie Bennett is as wonderful as critics and Tony voters are saying she is, why not a show that celebrates Judy's life and legacy rather than a show that focuses on the dark side.
I won't be seeing this show.
I loved the Boy From Oz beyond Hugh Jackman's phenomenal performance because it CELEBRATED Peter Allen.

His songs were made popular by many recording artists, including Elkie Brooks, Melissa Manchester and Olivia Newton-John, with one, "Arthur's  Theme", winning an Academy Award in 1981.
He left an incredible legacy and yet in interviews some people only want to acknowledge him as "Liza's gay husband". He, AND Liza, deserve better than that!
In addition to recording many albums, he enjoyed a cabaret and concert career, including appearing at Radio City Music Hall(Liberace also had very successful appearances at Radio City Music Hall) riding a camel.
Right now, John Travolta is in the news. He has been vilified before a trial has taken place. Why do we build people up in our culture to quickly knock them down?
When bloggers, pundits, comedians, etc. say the hurtful comments they make about anyone, they are no different than the kids on the schoolyards who are bullying each other.

That brings me back to Barbara Sickman and the project she is involved with, along with Johnny Rodgers. 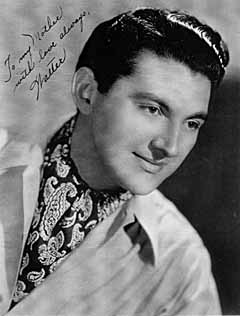 She lives, breathes, and sleeps Liberace. She is the ONLY one who has the exclusive rights to this through the Liberace estate. Movies and other productions may come along who want to treat his personal life like pulp fiction.
Thank God for the Barbara Sickman's of the world who will respect their subjects. He admitted that he hated shabbiness.
THAT is why Barbara is the perfect person to bring this project to fruition. Liberace's desire was to Entertain!
PERIOD!!
No other entertainer in the world ever took the risks that Liberace took. However, it is not a risk for Barbara to bring us this incredible story. The time is ripe for this.
"Except for music, there wasn't much beauty in my childhood," he later recalled.

(Robin Leach is a source for parts of this blog)
Robin Leach has been a journalist for more than 50 years and has spent the past decade giving readers the inside scoop on Las Vegas, the world’s premier platinum playground.
Follow Robin Leach on Twitter at Twitter.com/Robin_Leach. 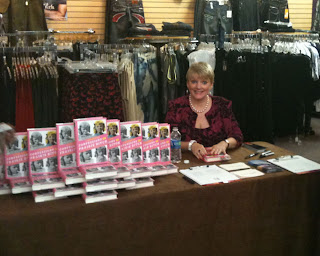 Alison Arngrim  also writes about Liberace in her hysterical memoir, Confessions of a Prairie Bitch.
In 1965, Alison's family moved to Hollywood.
Thor Arngrim, Alison's father worked with Seymour, Heller and Associates and later Arngrim Petersen, and as a manager worked with Liberace, Rene Simard and Debbie Reynolds. He also managed the careers of his children. Stefan starred as Barry Lockridge in Irwin Allen's TV science fiction drama Land of the Giants and opposite Kirk Douglas in The Way West.
Alison played the despised Nellie Oleson on Little House on the Prairie.
Today, Alison continues as an actress and comedian in Los Angeles and around the world.
I will be going to see Allison at The Laurie Beechman Theatre in NYC on June 15th! Please join me if you're available!

Thank you Liberace and Barbara Carole Sickmen for the gifts you have given and continue to give to the world!Barbara and her creative team, I am convinced, will be breaking legs all over the world. 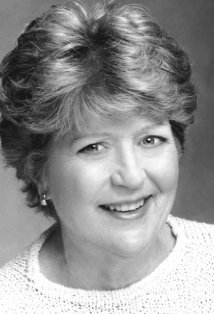 
RICHARD SKIPPER CELEBRATES PEGGY POPE!
In her new acting memoir, "Atta Girl: Tales from a Life in the Trenches of Show Business", the Obie-winning actress Peggy Pope (http://en.wikipedia.org/wiki/Peggy_Pope) details an eventful life in the theater, film and television spanning over five decades. But unlike most celebrity tell-alls, this thoughtful and deeply personal account brings to light the trials and experiences of the vast majority of actors, those who either flirt with stardom or play supporting roles throughout their careers. Richard Skipper and Peggy Pope are sitting down for an exploration of Peggy's incredible career in show business. Email me at Richard@RichardSkipper.com for more info.

Tomorrow's blog will be..YOU TELL ME! I'm open to suggestions!!