A native of St. Louis, Missouri, Garrett Lewis was a featured regular performer on The Red Skelton Show for three seasons.  His career began while still in college when he was offered the dance lead for a season at the Kansas City Starlight Theatre.
After that season, he went to New York. His first Broadway show was My Fair Lady followed by First Impressions in which he understudied the lead as well as performing the part. David Merrick later brought him back to New York in the intimate Los Angeles revue, Vintage 60. Aside from his television work which included many major network shows at the time on both Coasts, he appeared extensively in clubs across the country, supporting such leading ladies as Anna Maria Alberghetti, Arlene Dahl, Dorothy Provine and others. He was a soloist in The Lido Show in Paris, and appeared as the male lead in Little Mary Sunshine in Paris.
HELLO, DOLLY! played for 2844 performances on Broadway at the St. James Theatre starting with Carol Channing in the title role.  When Carol did her first National tour, her Cornelius Hackl was Garrett Lewis.
A friend of Garrett’s, who was assisting Gower Champion on the Broadway Company of Hello, Dolly, told him that a new road company was going to be starting a West Coast tour and would be coming out to LA three months later to hold auditions. Garrett knew that Charles Nelson Reilly, an old friend of his, had played it on Broadway and most likely would continue with the tour. Garrett had only one experience in summer stock years earlier at the Kansas City Starlight Theater. Also, in that show was Charles Nelson Reilly! Garrett also felt that he was the furthest from Reilly in type as one could imagine. His friend told him to just keep it in mind because they would be casting. 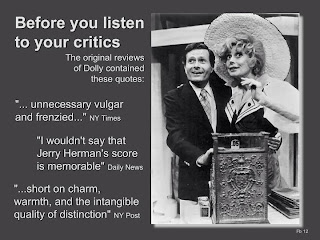 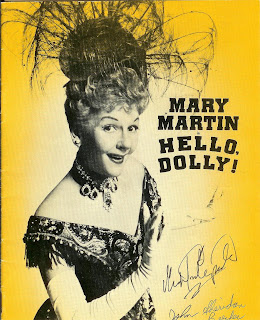 Garrett went on not knowing the blocking except what he rehearsed with Mary Martin in the Dancing number.
Mary Martin was different from Carol Channing but was equally wonderful.
Hello, Dolly! premiered in the West End at the Theatre Royal, Drury Lane on December 2, 1965 and ran for 794 performances. Champion directed and choreographed, and the cast starred Mary Martin as Dolly and Loring Smith as Horace Vandergelder, with Johnny Beecher as Barnaby, Garrett Lewis as Cornelius, Mark Alden as Ambrose Kemper and Marilynn Lovell as Irene Molloy. Dora Bryan replaced Martin during the run.
Garrett stayed with the show as long as an American could stay with a British Company at that time, one year. It depended upon the demand of one’s role in the show. If they could be replaced by British actors, they would be. The first people to go were Judith Drake as Ernestine and other players on that tier. Marilynn Lovell left shortly after that and Mary Martin left in May of 1966. Dora Bryan then took over the role of Dolly Levi.
Dora Bryan was a lovely lady and rehearsed forever! She started out playing it very much like Mary Martin and very straight with no English humor…at first. About two months into it, she suddenly became the Brighton Beach comedienne that everyone loved. Garrett didn’t know her prior to this and had no frame of reference. She was a Music Hall entertainer. She was famous for certain things. She began adding all of those elements to the show. Dora stayed with the show until it closed.
When Garrett left the show, he went to Spain and did a movie. 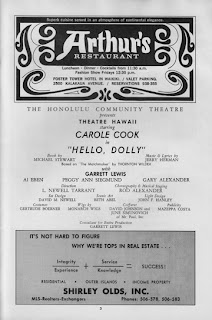 Garrett revisited Dolly several years later in Anaheim with players from various Dolly productions. He played opposite Joanne Horne as Irene Molloy. Patricia Munsel played Dolly. He then got a call to do it in Hawaii with Carole Cook. He thought Patricia Munsel was fine. He LOVED Carole! They shared a house in Hawaii. The director of the Hawaiian Company was trying to change everything from Gower’s original concept. Carole and Garrett went ballistic. They desired to do the tried and true. Their thought was don’t mess with success. They knew the show. Carole had starred in the Australian and New Zealand Companies. They were very copacetic as to what Hello, Dolly was and should be. They had two weeks of rehearsals.
Garrett was also responsible for hiring a young unknown to play Minnie Fay in that production. Her name is Georgia Engel. The auditions were held for the rest of the Company in Hawaii and Garrett thought she was terrific. There was something magical about her performance.
They also became good friends. Georgia actually developed a crush on Garrett. Her father was in the Coast Guard and there were several catered dinners with the Company and the Coast Guard on the base at Waikiki. It was incredible and Garrett also loved her…as a friend. Georgia had this innate gift to play that quality that the world has come to love. She was funny without being physical. It was that voice. Interesting side note, Georgia’s sister was Miss Hawaii. The last time Garrett saw Georgia, he was designing something at Universal Studios and she was on the lot.
Looking back, Garrett was a very put together guy at the time that Hello, Dolly came his way. After Carol Channing was cast in Dolly, the rest of the casting was done to make larger than life cartoonish characters. Garrett brought a more realistic approach with a great sense of humor to the role.
Jerry Herman captured all of the qualities that work in a great musical naiveté, dreamers; those that are striving and desiring for more. This show’s story proves that it does happen. This show is about making one’s dreams come true. In the case of Dolly herself, she is a charming lady. This is an appealing character who makes her life work.
Garrett has had two careers since Dolly. Right after Dolly, he did a few movies. He was also cast in Applause with a run of the show contact but ended up not doing it.  He has since stopped performing. He believes that one gets what they dream of in life.
Garrett desired to be on the stage desperately and he got it, but he didn’t desire it to the point that some people who go into the theater makes it their lives. He just desired to be a working entertainer. He didn’t want to be a STAR. He never waited a table in his life. He never had the will to just work at it. Opportunities came his way and he took them. At the beginning of his career, he went right from summer stock into My Fair Lady. After Hello, Dolly came along; he went right into STAR starring Julie Andrews at Twentieth Century Fox. After leaving performing, he became a designer for film and television which is what he retired at. He did too many things very well and it was never hard. He is not one to say one should concentrate on one thing. He thinks that if one has multiple interests and one can be expressed in those areas, go for it.
He has designed houses for Barbra Streisand and Herbert Ross. That led him into designing movies. When an opportunity presents itself and one is not prepared and does not take the chance, it may not happen again.
There are many fond memories of his Dolly days, but nothing compares with the night the Queen Mother came to see the show in London. That night, he also met the Queen and Lord Mountbatten. When the curtain rises and the audience sings God Save the Queen, it is magic. The Royal Family is sitting up in a box stage right.
Garrett feels that he is an Anglophile anyway! He loved living there.
Hello, Dolly is obviously an experience that he will not soon forget. It afforded him the opportunity to meet so many wonderful people. It took him to London. He became great friends with Mary Martin and her husband, Richard Halliday. It was a wonderful life changing experience. He loved it. Appearing at The Drury Lane Theater was a big WOW. 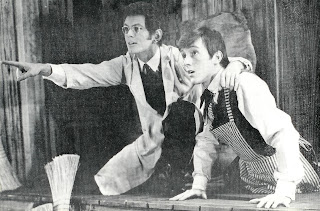 Thank you Garrett Lewis for the gifts you have given to the world and will continue to give!

My next blog will be... My Exclusive interview with Karen Morrow on Hello, Dolly!


Posted by RichardSkipper at 8:19 PM