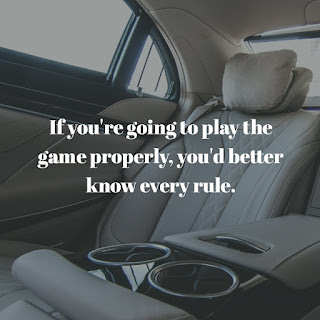 Happy March 27th, 2017!
March 27 is the 86th day of the year. It is a rainy day here in New York. As I sit down to begin today's blog, I'm listening to The Andrews Sisters singing Mister Five by Five on the 40s channel on Sirius XM Radio.

Today is Gloria Swanson's Birthday. I was lucky enough to meet her shortly after I moved to New York in 1979, a memory I will never forget!
It is also Sarah Vaughan's birthday. I regret that I never saw her live but I'm a huge fan.
Michael York, who starred in Cabaret with Liza Minnelli and Joel Grey!

Speaking of cabaret, tomorrow officially ends cabaret month here with the MAC (Manhattan Association of Cabarets and Clubs) Awards. Unfortunately, a conflict precludes my attending. I wish all the nominees and everyone else a fun filled successful evening. The festivities take place at B.B. King Blues Club in Times Square.
I want all who see this to set aside a minimum of five minutes today for taking a walk outdoors or in your home.
As you do this, reflect on those things that you are grateful for.  Perhaps you're grateful for the beautiful flowers growing in a nearby park, a refrigerator full of food in your home, or a kind neighbor on your street. Try to stay in the moment and concentrate on your feelings of gratitude until the walk is over.
Most people tend to see the same things day after day, taking people and objects in our lives for granted.
Taking a gratitude walk in your everyday environment can give you a lasting emotional health boost.


I am grateful for my friends and the good times we have together. This weekend I saw two shows that were top notch. First, David Maiocco and Chuck Sweeney have joined forces for a masterpiece called Lee Squared. David plays Liberace and Chuck Sweeney is Peggy Lee and they share brilliance equally!
Two Lees for the price of one: Maiocco pays tribute to flamboyant pianist and candelabra enthusiast 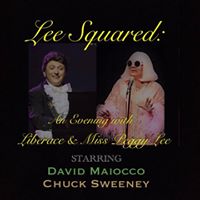 Liberace, and Sweeney keeps the memory of Peggy Lee alive with a fevered impersonation that includes a heavy dose of camp hilarity.
We went with a group of friends from the cabaret community,  there to support other artists. We met at Almond. The company was great. The food was great. AND the conversation is great! We ALL should be doing this. We need to support each other instead of being an island when going out to these shows. Go as a group!
On Saturday night, I had a dinner with six friends OUTSIDE the cabaret community! That's important too!
Yesterday was a full day. First of all, I was fortunate to be asked to interview David France (How To Survive a Plague). This was an event for Gay Pride Rockland to benefit the new Pride Center. It was great meeting David and his husband, John.
I thank Brooke Malloy and Diana Wilkins for asking me. Anytime they need me, I'm there. I also encourage EVERYONE to buy David's book. It should be required reading in every school!
Afterwords, we joined my friend and producer Russ Woolley and his parents for an intimate dinner at Russ' home. After dinner, Danny, myself, and Russ went to Don't Tell Mama to see Sharon McNight.
Sharon is in town to present tomorrow night at the MAC Awards.
Her show was a celebration of her first show at Don't Tell Mama thirty years ago. It was great to go down that nostalgic journey with her. She will be back on Thursday night.
GO! GO!! GO!!! see her! It is a masterclass in how to do it! It was great to see so many friends there as well.

In celebration of the end of cabaret month, the MAC Awards, and April showers ahead, today, I'm launching a new series beginning with today's blog. Each day, I will be celebrating a different artist who is making contributions to the world of entertainment.  I will also be listing some of my recommendations. PLEASE go see these shows and tell them I sent you!

Today. I start this series with Nicolas King and his latest CD. My grandmother used to refer to me 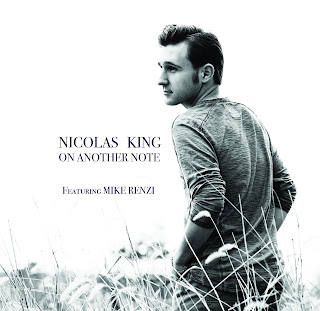 as an old soul. I feel the same about Nicholas. Don't let his young years full you!

Nicolas has been performing since age 4. He was seen first on Broadway in Beauty and The Beast, then in ‘A Thousand Clowns’ opposite Tom Selleck, and ‘Hollywood Arms’ directed by Hal Prince, all before age 13. Other credits include 8 consecutive annual performances on The Jerry Lewis MDA Telethon, ‘The View’, ‘Today’ show, ‘Liza & David’, ‘Sally Jesse Raphael’ and twice on ‘The Tonight Show’ with Jay Leno. 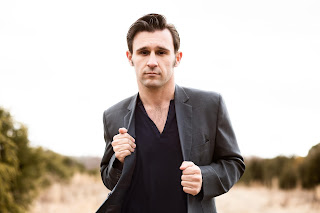 This album is a collection of standards, that,when played from track one to the end, lyrically tell a very complete, very specific love story. 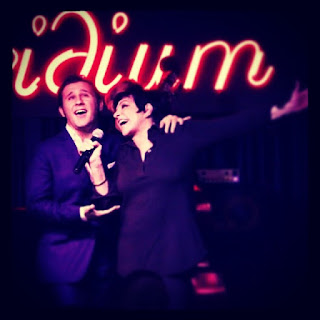 Why THIS project?
It's been my dream to return back to the studio with Mike Renzi, especially since he's been on the road for the last three years with Tony Bennett and Lady Gaga! This album is a total passion project, something we've both wanted to do for a while now. The timing was finally right! 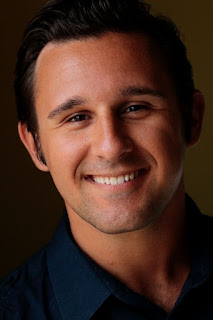 Who are your artistic heroes
I really admire Jamie Cullum's approach to his craft. Nothing scares him, musically. He's one of the most innovative artists we have in the industry.

Who have had an impact on you and your work?
Liza Minnelli for one. She has given me an great deal of one-on-one training, support, and brainstorming.
She directed every nightclub act I've ever done, from my first when I was 11, and has remained a very present force in my life. I'm eternally grateful for everything she's given me.

If you had the opportunity to stand up for the NEA, what would you say?
I think the NEA's reputation speaks for itself. Art and expression are the very core of every nation around the world. Regardless of whatever may occur around us, our community is stronger than ever, and impossible to knock down.

What is it about the business that you think has changed for the better...and for the worst since you began in it?
The business that constantly changes is a healthy one. A pond that stays stagnant becomes hazardous without a fresh water supply bringing oxygen and life. In the same way, the ever evolving business is exciting! (My only complaint is I wish we had more venues for the jazz and cabaret world.)

How important are the arts to you personally?
Crazy important. I've never known anything else! The arts are more to me than just a way  of making a living- they're a hobby, a passion.
Are you making the kind of art that you envisioned you'd be making?
Absolutely!

How would you describe the arts scene where you grew up?
I grew up in Rhode Island, a state legendarily rooted in jazz history, and a family full of musicians. My parents were always taking me to see my grandmother or aunt perform somewhere, or any band that they liked, so I grew up around live music constantly.

Do you recall some great parties in real living rooms where people got up and sang and told stories?
The most legendary have, of course, been at Liza's house.
When everyone's taking turns singing, and you're sharing a couch with Lauren Bacall, Rosie O'Donnell, Tony Danza and Michele Lee, watching Liza and Lorna singing 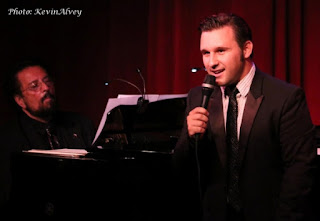 something from Easter Parade, it truly doesn't get any better than that. Of course, nothing beats the music that comes from home. My grandmother, Angela, puts her baby grand piano to good use quite frequently, especially when Renzi comes over for dinner. We'll hang by that piano for hours just calling tunes and having a blast!

Do you feel like you’re playing a party in somebody’s living room when you are on stage.
Sometimes!

What are you most proud of? 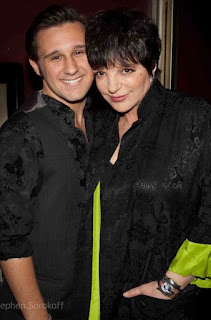 My parents. Their outlook and core value system is absolutely invaluable to me, and I'm so proud of all they've taught me.

What is the one song that resonates most with you?
That depends on the day!


In Other Cabaret News
Do you have your MAC Awards ticket yet?
Tickets will be available through Brown Paper Tickets through tonight.
To order tickets online, GO HERE


Next Monday, 4/4 is  TOMATOES GOT TALENT fourth annual talent show laced with fabulous performances with Randi Levine-Miller hosting! And Cathy Szabo, who Randi picked up at Richard Skipper Celebrates is in the finals. The Triad | NYC Tickets $35.00. Watch the video of this year's finalists at the auditions.  Learn more about them HERE.

KAREN MASON'S NEW ALBUM IS HERE!
"It's the best Karen Mason CD ever!"
ORDER YOURS HERE! 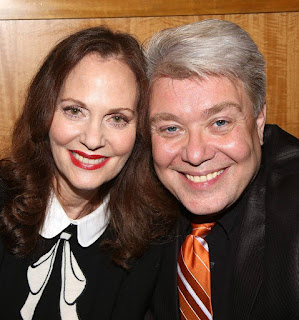 Dancing To The Movies comes to the St. George Playhouse in Staten Island on April 8th and I will be there!  Starring Mirror Ball winner Tony Dovolani, Academy Award-nominee Lesley Ann Warren, Dancing With The Stars pro Anna Trebunskaya and more! Click HERE to order your tickets!

In closing, I'd like to say that my intent is never to offend but we have to stop giving those who do, a free pass!

Life is so much better when you stop caring about what everyone thinks, and start to actually live for yourself!!

Sit back! A new news cycle is about to begin! 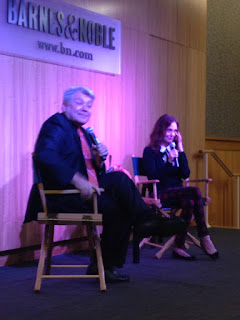 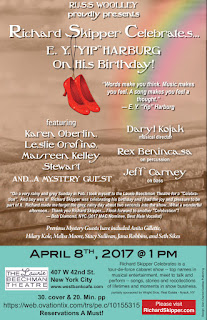 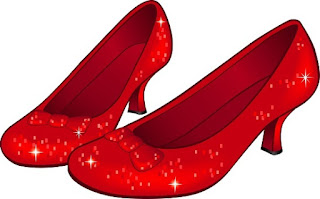 12 Days From Today!  Check out our promo video: https://youtu.be/MfRwPjs45Vc

Posted by RichardSkipper at 8:31 PM