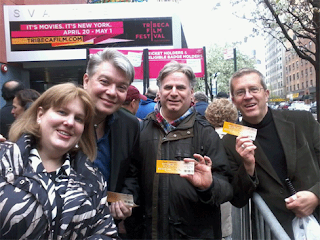 (with Patty Gay, Glen Charlow, and Danny yesterday at The Tribeca Film Festival premier of CAROL CHANNING: LARGER THAN LIFE)
The following was sent to me yesterday.
Hello, Jerry!

I have no idea who you are but THANK YOU! You made my day!!
Someone sent me this from "ALL THAT CHAT"
A documentary on "Carol Channing--Larger Than Life" premieres tonight at the Tribeca Film Festival. I'm looking forward to it. I've never seen her "live." The closest I came was seeing Richard Skipper's one-man show about her in December, which I thought was well done; if they give any kind of awards for outstanding one-person play, his show deserves consideration. He not only sang her songs, he answered questions from the audience (in character).

The following article was written by my dear friend Deborah Smith Ford. Thank you, Deborah! 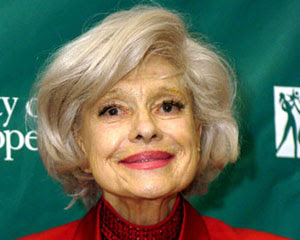 Carol Channing, 90, is a singer, actress, and comedienne who is also the recipient of three Tony Awards (including one for lifetime achievement), a Golden Globe and an Oscar nomination. She will be honored in NYC at a special event (details below). 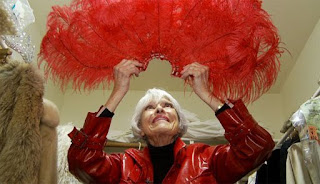 Richard Skipper, a professional tribute artist to Carol Channing, was the associate producer of the 2010 Bistro Awards in association with Sherry Eaker. 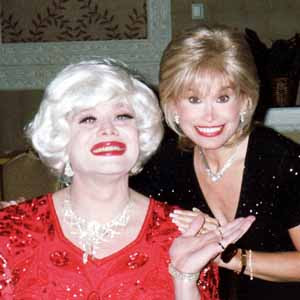 (Richard Skipper, as Carol Channing, seen here with award winning impressionist Sharon Daniels)
He will be repeating that with this year's Bistro Awards on April 26th, 2011.


Skipper was filmed and interviewed as part of CAROL CHANNING: LARGER THAN LIFE and career of Carol Channing and his close association with her.

The film, Carol Channing: Larger Than Life, opens April 23, 2011 at The Tribeca Film Festival. In February 2011, Richard debuted "To Carol Channing With Love" (now available for booking!) at Blame It On Midnight in Palm Springs. This honored Carol Channing's 90th Birthday and was a benefit for Carol Channing.

More on this special upcoming event as shared by Richard Skipper: 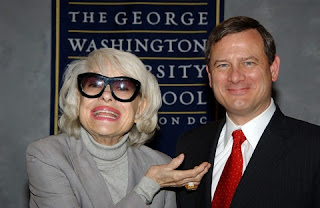 (Carol is seen here with Chief Justice Roberts in 2006)
"I’m very excited, because we are honoring Carol Channing (who is the subject of the documentary, CAROL CHANNING: LARGER THAN LIFE, premiering at the Tribeca Film Festival April 23rd. 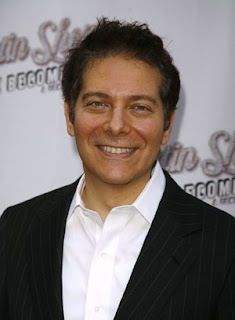 does to promote and preserve our musical heritage.

Allan Harris (Ongoing Achievement in Jazz), Carole J. Bufford (Outstanding Vocalist), bring a diversity of musical styles to their singing, and Hilary Kole is accompanied by various celebrated jazz pianists on her CD “You Are There” (Outstanding Recording), The Johnny Rodgers Band has been named Outstanding Musical Group, and guitarist Sean Harkness is being honored as Outstanding Instrumentalist.
Some of the singers and shows honored pay tribute to the past: Anthony Cochran 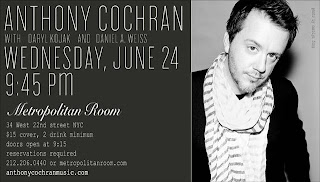 reinvents the Elvis Presley catalogue in “Elvis Lives” (Outstanding Theme Show), while Janice Hall pays homage to Marlene Dietrich in “Grand Illusions: The Music of Marlene Dietrich” (Outstanding Tribute Show).
The Ira Eaker Special Achievement Award, given to an outstanding performer on the rise, and named after Back Stage’s co-founder, co-publisher and first cabaret critic, goes to The Rescignos, brothers Robbie and Paul Rescigno...…so we are talking about major visibility by advertising with us.

The gala event will be held on Tuesday, April 26 at Gotham Comedy Club, 208 West 23rd Street. A Champagne reception for the Bistro recipients and Premium Ticket holders begins at 5 pm, followed by the awards presentation and show starting at 6:30 pm.

Producer Sherry Eaker will be hosting the annual event, along with the other members of the Bistro Awards Committee: Elizabeth Ahlfors (Cabaret Scenes, CurtainUp.com, and BistroAwards.com), David Finkle (Village Voice, The Huffington Post), Rob Lester (Cabaret Scenes, NiteLifeExchange.com), Erv Raible, Executive/Artistic Director of the Cabaret Conference at Yale University, and Roy Sander (BistroAwards.com). Eaker, who heads up the Bistro Committee, is the former longtime Editor-in-Chief of Back Stage and the producer of the event since its inception.

We expect a capacity crowd… hope you can join us as well!

I was very pleased at the response we got from last year’s 76-page COLOR program My goal is to surpass what I achieved last year. I hope that you will be a part of that. I am already excited about what I know will be an incredible keepsake! We are also seeking sponsorship! Ask about sponsorship opportunities!

Once again, the date of the event is Tuesday, April 26, 2011 in New York city. Hope to see you there!" - Richard Skipper 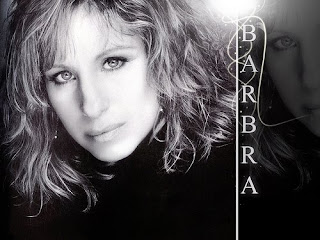 Thank you for all the gifts you have given us over the years. I truly LOVE YOU!
For Barbra's official website, go here: http://www.barbrastreisand.com/us/home
Barbra Joan Streisand (pronounced /ˈstraɪsænd/; born April 24, 1942) is an American singer, actress, film producer and director. She has won two Academy Awards, eight Grammy Awards, four Emmy Awards,a Special Tony Award, an American Film Institute award,a Peabody Award,and is one of the few entertainers who have won an Oscar, Emmy, Grammy, and Tony Award. Happy Birthday, Barbra!


The following is from my friend Josh Ellis who was Carol Channing's publicist during her run of LORELEI on Broadway: You know I don't go to the movies very often. So, while I have yet to see THE KING'S SPEECH, today I did see the new documentary, CAROL CHANNING: LARGER THAN LIFE, part of the Tribeca Film Festival.
Between the interviews with the present-day Channing, video clips that cover the past 62 years, vintage photographs ("Channing Art," as Charles Lowe used to call them), and interviews with many of Channing's friends and fellow theatre artists, we get a very happy musical comedy feast. If you are a Channing fan, it doesn't get better than this. If you are not a Channing fan you've probably stopped reading this review already.
The overriding story is her love affair with Harry, her new husband. They met as young teenagers in San Francisco and went their own way for 70 plus years. After Carol's autobiography was published, they met again and fell in love.

It's up to you to decide if you see the "real" Carol Channing in this documentary. Director Dori Berinstein doesn't shy away from the topic of Charles Lowe, Carol's husband/manager for over 40 years. Debbie Reynolds' comment about the marriage is worth the price of admission. But mostly it's a love-fest created to make you feel good. There is no dark edge, axe to grind or score to settle.
Needless to say, I adored it, as I adore Carol. What it lacks in depth is made up for in glitter.
There are three more Tribeca Film Festival screenings of the film. There is no national distribution set at this time.
Josh
http://www.imdb.com/title/tt1737122 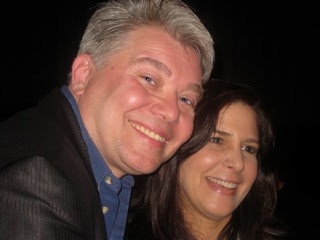 (Here I am with Dori Berenstein at the premier yesterday)
Don't forget The 26th annual Bistro Awards Tuesday night at The Gotham Comedy Club in NYC! (www.BistroAwards.com)
Please click on the banner ads on our Bistro Award site and support our advertisers.

Tomorrow's blog will profiles on the first three suggestions I receive today!