The ride: well it can be rough. Hang on tight, let go sometimes and make sure you choose the right people to take it with you. 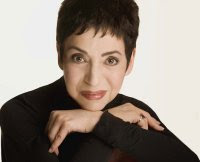 Even before I knew Sherry Eaker, I knew of Sherry Eaker. It was because of BACK STAGE, the theatrical trade paper geared to the performing artist. When I first came to New York, I used to buy the paper religiously EVERY Thursday morning.
It would be the deciding factor on how the next weeks and possibly my life would unfold. That's where I got all my info for auditions and practically everything else to do with my profession. BACK STAGE was the brainchild of Ira Eaker, Sherry's father. Sherry eventually became the editor-at -large of the paper. A few years ago, the paper changed hands and I have not bought it since.

In the late eighties, I started dabbling in cabaret. When that happened, the first thing I would read when I got BACK STAGE was BISTRO BITS, the column by the late great Bob Harrington. Bob was an integral part of the cabaret world and largely responsible for its resurgence in the 1980s. Bob loved writing about cabaret, and cared so much about what and whom he was writing.

His reviews began appearing in March 1984 under the headline "Bistro Bits", although only on a per-show basis when space in the paper allowed.
Realizing the need for additional coverage of this burgeoning industry, Sherry Eaker created an entire column dedicated to cabaret, and the first "Bistro Bits" column appeared on November 2nd, 1984.
"Bistro Bits" got an immediate and positive response. Janice Hall, 2011 Bistro Award winner for Tribute Show
"Grand Illusions: The Music of Marlene Dietrich"
Metropolitan Room, Urban Stages (Video by Corinne Cohen)

I was 18 when I first arrived in New York. When I discovered DON'T TELL MAMA, I was in heaven! THAT was the world that I wanted to be part of. I lived on 47th Street between 8th and 9th Avenues. DON'T TELL MAMA was my neighborhood hangout.

One thing that I learned early on was IF I desired to make a success of what I am working on,I would need to enlist the aid of people whose knowledge is superior to my own. Bob Harrington was that person. You see, not only did he write about cabaret artists (as a reviewer), he wrote about the craft of being a cabaret ARTIST! Notice, I used the word "reviewer" instead of "critic". I believed Bob was INTERESTED in elevating the art form rather than tearing it down.
(Sean Harkness 2011 Bistro Award winner for Instrumentalist)
For me, it was always the work. I LOVE the creative process. I love when creative people come together for the common good of creating art. When you go to see a show, the audience should never see the blood, sweat, and tears that go into a show.
Yet there are so many people who make that happen to make that person in the spotlight shine! A cabaret act needs a technical team to create its sound, look, and flow.

"I've learned how special the audience is, the feeling you get from people being right in front of you, becoming part of your act.
They tell you if they are amused or moved by your interpretation and how they perceive you and your personality."
Julie Wilson, The Cabaret Artist's Handbook by Bob Harrington, Edited by Sherry Eaker


Someone wrote to me that Tuesday night's Bistro Awards gave him a wonderful opportunity to see the best of what was being offered in cabaret today and that can be attested to by anyone who was in attendance Tuesday night. The show ran like a well oiled machine.
The BISTRO AWARD was established by Bob Harrington in 1985 in his “Bistro Bits” column in the trade weekly Back Stage, then under the editorship of Sherry Eaker. For the first few years, the awards were merely listed in Harrington’s column as notable performances he had seen during the calendar year. The first formal presentation of the awards was held in 1990 at Eighty Eight’s, a popular cabaret venue in the West Village. From there, the show moved on to The Ballroom in Chelsea, and then relocated to the Supper Club in the Broadway District, where it remained for many years. This year marks the fourth year at Gotham Comedy Club.
When Bob Harrington was alive, he knew more about what some entertainers did than they did.

"Richard, everything was amazing. It was a gorgeous, tight show. The direction was so impressive! I laughed, I cried, I had goosebumps. It was an honor to be part of such a great night! PS The after show dinner was delicious. So are you. xox"
Faye Lane, 2011 Bistro Award winner for Musical Comedy
"Faye Lane's Beauty Shop Stories"
Soho Playhouse
Trying to put together a definition of what cabaret is for a column sometime ago, then Back Stage editor-at-large and frequent boitegoer Sherry Eaker interviewed a number of that year's Bistro Award winners. Their responses were anything but a consensus, which in an all-encompassing way begins to suggest a definition — a loose and perhaps not entirely satisfying one. Cabaret can be anything that takes place in a cabaret room or anything taking place in other, larger rooms where cabaret performers participate. And that's the burden of the reviews that reflect those shows.
One of the members of the Bistro committee is Erv Raible. NYC based director, coach, publicist and consultant. Executive Director / Artistic Director of the International Cabaret Conference at Yale University, and Executive Director of Erv Raible Cabaret & Concert Artists International.
Owned and booked the cabarets and piano bars: The Duplex (1978-84), Brandy’s

(1980-85), Don’t Tell Mama (1982-89) and the legendary Eighty Eight’s (1988-99); and through these venues presented over 4000 performers to the public. Co-founded The Manhattan Association of Cabarets & clubs (president for 11 years, produced the first 9 MAC Award shows). Has written book and lyrics for Wallis & Edward: The Love Story of the Twentieth Century? and is co-lyricist for Ship of Fools: The Musical. Is directing and developing Hildegard of Bingen and the Living Light. Is developing a music documentary Silent Voices: Words and Music of the Holocaust, Hate, Hope and the Human Spirit for the Simon Wiesenthal Center.

Also on the committee is Roy Sander. Roy Sander has been covering cabaret and theatre for over twenty years. He's written cabaret and theatre reviews, features, and commentary for seven print publications, most notably Back Stage, and for CitySearch on the Internet. He covered cabaret monthly on "New York Theatre Review" on PBS TV, and cabaret and theatre weekly on WLIM-FM radio. He was twice a guest instructor at the London School of Musical Theatre. He is currently Chairman of the Advisory Board of MAC.

Elizabeth Ahlfors was born, raised and educated in New York (NYU). Her first love was always music, cabaret, and theatre – in the audience, not performing.
She writes for Cabaret Scenes, citycabaret.com, bBistroawards.com, totaltheater.com, and Curtain Up's "Cabaret Nights." She was previously Philadelphia correspondent for theatre.com and InTheatre Magazine and reviewed for the Philadelphia Inquirer, Philadelphia City News, and Spotlight Magazine. She is a member of the Drama Desk and Outer Critics Circle.

I would venture to say that most people reading this blog have probably experienced, in one way or another, the magic of cabaret, either as a member of the audience or as a performer singing in an intimate venue. 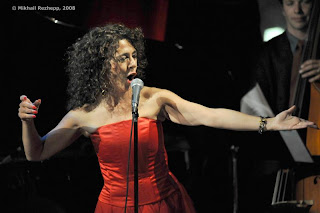 (Lua Hadar, pictured)Lua Hadar with her band TWIST debuted their CD at New York's famed Iridium Jazz Club on Broadway, May 10, 2008. The song is George Gershwin's American Songbook classic, "Soon," in an arrangement inspired by Ella Fitzgerald. Jason Martineau, music director, at the piano, with the New York band.Cabaret is a distinctive art that requires a lot of soul-searching, risk-taking, creativity, and honesty.
I would like to help you reach your goals in cabaret. "It is never too late to be who you might have been" --anonymous

RICHARD SKIPPER, critically acclaimed, multi-award winning performer, director, co-producer of the 2010 & 2011 Bistro Awards, career consultant is bringing years of experience to this workshop. The cost of the workshop is $125 for three hours. Please call (845) 365-0720 for more information and to reserve your space Richard's shows continue to be wonderful successes around the country (he recently appeared off-Broadway in Richard Skipper as "Carol Channing" in Concert), and as he continues making his business great, he looks forward to sharing his experience with others.

This workshop will focus on how to get you the attention that you need. Richard's shows have been sell-outs. Other topics will include how to use the internet to your advantage in marketing; how to get your name "out there"; cold calling; creating a contract specific to your needs; how to create a press kit that shows you to your best possible advantage and more! Richard gets a sense of the various levels of each workshop and custom makes, on the spot, a class catering to the needs of the actual group in the room. He will ascertain YOUR agenda prior to the workshop beginning so that each participant will leave with all of their questions answered, so come prepared!

Richard is also available for one-on-one consultations which afford you the personal time with him catering specifically and only to your needs.

On board with Richard is graphic designer, GLEN CHARLOW, who brings over 15 years in the business to the participants of this class and who will discuss the concept of image; how to use the internet effectively and how your website "sells" you even before you pick up the phone. To read more on Glen Charlow please visit: www.gcdtp.com.
Whether your goal is to use cabaret as a launching pad for other artistic opportunities, or simply to experience the pleasures that are unique to cabaret, the information you will receive from these workshops will help you gain a better understanding of the art and the business of cabaret, and will ultimately allow you to arrive at your destination.

For general information on workshops or Career Coaching, please contact Richard Skipper directly at 845-365-0720 or Richard@RichardSkipper.com.

(THE CABARET ARTIST'S HANDBOOK by Bob Harrington, edited by Sherry Eaker was a MAJOR source of this blog)

Tomorrow's blog will be YOU TELL ME...the first three suggestions I receive!

Posted by RichardSkipper at 7:53 AM