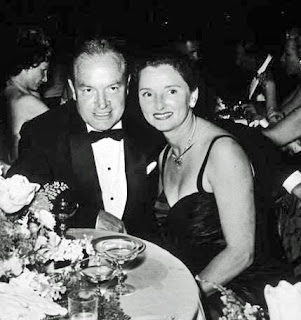 "She was the First Lady of the USO. They didn't come any more patriotic, caring or talented than Dolores." - Carol Channing (Dolly Levi/Hello Dolly!) 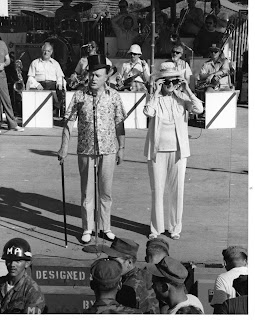 It's Tuesday, September 20th, 2011.
It has been over a week since my last blog.
I've been in busy preparations for my wedding!
Yesterday afternoon, a great lady passed on...but wow, what a beautiful long life she had. She was Dolores Hope, the widow of Bob Hope (who lived to be 100!).
When I received the email from Harlan yesterday that Dolores had passed on, strangely, I wasn't saddened.
I felt that we should all be so lucky to have such a long life.
I also felt that she was rejoining Bob Hope.
I can picture him as plain as day with golf club in hand and strains of THANKS FOR THE MEMORIES underscoring their reunion. Here is the legendary Bob Hope at the age of 91, making his final appearance in the land of his birth in June 1994. He returned to England for a final show to commemorate the 50th anniversary of the Normandy D Day landings which took place on June 6th 1944. An added bonus is to hear his talented wife Delores who appears with him. 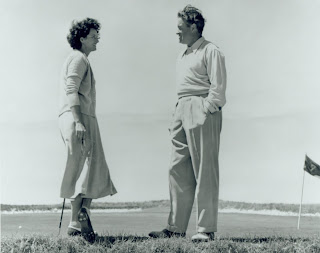 On Dolores'100th birthday, I got a group together that included Michael Austin, Maria Ottavia, Georgia Osborn, Dezar Kenna and many others and we met at CBS for the morning show in the pouring rain to sing Happy Birthday to Dolores only to be told that we could not sing Happy Birthday because of copy write laws! But we had a great time nonetheless! 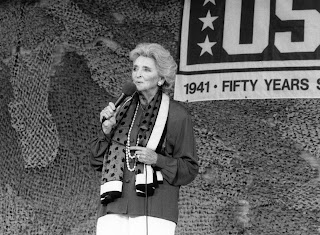 So today's a CELEBRATION of Dolores Hope! 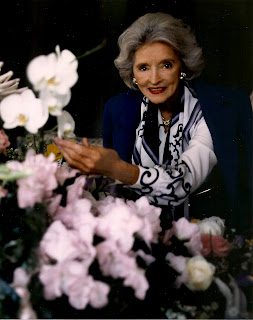 "Bob passed at 100 and Dolores at 102. Dolores once said that their longevity could be credited to laughter and they certainly had a lot of that in their lives" - Alison Arngrim (Nellie Oleson/Little House On The Prairie) 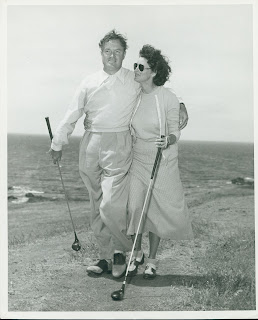 Dolores and Bob Hope had one of the most enduring marriages in Hollywood. 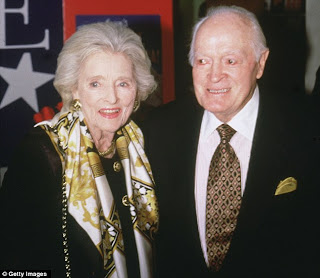 They remained devoted to each other until the legendary performer's death in 2003 aged 100. 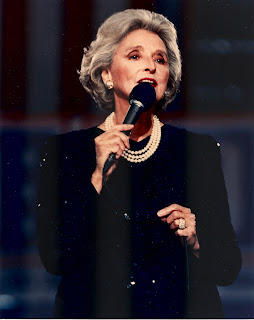 "I had such a huge admiration for both of them. The quality it takes to get just one year older, says a lot about that fact that she lived to 102. What a glorious woman and life!" - Julie Newmar (Batman)

Born Dolores DeFina in the Bronx, the pretty brunette was singing in a Manhattan's Vogue nightclub under the professional name Dolores Reade when she met newcomer Bob Hope in 1933.

"Ill never forget what a wonderful singer she was. In fact, that's how Bob and Dolores met. It seems to me that they were always laughing" - Rip Taylor (Comedian)

Dolores DeFina Hope, singer, philanthropist and wife of comedian Bob Hope, died today at the age of 102 of natural causes.

She was born in Harlem New York in 1909 and died at her home in Toluca Lake California of natural causes. Dolores Reade was singing at the Vogue Club in Manhattan when she was introduced to rising Broadway star Bob Hope. As he described it, it was “love at first song”. They were married for nearly seventy years. The Hopes moved to California in the late thirties so that Bob could pursue his film and radio careers. They built a home in Toluca Lake where she lived until her death. Bob and Dolores adopted four children and Dolores became an advocate for adoption, serving on the board of Holy Family Adoption Services in Los Angeles. She was a lifelong Catholic and a proud member of St. Charles Borreomeo Church in North Hollywood, where she gave much time and financial help over the years to various parish causes including the building of the Lady of Hope chapel and the Holy Family Social Service Center. Throughout her life Dolores was devoted to Catholic causes especially those directly benefiting the poor. 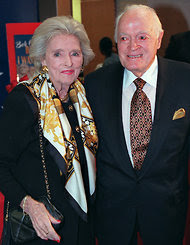 She and Bob were members of Lakeside Golf Course where she was runner up to the women's club champion for several years. The Hopes also had a home in the Palm Springs area since the mid forties; Dolores worked with renowned architect John Lautner designing their most recent home in the Southridge Estates. The house quickly became a showplace and a venue for their various desert social and charitable events including parties in conjunction with the annual “Bob Hope Chrysler Classic.” Dolores was founding president of the Eisenhower Medical center in Palm Desert and was intensely involved in the building and décor of the hospital. From 1968 to 1976 she served as President of its board and since 1977, its Chairman becoming Chairman Emeritus in the nineteen nineties.Though she accompanied her husband on many of his USO trips to entertain the troops usually closing the show with a touching rendition of “Silent Night” she really had put her singing career on hold to be at his side and to raise their children. But at the age of eighty-three she revisited a long postponed singing career, recording several albums and performing with Rosemary Clooney in New York at “RAINBOW AND STARS” for several weeks and receiving rave reviews. Throughout her life Dolores was a gracious hostess and great asset to her world famous husband. She made her last visit to the servicemen and women during “Operation Desert Storm” Performing “White Christmas” from the back of a truck in the middle of the Saudi desert. She was eighty-four at the time. 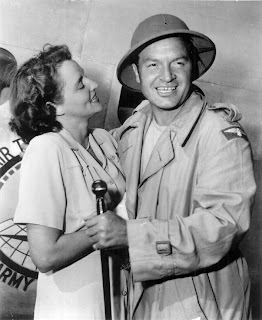 Dolores Hope was feted with six honorary degrees and many awards for her humanitarian efforts, including: The Lifetime Achievement Award for Humanitarian Services by the National Italian American Foundation; the Ellis Island Medal of Honor (for her contributions Irish heritage); the Magnificat Medal (1987) from Mundelein College, Chicago, for her outstanding family, social, philanthropic and religious leadership; the Big Shoulders Humanitarian Award; the St. Martin de Porres Award from the Southern Dominican Foundation, New Orleans (1990); “Bob Hope 5 Star Civilian Award,” at Valley Forge Military Academy; “Sprit of America Award” from the Institute for the Study of Americans, for community service and commitment to her country; “Living Legacy Award” for humanitarian efforts in San Diego; she participated in the dedication of the Dolores Hope All Faiths Chapel in Ft. Walton Beach, Florida, at the Air Force Enlisted Widow's Home in Bob Hope Village. In 2001 she was honored by the American Ireland Fund for a lifetime of work benefiting Humanity and presented with a beautiful Waterford Harp.Dolores Hope has been the Honorary Mayor of Palm Springs five times and named “Woman of the Year” by the Los Angeles Times. In 2008, she was honored in by the Ladies Professional Golf Association with its Patty Berg Award for her contributions to women's golf. Like her husband she was an avid golfer. 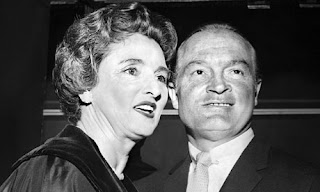 Services are private and burial will be at the Bob Hope Memorial Garden, San Fernando Mission - next to Bob.
According to legend, Hope decided he'd marry Reade after hearing her sing It's Only a Paper Moon, and did just that a year later on Feb. 19, 1934. 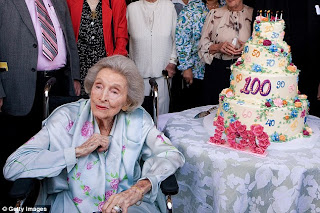 When huge fame came calling for Bob, he gave something back by entertaining American servicemen overseas for the USO – frequently joined by his capable wife.

She began accompanying Hope on his Christmas trips to entertain U.S. troops.

In 1966 she sang Silent Night to hushed thousands of GIs who then rose and gave her a thunderous ovation, many with tears in their eyes. 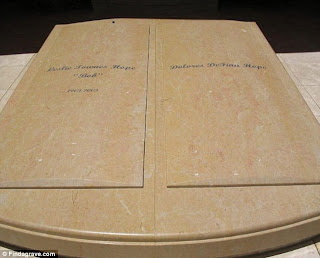 In 1990, Mrs. Hope accompanied Bob on his last Christmas visit to American forces, visiting troops who were in Saudi Arabia for Operation Desert Storm. Marie Osmond, Ann Jillian and the Pointer Sisters did not perform, to avoid offending Saudi sensibilities about women entertainers. 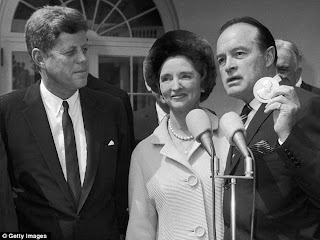 Recognition: Dolores beams as Bob receives a gold medal for service to his country in the pursuit of world peace at the White House in 1963

She only cut back on her travels to raise their adopted children Tony, Linda, Kelly and Nora, and soon became immersed in charity work.

Bob still traveled regularly, while she worked on their home in L.A and their estate in Palm Springs, where the couple indulged their passion for golf and helped fund local medical centers.

Indefatigable as always, Dolores resurrected her career in her late 80s, releasing Dolores Hope: Now and Then, she followed this with three additional albums and also recorded a Christmas CD with Bob entitled Hopes for the Holidays. 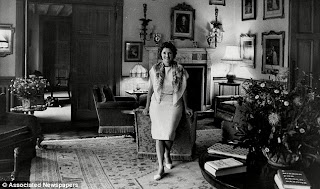 She even joined her friend Rosemary Clooney, aunt of George, on stage at the Rockefeller Center. 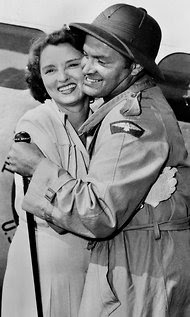 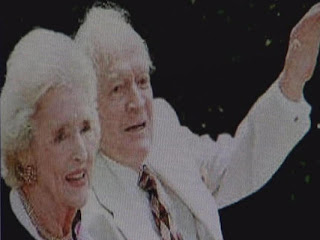 Last year as she approached her 101st birthday, she joked: 'I’m still recovering from my 100th birthday bash, so I’m going to keep this year’s celebration much quieter.' 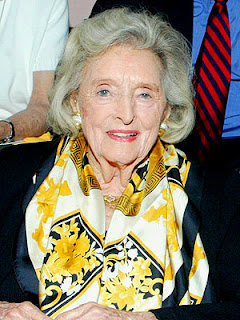 Her beloved Bob died in 2003 and is buried in the San Fernando Mission Cemetery, Dolores already has the plot beside him inscribed for herself.

By the time of her death, Dolores from the Bronx had seven honorary degrees, a street named after her and a star on the walk of fame. 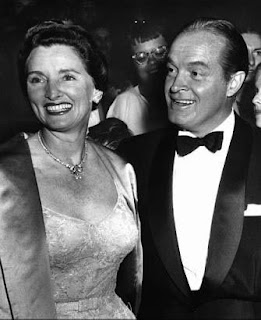 "Thanks for the memories, Dolores. Eternal happiness with Bob in Heaven."
Roxanne Rivera Labato Bailey

Melt butter or margarine; blend in flour, paprika and pepper. Add milk; cook over low heat, stirring constantly until thickened. Add consommé, just as it comes from the can. Add cheese; stir until melted. Add remaining ingredients, salting to taste. Serve at once. Yield: 8 to 10 servings. 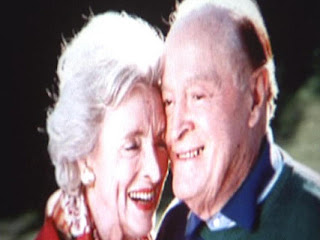 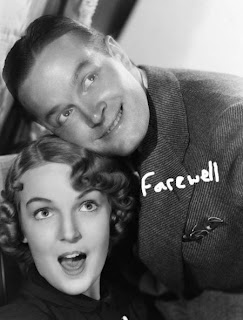 Check out Tommy Garrett's tribute to Dolores in Canyon News

Thank YOU, Dolores, for the memories!

Thank you Harlan Boll for many of the details of this blog.

Tomorrow's blog will be about...YOU TELL ME! I'm open to suggestions! I'm seeking a video question for tomorrow!

Vote for me to get my own billboard in Times Square at www.About.me/RichardSkipper