Jack Dyville arrived in NYC at age 23 fresh out of Grad School, and within 2 weeks was hired as a dancer for the Ballet Corp at Radio City Music Hall. While dancing at the Music Hall, his three fella dancers in the Ballet corp attended the AEA auditions for Hello, Dolly! and came back and told him a non-AEA call was being held the next day and he needed to run there between shows - he did and the rest is history -

Within 2 months, he was hired as "Swing Boy" for the National bus and truck tour of "HELLO, DOLLY! " with Yvonne DeCarlo and given his Equity Card.
"Let me tell you, I was On Top of The World!" The tour went into rehearsals in December 1968 and played until May 1969.
As swing boy, Jack didn't have his own track but learned  the 12 male dancer spots - yet the fabulous/wonderful Jack Craig who re-staged the show and performed as dance captain allowed him to rehearse and do his track for the Opening Week. How exciting as a new AEA member to travel to the Shubert Theatre in New Haven - a place he grew up hearing about as a popular out-of-town opening city. The theatre was beautiful - they stayed in the hotel attached and he just loved being a Professional Chorus Dancer!!! Finally. 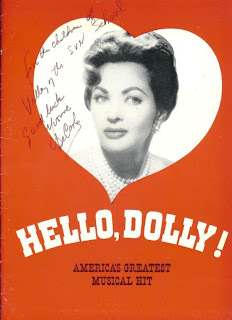 They rehearsed for three and a half weeks he thinks - after all this was 44 years ago. OMG!
Ms. DeCarlo and Jack were both a part of this production the entire 6 months.
Yvonne deCarlo was the only Dolly that Jack ever appeared with.
Ms. DeCarlo was a beautiful woman, so for Jack, seeing her coming down that staircase in that gorgeous red gown was her Best Moment in the show!
Unfortunately, Ms DeCarlo was distant to the cast and seemed shy, intimidated by doing a musical (as this was prior to 'Follies') and insecure.
I have heard this from many that I have interviewed. I also know from speaking with deCarlo's son that there were many issues with the handling of this company by the producers, William Fisher, Budd Fillipo, and Ken Gaston. These will be dealt with in upcoming chapters of my book.  The bottom line is Mr. Merrick gave them the licensing rights and never had ANY involvement with that company! He never even saw it!!

Jack regrets that he never met Gower Champion and is not sure he ever saw their company! 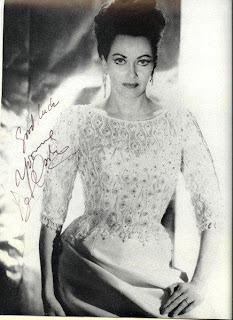 Jack only wishes he had met him for he has been one of Jack's idols as a Choreographer-Director and though never having worked with Gower, he has shaped Jack's career in those directions.
Jack was never ready for the show to close - it was such a growing experience for him and I loved being on the road at that age! What could have been better? He was doing what he loved and getting paid, which at that time seemed like a lot. And he guesses for 1968 it was... again memory doesn't let him recall but he does know that his best friend on the tour, bus seat partner and roomie, Ann Marie Draper taught him that he could save at least $100 a week while on the road. That was a Lot! IT WAS!
And though the end of the tour and show was a let down, he had the joy of knowing he was going off to do summer theatre in the chorus at Wichita Star Theatre in June. In fact, Ann Marie and Jack were both hired while on the road with Dolly and playing Wichita.
Does not remember at all how it came about but he guesses Frank Kenley saw them in the show and offered us summer contracts.
So, more work came immediately from Hello Dolly - how can one cry over that?
Jack's favorite moment in the show was doing The Waiter's Gallop, although he was always nervous no matter which track he was doing - it was so intricate and complicated etc and at the end the jump section was just a little different count for each dancer -- so he really had to think each night and be on his toes.

But what an overall rush to know that the Chorus Boys stole the show!!! Oh yes, the female dancers were jealous. LOL

Although Jack was so grateful to have had the opportunity, he learned HE NEVER wanted to SWING a show again!!!
But, it did give him confidence to move forward with his goal of being a Director-Choreographer, something he had wanted since the age of 5.
Armed with all the original choreography and blocking, he was able to move into summer stock gigs re-creating Dolly! And then, quickly moved into doing other shows and have basically been directing-choreographing since 1970.

As I have noted, Jack was Swing boy - didn't really have his own track and for some unknown reason never rehearsed the role of Stanley (played by then unknown future Tony Winner, Sammy Williams - "A Chorus Line"). 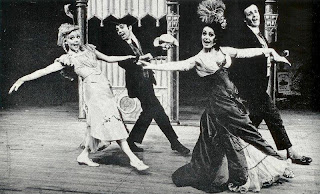 As most people know there is a ramp around the orchestra pit - (In fact several Dollies have been known to fall into the pit - luckily protected by a net).
Well, Jack can happily report Ms De Carlo never fell but one night when going on for Sammy for the first and he thinks only time - he, as Stanley JUMPS the Pit very close to the middle to greet her with "Hello!!!" Nervous and afraid, he jumped way to soon, landing on Ms. De Carlo's dress train before she got to center. 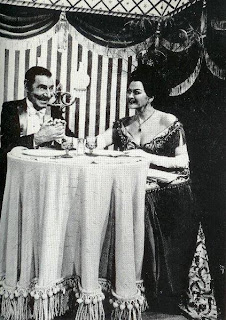 Yikes, he guesses it scared them both. But, after the performance, the stage manager called him to his desk and said Ms. DeCarlo had requested he be removed from the show for 2 weeks. He was devastated. He apologized and for some reason, that is where this tale ends... he has no recollection of what was said. But he traveled around the country for 2 weeks with the company as always but never went on - guess there was no call for the swing, doesn't remember. But it was a horrible experience and he felt like 'the little Bad Boy!' The other cast members were so supportive however. Luckily it was almost 2 weeks to the day, when they played his hometown of Fort Worth, Texas and all the guys let him do their most exciting parts throughout the show - Jack never went on as Stanley but did not do the orchestra pit Jump!!! That was so exciting being able to do so much at home. In fact, one of the FW newpapers said in the review, "Hometown boy, Jack Dyville was center stage for a big part of this exciting dance show!"

I asked Jack if he has seen anyone else play Dolly. 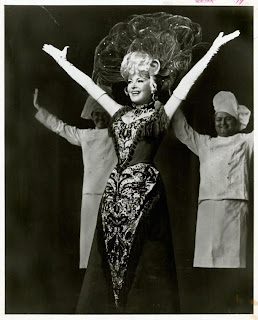 He saw Betty Grable in Fort Worth at the very same theatre they played while he was still a college student. She was breathtaking as was the show. At the time, he never imagined he would be doing the same show on tour at the same theatre within 3 years. He grew up at Casa Manana, America's First Permanent Theatre In The Round so honestly Grable and Dolly was his first Big Show with full sets on a Procenium stage to witness. He was in awe of her performance, the dances and the magnificence.
Jack's thoughts on Jerry Herman?
Another genius I never met but oh his music moved me in Dolly! Excited me!!! In fact I love all his brassy-show biz work!
Describe the first time you heard the score (if you can) 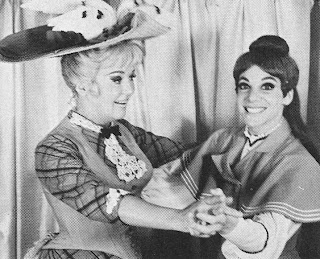 I guess it was with Betty Grable! Cause I do remember getting the album soon after. But I also remember having rehearsed that DeCarlo tour to a piano and then hearing the orchestra for the first time - what I do not recall however was if it was in New Haven or at the gypsy runthrough at The St James in NYC. I think tech/dress in New Haven.
What one major change have you seen in the industry since you first did Dolly?
I suppose Dolly was one of the first shows to feature a dance ensemble that also did all the singing. That continued through  A Chorus Line but seems we went the other direction for awhile in the 80s-90s using primarily legit voices. And seems we have gotten away from most of the old-fashion musicals like Dolly that are just presented to Totally Entertain. 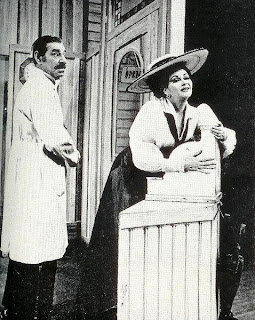 Being Entertained? Is that a bad thing?
Who have you seen play Dolly?
Ruta Lee - Betsy Palmer - staged Diane Findlay! And several other lesser known women!
Your thoughts on all named?
To be honest, like Will Rogers said, 'Never Met A Man I didn't like!' I guess I really 'never saw a DOLLY I never Liked!' Each had something to give because the role is fool-proof -- a delightful story, fun dialogue, a likeable if 'exasperating woman' with wonderful lyrics and score.
Please add anything you would like to add for the commentary of the book.
I do believe HELLO DOLLY! is a National Treasure, a musical loved by not only the thousands of performers who have been in a production somewhere but it is a musical for the generations. My one wish, though the original was Superb - I would enjoy seeing a new Broadway revival that did not cash in on the magnificence of Gowen Champion and go for a totally new approach - an updated rendition of the classic with the polish of 2012 that keeps alive the innocence that was and is Dolly of the olden days. 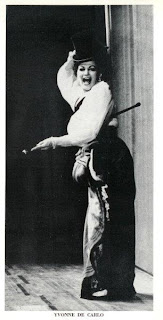 Let's start another long run with current Broadway and Movie Stars falling in line to keep the tradition of this icon alive. I personally would like to CALL ON - Betty Buckley, Meryl Streep, Bernadette Peters, Megan Mullaley, Beth Leavel, Debra Messing, Glenn Close, Jan Maxwell or even RuPaul or Richard Skipper!!!


Tomorrow's blog will be..Marilynn Wick and the Broadway Collection at Costume World

Sign The Petition!
TILL TOMORROW...HERE'S TO AN ARTS FILLED DAY
Richard Skipper, Richard@RichardSkipper.com
This Blog is dedicated to ALL ARTISTS: Past, present and future and the gifts they give to the world! I WANT YOU TO SUCCEED!

Posted by RichardSkipper at 5:36 PM