The Show Must Go On!

"The free, exploring mind of the individual human is the most valuable thing in the world." ~John Steinbeck


So what's new?
Here in New York, as it is in the rest of the world, there is a constant ebb and flow in the world.
A few days ago, I saw an article in The Huffington Post in which critic and writer David Finkle posts the question,  “Live Theater”: As Opposed to What, Dead Theater?"
The Broadway League release arrived with the headline:
"Empire State Theatre Production Tax Credit Approved
New York is Now the Fourth State to Offer Tax Benefits
for Investing in Live Theatre."

The good news has already been reported elsewhere, and I’m not writing about it now because I have any reason for objecting to a government initiative that increases theater-related business in the state where the nation’s theater hub is situated. I see nothing wrong and everything right in a condition that retrieves theater-related business that had been lost to other states where tax credit has previously been established.

When I arrived in New York in 1979, there were over 175 professional summer stock theatres in operation.
Some of those theatres no longer exist. Now, there are less than 25 operating on the same paradigm that was in existence at that time.

Dinner theatres have pretty much gone the way of the drive-in movie theatre. There ares very few left. Broadway has become Las Vegas east.
It is SO EXPENSIVE to produce on Broadway now. It is just as expensive to attend. Don't take lightly the expression, "Live Theatre".
We need to embrace, nurture, and celebrate and we all need to do this together...otherwise, it WILL be Dead Theatre!
Today, I celebrate LIVE THEATRE!
Lucie Arnaz will be at The Carlyle April 15th-19th NYC  Seating is limited. Reserve TODAY

Jay Leno, Tom Cotter, and Lucie Arnaz will be in Jamestown NY for Lucy Comedy Fest!
Find out who else will be there.
Lucie Arnaz has had an extremely diversified career spanning over forty-five years in show business. She has starred on the New York stage in THEY’RE PLAYING OUR SONG (Theatre World, LA Drama Critic’s and Outer Critic’s Circle Awards), LOST IN YONKERS, and DIRTY ROTTEN SCOUNDRELS, Grace and Glorie; in the London premiere of THE WITCHES OF EASTWICK; in the Coconut Grove Playhouse premieres of ONCE REMOVED and A PICASSO; in First National companies of SEESAW, WHOSE LIFE IS IT ANYWAY?, SOCIAL SECURITY, and MY ONE AND ONLY (Sarah Siddons Award); and in regional theatres in WONDERFUL TOWN, MASTER CLASS, 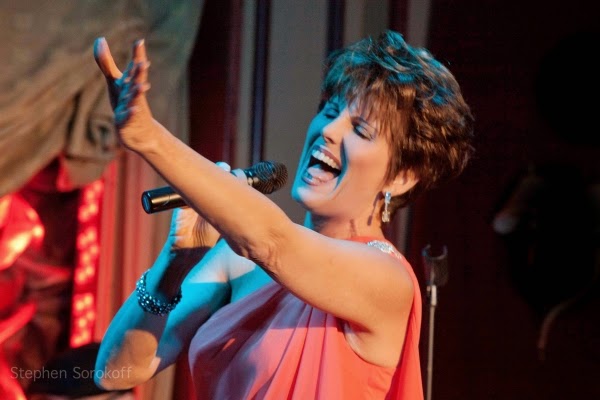 Cabaret, THE GUARDSMAN, ANNIE GET YOUR GUN, I DO! I DO!, EDUCATING RITA, VANITIES, and MACK AND MABLE to name just a few.

Stephan will be appearing at The Ziegfeld Society to discuss Erte and his contributions to The Ziegfeld Follies and various revues of that time. Check out my blog from yesterday.

Seating is Limited. Reservations a must.
Doors open at 7PM for Networking Mixer/8PM Interview start time.
Join Jeffrey Gurian and  myself as we sit down to discuss bullying in comedy and social media.
Jeffrey Gurian: comedian, writer, director, actor, host, interviewer, Friar, doctor, and nightlife icon.

According to Ted Alexandro, "Jeffrey knows everyone in comedy and everyone in comedy knows Jeffrey."
He brings comedy to celebrity interviews by day and "jumps around" the New York club scene by night.  As Macio says, "They should give that guy his own show!"

Jeffrey and Richard will sit down to discuss Jeffrey’s career and the journey it has taken him to this point and comedy and how it has “evolved” and changed over the years.
RODNEY DANGERFIELD began using some of Gurian’s material on Johnny Carson’s Tonight Show. One night, after his standard, “I’m all right now, but last week was rough” introduction, he opened with Gurian’s line: “Just last week, I bought one of those whirlpools for my bathtub.
The first night I used it, I lost three of my best ships,” and that started the ball rolling for Gurian.

Later on, he used more of Gurian’s material on his album, No Respect. Wicked, woeful . . . the laughter, the 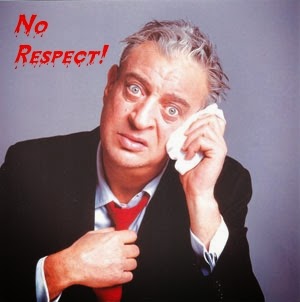 Since that time, Gurian can lay claim to having heard his lines uttered by literally some of the biggest names in the entertainment world, among them: JOAN RIVERS, PHIL HARTMAN, RICHARD BELZER, GILBERT GOTTFRIED, GEORGE WALLACE, Robin Williams, PAULY SHORE, DICE CLAY, MILTON BERLE (who was also his sponsor in The Friars Club), RICH LITTLE, DICK SHAWN, PAT COOPER, JAN MURRAY, FRANK GORSHIN, JIM MORRIS, HENNY YOUNGMAN, JERRY LEWIS…and those are only the comics!
Jeffrey will be telling his story in interview fashion to Mr. Richard Skipper. No stranger to the greats in the entertainment world, under the banner of Richard Skipper Celebrates! has rubbed elbows, chatted up and interviewed theater, film, television and cabaret greats for the past two decades running.
His most recent interview with Sondra Lee (Original Minnie Fay of Hello, Dolly!), was met with exceptional reviews in March, 2014. Known for his hands on approach to the individuals he is working with, look no further than Richard Skipper Celebrates!
I have conducted over 700 interviews for this blog celebrating people in the arts.
In January of 2014, Richard brought cast members together from the original cast of Hello, Dolly!, and the companies led by Miss Carol Channing for a two day special event in New York. He has conducted on-stage interviews with Julie Budd, Carol Channing, Eileen Fulton, Jackie Joseph, Sondra Lee, Tommy Tune, Ron Young, Peggy Pope and more. Tickets are $30.00 each. Reservations can be made by calling 845-365-0720.

The Spiral Theatre Studio is the premier incubator theater for off-off-Broadway plays, focused on the stories of characters grappling with issues related to growing older in a culture disrespectful of aging.
Their Salt and Pepper Series promotes greater awareness of issues about the grace and grit of seasoned citizens.

Each of their four annual main-stage productions by established and emerging playwrights features a weekly Industry Night and performs on their innovative "Spiral Stage" that provides an emotional landscape for these poignant plays. They are proud to use environmentally conscious, green technology (low carbon footprint, LED lighting) for these showcase productions.

This, is for you Richard,  as I feel I must say this…I have known you as a wonderful theater person, a great cabaret performer, a man of many talents..but there comes a time when all those things you are, that we indeed know so well,  are topped !!!
How? one may ask? I shall tell you.
There aren't many who have the generous gift of grace, awareness,respect, for the work that has been done by others..For someone as young as you are in terms of the road you have already traveled, and will continue to do so..I must thank you for presenting me with a glorious evening in MY HONOR!  Wow what a surprise you gave me!  I had forgotten so many things I had done..but you had not!  you even did some research!  you  left me feeling Loved and remembered as an ARTIST!
Thank you ,  from one artist to another…..  Thank you,  Sondra (lee)

Irma La Douce is coming to Encores! Artisic Director of Encores is Jack Viertal! If any of you reading this know Jack, I would LOVE to interview him. JACK VIERTEL, Artistic Director of Encores!, is also the creative director of Jujamcyn Theaters, in charge of creating and identifying new projects for the company's five Broadway theaters. Current and recent productions include Doubt, The Producers, Jersey Boys, Sweeney Todd, Proof, Gem of the Ocean and The Wedding Singer. He has helped shepherd five of August Wilson's plays to Broadway, worked on Angels in America, Into the Woods, and M. Butterfly, among others. He conceived and co-produced the long-running musical revue Smokey Joe's Cafe, served as dramaturg for The Wedding Singer and Hairspray, and is the coauthor of the musical Time and Again. He spent two years as dramaturg of the Mark Taper Forum in L.A., and began work in the theater as a critic for the Los Angeles Herald Examiner.

According to Playbill.com, A Night with Janis Joplin, which had been scheduled to open April 10 at the Gramercy Theatre following its Broadway engagement, has postponed its reopening indefinitely due to production issues, according to a production spokesperson. 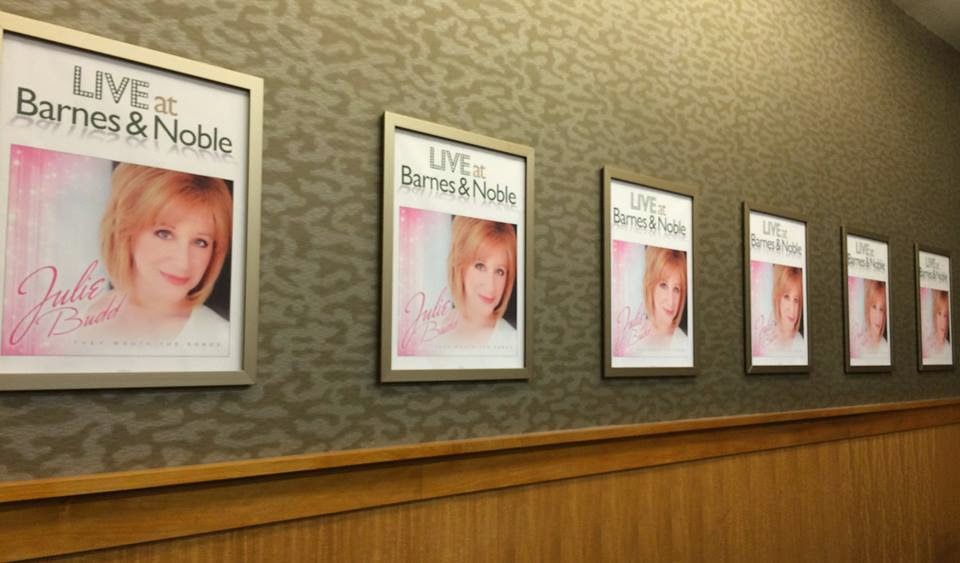 Look what has just been released !!
The incomparable Julie Budd...talented and beautiful as ever.
The Julie Budd "wall" is up at Barnes and Noble for the April 28 show!
April 28th, 6:30pm

In-store, in-person presentation and concert at the Barnes and Noble store at 86th Street and Lexington Avenue in New York City.  Julie will be bring in the entire band to play, doing interviews and hosting a Q and A with the audience, plus signing  CDs!

Inventing Mary Martin, York Theatre is the World Premiere multi-media celebration of the life and career of one of Broadway’s greatest stars.  Mary 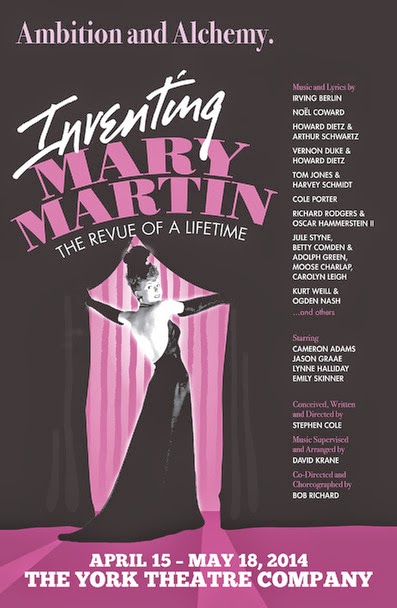 Martin created leading roles in One Touch of Venus, South Pacific, The Sound of Music and Peter Pan and became one of the most glamorous and beloved star of the American musical theatre, constantly reinventing herself along the way.
In this "revue of a lifetime', four fabulous performers, none of whom actually plays Mary (who could?) take us on her amazing journey from naive but ambitious Texan to Hollywood star to Broadway legend.
Conceived, written and co-directed by award-winning musical theatre writer Stephen Cole, with musical arrangements by Broadway and film veteran David Krane, Inventing Mary Martin shines a spotlight on the magic that is Mary Martin. Featuring
CAMERON ADAMS
JASON GRAAE
LYNNE HALLIDAY
and EMILY SKINNER
Imagine Side by Side by Sondheim meets Ain’t Misbehavin' with songs by Cole Porter, Rodgers & Hammerstein, Kurt Weill, Jule Styne, Jones and Schmidt and other musical giants of the Golden Age of Broadway; Inventing Mary Martin takes us back to a time when stopping the show with a saucy but innocent striptease in “My Heart Belongs to Daddy” could turn a novice into a legend.

Let's start celebrating artists again rather than tearing them down.

Thank you ALL of the artists mentioned in this blog for the gifts you have given to the world and continue to give!

A Testimonial from Richard Skipper's most recent event
Richard - What a wonderful experience it was working with you at Pier 701 Saturday night (4/5/14)!
It was a remarkable, successful evening!  I thought the show was terrific, the cast was amazing and the flow was perfect!  Not to mention your natural talent to keep the audience completely captivated for the entire show from start to finish!
Bravo, I look forward to working with you again soon!
Tim McGrath,  http://www.neilberg.com


Check out my site celebrating the FIRST Fifty years of  Hello, Dolly!


I desire this to be the definitive site for all things Dolly!  If any of you reading this have appeared in any production of Dolly, I'm interested in speaking with you!
If you have anything to add or share, please contact me at Richard@RichardSkipper.com. 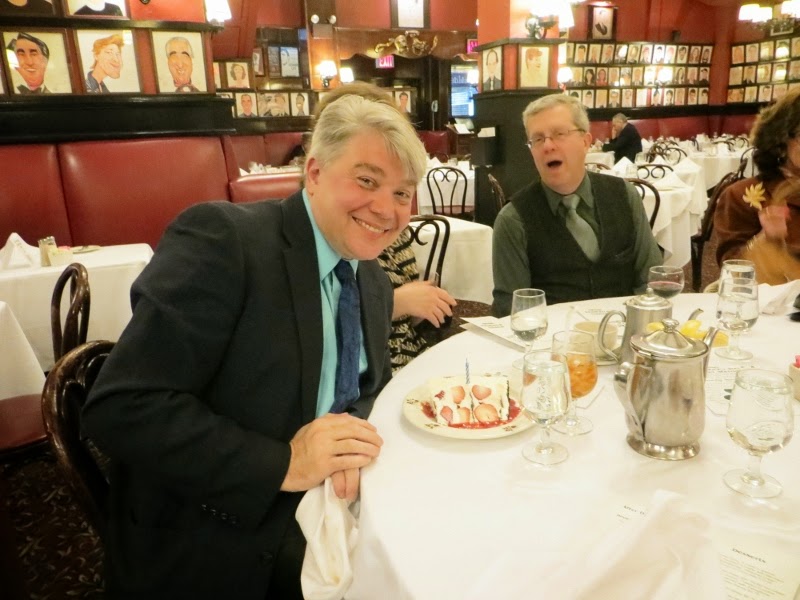