If He Only Had a Heart! 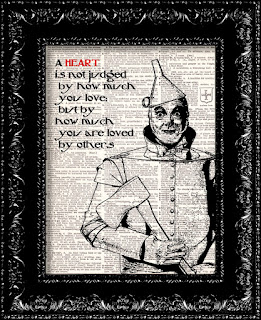 Happy August 7th, 2016!
August 7 is the 220th day of the year. There are 146 days remaining until the end of the year.
It is a gorgeous day here in New York as I sit down to write today's blog.
I am listening to My Favorite Year in the background.
When I read the paper this morning, something popped out that gave me the idea for today's blog.

I want to sub tite this blog: Don't pay attention to that man behind the Curtain. He is pulling all the levers and blowing a lot of smoke and people are shaking at The Great and Mighty Wizard of Oz! Today, I'm looking behind that curtain.

Look at this: On this date in 1782, George Washington created the Order of the Purple Heart, a decoration to recognize merit in enlisted men and non commissioned officers.
This past week at a rally for Donald Trump, a Trump supporter showed his support by offering Trump his Purple Heart.
One of the biggest challenges that I have to deal with on a daily basis is putting my value system on others. I get that for every like or dislike I have, there are many who don't act or think as I do. 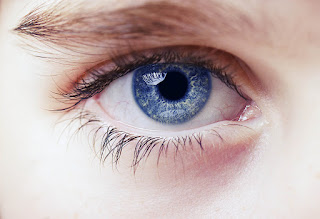 I cannot see into Trump's heart. I don't know what his thought processes are. All I know is what I see. If it had been me, I would have said, "Thank you, kind sir, but I have not earned this."
To say he has always wanted one, that this was so much easier proves that he has no idea no of the reverence or importance of this. Click HERE.
However, Trump is Trump.
As a matter of fact, early on in Trump's campaign, Trump's campaign manager, Corey Lewandowski, said Let Trump Be Trump.
When Trump first announced his candidacy, many said it was a publicity stunt and would go no further. Then, he filled out the proper paper work, and then in June of last year, we saw him and Melania make their entrance down the escalator of Trump Tower and into the world of politics, the reality TV show CELEBRITY has manipulated a campaign with the brilliance of a television mogul.
Trump has spent a lifetime playing Trump and their have been many casualties along the way from what we've seen and heard daily in our news cycles. Day One, Trump tells us that he is going to build a wall and that he was going to keep Mexicans (who he called murderers and rapists) out of the country. He was also going to keep Muslims out of this country. He revealed himself to us on the first day he announced he was running. 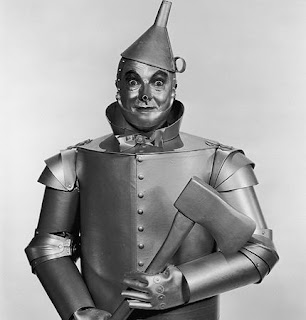 There were rumors that the "supporters" that were there were hired actors.
As "outraged" as the media and most sane people seemed to be, there were and are an equal number who feel the same way as he does and have hung on to and cheered every bigoted and/or racist or sexist remark.
This continued throughout the campaign. Les Moonves said, "He may be bad for the country, but he is great for ratings." There you have it! This entire campaign has been based on ratings. He came up with nicknames for each of the candidates and each time he referred to those candidates, he used those names. I might expect that from a fifth grader running for the student body council, but a man or woman running for President of the United States?
It didn't matter. Each time he did it, his numbers 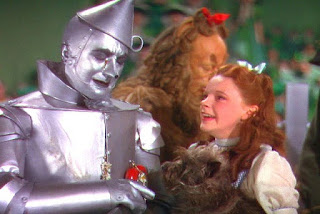 continued to rise within "his party" which speaks volumes about the world we live in.
As he began to eviscerate every other candidate in his party, his bravado got bigger and more pronounced. Again, it was about the ratings. It was not about the party and it certainly isn't about the citizens of the United States, it was about his ratings. He was constantly talking about the number of votes he was getting, how many people were showing up at his rallies, and how he was dominating the polls.
The more outrageous he became, the more the media covered him. If he didn't lead the news cycle on any given day, due mostly to some tragedy in

the world, he would send a tweet to MAKE it about him. He even made the Orlando Pulse Massacre about him by saying Thank you to the many who had congratulated him for calling it.
He can call any radio station, television station, or newspaper, and they will stop EVERYTHING to give him a platform. It is not because of any worthwhile news, it is because of the outrageousness of what he says. 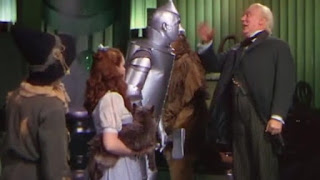 The media has played into this. This IS "reality" television and everyone is watching.
Even before this man ran, we had to deal with this silliness: “An ‘extremely credible source’ has called my office and told me that Barack Obama’s birth certificate is a fraud"

“Look at that face! Would anyone vote for that? Can you imagine that, the face of our next president?"
— Trump says of opponent Carly Fiorina in a September 2015 interview with Rolling Stone. He later backtracked during the GOP debate saying: "I think she's got a beautiful face. And I think she's a beautiful woman."

One of the key problems today is that politics is such a disgrace, good people don't go into government. Donald Trump


When Donald Trump announced he was running for President a year ago (it feels like it’s been a decade at this point), the world of late-night political satire was filled with excitement. Jon Stewart was so thrilled at the possibilities of mocking a Trump campaign that he seemed disappointed that it was happening just as 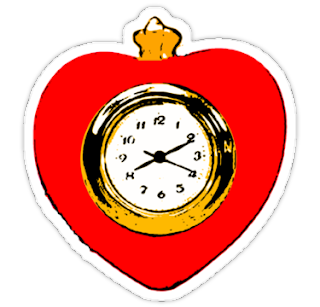 he was leaving the fold. Sure enough, Trump delivered, giving his would-be critics plenty of fastballs right across the plate. In the speech where he declared his candidacy, Trump famously bragged “I’m really, really rich,” and more seriously, he claimed that Mexican immigrants were rapists. This is just one of multiple speeches where Trump has said outrageous things, which the likes of Larry Wilmore, John Oliver, and Samantha Bee have gone in on. There’s just one problem: has making fun of Donald Trump become a bit too easy? (Read MORE)

Q: Your critics say your campaign platform is inconsistent with how you run your businesses, noting that you've brought in foreign workers instead of hiring Americans. 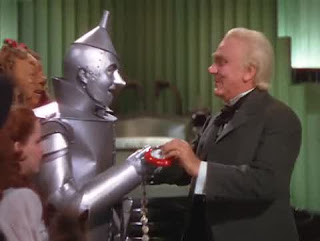 Why should voters trust that you will run the country differently from how you run your businesses?

Donald Trump may not be a klansman or American nazi, but he's certainly number one with them. (Read MORE)

Read This: An Open Letter To Ivanka Trump, From One Daughter To Another (Source: The Huffington Post) 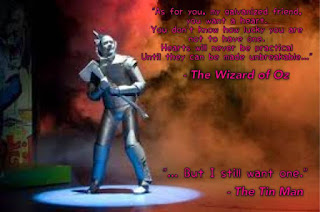 Trump later says he was referring to Kelly's nose.

The same day, prominent conservative Erick Erickson disinvites Trump from the RedState Gathering, a three-day event full of hundreds of GOP activists, elected officials, and journalists. Event organizer Erickson—who has his own issues with misogyny—writes on his website that while he thought Trump was being treated unfairly by the Republican Party, his comments about Kelly were too much. "There are just real lines of decency a person running for President should not cross," he writes. "His comment was 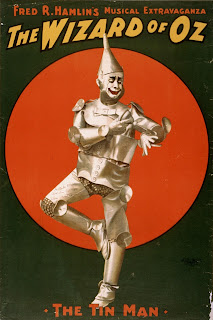 December 7th, 2015
(New York, NY) December 7th, 2015, -- Donald J. Trump is calling for a total and complete shutdown of Muslims entering the United States until our country's representatives can figure out what is going on. According to Pew Research, among others, there is great hatred towards Americans by large segments of the Muslim population. Most recently, a poll from the Center for Security Policy released data showing "25% of those polled agreed that violence against Americans here in the United States is justified as a part of the global jihad" and 51% of those polled, "agreed that Muslims in America should have the choice of being governed according to Shariah." Shariah authorizes such atrocities as 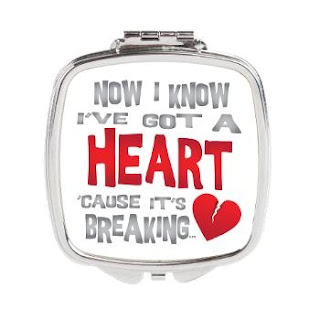 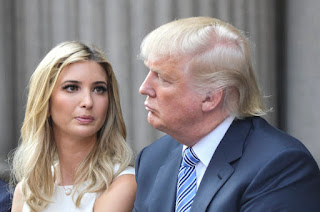 April 7th, 2016
(CNN)Donald Trump met Wednesday with GOP strategist Paul Manafort, a huddle that suggests campaign changes could be in the works after the billionaire lost the Wisconsin primary and is facing an uphill climb to clinch the Republican presidential nomination before the convention Read MORE

June 7th, 2016
(Trump.news) He’s calling them out and they don’t like it: The German ambassador to NATO has fired back at prospective GOP presidential nominee Donald J. Trump for his comments that most NATO countries (including Germany) are not contributing their fair share to the defense alliance, relying instead on the American taxpayer. 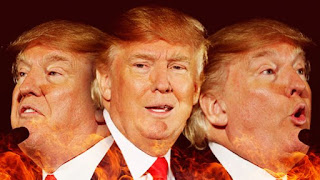 July 7th, 2016
This week’s Brody File show is all about “The Donald.” The GOP presidential frontrunner talks with The Brody File at his golf course in southern California where we discuss God, politics, the Supreme Court, religious liberty. (SEE HERE) 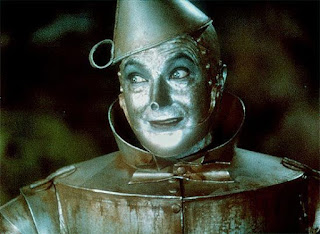 Rocky Suhayda said on his radio program last month that a Trump win would "be a real opportunity for people like white nationalists, acting intelligently, to build upon," Buzzfeed reported.

"Mr. Trump, I recommend to you to read this book," Salma Hayek said as she offered the GOP nominee a copy of "U.S. History for Dummies" on Wednesday's episode of "The Late Late Show with James Corden."

And 31 minutes ago (as I write this) Trump's latest Tweet:  Michael Morell, the lightweight former Acting Director of C.I.A., and a man who has made serious bad calls, is a total Clinton flunky!

And Tonight:  Mr Koch is entertaining Mr Trump on Cape Cod.
Perhaps the laugh is on us for allowing this to get to this point. He may be pushing the envelope to see how much we will take! 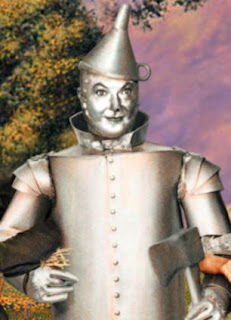 base emotion, Trump rages mindlessly through this campaign. In legend, the Golem is unable to speak; our current Golem is unable to achieve dignified silence. I wonder if there is higher purpose here, for like it or not, Trump has pierced the veil of decency of this country and exposed a dark underbelly that many of us idealists rarely suspected was so very present, rotting away our core values. We are in serious trouble, and I'm not sure how to fight this explosion of hatred and anger. His followers deify him, for he is a mirror of themselves, or at least an antidote to their feelings of impotence. Of course we must vote and make Trump go back to the slime from which he emerged, but that won't make the underlying problem go away, that won't mend the ragged hearts of those who helped create him. We must all dig down deep and strive to understand these people for like it or not, they are our brothers and sisters. There is only one human race, and we are all a part of it.

There you have one year in the year of Trump! Please note I only posted from the 7th of each month! 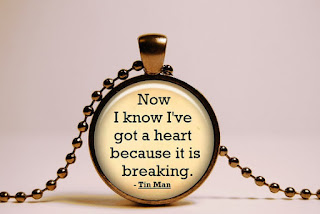 There are MANY other things happening the rest of the month. Imagine 4 years of this!

Can someone PLEASE give him a heart. Mine is broken.

PLEASE NOTE: These are my OPINIONS and based solely on what I have read and/or observed. 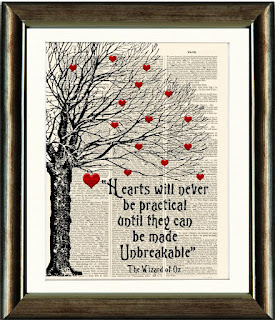 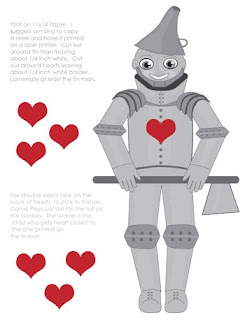 
Posted by RichardSkipper at 8:21 PM

Email ThisBlogThis!Share to TwitterShare to FacebookShare to Pinterest
Labels: Golem, I cannot see into Trump's heart, the idea for today's blog, the Order of the Purple Heart