Kristine Zbornik and Beverly Gray ( Seduced by Mrs. Robinson: How The Graduate Became theTouchstone of a Generation)

A society in which men recognize no check upon their freedom soon becomes a society where freedom is the possession of only a savage few.
-Judge Learned Hand, American jurist (1872-1961)

Happy Wednesday, December 13th, 2017
December 13 is the 347th day of the year . There are 18 days remaining until the end of the year.
We are expecting snow overnight. As I begin my blog today, I'm listening to the 50s channel on Sirius XM, specifically Clyde McPhatter's A Lover's Question from 1958.
If we were to go back to December 13th, 1958, it might have seemed like a simpler time but there is a lot right here and now to celebrate.
Today, I'm celebrating three individuals who are making great contributions TODAY through their art. The first is Kristine Zbornik. The New York Post called her a madcap mix of Ethel Merman, Lucille Ball and Bette Midler, her father called her a lazy piece of !@# that would never amount to anything, you decide. 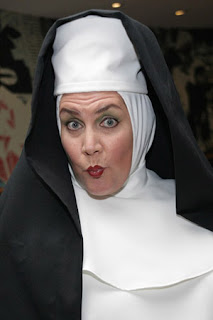 That is in HER bio, not my words. I'm a huge fan. She has some great workshops coming up in the year that I will tell you about as soon as I complete a quick pop-up interview.

If you were not in this business, what would you want to be doing?
Well when I'm not working I teach, maybe teaching yoga or some sort of metaphysical healing arts stuff, manual labor, therapist, it's hard to say.

What is it about this business that keeps you doing it?
I've done it so long at the exclusion of developing other types of work that I think I'm somewhat trapped by it now. I hate to say that, but I think it's true. But to some degree, everything long term has traps, relationships, marriages, family, careers of any kind because one ends up being identified by these things, right or wrong. 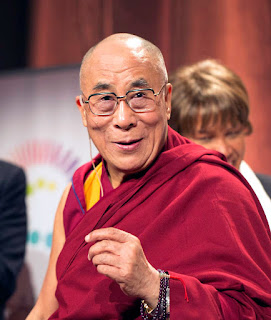 Who is the most famous person you have ever met?
The Dali Lama

What's the best thing you've seen in NYC and why?
Show? Lena Horne, Bette's live show and her Dolly, both self-explanatory, just great people doing great work at a later time in their lives when they could still execute it well. Also Louie CK's Madison Square Garden show last year was spectacular and brilliant. There are many other smaller things, a mime named Bill Bowers, his show called beyond words, Marilyn Maye's show, August Osage County, etc., etc.

If you could perform with one person, who would that be?
Louie CK, Tom Jones, George Carlin, but he's dead.

Who would you like to see profiled? Marilyn Maye

When you've lost your peace or sense of yourself, how do you bring yourself back?
I call my best friend, I write about it as truthfully as I can, I do yoga to move the fearful energy into another place, I realize or try to realize that although I'm feeling fearful, insignificant, overwhelmed, invisible, over the hill, not good enough, etc., etc., etc., that I am more than any of those fears AND I also have those fears and to let them be and they pass into something else with time.

How will this help you? Professional performers will receive in-depth coaching to strengthen their material and unique point of view – to be at their best for auditions and performances. 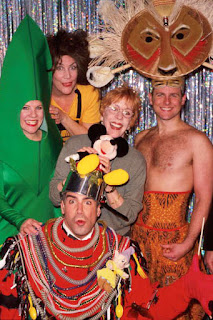 Who is this for?
Kristine’s students include musical theater and dramatic actors, comedians, singers, cabaret and other performance artists of all ages.

Who is teaching?
Kristine Zbornik draws from 40 years of performing on Broadway, national tours, Off-Broadway, and cabaret, as well as a decade of coaching professional performers.

Why is this master class unique?
Finding what sets you apart onstage. Kristine will teach and push you to take risks that allow your distinctive point of view to be utilized in your work.
$400 if registered before Jan. 1.
$480 for all other registrations. Payable by cash, check, Venmo or PayPal. 50% due by start of session


Beverly Gray
I became familiar with Beverly Gray because of a Google Alert! I'm a HUGE Doris Day fan. As a matter of fact, Ms. Day is one of my Holy Grail interviews. I received a Google Alert for Doris Day because of her mention in an article about Beverly's new book celebrating the film, The Graduate.
Beverly Gray has spent her career fluctuating between the world of the intellect and show biz. As she was completing her doctorate in Contemporary American Fiction at UCLA, she surprised everyone (including herself) by taking a job with B-movie legend Roger Corman. At down-and-dirty New World Pictures, she edited scripts, wrote publicity material, cast voice actors, supervised a looping session, and tried her hand at production. She collaborated with such rising directors as Joe Dante, Jonathan Demme, and Paul Bartel, and thought up the twist ending to a cult classic, Death Race 2000. Here is our pop up interview. 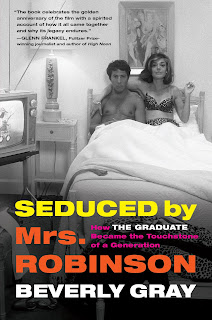 Please send a brief description of your book
My new book is called Seduced by Mrs. Robinson: How The Graduate Became theTouchstone of a Generation. It celebrates the fiftieth anniversary of the release of the landmark film by exploring how it was made, why it became so popular, and how it has changed American culture. My publisher is Algonquin Books, and Seduced by Mrs. Robinson can be found in all major bookstores as well as online.

What was it that made you want to write this book? How did it start for you and how long did it take?
As a Baby Boomer in good standing, I’ve long been fascinated by the film year 1967, a time when bold new movies challenged the American status quo. Originally, about ten years ago, I was planning to write about the Oscar race that pitted The Graduate against Bonnie and Clyde, Guess Who’s Coming to Dinner, and In the Heat of the Night. For various reasons, that book didn’t work out, and I was forced to do some serious rethinking. Ultimately it occurred to me to narrow my focus onto a single film: The Graduate. 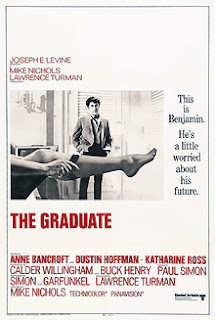 Because I had already done a great deal of research on the period, I was able to write Seduced by Mrs. Robinson in about eighteen months.

What is it about The Graduate that kept you committed towards the completion of your book?
The Graduate remains a genuinely enjoyable film. I think critics have long overlooked the fact that it has a great deal to say about American values and aspirations. I enjoyed the opportunity to go into depth on a movie that is often dismissed as merely a sexy
romantic romp. My personal memories of the late Sixties, a time when young people were realizing how much they wanted to distance themselves from the world of their parents, made me all the more eager to take on a film that has meant so much to me and my peers.

Who is the most famous person you have ever met?

As a native Angeleno as well as an entertainment journalist, I’ve met many famous people. But here are two that stand out in my mind: As a small child, I met Zsa Zsa Gabor at a Beverly Hills ice cream parlor.
She was sitting alone in a banquette, eating a sundae, and her small Pekingese dog was on her lap. Years later, I was lucky enough to interview Golden Age director George Cukor in his stately Hollywood Hills home.

What's your favorite part of your book and why?
My book is divided into three parts. It starts with a “making of” section, full of fascinating and amusing anecdotes, then moves on to a close reading of The Graduate, and finishes up with analysis of the film’s legacy. My personal favorite section is the close reading, because it allowed me to plunge into cinematic intricacies that I don’t think
most moviegoers have noticed.

If you could interview one person, who would that be?
Right now, given all that’s going on nationally, I’d love to interview Dustin Hoffman at length. He and I have chatted briefly, but there’s a lot more to say. If I could be fanciful rather than realistic, I’d love to have a sit-down with Orson Welles.

Why are celebrities such an important part of our lives?
At times we all feel small and inadequate. So we’re in awe of celebrities because of the way they loom large (literally, in the case of movie stars), by dint of their beauty, intelligence, and talent. Their success gives us a sense of hope and possibility. On the other hand, when celebrities face problems in their personal lives, we’re comforted by the fact that they too are human, just like us lesser mortals.

************
Between men and women there is no friendship possible. There is passion, enmity, worship, love, but no friendship.
-Oscar Wilde

I'm throwing back the curtain and showing my followers the little man behind the Wizard who is always trying to put forth a positive image of a man.

Let's Be Friends! I promise you a great experience!

You have the power to change anything, because you are the one who chooses your thoughts and feels your feelings.

Richard Skipper has the gift of making an interview seem like a warm conversation between friends.
Barbara Kahn, NYC

Bravo and thank You for the spectacular, intimate conversation with Melissa Manchester. It was so warm, flowing easily with mutual respect and affection.It was like I was there. The most real and down to earth interview I have seen ever,truly!We Fanchesters thank you sooo much for letting us get to know our so loved Melissa on such a personal level.  Cathy Baker, "Fanchesters Are Us" Fan and Photo page, Facebook

Richard Skipper's interviews are always a joy to watch and listen to!!! He takes an hour and make it seem like ten minutes!! I anxiously look forward to the next!!
Lisa Dascoli, Talk of The Town Podcast

Sit Back! A New News Cycle Is About to Begin!