Music Is In The Air! 3 Tenors In Search Of An Act, Happy Birthday, Lea Delaria, Jane Stuart...and more! 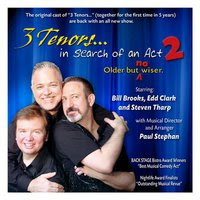 Happy Monday!
I think it was about 10 years that the late great Dottie Burman, Gerta Grunen, Danny and I went to Helen's (also gone) to see a show entitled 3 MEN IN SEARCH OF A TENOR. We were the only ones there! We had dinner and afterwords, we sent word that we would be more than happy to come see them on another night. They said that if we were willing to stay, they were willing to do a show. So we all moved up closer to the stage.
I felt like it was a command performance since we were the only ones there. They were brilliant and gave their all. As a matter of fact, because of that night, Paul Stephan became my musical director, for a while, and did most of the arrangements that I still use in my shows! If you've seen one of my shows over the past five years, you've heard Paul Stephan's arrangements. Well they are returning and I highly recommend you check them out! You'll have a grand time!
3 Tenors in Search of an Act2 - 2 Encore Performances
They had 5 sold out shows this spring, so they're bringing the show back to Don't Tell Mama's for 2 more performances!

"The primary thing to say about these singers is that their voices,
both singly and collectively, are fantastic! If the extraordinary audience response
was any guide, we can hope that the 3 Tenors will be back before 2017"
Jerry Osterberg - Cabaret Scenes


Today is Lea Delaria's birthday! I first saw Lea Delaria in Provincetown 23 years ago! She happens to be one of my favorite jazz singers. 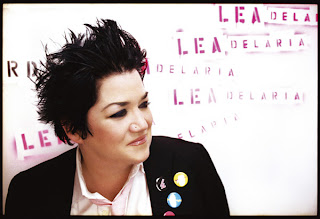 "The gal can certainly swing"
Time Out
Lea DeLaria has distinguished herself in every form of entertainment that she touches. Jazz Musician, Broadway Diva, Actor Writer and Stand-Up Comic, and it is plain to see why Ben Brantley of the New York Times describes Lea as, "Every inch a star."
Happy Birthday, and LOVE YOU, LEA! 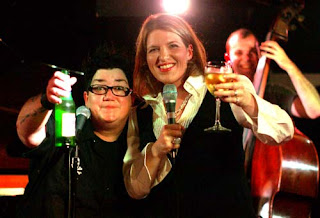 (Lea with Clare Teal and Simon Little on bass during "Well, Have You Evah" at the Wall To Wall Songbook, Pizza Express London. 16/10/07. Photo: Brian O'Connor)After two innovative CDs reinventing Broadway tunes (2000's Play It Cool) and rock and punk songs (2005's Double Standards), Lea turns her considerable talents to her first recording focused on timeless pop standards. But these classic songs like "Down With Love," "Night And Day," "Love Me Or Leave Me" and "Come Rain Or Come Shine" have never sounded so fresh and alive. "I styled this CD on the old school live recordings," Lea comments. "It is my hope that this CD will take you back to 1948 and the Village Vanguard. So please let me invite you to mix a cocktail and enjoy a smoke while you sit back and soak up the swing." 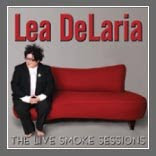 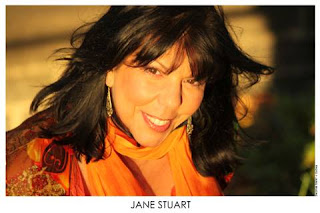 A friend of mine is the manager of Bette Midler's New Leaf Restaurant in Fort Tryon Park. We decided to go in one Friday night with friends. We got an added bonus, Jane Stuart and Rick De Kovessey were appearing there. I became an instant fan! I also got an added bonus in the mix: Jane and Rick became friends. They even helped me celebrate my 50th Birthday this year!I booked Jane on one of the WEDNESDAY NIGHTS AT THE IGUANA that I was booking at the time and we try to catch Jane and Rick whenever they are appearing anywhere.
Well, Jane also has a great new cd out called "DON'T LOOK BACK". I love it. It is on my Ipod (which is always on shuffle...over 5000 songs!). My favorite selections out of many are BIRD OF BEAUTY (Take a listen: http://janestuartmusic.com/music_2011/Extract%20from%20CD%205%20-%20Track%205.mp3) and SUMMERTIME!
Elizabeth Ahlfors in CABARET SCENES wrote, "Kicking off this new release with a bang, jazz singer Jane Stuart’s silvery tones make her a potent force to be reckoned with. A refreshing sound on the jazz canvas and showing an innate sense of confidence, Stuart embeds “I Just Found Out About Love” with a lively punch worthy of more familiar names from the complex world of jazz. Backed by an incredible jazz ensemble featuring Rave Tesar’s genius on keyboards, Stuart’s alto croons with a driving, cool style that, occasionally, recalls the young Nancy Wilson in her swing mode."
Jane's website is http://janestuartmusic.com
Jane Stuart started her singing career at age 5, on a local TV show, “Moser Starlites”. Her song was, “Me And My Teddy Bear”. As a child she studied ballet at Ballet Arts in Carnegie Hall, acting with Eleanor Raab and Jim Tuttle and singing with Sue Seton and in later years Don Lawrence. Her great love of dance, especially tap, lead her to study at Charlie Lowe’s School of Tap and Personality in NYC, alongside, Christopher Walken, Alan Paul (Manhattan Transfer), David Winters (West Side Story) and Jeff Conaway. In later years Jane attributes her tap dancing skills to be the start of her understanding of jazz. 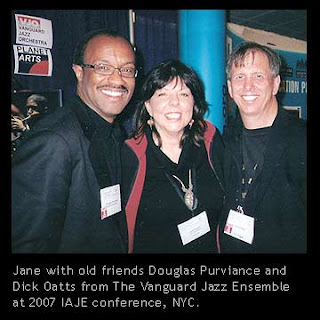 On Friday, June 03, please join me at the New Leaf Restaurant Ft. Tryon Pk. (at The Cloisters) NYC
for Jane Stuart and Rave Tesar-keyboaad/Rick De Kovessey-drums/ Scenic and beautiful restaurant with outstanding cuisine.They will play jazz, R&B and everything the traffic will bear. They've been there regularly for the past 2 years and it's always a great gig!
Winner of The Blue Chip Award
For Best Jazz Vocals - IAJE-Jazz Journal
Jane is ALSO a vocal coach!Jane Stuart Vocal Coach

With over 40 years of experience as a professional in the music business, Jane Stuart, offers her students excellence in teaching. She has studied singing , music, acting and dance with some of the finest educators in NYC including, Don Lawrence, Sue Seton, Gary Dial, Jim Tuttle, Bill Hickey, Uta Hagen, Charlie Lowe and Phil Black.

Jane’s Off-Broadway debut was in “Curley McDimple”, a parody of the Shirley Temple movies. Jane played the comedic role of the mean Miss Hamilton, (a montage of the many characters played by the great actress, Margaret Hamilton). She played this role for 3 years at the Burt Wheeler Theatre and then The Plaza 9 Theatre. Jane’s reviews were outstanding as she sang, tap danced and acted with the legendary Butterfly McQueen in this production. As a result of Jane’s fond memories of her experience working with Ms. McQueen, she was invited to contribute to Stephen Bourne’s book, “Butterfly McQueen Remembered”. Another great memory of this show was when Ms. Margaret Hamilton attended her performance and gave it her blessing. Margaret loved Jane’s portrayal.

Tomorrow is the birthday of my dear friend, Dawn Behrens!

Dawn and I first met at The Igcita (Fil Jessee's International Guild for Celebrity and Tribute Artists) Dawn is a dead ringer (no pun intended) of Anna Nicole Smith and Marilyn Monroe. Dawn is in the Orlando, Florida Area but travels and is available for corporate and/or private events. 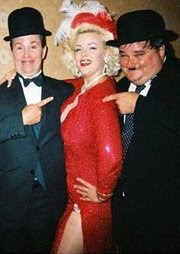 Dawn is an entertainment writer and a professional Celebrity Impersonator. Dawn has done many portrayals including Marilyn Monroe, Anna Nicole Smith, Elvira,Lucille Ball,Mae West, Dolly Parton,and more! As Marilyn, she has performed live all over the USA, Puerto Rico, Germany and even toured Japan last fall. Dawn's shows were seen regularly on the Sterling Ambassador II in Port Canaveral for almost 10 years until summer 2008. Currently,she writes for Examiner.com, and is putting a book together. Live performing is still going strong with her "Lady Luck Show" for events and parties. It is a combination of audience interaction,comedy, and live jazz, standards . Also Dawn was chosen by Camille Terry to be a part of an ALL FEMALE show called the "Rackpack". It is a sexy, funny, and "uplifting" show celebrating women!!
Follow Dawn on Twitter at: http://twitter.com/#!/OrlandoDish 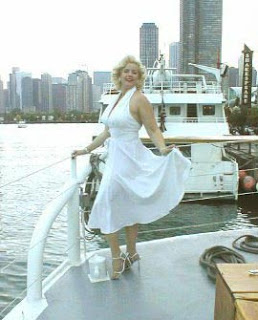 Tomorrow's blog will any other suggestions I receive!

Posted by RichardSkipper at 8:43 AM