An Evening With Lucille Ball: Thanks For Asking! 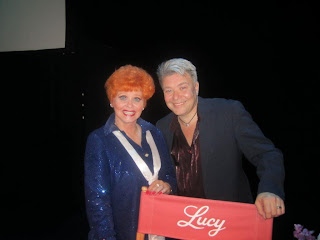 Ability is of little account without opportunity.
Lucille Ball

Happy Friday!
Can you believe we are halfway through October? 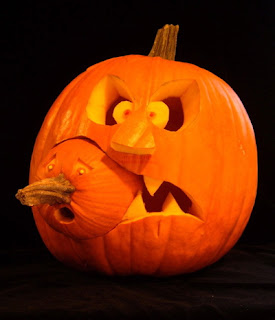 I certainly cannot! Hope you have big plans for the weekend. I am going away to the Hamptons till Monday. So perhaps no blogs till Monday. Perhaps an exciting one on Monday! We'll see!
Last night, Danny and I traveled to the Surflight Theatre to see Suzanne LaRusch as Lucille Ball. 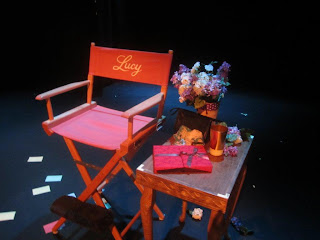 We left our house at 5:45 and got there at 8:15.
It was rainy, foggy, and slow moving traffic. We missed the beginning of the show; a prologue, (Lucille Ball in her dressing room prior to going out to do a 'talk back session' with the audience). The name of the show is "An Evening With Lucille Ball: Thanks For Asking".
First of all, it was well worth the trip! 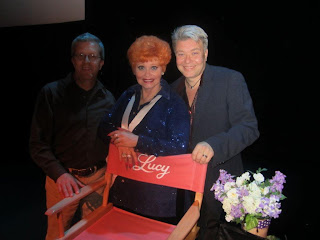 When the evening is over, you will swear that you have spent the evening with Lucille Ball.
Suzanne is more than an "impersonator" or tribute artist". She is a consummate actress.
Even though I am in this field of "impersonation", I am not a fan of most. After most "impersonators" walk on the stage, and you see the look (if they are able to pull that off!) and they sound like them (if you and they are lucky!), what next? Unless someone is capturing the heart and soul of the person they are portraying, they are unable to sustain a full evening of theatre. VERY FEW are able to do that! There are, however, a few over the years who have done that for me. Jim Bailey as Judy Garland, Julie Sheppard as Judy Garland, Robert Morse as Truman Capote, and Katie LaBurdette as Marilyn Monroe quickly come to mind. 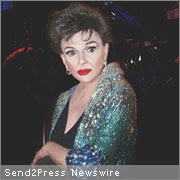 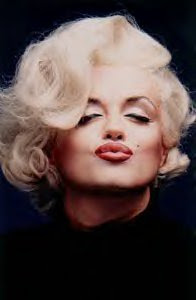 Trust me, folks, Suzanne is not doing a "performance" on stage. She IS Lucille Ball and it is uncanny.
Little things she does with her hands, for example. At one point, she picked up a piece of thread, and was working that piece of thread not deliberately, but as a subtle gesture. Something I saw Lucy do in an interview once! 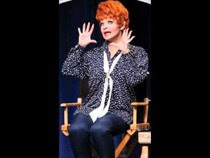 The premise of the evening is that Lucille Ball is doing a talk back session with the audience. A master class, if you will, on her legacy and on her approach to comedy. 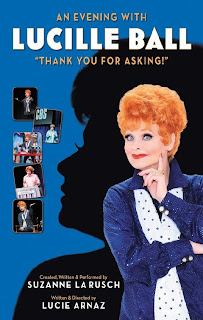 The play shows Lucille Ball in her later years doing a mock question and answer session which leads Suzanne, as Lucy to tell stories about the famous redhead’s legendary career in television. Lucy’s daughter, actress Lucie Arnaz, helped write the play and provided notes to Suzanne as it was being put together. Eventually Ms. Arnaz and her husband, actor Laurence Luckenbill, backed the play as director and producer for this national tour. 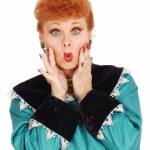 For those of you who have seen my show, you know that before each show, question cards are passed out to my audiences so they can ask "Carol" questions about her career. They are instructed that they can ask anything about Carol's body of work and her professional career, but nothing personal of off-color. I don't do that type of show. The question cards are screened before the show and placed on stage and I answer the questions throughout the show. This keeps me on my feet and the spontaneity excites me.

Suzanne's show is even more structured.
The "questions" are pre-recorded and off-stage voices (some you may even recognize!)ask Lucy questions throughout the show. This device keeps Suzanne on a linear path.
We are able to discover how "I Love Lucy" came to be, we are brought back to 'vitameatavegamin', the famous grape stomping episode, her stint on Broadway in Wildcat 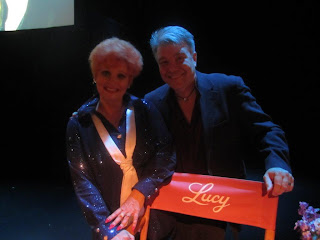 and of course, her love of Desi. That portion of the show was very poignant and even brought a tear to my eyes!
I have to say, as much as I loved Suzanne AND the show, the pre-recorded questions quite didn't work for me. Those moments seemed to slow the show down. I did speak with Suzanne after the show and asked if she had ever thought of taking questions from the audience. Of course, she said...and she is right, that everyone would immediately go to questions about Desi and they would immediately take away the arc of the evening.
I absolutely understand and respect that.


I think, however, that the device of the questions passed out before the show idea would certainly work in this show. Suzanne has performed as Lucy long enough to be able to field such questions OR have "plants" in the audience to ask the questions rather than have them pre-recorded. That would bring an intimacy with the audience to a whole new level. 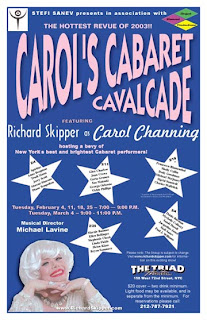 I have to say that when an icon is portrayed on stage,it is a very difficult task. The audience comes in with such a high expectation. I never take that for granted. In the case of Lucille Ball, she is in our homes almost daily. It is so ingrained in our consciousness. A few months ago, I saw Lee Tannen's autobiographical "I Loved Lucy" about his relationship in the last year's of Lucille Ball's life. His book and the show centers mostly on their games around the backgammon table. 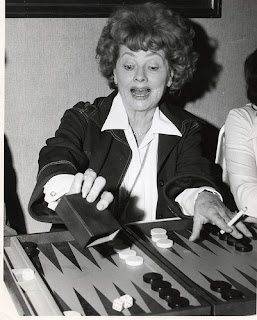 I remember when Lee's book first came out how much I loved the book. I have followed the evolution of this show, first at The Laguna Beach Playhouse, the benefit performance here in New York, and hopefully on to a successful life in regional theatres. I think with the right tweaking, it can be a succesful New York show. I feel the same way about Suzanne's show. 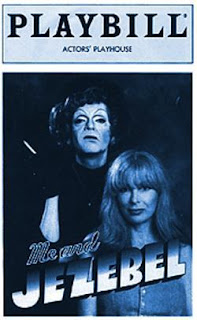 Years ago, there was a wonderful book by Elizabeth Fuller about a house guest she once had that stayed...and stayed.
It was sort of a modern day The Man That Came To Dinner. The house guest was Bette Davis! After the success of the book, Elizabeth developed this into a two person play highlighting the anecdotes involving her (Elizabeth Fuller) and her family in their escapades with Miss Davis. It was a hilarious romp! I saw it years ago at The Ball Room with the late great Randy Allen as Bette Davis (he died of AIDS) and Elizabeth Fuller as herself.
Randy portrayed Bette Davis a real living person rather than a caricature. He portrayed her post stroke. He could have easily taken her into the camp realm. Thank God, he never did! That's why the show worked!
All of the entertainers cited in this blog honor their subjects rather than doing a send-up.

I have been fortunate enough to call among my friends several celebrities. The one thing that I've gleaned from them beyond their bodies of work is their humanness. However, when they reach an iconic stage, they lend themselves to being portrayed by others on stage.

We are lucky when there are those that do this with the respect that these stars deserve. I was lucky enough last night to bask in what made Lucille Ball, Lucille Ball! I was equally lucky to bask in the talent of Suzanne LaRusch! 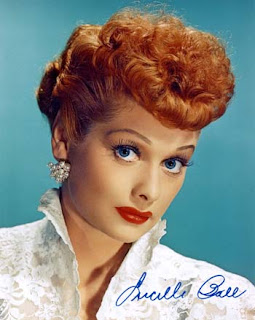 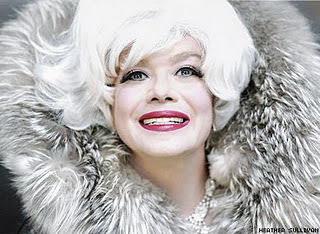