Forget Your Troubles, Come On, Get Happy! 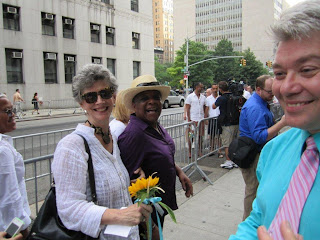 "Life has a habit of not standing hitched. You got to ride it like you find it. You got to change with it."
_Woodie Guthrie, American folk singer-songwriter (1912-!967)

Happy Monday!
It's October 3rd!
October 3 is the 276th day of the year (277th in leap years) in the Gregorian calendar. There are 89 days remaining until the end of the year. Today, I'm focusing on several people that make me happy!
Isn't that a great way to start the week?
In a study, participants who spent no more than 15 minutes throughout the day for a week acting with kindness became happier for six months. 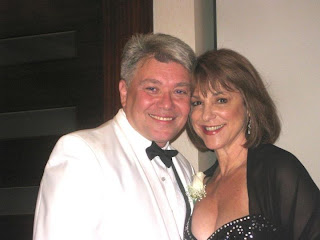 Jana Robbins (pictured above with me) makes me happy! I was so thrilled to Have Jana not only attend our wedding Saturday night in Tappan, NY. She also sang new lyrics to "Sunrise, Sunset " written by Sheldon Harnick for same sex couples. It was a night to remember! The first time I saw Jana on stage was as Miss Mazepa in 1990 in Gypsy.

We have become very good friends over the years sharing birthdays, holidays, and sadly, the passing of dear friends. When her father passed away from Parkinsons, I suggested we do a benefit for Parkinsons. I would do anything for Jana and I feel she would do the same for me. 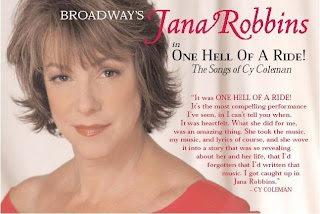 Jana Robbins is a Tony nominated producer for the 2009 Broadway production of RAGTIME, joining Kevin McCollum and Manny Azenberg to transfer the highly successful Kennedy Center Production.
In 1995 she founded BETTER WORLD PRODUCTIONS in order to "present theater and film entertainment that inspires us to create a Better World". Jana made her Broadway producing debut with Allan Knee's LITTLE WOMEN starring Sutton Foster and Maureen McGovern and her Off-Broadway producing debut with I LOVE YOU BECAUSE.
Other Off-Broadway producing credits include WHITE'S LIES starring Betty Buckley and Daniel Beaty's THROUGH THE NIGHT with producer Daryl Roth earning her a second Drama Desk nomination. 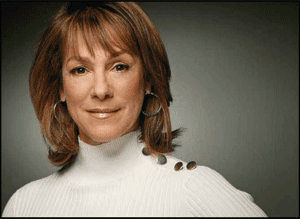 Jana Robbins just directed the West Coast Premier of CUPS at The Thousand Oaks Performing Arts Center for Theater League. CUPS will also have a production this October at the Aventura Theater in Florida through The Broward Performing Arts Center. Her directing credits include CRIMES OF THE HEART (in which she appeared on Broadway) at her alma mater Stephens College as well as a production at Gettysburg College in Pa. 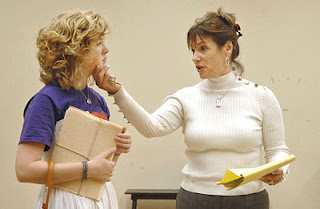 (Julia Robinson photos)
JANA ROBBINS was born in Johnstown, Pennsylvania, where she began dancing lessons at the early age of 4 at the Gene Kelly School of Dance, appearing in recitals and singing provocative solos like "Blues in the Night" by the age of 11.
She attended Westmont Hilltop High School, where they luckily did a Broadway musical each Spring. Her junior year, she was cast as Nellie Forbush in SOUTH PACIFIC and played Eliza Doolittle her senior year in MY FAIR LADY, helping to further support and solidify her love of theater.

After graduating high school, Jana went to Stephens College in Columbia, Missouri, where she received a Bachelor of Fine Arts Degree in Theater, returning there several times in the late 80's to teach, and direct CRIMES OF THE HEART, in which she had appeared on Broadway.
In 1985 Jana was invited to be the Commencement Speaker at Stephen's Graduation Ceremony when Jean Kirkpatrick, a member of President Ronald Reagan's cabinet, became unavailable. That same year, she wrote and performed her first one woman show, "Being Alive" a musical revue about discovering your purpose in life, and knowing your self worth as a woman.

"Entertaining, witty, and lead full force and with great finesse by actor Jana Robbins, a phenomenal artist: This play is a winner. Jana Robbins herself, I might add, has one more fan. She carried the stage, the audience, and all the characters in between"
-ITP Atlanta 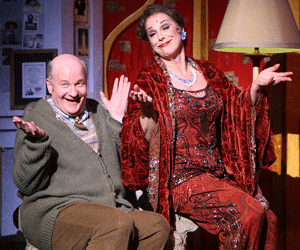 "It was ONE HELL OF A RIDE! It's the most compelling performance I've seen, in, I can't tell you when. It was heartfelt. What she did for me, was an amazing thing. She took the music, my music, and lyrics of course, and she wove it into a story that was so revealing about her and her life, that I'd forgotten that I'd written that music.
I got caught up in Jana Robbins."
-Cy Coleman

"Jana Robbins has had a colorful Broadway career as an actress and singer; now she has capsulized it into a thoroughly entertaining, warm-hearted cabaret hour, packed with songs and lively reminiscences. One of her most popular roles was Mazeppa, the sexy stripper "with a gimmick" in the Tyne Daly production of Gypsy; Jana was also Daly's standby. In her cabaret performance, she relives her experiences through several of the show's numbers, such as Everything's Coming Up Roses, Small World, You'll Never Get Away From Me and Together, Wherever We Go – singing and acting them so well that it seems as if her original co-performers were still on stage with her. Among her other top numbers are a moving My Mother Was a Singer, a graphic Zip, and a powerful version of I'm Still Here. Performing unmiked, Jana fills the room easily with her vibrant personality. Doyle Newmeyer shines with fine musical and vocal accompaniment."
-Peter Haas Cabaret Scenes 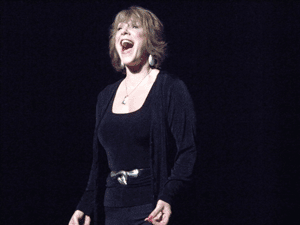 Thank you Jana for all you've given me, I LOVE YOU! 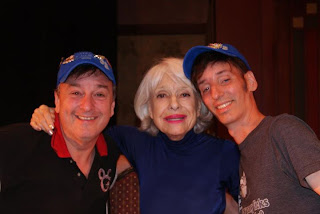 Carol Channing makes me happy! It still blows my mind to know that she is a friend. I've often written about my introduction to Carol Channing. It was actually Lucille Ball performing as her on an episode of The Lucy Show.I started mimicking "Carol Channing"! Tells you the kind of kid I was. I used to mimic what I saw on TV the night before. The first time I actually saw Carol Channing on TV was in her television special with Pearl Bailey. I now own the Cecilia Sisson costume she wore on that special. She also wore it on her appearance on The Muppets Show. 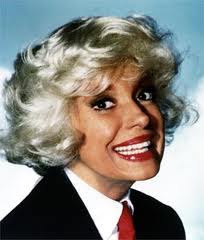 Carol Channing is a Broadway star with a raspy, often imitated voice and extravagant style who has been described as Ethel Merman, "only more so." She began performing in grade school, with spot-on impressions of her teachers that landed young Channing in the principal's office. In high school she competed on the debating team, and won a statewide speaking contest with her presentation on "What America Means to Me".
She studied drama for two years at Bennington College, until a kindly teacher told her she did not need any further training, suggesting instead she should go to New York and try to break through on stage.Carol is STILL entertaining! She appeared yesterday as part of Gay Days at Disneyland. The reports have been glowing! 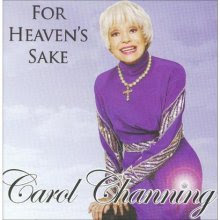 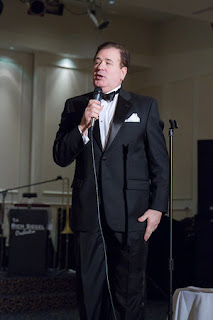 Lee Roy Reams makes me happy! I first saw Lee Roy on stage in 42nd Street in 1980 shortly after I moved to New York. I was, of course, familiar with who he was but this was the first time that I was seeing him on stage. Over the years, he has grown to be a good friend. He sang "It Only Takes A Moment" at our wedding on Saturday night. I could not believe it when he said yes to singing at our wedding. I got choked up hearing him sing it Saturday night and I get choked up thinking about it now.Lee Roy Reams (born August 23, 1942) is an American musical theatre actor, singer, dancer, choreographer, and director.

Born in Covington, Kentucky, Reams earned a Master of Arts degree and was awarded an honorary doctorate from the Conservatory of Music at the University of Cincinnati. He made his Broadway debut in Sweet Charity in 1966.

Reams was nominated for both the Tony and Drama Desk Awards as Best Featured Actor in a Musical for his performance in the original production of 42nd Street in 1980. He played the role of Frank Schultz in the 1989 Paper Mill Playhouse production of Show Boat, which was televised on Great Performances by PBS . 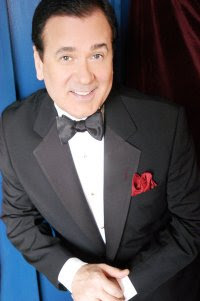 Take Lee Roy home with you!

Reams has appeared on concert stages and in cabarets throughout the country. At present he is serving as the resident director of the Theatre at Sea program sponsored by the Theatre Guild.

Getting e-mails like this make me happy, "You both did Truman Capote proud. Didn't call today, thought you would be enjoying cousins, nieces and such and didn't want to disturb you.
You both certainly produced the party of the year, everything, absolutely everything was as perfect as you would have wanted it. There is
nothing that could have been better..........but hey, don't let this triumph go to your heads..........on second thought you have every right!
We are so happy for you both, to have shared this perfect evening, to have shared the love and warmth that emanated from the entire room.
it was glorious. Savor every moment, it's worth it.
The 21 year video was delightful, would like to watch it again. R & D, it was perfect ( I seem to be repeating myself!!!) and we loved being part of this very special day. Thank you."

and "Hi, Richard. Just a short note to thank you for all you have done to help Berkeley. You are such a blessing to our family and we are so grateful to have you in our lives! Again, wishing you and Danny many more years of love and happiness!! And thanks again for your encouragement and advice you've shared with our girl." 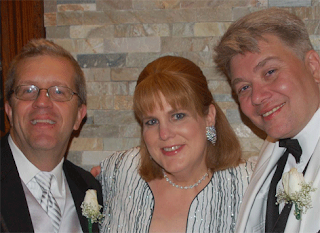 My friend, Patty Gay, makes me happy! I met Patty after she did an article on me after my involvement with Weston High School's production of "Hello, Dolly" 3 years ago. I had gotten a google alert for "Hello, Dolly!" when that high school needed costume pieces for their upcoming production. She interviewed me and I was so happy about the article that I said I would like to return the favor. Was there anything she desired? She said she would LOVE to interview Carol Channing. I arranged it!I love you, Patty!
Patty has been a journalist with The Weston Forum newspaper, based in Weston, Conn.,for seven years. (She started as a reporter, now she is also the assistant editor.) Before that she was the First Selectman (equivalent of Mayor) for New Fairfield, Conn. 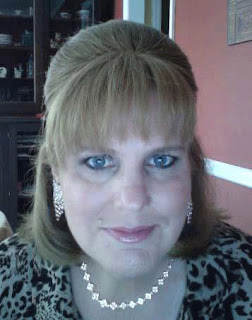 She has won 10 writing awards from the New England Newspaper Press Association (NENPA), on a variety of topics ranging from drug abuse from a teen's perspective, to a beekeeper who lost all his honeybees to Colony Collapse Disorder. 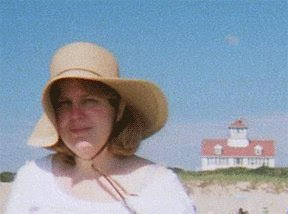 A series that Patty wrote about interesting doorways in Weston earned a special NENPA award for Community Involvement in the Newspaper, and served as the inspiration for a book by Julie O'Connor, called The Doors of Weston.She is currently co-writing a book about journalistic plagiarism with a writer who once plagiarized her work. 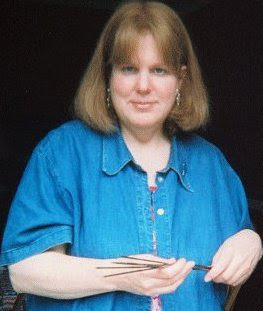 Like many other Broadway enthusiasts, Patty has loved theater since she was a kid. She spent many hours playing her mother's show tune albums and acting out what she thought were the plots. Her favorite was the original cast recording of Hello, Dolly! featuring Carol Channing. She has been a huge fan of hers her whole life. 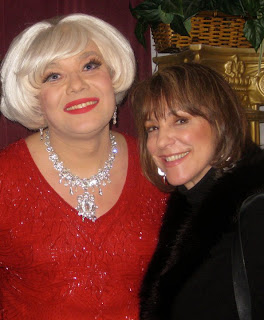 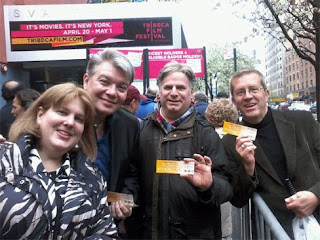 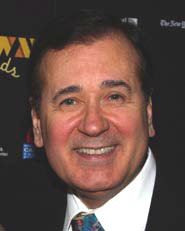 Posted by RichardSkipper at 5:37 PM