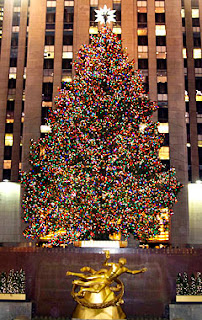 Christmas waves a magic wand over this world, and behold, everything is softer and more beautiful.
Norman Vincent Peale

Happy Tuesday!
I love Christmas in New York and we will be celebrating that at The Triad on December 20th and I am proud to announce the cast of that show tonight in the next installment of Richard Skipper Celebrates...


THE TRIAD, 158 West 72nd Street
RICHARD SKIPPER CELEBRATES... CHRISTMAS IN NEW YORK!
This is the the second installment of this series. Once a month, Richard will be celebrating a different theme. A Benefit for Carol Channing's Foundation for the Arts. Rosemary Loar (who I will be celebrating in tomorrow's blog), Miles Phillips, Diane J. Findlay, Maureen Taylor, Leslie Orofino, Scott Coulter, Carol J. Bufford, Karen Oberlin, Julie Reyburn, AND Raissa Katonah Bennett! RESERVATIONS A MUST! $25 show plus two drink minimum, $50 PREMIUM SEATS plus two drink minimum. PLEASE CALL 845-365-0720 TO RESERVE. DO NOT CALL THE TRIAD.

But before I get to that, I would like to thank everyone who came to the The Triad last night. We had a sold out house. The staff at The Triad was amazing. The cast was beyond my expectations and I am very happy to start work today on the next show!


Jana Robbins got us off to an incredible start with A Little More Mascara from La Cage Aux Folles.
This clip is not from last night but it gives you a glimpse of Jana. She then introduced me and I sang I Put My Hand In and Put On Your Sunday Clothes from Hello, Dolly! and introduced Walter Willison who sang Half The Battle from Ben Franklin in Paris and Love, Look in My Window from Hello, Dolly!

Lee Roy Reams, unfortunately, had a medical emergency and was unable to attend. John Patrick Schutz graciously stepped up to the plate and sang a beautiful rendition of It Only Takes a Moment from Hello, Dolly!
He was joined by Anna Bergman's gorgeous soprano voice and they were accompanied by Alex Rybeck who is always top notch. This was followed by Helena Joyce-Wright, one of Jerry's original Girls.
She toured with Carol Channing, Andrea McArdle, and Leslie Uggams in Jerry's Girls and stood by for Leslie.
She sang two Two A Day from Parade and Wherever He Ain't from Mack and Mabel.
Bob Mattern's magnificent baritone sang Time Heals Everything also from Mack and Mable and I Am What I Am from La Cage Aux Folles.

I then followed his set with Almost Young from Mrs. Santa Clause and introduced Bob's partner of 22 years (They are getting married January 18th!) John Patrick Schutz who sang My Best Girl from Mame and It Takes A Woman from Hello, Dolly!
This was followed up with Peggy Herman (joined by Alex Rybeck and Rex Bennicasa) on To Be Alone With You also from Ben Franklin in Paris and World, Take Me Back from Ethel Merman's Hello, Dolly!
Then Sue Matsuki sang both a classic and a lesser known tune: If He Walked Into My Life from Mame and Where In The World Is My Prince from Miss Spectacular.
This was followed by Jana Robbins and Bob Mattern joining forces for I Won't Send Roses from Mack and Mabel.
Then Diane. J. Findlay brought the house down with It's Today and Moon Song from Mame and Tap Your Troubles Away from Mack and Mabel.
Gorgeous Sarah Rice then sang And I Was Beautiful from Dear World in the original arrangement from Don Pippin specifically for this show.

Anna Bergman, once again joined by Alex Rybeck, returned to the stage for an exquisite pairing of I Promise You A Happy Ending from Mack and Mabel and It's As Simple As That from Milk and Honey.
The show ended with a spirited samba beat of The Best of Times from La Cage Aux Folles and Before The Parade Passes By from Hello, Dolly! sung by Peggy Herman arranged by Alex Rybeck for her upcoming CD, Herman Sings Herman. She was joined by Alex Rybeck and Rex Benincasa. The entire audience was on its feet dancing out into the street. And now, it is time to prepare for our next show, Richard Skipper Celebrates...Christmas in New York. I have asked Diane Findlay to join us once again and I am thrilled that she said YES! So reserve today for what promises to be an exciting night!
And Miles Phillips will also be joining us next month. He was MARVELOUS on Look Over There from La Cage Aux Folles and a medley that was created by him and David Maiocco of Ribbons Down My Back from Hello, Dolly! and Love Is Only Love which was written for Mame but ended up in the film version of Hello, Dolly!   Multiple award winner Miles Phillips sings a haunting marriage of two Jerry Herman songs in the smash hit revue Carol Channing + 2.


This is what Walter Willison wrote to Diane:


D -- I remember the very first time you ever sang for Bob Wright & Chet Forrest like it was yesterday. The first thing Bob said when you left the room was "That lady has something you can't buy: class, and something you can't teach: talent!" It was the first of many times I heard both of those Legendary Gentlemen say "That lady is a real STAR!" Last night I'm sure he and Chet were smiling down, as you brought down the house in Richard's Celebration of Jerry Herman, so pleased that you proved them right once again.
As always, I'm so proud of you.
Love, WW 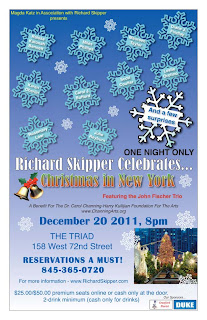 Here are a few comments from last night:
Richard,
Once again (ref. your tribute to Jerry Herman) you have topped yourself with yet another wonderful, beautifully staged and coordinated event; and on top of that, you also managed to fill it with some of the best talent NYC has to offer, too! I'd heard-in talking with some audience members, last night-that you may be doing this type of tribute to other legendary Artists on a monthly basis. If so, you can count on my being there to see each and every Show; as long as YOU are hosting it!
Keep up your great work Richard, and never stop bringing the kind of happiness, joy and magic that you give to all of us!

CONGRATULATIONS! You're a class act all the way. Thank you for asking me to be part of last night's most memorable Celebration! You did us all -- and especially Jerry Herman and Carol & Harry's Foundation -- proud. Wonderful cast, wonderful musicians, wonderful friends, wonderfully produced. Especially loved your show-stopping rendition of "Almost Young", which is now my new favorite song.
Love, Walter Willison


Like Dolly Levi, my friend Patricia Gay truly knows the meaning of paying it forward.  She could not attend last night so she bought two tickets for someone to attend in her place. I offered them to the first person on Facebook who contacted me. They went to Elli: The King of Broadway! I wish more people would take a lead from Patty.

Thank you, to all the entertainers mentioned in this blog! Thanks for the gifts you give to the world!
I love you ALL!! 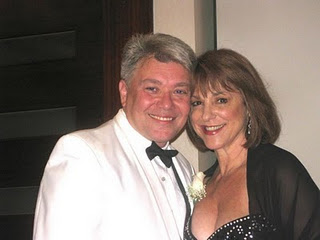 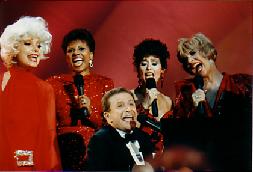 
TILL TOMORROW...HERE'S TO AN ARTS FILLED TOMORROW!
Richard Skipper, Richard@RichardSkipper.com 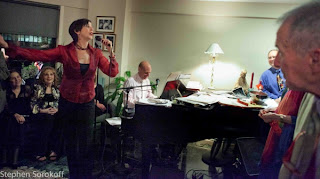 Posted by RichardSkipper at 11:43 PM

Email ThisBlogThis!Share to TwitterShare to FacebookShare to Pinterest
Labels: And I Was Beautiful, DOLLY, It Only Takes a Moment. Hello, Leslie Uggams, Mack and Mabel, Norman Vincent Peale, Richard Skipper CelebratesChristmas in New York, Sarah Rice, Tap Your Troubles Away