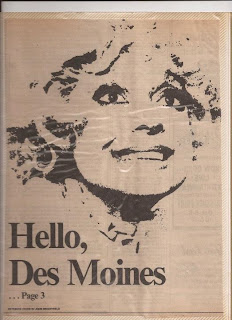 In the large scheme of things, you probably have never heard of Ray Workman. He’s not “in the business” and he has no other relationship with Dolly beyond being a huge fan. When you hear his story, I think you will understand why I chose to include him as part of this project.

Dolly is a busy-body matchmaker type, who likes being in on everything and knowing everything there is to know about everyone she meets. Can't dance? She'll teach you. Ray feels the same about Dolly Levi.
He probably holds the undocumented record of seeing Hello, Dolly, probably nine hundred performances! He has seen up to twelve or thirteen different Dollys. Obviously, it is Ray’s favorite show. He feels that nothing has ever topped it. He doesn’t think anything ever will. 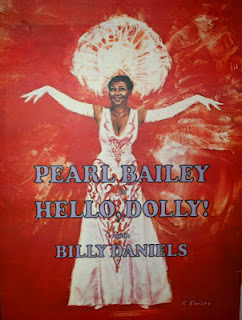 He has seen Carol Channing, Ginger Rogers, Martha Raye, Phyllis Diller, Pearl Bailey, Dorothy Lamour, Sheila MacRae, Jo Anne Worley,  Eve Arden,  Yvonne De Carlo, Carol Swarbrick, and then some women that are not as well known as the ones cited here. He also saw Nell Carter in DOLLY with Nipsy Russell in Long Beach in the early 90's, just before the Long Beach CLO went under.  They booked that show as the First International Cast, as it was a totally mixed ethnic cast.  She was fine as Dolly, and Nipsey was very funny.  Ray remembers she cried during her closing night speech, saying it was one of the best companies she had ever worked with.
It all began when Ray had just graduated high school in 1965. Actually, this story begins in August. His grandmother came to him, telling that the Dorothy Chandler Pavilion at the LA Music Center was opening in Los Angeles.
She wanted to get season tickets. She was an avid theater goer.  Ray had never been to the theater. His grandmother talked him into going. That season included Carol Channing in Hello, Dolly and Florence Henderson and Ricardo Montalban. Ray was familiar with Channing because of a television special she did. He was enthralled with her.
She blew him out of his chair. He couldn’t wait to see her in Dolly. She had also done a number, at that point, on the Ed Sullivan Show. He’s thinking it was Before the Parade Passes By. Of course, EVERYBODY was singing the title tube.Ray’s parents knew that he and his grandmother were going, so they asked if he could get tickets for Dolly for them as well.

Ray took his younger brother who was about ten years old at the time. Because of huge demand, they opened the ticket sales window on a Sunday. That had never been done before. The phones were ringing off the hook.  Dolly was only going to play LA for seven weeks.
They wanted to sell all the tickets on the same day and give everybody the same chance.  Ray and his brother took the bus about half an hour from where they lived. They lived in Compton, California which is about twelve mile south of LA. They got up around five thirty in the morning and they got to downtown LA around six fifteen AM. The box office wasn’t open and already the crowd was enormous! This was documented in The LA Times.
The lines to buy tickets were so intense and they opened the box office at ten AM.  The box office stayed open until every seat was sold. That was about four thirty that same afternoon. Ray and his brother stood in line from seven AM until four PM. An announcement was made about half an hour before they got to the box office window. “May we have your attention, please? There are no more Saturday night tickets left.” They did that as each day sold out. Ray’s parents could only go on a Monday night. Ray’s father was off only one day a week at that time. As they stood in line and kept hearing all of the days dropping off like flies, there were some nights AND matinees disappearing, narrowing their options. By the time they got to the box office window, they were able to get the last two tickets on a particular Monday night! There were still people behind them. God only knows what their fate was. In the next day’s LA TIMES, it was stated that all fifty six performances for its entire seven week run was sold out! This was before TKTS and Telecharge or TicketMaster! They weren’t even taking telephone orders. You HAD to go to the box office! People didn’t have the credit cards that are now the norm.  Of course, there were no ATMs at that time. People were there with full cash buying what they could. One thing, also, that is noteworthy. There were two food trucks who got word about this huge lines of people standing in the hot Californian August sun to buy tickets for Dolly. Those two food trucks completely ran out of food.
Ray and his grandmother ended up buying season tickets. They were in the third row of the third balcony. At that time, that was expenditure to watch their pennies to do. Remember, Ray was still in high school. He was working part time in a movie theater.

She just kept gobbling down this food. The more she did so, the more the audience roared.
The restaurant scene was also out in the house, on a riser. She was that much closer to the people around her. There was no place for her to get rid of anything that might not be tasty.
Carol almost checked to death on stage with no where to go.
Ray also had another layer to his Dolly story. He was friends with Danny Lockin who had played Barnaby Tucker in several productions of Dolly AND repeated the role in the film. Ray was taking Theater Arts in Cerritos College in Norwalk, California. He was also studying journalism. When Dolly came back in June of 1967, once again at the Dorothy Chandler, this time with Ginger Rogers and David Burns, Ray once again took his grandmother. They moved from third row in the third balcony to fourth row center orchestra seats. This time, also, it was his treat. Now, he had money coming in; he was working in addition to going college. Danny Lockin blew Ray out of the water; he couldn’t believe how wonderful Danny was. He nailed the part of Barnaby Tucker. Danny seemed to have even more enthusiasm than Harvey did, if that is at all possible. Ray sent Danny a note asking him if he could interview him for his college paper. He mailed it to him in care of the Pavilion. A week later, Danny called Ray at home. He told Ray he would love to meet with after the Saturday matinee. Ray ended up interviewing him backstage in his dressing room which he shared with Bill Mullikin, who was playing Cornelius. Ray wrote fast and furious since he didn’t have a tape recorder. After the interview, he asked Ray if he would like a tour of the backstage area. It was getting close to six PM, and there was a lot of backstage activity for that night’s show.
Ray sent a copy of the interview before it was published.  Danny read it and approved it. They kept in touch with each other. Ray also saw the show a couple of times during that run.
Ray saw it every week, sometimes three or four times just to see Danny do it, Ray thought he was so great. After seven weeks at the Pavilion, the show was moving to the Curran in San Francisco. Ray said that he was going to get the tickets and go up for their closing night. Danny wanted to treat Ray for the tickets, but Ray declined.
Ray was invited back by Danny. Danny introduced Ginger to Ray who remembered him from Los Angeles. She was very gracious. After seeing Ray a couple of times, she would greet him with, “You’re back again! How did we do this time?” Around that time, Danny told Ray that something was brewing that he could not talk about. It was the movie! He never said a word about it until after all contracts were signed. Ray loved him in the movie; thought he was wonderful. He was toned down for the movie. Gene Kelly toned down the enthusiasm that Lucia unleashed on stage.

Unfortunately, Danny had a sad ending. Ray heard about it at work. This was August of 1977.Someone that Ray worked with called to tell him that Danny Lockin had been killed. It was in Variety. Ray ran out and got the paper. It was a daily at that time. Variety wasn’t as clear as the LA Times as to what had happened.
He was brutally stabbed over a hundred times. Apparently, he had met someone in a bar in Garden Grove. Ray, who is gay, did not know that Danny was. Danny was dating one of the girls in the show when Ray met him. They also got married and had a child. Ray and Danny had gone out for coffee and pie for a couple of times, never for cocktails. Ray was not a drinker. They never discussed sexuality. Ray’s attraction to Danny was because he was a great man, nothing more.
Ray had met Cathy Haas, who Danny married. Cathy had played the front end of a horse in a dance number when the Dolly! company played in  San Francisco.  In 1967, while working with Dorothy Lamour in Las Vegas, they got married and later lived in a tiny apartment in New York City.  During the shooting of Hello Dolly, Cathy became pregnant, so they moved back to LA., bought a house and in early 1969, their son Jeremy Daniel was born. She was very standoffish and aloof towards Ray. Maybe it was because Danny and Ray clicked as two friends. He doesn’t know.

The first time Ray saw Dolly, he was eighteen years old. He is now sixty-five. The show epitomizes for Ray the message that you can start all over again with your life. It doesn’t end because someone passes away. Dolly says it all in Before The Parade Passes By. As Carol Channing says, that is the spine of the show. Dolly fights on and succeeds. The show hit at the right time in our country. Kennedy had been assassinated a mere few months before this show opened on Broadway. What this country needed was something light and airy and fun. That is why, there is a production of Dolly playing somewhere in the world on any given night. We are overdue for revivals of both Dolly and Mame on Broadway!

Thank you Ray Workman for the gifts you have given to the world and will continue to give!

My next blog will be... My Exclusive interview with Lina Purl!

Posted by RichardSkipper at 11:59 PM