Veronica Klaus: Something Cool and Classy! 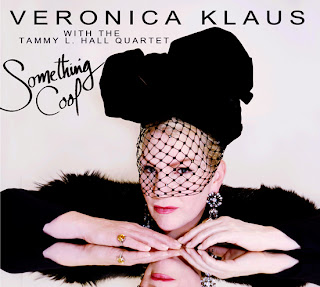 There is a vitality, a life force, a quickening that is translated through you into action, and there is only one of you in all time. This expression is unique, and if you block it, it will never exist through any other medium; and be lost…
-Martha Graham

Happy Friday!
Today, I begin my blog with two quotes. They are both personal philosophies of my blog subject, Veronica Klaus, today. I just got her CD, Something Cool, and was blown away! Order this CD today! 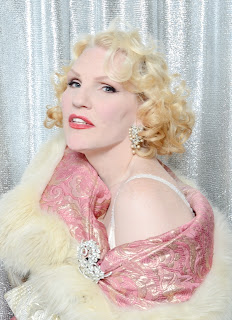 She also has a new show, Veronica Klaus sings The Peggy Lee Songbook at Joe's Pub here in New York on August 29th. Hope to see you all there!

Today, I am celebrating Veronica's body of WORTH!

I am already thinking of Veronica along iconic lines and she now has a new show celebrating one of my favorite singers, Peggy Lee. I began this interview by asking Veronica who the most iconic person is that she ever met.
There have been two women that she has met that actually gave her a thrill:
One was Lainie Kazan.
Veronica had owned her recordings from the 60s and loved the over-the-top arrangements and delivery of classics but when she met Lainie at a movie premiere at the LGBT Film Festival in San Francisco the first thing that came to mind was her dramatic reading of the Rod McKuen poem Night Song. 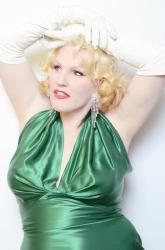 Veronica mentioned it and threw out a couple of lines and Lainie joined in!  Soon they had recited nearly the whole thing in all its theatrical splendor!  Lainie definitely lived up to her bawdy reputation!

The other was Gena Rowlands:
Veronica went to a reception of a Cassavetes film at TOSCA in North Beach and the cream of SF cinema society was in attendance.
Ms. Rowlands was sitting in a booth with reporters etc holding court and someone called Veronica over and introduced her.  Veronica told Ms. Rowlands that she was a big admirer and (absolute truth) that Veronica had asked her hair dresser for “Gena Rowlands blonde” just last week!  Gena LOVED that!
She was so gracious and their talk made the gossip columns!

Veronica’s inspiration almost always starts with specific songs or themes and spins out from there.  SOMETHING COOL, her new CD came from the fact that she used to gravitate more or less exclusively to “hot” singers.  However, as she gets older, she finds herself drawn more and more to the cool: to the reserve: to that intangible implied communication.  So she desired this project to set a mood that carried through.

She almost always starts with a list of songs that is WAY TOO LONG and carves a show out of it, like a figure from a block of wood or stone….as shapes and themes emerge, things may be added to supplement them. 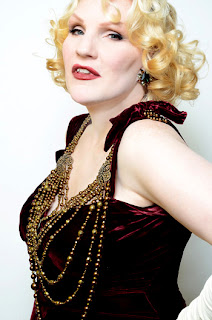 The most embarrassing thing that ever happened to Veronica on stage was once when she was doing an outdoor stage show on a street between two tall buildings and it was like a General Motors wind tunnel test site.  It was cold as could be but they were up there anyway and when she lifted her arms, she felt like she just might fly.  At one point, a gust of wind came along and took the whole sound system behind them, which was on wheels, sailing off the edge of the stage with a loud crash and thud, leaving them there, mute and cold and flapping in the wind.  SHOW OVER.


Veronica grew up in a very small town in Illinois, started singing in 4th grade with the Carpenters’ We’ve Only Just Begun at solo contest which received a 1st—however the judges did note that they thought it a bit mature for such a young singer.  She went to University of Illinois at Champaign-Urbana where she was under the tutelage (love that ridiculous word) of the renowned Basso William Warfield.  She moved to San Francisco immediately.  In 1989, she began performing in SF and formed her Heart and Soul Revue, a big band R&B band that won some awards here and once opened for The Ohio Players!

In 1997, she released her first CD of mostly original songs called All I Want, and was nominated for a GLAMA award for Best Female Artist. She released a second CD Live At The Lodge in 2006 and has, along the way, played a 2 year residency at the legendary Enrico’s in North Beach, and so many shows and benefits she can’t recall them all.  She has been at home at the Rrazz Room in SF for the last few years, playing a variety of critically successful and popular shows!  Don’t miss her upcoming Veronica Klaus—Songs from the Peggy Lee Songbook with The Tammy L. Hall Trio, Summer Tour 2012, coming to San Francisco’s Rrazz Room, New York City’s Joe’s Pub and Hollywood at The Gardenia!


As most of my readers know, I'm campaigning for Carol Channing to receive the 2012 Kennedy Center Honor (Please sign the petition below!). I asked for Veronica;s thoughts on this. She thinks it would be absolutely appropriate—and overdue!  Carol is unique and perhaps it would make up, after all these years, for her being replaced by Streisand in the Hello Dolly! movie…not that Veronica didn’t enjoy it….. 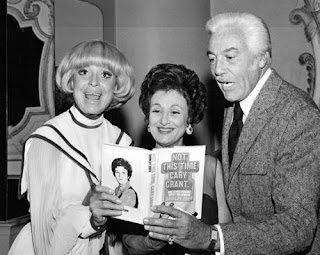 If Veronica could meet her favorite celebrity, what would be the first thing that she would ask?

If she’s bothering them….if she is, she will just gaze from afar and not embarrass herself further.

There are two things that Veronica is really proud of as an entertainer. Her newest CD SOMETHING COOL, because she feels like she has accomplished EXACTLY what she desired to do with it.  That doesn’t happen very often.  Often the goal changes with the process and it’s an ongoing negotiation to an end product, but with this she feels like it was quite deliberate and focused.  She’s very happy with it.  Also, she co-wrote (with Jeffrey Hartgraves) and performed a one-woman autobiographical show “Family Jewels—The Making of Veronica Klaus,” that tells much of the story of her growing up, transition and, she thinks, what this thing called “art” is to her personally….in music and stories.  It was smart (if a little geeky), funny, poignant and a little sexy.  People ask her about doing it again, but she feels happy to have had her say on the subject of how VERONICA KLAUS came to be. Then again, she remembers the story about Peggy Lee in an elevator—plain-faced and subdued—when someone inquired “Are you Peggy Lee?”  She replied, “Not yet!” Perhaps there will be more to tell?

What would Veronica tell her 25 year old self?
Be patient for what comes with time and experience, but don’t wait too long on the things you can accomplish NOW! 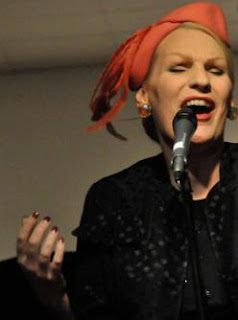 It really bothers Veronica, and ME TOO!, to see the art of music being reduced to contests.  Expression and communication is the goal, not “winning” or “out singing” someone else.  Comparing Artists is like comparing apples and oranges—SEE ABOVE MARTHA GRAHAM QUOTE!  On a side note, that is why I refuse to go to Metro Star or anything else when entertainers are competing for the top position.
How is Veronica reaching HER audience in today’s world of social media?
Most of the time effective publicity comes down to word of mouth and networking, whether it’s on Facebook or twitter or in person.  Attending other performances building community—as I do—and earning the support of those YOU admire and respect.
Right now Veronica is beginning the process of getting radio play 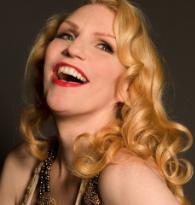 for the new CD which is not to be taken lightly….but she just had, for the first time, the experience of having a stranger recognize her music from its being played on a SF Bay Area radio station KCSM 91.1 and that was a huge affirmation for Veronica that she’s doing something right.  You just have to keep believing that what you do is worthy of interest and respect and YOUR OWN enthusiasm and it will ripple out.
Any favorite/special vocal remedies when she has sore throat, etc...?
Don’t panic.  Usually if she’s not feeling 100% she tries to just stay calm and not get upset about it.  Usually when she doesn’t focus on it, and just does everything else she needs to do to be prepared and present---the adrenaline will help to smooth things.

What was Veronica's most memorable theatrical experience as a child?
When she was younger in 1976, in Gillespie IL, Home of “Black Diamond Days-the original festival of coal,” their newly formed Community Chorus produced something called The All-American Revue. It was VERY exciting at the time, but in retrospect was on a par with Waiting for Guffman!
Veronica still remembers the dance coach, Mary Lou Newcomb-Menzie, who was a barrel-shaped woman of sixty-something with a red beehive hairdo and one eye that wandered off to the left, tap dancing full throttle through the finale (“I’m A Yankee Doodle Dandy/You’re A Grand Ol’ Flag”) medley in full James Cagney drag! 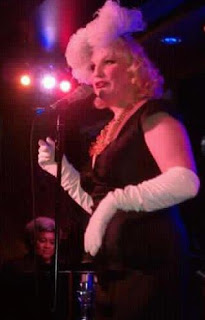 You never knew if the big finish was going to be the splits or a heart attack!

What does Veronica do to prepare for her performances?
Get there early and sound check and hopefully there is a quiet,out of the way dressing room to be quiet, review and be in the present.  Looking good is always the best way to start!  Veronica doesn't understand performers who think that if they dress down they will be taken more seriously… It’s all part of the mood, the magic.  Sounding great is an absolute necessity, but if I’m going to look at you for an hour or more, give me something to look at! My fellow entertainers, PAY ATTENTION! I always dress to see a show and if the entertainers on stage don't have the same respect for me, why should I be there?

Is there a production she wishes she had seen?
She really would have loved to have been able to see the premiere of Nijinski dancing to Debussy’s  L’Apres Midi d’un Faun. 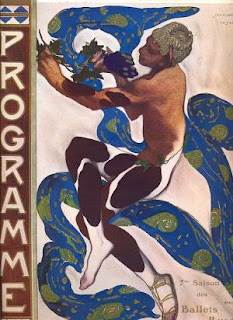 Veronica has a piano roll of a transcription for her 1924 Ampico player piano and every time she listens and trys to picture Nijinskistretching out to the opening phrases and imagine the delight and/or scandal it caused.

What is Veronica’s fondest Memory?
She must have been in 1st or 2nd grade when she used to sit on the kitchen floor playing the 45rpm of Johnny Cash’s “Ring of Fire” on the little portable record player. She wore the grooves out on that one!

I think my new memory will wearing out Veronica Klaus' Something Cool CD!

The Gardenia
7066 Santa Monica Blvd
West Hollywood
For ticket sales and information in LA go to www.therrazzroom.com and look for RRAZZ ROOM ON THE ROAD or call (323) 467-7444

Thank you Veronica Klaus for the gifts you have given to the world and will continue to give!

My next blog will be... My Interview with Ray Workman Celebrating Hello, Dolly!