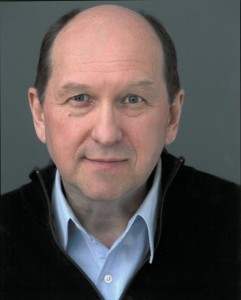 Joel Hatch has a very impressive resume. As of this writing, he is currently appearing on Broadway in the current revisal of Annie.  He has also appeared in Billy Elliot, Adding Machine, and Annie Warbucks.  Joel also played Horace Vandergelder opposite Alene Robertson’s Dolly Levi in Hello, Dolly!
Joel’s first memories of Hello, Dolly are of Louis Armstrong’s recording of the song Hello, Dolly and the movie. He had never seen the musical on stage until he did it. The first time he saw it was the movie. He loved the movie. He is glad he had not seen it on stage prior to doing it. That allowed him a lot of freedom to figure out what he desired to do with Horace. He wasn’t influenced by anybody else.
As of this writing, he has only done the one production of Hello, Dolly!
He also did Gypsy with her after that production.
Dominic Missimi directed Dolly at Marriott Theatre in Lincolnshire, IL in the ‘90s.
Hello, Dolly continues to succeed because its story drawn from The Matchmaker is one of the finest shows ever written.  The Matchmaker was a perfect play to musicalize.
Alene and Joel had a great mature on stage relationship that fared very well for Dolly and Horace. They had a very good comfort level with each other on stage that allowed them to play freely and trust each other.
That allowed for a lot of spontaneity on stage.

Joel thinks that it is time for a Broadway revisal with someone that will take it in a completely new direction. When there is such a strong stamp on a show by such a brilliant and wonderful actress, one has to go in a completely different direction. Of course, Dolly has to be someone who has great comedic ability as well as heart. There is a great vulnerability that is needed, especially at the end of act one when she has her chat with her deceased husband.

One thing that Alene and Joel looked forward to each performance was the eating scene. They had been doing comedy together for so long that that scene really allowed them to play off of each other. The key is to have a really great time. The chemistry between Dolly and Horace HAS to work. The audience has to believe that love/hate relationship and that love will overcome that.
Joel fell in love in Hello, Dolly by doing it. It is one thing to see a show; it is a completely different experience doing it and to explore it from the inside out. That allows an actor to go, “My God, this is a brilliant piece.”
Joel also loved his off stage moments with Alene. During those days, she was a smoker. She would do this funny little thing where she would go into to the hallway where they were allowed to smoke and do her “warm-up” by taking the cigarette and taking a puff, breathing in through the cigarette, and going, “Ah! Ah!! Ah!!!” doing her scales with the puff of cigarette! It was hilarious to see her do this. The entire chase scene through the Harmonia Gardens was fun for Joel.
Dominic and Joel spent a lot of time going back to the source material, to ground Horace. It is very easy to make Horace a caricature and/or a cartoon instead of a real man.
The audience needs to understand where his pain comes from and his loneliness and what his needs are.
That helps you understand the comedy a lot better. It also helps you understand why he has the relationship he has with Barnaby and Cornelius.
All of this clarifies the various relationships with the other characters he interacts with in the piece, especially with Dolly. When one understands his background and where his feelings and emotions come from, that will give a justification to come at her full throttle.

They had a ten week run with Dolly. Joel and Alene continued to tweak their performances as the show continues. They were constantly finding new things to play.
There are some actors that actors may find themselves with on stage who are not really there emotionally and/or mentally. They are inside their heads somewhere thinking about how they look or how they present themselves. He never had that with Alene.
She was always right there in the moment with him. There is nothing she enjoys more than playing, the fun of each moment. She was always there catching his eye. There would be a glimmer in her eye and they were off and running. Getting able to work with a fellow actor that is that spontaneous is an absolute joy. It doesn’t happen that often.
Nancy Missimi, Dominic’s wife, was the costume designer.
Everyone was extremely lucky at the Marriott. The theater was in the round. A lot of money was not spent building beautiful tableaux behind the cast. The costumes, for the most part, were the sets in terms for setting the tone for where they were. The Marriott always invested a great deal of money into the costumes. Nancy was brilliant with period costumes and giving the actors a better sense of who their characters were. It is certainly helpful when an actor is playing someone like Horace to have a costume that establishes that character just as the actor walks on stage.
Nancy has a great sense of humor as a designer as well as a great sense of style. They had gorgeous costumes for the show.
The thing that is important to remember with theater in the round is that an actor can never turn upstage! The actor really has to be present for that audience at all times which forces the actor to be more honest. He or she can’t have a moment where they turn away and giggle. They have to be in the character in the moment at all times. Slip up and some member of the audience will see it. This is the greatest education any actor could have.
That informs an actor on what their discipline should be going forward with other productions whether they are on a Broadway stage or on any other stage. Joel does not think there is a “worst thing” about working in the round. There is always going to be someone who can’t see the actor’s face and that face projects emotion. That, therefore, teaches the actor to use their full body to project emotion. What it does is challenge an actor in ways that the proscenium stage does not.  The thing that is brilliant about Hello, Dolly is that it is so true to the original source material. The source material is a story of such great heart and emotion as well as comedy. It allows people to have a night of mot only light entertainment, but a story that asks great questions about relationships. It is a full rich evening for audiences. That is what the theater should always be trying to accomplish.
One of the challenges of doing theater every night, Joel has been lucky in that regard, is that he rarely sees theater. He hasn’t seen other actresses play Dolly other than Streisand.
He loved her, thinking she had great heart. He loved her in the performance. He loved her on screen relationship with Matthau.
Alene Robertson is a well known actress in the Chicago area. Every show has to be tailored to whoever is playing the lead. Period. That is true if Bernadette Peters is playing the role or Katie Finnerman or ANYONE else, for that matter. It is not a cookie cutter show. The show has to meet the actress where she is and she has to bring her life experiences to the table. That is true of any actor playing any role.
Joel only met Jerry Herman once. It happened when he was working on the sequel to Annie. Alene Robertson was also in that production. They spent about a year and a half on that production on the road and off-Broadway at the Variety Arts Theater in 1993. Jerry Herman came backstage one night. He came up to the dressing room. 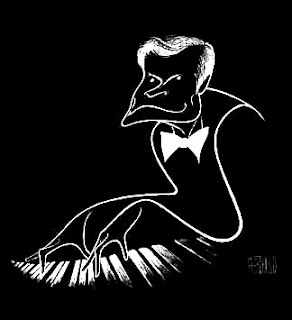 It was an off-Broadway dressing room that everyone shared. Harvey Evans and Donna McKechnie were also in that cast. Jerry Herman spent about twenty minutes chatting with the company. He was appreciative and supportive and everybody felt better after he left. It was a very warm supportive chat.
One of the things that Joel has had to do with both of his roles opposite Alene, Herbie in Gypsy and Horace, is to make them three dimensional.
In The Matchmaker, there is more to the character of Horace than there is in Hello, Dolly!  Cuts were made here and there to put the emphasis on the character of Dolly to make the story work in her favor. One of the challenges was in creating a Horace that was three dimensional, one that is a real human being and not a gruff character. As state earlier, that really relied heavily on The Matchmaker and carried those feelings over to Hello, Dolly’s Horace.
The thing that Joel loves about Great American Musicals which is our great art form, along with jazz, is that they have integrity and they have heart. Hello, Dolly has both in spades.
It is a dream to get a chance to do it. There are certain musicals that have been touchstones throughout the history of the American musical theater that have set the standard for how we view musicals and have moved the art form forward. Hello, Dolly is one of those musicals because it tells a story that is rich in its ideas, rich in its heart, and rich in its artistry.

Thank you Joel Hatch for the gifts you have given to the world and continue to give!

My next blog will be...My exclusive interview with Ellen Travolta on Hello, Dolly!

Posted by RichardSkipper at 7:17 PM