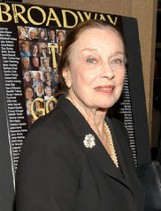 Baptista: Wonder of wonders, a gentleman in Verona desires you in marriage.
Lilli Vanessi: Then he best go back there.
Kiss Me, Kate

I am very excited about today’s blog. I was not one of those kids that grew up with original cast albums in our home.  Being a kid from South Carolina, my parents preferred country music.
However, my parents would take me to the library every Saturday and I was allowed to check out as many cast recordings as I desired. The librarians knew me and didn’t put a limit on me. Judy Garland at Carnegie Hall, Hello, Dolly, Gypsy, Funny Girl, AND Kiss Me, Kate were my favorites. I also read every book I could get my hands about the theater. I had and still do have a great appreciation for all of the greats that have gone before me. Last week, I had the incredible honor of interviewing one of the legends, Kate herself, Patricia Morison! (Thank you, Harlan Boll, for arranging this!)
Patricia Morison is a stage and motion picture actress and mezzo-soprano singer.She made her feature film debut in 1939 after several years on the stage. During her time as a screen actress she was lauded for her patrician beauty, with her large eyes and extremely long, dark hair among her most notable physical attributes. During this period of her career, she was often cast as the femme fatale or "other woman." It was only when she returned to the Broadway stage that she achieved her greatest success as the lead in the original production of Cole Porter's Kiss Me, Kate.
How I envy all of my Los Angeles friends, even the ones I don’t know yet!  The Actors Fund's Musical Monday series will continue Dec. 10 at 7:30 PM with an evening entitled Ladies of an Indeterminate Age at the Pantages Theatre in Los Angeles.
The performance will boast the talents of veteran actresses Anne Jeffreys, Jane Kean, Pat Marshall, Patricia Morison and Charlotte Rae. John Bowab directs with musical direction by Tom Griep.
The women will sing songs from their careers, talk about their co-stars, directors and composers and stray into their wicked (or not-so-wicked) adventures in the great tradition of 'No Business Like Show Business. 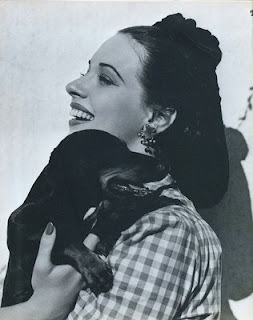 Ms. Morison and I sat down for a wonderful chat last week and this blog is the result of that chat. Today, I celebrate Patricia Morison’s body of Worth.

I began by asking Ms. Morison what advice she would give to someone wanting to go into this business. She says it’s very easy to dispense advice but none of it has to do with the realities of this profession. It’s up to each person to find their own way and to find themselves.

The person who made the greatest impact on Ms. Morison’s career was Cole Porter. She was not known as a singer, she was known as an actress. She HAD been studying voice for a long time. He asked her to come up and “audition” for him. It wasn’t for a particular project; it was just to get her used to singing for people. That’s when he handed her the script of Kiss Me, Kate.

He then opened a whole new world for her. She had gone out to be in the movies from New York. She had done an operetta in 1938 (in New York).  The show was called The Two Bouquets and her leading man was also Alfred Drake! In 1943, Ms. Morison did a film called The Silver Skates.  Martha Mears dubbed her singing for Morison. Years later, Martha Mears was being interviewed and announced that she had dubbed for Patricia Morrison. Friends were calling Patricia and saying, “You were not dubbed! You were never dubbed!!” She said, “Yes, I was!” They gave her a song in the picture which she learned and then she went to shoot it. The budget would not allow for her to record the song! She shows up on the voice and hears this voice imitating her! Ms. Morison said Ms. Mears did a fine job but it didn’t sound a bit like her.
She tells me that she has had absolutely no difficulty maintaining the long lasting relationships in her career. They are much more difficult to acquire. She was fortunate enough to know the Oliviers (that includes Vivien Leigh) when Ms. Morison was doing Kiss Me Kate, John Gielgud, and so many others. She is also a fan of some many of today’s actors and entertainers.
If she had not been an actress, Ms. Morison would still be in the arts. She is a painter. When she was sixteen, she went to Washington Irving High School in New York.  She won a scholarship that would have taken her to Paris to study art at the Beaux- Arts.  She told her mother she didn’t desire to go to Paris. When her mother asked her why not, she told her she wanted to be an actress. Her mother responded by saying, “Well, we better find the best drama school for you.” She then embarked on a career as an actress.
As a young child, her parents took her to Charlot’s Revue of 1924.Bea Lillie was in that show.  She did a number dressed like Britannia with the British flag draped around her. It was so funny that Patricia could not stop laughing. That is her earliest memory of theater. She was nine years old.
Her first professional job was in a play called Growing Pains about teenagers. She was so bad in rehearsals that they fired her. She cried so hard that they gave her a walk on.
Her favorite rolls are a tossup between Kate and Anna in The King and I. Because she created Kate, that has a very special place but she did love playing Mrs. Anna.

She attributes her longevity to luck and heredity.  She hasn’t had anything done. She does contemplate having a tuck done here and there from time to time as she looks in the mirror. Then she wisely decides to leave everything alone. Her mother also lived a long time.
What drove her ahead was the fact that she fell in love with the acting profession as a young girl in New York. Her only need was good people to work with. She didn’t have any talismans or things like that.
She has never been in despair in her career. She has been disappointed and frustrated a few times.  Life goes on.
When she was young in New York, during the Depression, she used to walk all the way from where she lived on Central Park West to downtown. In those days, for twenty-five cents, she could stand in the back of the theater. She saw Noel Coward and Gertrude Lawrence in Tonight at 8:30, she saw the Lunts, all the great actors. They all inspired her.
Patricia Morison would like to be remembered as a nice person and she is.
See Patricia Morison LIVE Monday Night in the lobby of the Pantages Theater in Hollywood! The evening will begin at 7:30 PM with cocktails and hors d'oeuvres followed by the 8:30 PM performance. A dessert reception with the performers will conclude the night. 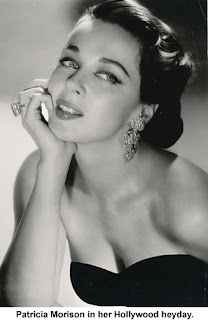 The following was sent to me:
Re Patricia Morrison. . . just wanted to share a detail.

My Dad was once married to Anne Jeffreys' sister (Anne Jeffreys was known for "Topper", "Street Scene", Dick Tracy films, lots of westerns, etc.)  (Anne Jeffreys and her family used to live in our house in North Carolina!)  Jeffreys was later "discovered" by Kurt Weill.  The lead in "Kiss Me Kate" on Broadway was originally offered to Anne Jeffreys, but she had other commitments at the time.  So she recommended to the producing team that they audition her pal, Patricia Morison.
Just thought I'd share that. 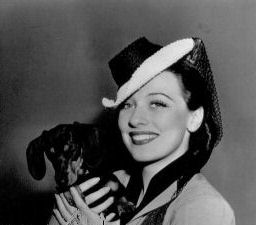 Thank you Patricia Morison for the gifts you have given to the world and continue to give!

My next blog will be...My exclusive interview with actor Clifton Davis on the Pearl Bailey/Cab Calloway Production of Hello, Dolly!

Posted by RichardSkipper at 2:07 PM