"Truth is a great flirt" 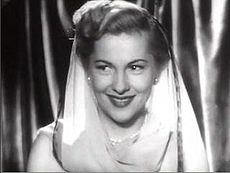 Happy Saturday!
A beautiful but cool day here in New York. Billie Holiday is singing I'll Be Seeing You in the background, neighbors are busy preparing for a yard sale, I'll be going to a 60th Birthday party tonight and I sit here with a blank canvas as I begin to write my blog but I see that it is Joan Fontaine's 94th birthday and, yes, our paths have crossed. It was 1981, she was 64, I was 20 and I was so excited that I was going to see her in person. Harold J Kennedy was doing a series of talk back sessions at St. Malachy's, the Actor's chapel in New York.

Harold J. Kennedy was the grandson of Daniel J. and Mary Loughrey O'Neil. Daniel was President of the Eastern League Baseball Association and Hampden County Commissioner. Harold was the elder brother of John Paul Kennedy and the son of J. Harry Kennedy and Mary O'Neil Kennedy, both educators. Harold grew up on Lincoln Avenue in Holyoke, Massachusetts. After his graduation from Holyoke High School, he went to Dartmouth College for his undergraduate degree and later graduated from Yale Drama School. During his half century in show business, he worked as an actor, writer, director and producer in theater, movies, and television. He talked Orson Welles into giving him his first job in the theater. Harold wrote a number of plays, including A Goose for the Gander which he created for his friend, Gloria Swanson. The play opened on Broadway at the Playhouse Theater in 1945. Harold was well known on the summer stock circuit. In 1978, his book No Pickle, No Performance An Irreverent Theatrical Excursion from Tallulah to Travolta was published by Doubleday. It detailed his humorous exploits working with some of the best known entertainers of the twentieth century.

Well, once again, in 1981, he did these lecture's at St. Malachy's.
No Bed of Roses had come out in 1978, the year before I moved to New York. And, being a kid who read everything about old Hollywood, I devoured it. 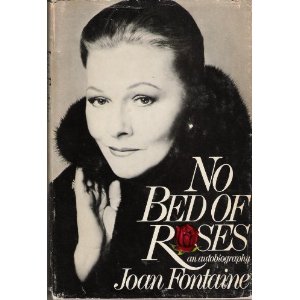 This wonderfully juicy tell-all reveals a new tragedy, illness, or romantic fiasco on almost every page.
Joan was born in Japan to British parents who were cold and harsh.
Their marriage ended early, and Joan and her sister (Olivia de Haviland) moved to California with their mother. The famous rift (more like a "war") between Joan and her older sister apparently was a case of extreme sibling rivalry that lasts to this day.

Joan was doing a book tour and she was there to discuss the book and sign copies. When she first came on stage, she said, "I will answer any and all questions. But please, no questions about my sister." A woman's hand shot up and she asked, "Who is your sister?"
The entire room burst into raucous laughter.
Joan gathered ALL the flowers on stage, which were massive, and gave them to this woman in the audience. I will never forget that!

Joan de Beauvoir de Havilland (born October 22, 1917), known professionally as Joan Fontaine, is a British American actress. She and her elder sister Olivia de Havilland are two of the last surviving leading ladies from Hollywood of the 1930s.
Fontaine is the only actor to have won an Academy Award for a performance in a film directed by Alfred Hitchcock, Suspician.

Since she embarked on a Hollywood career at 18, Joan Fontaine, carved her niche in history as the star of such memorable films as Rebecca, Suspicion, This Above All, Jane Eyre and September Affair. 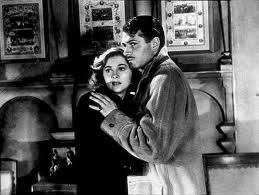 But, as the title of her best-selling autobiography, No Bed of Roses , suggests, Fontaine did not always find the going smooth. 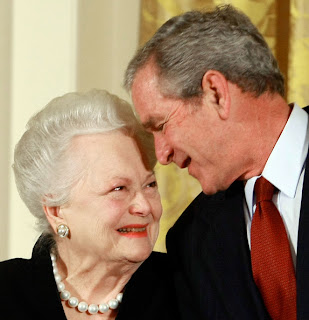 She survived a difficult childhood, an intense rivalry with her equally famous sister, four failed marriages, recurring illnesses and the destruction by fire of her California estate in 1960. Olivia de Havilland and Joan Fontaine have been feuding for many years now.  It saddens me that after all this time the sibling rivalry and jealous,  petty sister jabs are still hurting and strong within both Olivia and Joan.
Born in Tokyo, Japan, Fontaine is the younger daughter of Walter Augustus de Havilland, a British patent attorney with a practice in Japan, and Lillian Augusta Ruse, a British actress known by her stage name of Lillian Fontaine.
Her parents married in 1914, and were divorced in April 1925. Her paternal cousin is Sir Geoffrey de Havilland, designer of the famous de Havilland Mosquito aeroplane. Fontaine became an American citizen in April 1943. Reportedly a sickly child who developed anemia following a combined attack of the measles and a streptococcal infection, her mother moved her and her sister to the United States upon the advice of a physician.
The family settled in Saratoga, California and Fontaine's health improved dramatically. She attended Los Gatos High School, and was soon taking diction lessons alongside her elder sister. When she was sixteen years old, Fontaine returned to Japan to live with her father. There she attended the American School in Japan where she graduated in 1935.
Fontaine made her stage debut in the West Coast production of Call It A Day in 1935 and was soon signed to an RKO contract.
Her film debut was a small role in No More Ladies (1935) (in which she was billed as Joan Burfield).[5] She appeared in a major role alongside Fred Astaire in his first RKO film without Ginger Rogers: A Damsel in Distress (1937) but audiences were disappointed and the film flopped. She continued appearing in small parts in about a dozen films, including The Women (1939) but failed to make a strong impression and her contract was not renewed when it expired in 1939, the same year she married her first husband, British actor Brian Aherne. They divorced in 1945. 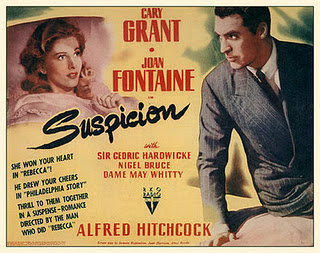 In No Bed of Roses, Joan says her mother, Lilian de Havilland was the most important person in her life.
"She was beautiful, gracious and a talented actress. My father was an English professor at Waseda and Imperial universities in Tokyo who left Mother for our Japanese maid when I was 2. My mother later married a department store manager, George Milan Fontaine, but she remained the dominant figure in our lives. My family was a combination of the critical and perfectionist—and that's tough. We didn't have a loving childhood; my stepfather made sure we had a military childhood. Even our beds were khaki color. The oddest thing was that our parents had absolutely no plans for our future. You normally ask a little child, "What do you want to be when you grow up?" We were never asked that question."
Fontaine's luck changed one night at a dinner party when she found herself seated next to producer David O. Selznick. 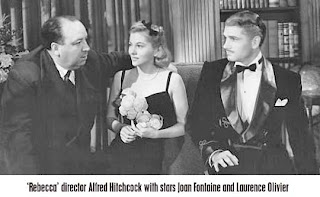 She and Selznick began discussing the Daphbe du Maurier novel Rebecca, and Selznick asked her to audition for the part of the unnamed heroine.
She endured a grueling six-month series of film tests, along with hundreds of other actresses, before securing the part some time before her 22nd birthday. Rebecca marked the American debut of British director Alfred Hitchcock. 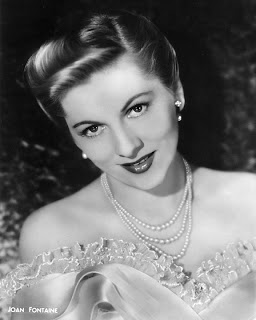 In 1940, the film was released to glowing reviews and Joan was nominated for an Academy Award for Best Actress.
She did not win that year (Ginger Rogers took home the award for Kitty Foyle) but Fontaine did win the following year for Best Actress in Suspicion, which was also directed by Hitchcock.


This is the only Academy Award winning performance directed by Hitchcock.
During the 1940s she excelled in romantic melodramas.
Among her memorable films during this time were The Constant Nymph (1943) (for which she received her third Academy Award nomination), Jane Eyre (1944), Ivy (1947), and Letter from an Unknown Woman (1948). Her film successes slowed a little during the 1950s and she also began appearing in television and on the stage. She won good reviews for her role on Broadway in 1954 as Laura in Tea and Sympathy, opposite Anthony Perkins. She also appeared in numerous radio shows during the 1940s for the Lux Radio Theatre.
As she says in the above interview,
her mother claimed that she did not see Joan and Olivia;s films, but she found out that she actually did see their pictures. She told a friend of hers that in Jane Eyre "Joan was defeated by her beauty." How's that for a remark? Mother never could express pride in either of her daughters.

A lot like my own mother!
During the 1960s, she continued her stage appearances in several productions, among them Private Lives, Cactus Flower and an Austrian production of The Lion in Winter. Her last theatrical film was The Witches (1966), which she also co-produced. She continued appearing in film and television roles throughout the 1970s and 1980s, and was nominated for an Emmy Award for the soap opera, Ryan's Hope in 1980.Well, if I was to cover all of Joan's career and life, this blog would be longer than it already is! Order Joan's book, No Bed of Roses, rent a Joan Fontaine movie and have a great weekend! Till tomorrow...
The biographical facts of this blog are from Wikipedia. NO COPYRIGHT INFRINGEMENTS INTENDED IN THIS BLOG!


Thank you, to ALL of the artists in this blog! I love you!!

Now, GO OUT AND DO SOMETHING FOR SOMEONE ELSE TONIGHT!
Become A Facebook friend of mine! Follow me on Twitter
If you've seen one of my appearances/shows, add your thoughts to my guestbook at www.RichardSkipper.com


Tomorrow's blog will be about...YOU TELL ME!!! I'm also seeking a video question for tomorrow!


Please contribute to the DR. CAROL CHANNING &  HARRY KULLIJIAN FOUNDATION FOR THE ARTS 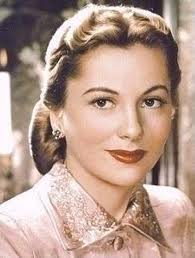 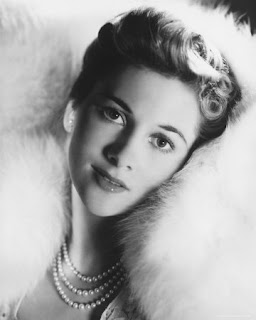 Posted by RichardSkipper at 12:44 PM