A Touch Of Oscar Gold! 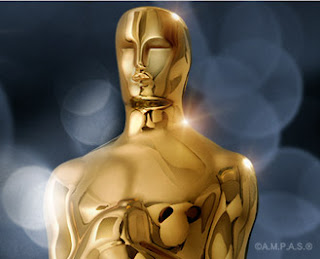 "When I was 19 years old, I was the number one star of the world for two years; when I was 40, nobody wanted me; I couldn't get a job."
Mickey Rooney


I hope you are having a creative day. One week from tonight is the Academy Awards. Everyone will be tuning in to see who wins, who "loses", and who will be wearing what.


Despite what the Wall Street Journal says, our awards are the best-kept secret in America, with the possible exception of what George W. Bush did in the Seventies.
Billy Crystal


When I was a kid, because I originally desired to be a movie star, I watched the Oscars year after year. I still watch the Oscars. However, they don't have the same excitement for me that they once had. I don't see those that are taking home the Oscars affecting me the way that Bette Davis, Joan Crawford, Vivian Leigh, Doris Day, and so many others have touched me over the years.
What happened? The spontaneity, GREAT production numbers, and w"what will happen" this year are all gone...at least for me. I TRY to see as many of the films as possible although I very rarely succeed. I do have a few friends over and I enjoy the company whether or not I'm moved by the Oscar telecast. Today, I want to share with you a wonder recent Oscar happening and a few Oscar highlights submitted to me through Facebook. One thing is certain. Movies impact ALL of us. For that, artists deserve to be recognized.

Friday night, Gone With The Wind was shown once again on Turner Classic Movies. No denying that this is one of the greatest movies ever made. It epitomizes to me the magic of what Hollywood was all about. The star power of ALL of the stars who were all able to maintain incredible careers.

In 1939 Hattie McDaniel became the first African American to win an Academy Award. McDaniel received the Oscar for her performance as Mammy in Gone With the Wind. Like Stepin Fetchit, McDaniel was criticized by the National Association for the Advancement of Colored People (NAACP) for taking a role portraying the stereotype of a servile mammy. As McDaniel was one of the best known black actors of that period and she built her career by playing servants, she was a natural target for the NAACP.

During the 1930s and 1940s the NAACP put a great deal of effort into addressing the negative portrayals of African Americans in film and radio. In many instances this effort to change social norms resulted in direct confrontations with black actors who were viewed as letting down their race.(Source: Oxford African American Studies Center)

For the first time, you can actually see the losers turn green.
Bob Hope at the 1965 Academy Awards, the first year they were telecast in color 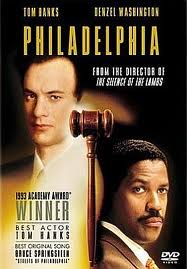 Philadelphia is a 1993 American drama film and one of the first mainstream Hollywood films to acknowledge HIV/AIDS, homosexuality and homophobia. It was written by Ron Nyswaner and directed by Jonathan Demme. The film stars Tom Hanks and Denzel Washington. It was inspired in part by the story of Geoffrey Bowers, an attorney who in 1987 sued the law firm Baker and McKenzie for wrongful dismissal in one of the first AIDS discrimination cases. 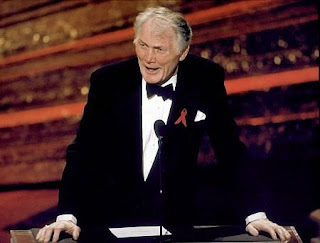 2002: Jack Palance and his one-armed pushups was a fun Oscar moment. A terrific character actor who for decades made a living playing the quintessential "bad guy," Palance hit it really big with new audiences with his tongue in cheek characterization in City Slickers. His Oscar acceptance speech followed by host Billy Crystal's interjections, "I said Decaf, Jack, Decaf," made for a very entertaining Oscar broadcast

David Niven commenting on the streaker!

In the 1997 telecast, Jessica Yu won for Best Documentary Short Subject (for "Breathing Lessons: The Life and Work of Mark O'Brien"), and in her acceptance speech she said, "You know you've entered new territory when you realize your outfit cost more than your film." (to me, this was not a funny moment or a glamor moment or an exciting spontaneous moment - it was a moment that said a lot about the world of glitzy Hollywood and awards shows and public image, and it spoke volumes about the commitment and artistry of filmmakers who just want to work and tell a good story and move people - movie-making shouldn't be about budgets, it should be about craft)

This past year, I have written on more than one occasion about one of my favorite Academy Award winners, George Chakiris). After that blog came out, George contacted me and said that if I was ever out in Hollywood, to look him up. It just so happened that I was going out to Hollywood and we met last month. I am in awe of his generosity of spirit. What I'm about to share with you proves that. On Thursday, February 16th, Red Line Tours (in conjunction with Partnership for Los Angeles Schools) hosted a field trip for a group of about 200 at-risk youth from Carver Middle School in South Los Angeles who are part of the AVID program (Advancement Via Individual Determination - www.avid.org.)

Many of the children have been or are currently homeless, and most have never ventured outside of their own neighborhood. The film history themed trip took the kids to the historic Los Angeles theatre in downtown LA, whose marquee pays loving tribute to Whitney Houston, and on tours of The Chinese and Egyptian Theatres.


They then walked to the Kodak Theatre where they were given the rare experience of holding and being photographed with the Oscar won by Academy Award Winner George Chakiris, who was present along with actress Romi Dames (of Hanna Montana) to address the kids. This is the second field trip that Red Line Tours has hosted as part of an effort to create an ongoing outreach for Los Angeles' at risk youth.

Randy Haberkamp of the Academy of Motion Pictures Arts and Sciences (AMPAS) was on hand to give the students a little history and share fun facts about the Academy and its ultimate tribute - The Academy Award (aka Oscar.)

Event co-coordinator and owner of Red Line Tours, Tony Hoover, then welcomed the students and teachers to the Kodak Theatre and gave a little background on the structure itself, prior to introducing Romi Dames. Students reacted with cheers once Dames, who played the snotty Traci Van Horn on Hanna Montana for seven years, slipped into her character¹s trademark nasal voice.  "This man is the definition of a triple threat. He can act, sing and boy can he dance," Ms. Dames said of George Chakiris as he joined her.  Chakiris shared a story from his early years about walking down Hollywood Blvd from his apartment to his dance classes everyday, which allowed him to pass Grauman's Chinese Theatre and contemplate the glorious history of films that had premiered there and the glamour of those whose foot and hand prints would forever grace the cement in the theatre's forecourt. He said, “I couldn't have imagined that one day I would be attending a film premiere of my own here.” Referring to “Westside Story," a movie
for which he won an Academy Award for Best Supporting Actor. "The honor I recently received, along with my friends Rita Moreno and Russ Tamblyn, by placing our foot prints along with my idols at Graumans makes me feel like my career has come full circle." The placement of the hand and foot prints just earlier that day was particularly meaningful, when he realized that they had been placed next to "WestSide Story" co-star, Natalie Wood.

After investigating the theatre forecourt for other classic and current talent, the students were particularly drawn to the foot, hand and wand prints from the cast of “Harry Potter,” they ventured in doors to watch the current release of “Adventure 2.”

Chakiris, whose has gone from Silver Screen to Sterling Silver, designing his own jewelry collection (http://www.georgechakiris.com), took great pleasure in allowing each and every student the opportunity to hold and to be photographed with his own Academy Award from 1962.


"Receiving this award brought me great pride, but being able to share it with the boys and girls from Carver Middle School offered a sense of joy that can't be expressed in words."  Ms. Dames added, "I just loved talking to the students.  They had a million wonderful questions and think I have 200 more facebook friends now."

Red Line Tours Hollywood Behind the Scenes is undisputedly one of Hollywood's most popular and enduring attractions and has become part of Hollywood's modern history. Actor Joseph Gordon-Levitt used Red Line Tours Downtown LA tour to help prepare for his role in “500 Days of Summer,” and Clare Danes toured with founder Tony Hoover as part of a piece on her early days in theatre.
Red Line Tours Founder, Tony Hoover received a BFA from Ball State University. A degree in and a passion for architecture led to his interest in Los Angeles structures, which in turn gave him a love for the illustrious history behind the movie capital of the world.  Clearly others share his admiration for Hollywood and it's past as Red Line Tours books has been booking tours for individuals and groups for more than a decade.  For information go to http://www.redlinetours.com/redline/hbs.php

Carver Middle School's mission is to provide a safe, clean, supportive, engaging and challenging learning environment that supports all students and prepares them for academic, social and personal success. Their philosophy is they value diversity, equity, educational excellence and collaborative relationships between school staff, students, parents and the community. All students can and must succeed in school regardless of their economic or family situation.  www.carverms.org
The Partnership for Los Angeles Schools is a unique collaboration between the City of Los Angeles and the Los Angeles Unified School District to turnaround LA's lowest performing schools and to create a model for doing so district wide. Today it is one of the largest public school turnaround projects in the nation, serving nearly 17,000 students across 22 schools in some of the city's poorest communities.
(Source of this event, Harlan Boll,
Photo Credits: BILL DOW)


That is what is ALL about! Who knows? Perhaps our next Oscar winners are in that class? Maybe thet were inspired to pursue their dreams. THAT is why we HAVE to nurture arts in education! I, for one, am not going to allow that parade pass by our current students. I will also be watching the Oscars next week that will inspire inclusion here next year!

Tomorrow's's blog will be... My Exclusive Interview with Roberta Olden (Ginger Roger's Personal Assistant) on Ginger in Hello, Dolly!

Here's to an INCREDIBLE tomorrow for ALL...with NO challenges!
Now, GO OUT AND see Carol Channing: Larger Than Life  now in theatres.


This Blog is dedicated to ALL Oscar nominees and winners, past, present, and future...and to all of those that were never nominated and the gifts they give to the world

Email Post
Labels: Billy Crystal built her career by playing servants During the 1930s and 1940s the NAACP put a great deal of effort into addressing Mickey Rooney Oscar Gold she was a natural target for the NAACP