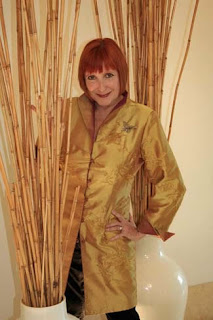 Your visions will become clear only when you can look into your own heart. Who looks outside, dreams; who looks inside, awake. ~  C.G. Jung.

March 11th, 2018!
March 11 is the 70th day of the year. There are 295 days remaining until the end of the year.  is a gorgeous day here in New York. My horoscope this morning reads: No matter how confused and chaotic events may be you remain the personification of calm – nothing, but nothing ruffles your feathers. Others can run around like headless chickens if they want today but you will float serenely above the cares of the world.  If only you knew!
In any case, today I continue my celebration of Cabaret Month with a tribute to Spider Saloff.
I first became familiar with Spider through my formative cabaret years. I first saw her perform at The Five Oaks, a magical place in a time that no longer exists here in New York. Others have tried to replicate it but it was the perfect alchemy of time, place, and characters who came together that 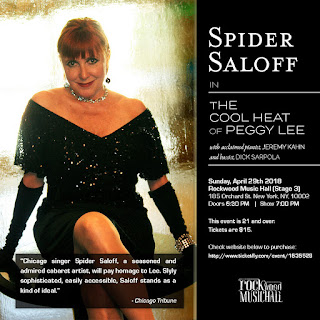 created pure gold. It was also around that time that Spider appeared with her frequent co-star, Ricky Ritzel.
When Spider left New York, it was a sad time for all of us. She will be returning to New York on April 29th for a new show celebrating one of my favorite singers, Peggy Lee! 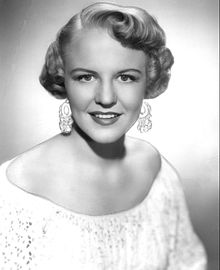 Spider returns to New York in a rare appearance with a brand new show. In it's New York Debut, Saloffs' "The Cool Heat of Peggy Lee"  concert includes Lee's classic jazz hits as well her pop music classics. Saloff presents all of this with her unique comic wit and a contemporary twist that will appeal to audiences of all ages!
Songs include Lover, Why Don’t You Do Right?, The Best is Yet to Come, and the classic, "Is That All There Is? ." Joining Spider for this very special concert are pianist Jeremy Khan and bassist is Dick Sarpola.  This concert debuted summer of 2017 to sold-out audiences at Ravinia Music Festival.
Peggy Lee still remains a music icon, Miss Peggy Lee. Singer, songwriter, actress, star of film and television and as co-creator and vocal star of “Lady and the Tramp”. She was the first person to win a lawsuit against Disney and was a trailblazer! Spider Saloff pays homage to the smoldering understated style of Peggy Lee, tracing her story from her humble beginnings 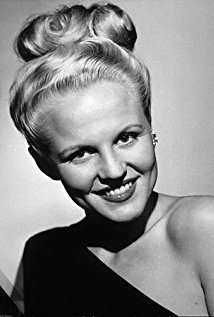 through the glamour of the 1950’s and 60’s and her continued chart breaking recordings.

Saloff was honored this past year by the prestigious Bistro Awards for her contributions to the world of Jazz. Her concert career includes recent performances at the Poznan Poland Jazz Fest, The Pheasantry in London, as well as Jazz at Lincoln Center, Overture Center, Ravinia Music Festival, The Auditorium Theater, and the Smithsonian Institution. Her major nightclub engagements included turns in Chicago at The Green Mill and Jazz Showcase and in New York at Birdland and Feinstein’s among many others nationwide.

Spider Saloff has a wicked way with a lyric and a glint of well-controlled mischief.
–The New York Times

She is dynamic, a powerhouse of passion!
–San Francisco Examiner

Peggy Lee was the superb jazz-pop singer smoldered in 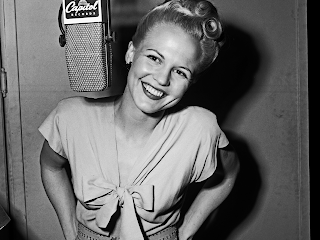 Spider Saloff puts her own stamp on the music, and that’s the kind of intelligent, creative artistry that sets the gold standard for any kind of live entertainment.
-Marilyn Lester, Cabaret Scenes

Spider has been heard around the world as the host/ star of the syndicated public radio series Words and Music, but for thousands, the 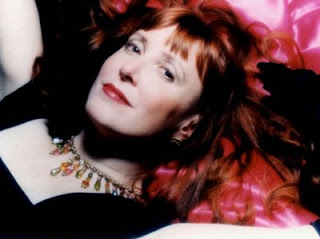 most familiar way to enjoy the jazz stylings of Spider Saloff has been through live performances.  The Chicago –based jazz vocalist has won accolades around the world for her introspective approach to the genre, most profoundly through her one-woman tribute to George Gershwin, The Memory of All That, conceived with the blessing of the Gershwin estate and headlining the Gershwin Centennial in St. Petersburg, Russia.

With full symphony orchestras or intimate jazz groups, Saloff is acclaimed as one of the great interpreters of the American 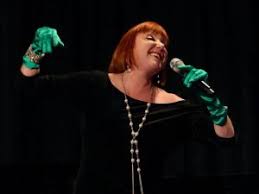 Songbook. Saloff has composed multiple concert tributes to Cole Porter, Irving Berlin, Stephen Sondheim and many others. With her vocal partners, Dee Alexander and Frieda Lee, she performed The 3 Ellas Tribute to Ella Fitzgerald to audiences of over 26,000 at Chicago’s Millennium Park as well as many other venues. 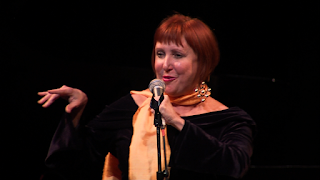 Her major nightclub engagements included turns in Chicago at The Green Mill and Jazz Showcase and in New York at Birdland and Feinstein’s among many others nationwide.

As composer, playwright, and actress, Saloff wrote a one-woman musical, The Roar of the Butterfly that played in Chicago, Los Angeles and Melbourne, Australia. Her original song When You See Me, a jazz/R and B tune has garnered over 100,000 views on YouTube. 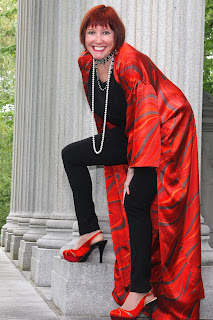 She has taught master-classes in the UK, Italy, and all over the US with private students and group classes.  Her philosophy in teaching is to work with the voice that is the individual and create a style that is unique and natural to that particular voice.  Students have described working with Spider as “life-changing”.


Her discography includes 9 national releases: 1938, Sextet, The Memory of All That, Cool Yule ,A New Set of Standards, The Women Who Swing Chicago, Like Glass, Cole Porter Live at Maxim’s, Ella, Ella, Ella: A Musical Tribute to Ella Fitzgerald.  Her Christmas CD entitled Cool Yule was a finalist for the Indie Awards.

Here are some things you may or may not know about Spider Saloff!

What is your idea of happiness?
Performing , cooking, being surrounded by friends, cocktails and great food!
What is your life mantra? 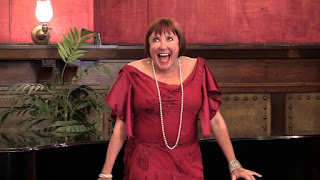 Be here now and enjoy the hell out of it

How did you come up with the set list for your show?
Went through and started with my favorite Peggy songs and ones that were landmarks in her career and developed from there


What is your show-day ritual?
Have a nice breakfast or lunch, chill out most of the day, dress up and go do it.
Who are your biggest musical influences?
Ella Fitzgerald, Mark Murphy, Johnny Hartman, Peggy Lee, Django Reinhardt,
Shirley Horn

Why don't cabaret shows attract more of the public, in your opinion?
A lot of people don’t understand what it is and think it is just old music. And the term
has become such a broad one, they don’t know what to trust to see.
How did The Cool Heat of Peggy Lee come about?
I have always loved her and when my good friend, James Gavin, wrote her biography, I really became fascinated. 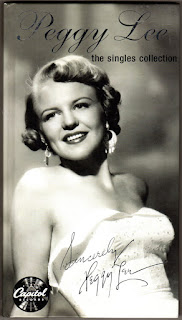 What keeps you motivated?
The fact that I can always create something new!

If you could be known and celebrated for one thing, what would it be?
Motivating people to do what they love.

What’s something about cabaret that fascinates you?
The freedom of creating whatever I want to create.
If there were no barriers to entry, what is one thing 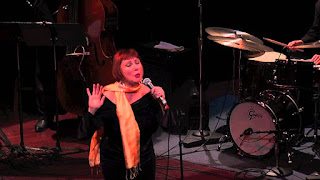 you would be doing?
Film acting

If you could describe yourself in one word what would it be?
Joyful

What is one instance of knowing you are living in your vision?
Waking up and knowing that I am creating my life through my work and who I am.
The fact that I can teach and excite people about expression, or move someone that comes to a performance, or tell a story in one of my 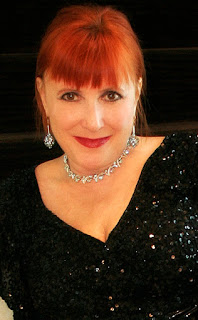 podcasts that someone hears and says that it inspired them. “ Who could ask for anything more?”
What is your favorite anecdote that has happened to you in your career?
There are too many crazy things. But here are a couple.
When Ricky Ritzel and I were asked by George Gershwin’s family if we would be “willing” to come do a performance at their home. What??? And then it happened which led to a life-changing experience.
And long ago when I was playing Guinevere in Camelot and my Great Dane was playing Horrid the dog.
He did not care for going outside in the snow, so he “saved himself” so to speak for when he was center stage and took a huge dump. King Arthur then entered with the groundbreaking shovel from the lobby and announced: “Jenny, I’ve arrived with the royal pooper scooper!” I think the laughs went on for about 15 min! But it ended my dog’s career.
When can we expect your next CD?
I have no idea. Somewhere between the end of this year and the 12th of never!

Do you think of yourself as a happy person?
YES! MEOW!

Name one person you would like to see profiled in my blog
Ricky Ritzel
What is your favorite “escape” in NYC?
The lobby of the Algonquin
Anything else you wish included? 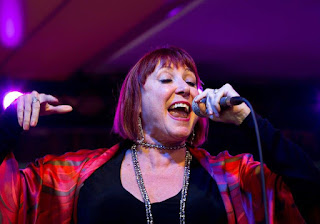 Thank you, to ALL who are mentioned in this blog for gifts you have given to the world and will continue to give

What a wonderful way to kick off the week! My daughters and I felt the magic, and for me, I took a wonderful stroll down memory lane. Thanks Richard for all that you do and for putting together such a wonderful show, we'll be back!
Rich Braaten Richfield, CT.

Richard Skipper Celebrates was a rich experience.  My husband, Stuart Allyn and I had an inspiring time- so happy to have been a part of it.  Such vibrant, passionate and compassionate people- lively, intelligent and heartfelt discussion, unexpected and memorable insights, in a delightful atmosphere.  Thank you for putting us together and stirring us up in your inimitable way.  I am still thinking about things that were said, ideas explored, memories shared.
Carole Demas


Bravo and thank You for the spectacular, intimate conversation with Melissa Manchester. It was so warm, flowing easily with mutual respect and affection.The most real and down to earth interview I have seen ever, truly! We Fanchesters thank you sooo much for letting us get to know our so loved Melissa on such a personal level.
Cathy Baker, "Fanchesters Are Us" Fan and Photo page, Facebook 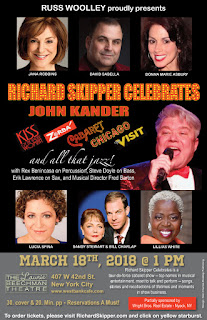 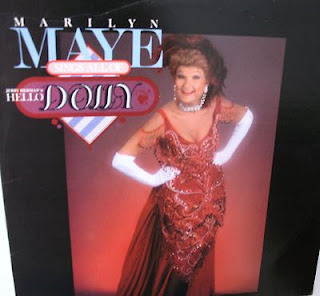 Posted by RichardSkipper at 6:30 PM