One day during shooting ["What's New Pussycat"], I just climbed up the ropes to the catwalk and started walking the beams. Very loudly and clearly I called down to everyone on the set, 'I'm going to jump.' A French technician grabbed me, and there I was, hanging by one arm. [After transfer to the Payne Whitney Psychiatric Clinic in New York]: It was horrendous. You're crazy because they say you're crazy. It was especially horrible because I couldn't figure out how to do what they wanted me to so I could get out.
-Paula Prentiss

Happy Friday, March 4th, 2016,
March 4 is the 64rd day of the year in the Gregorian calendar.
Advice for today: Through it all, learn how to win the game before the toss, life is but a treadmill, learn how to walk the walk.
How many of you watched Romney's speech yesterday and/or the Republican debate last night?
We spend a lot of time talking about why we support Bernie Sanders or Hillary Clinton. But after thedust settles, we must get behind the nominee and defeat Donald Trump or whoever Republicansnominate.
It’s happening. Despite his dangerous platform based on racism, fear-mongering and hate, Donald Trump continues to dominate as the front-runner in the Republican presidential primary.

Today is the birthday of Paula Prentiss, one of my favorite actresses. The above quote truly saddened AND touched me this AM when I read it. How many people working in the business today that we are idolizing are battling depression. Fame and success does not always equate happiness. Be careful what you wish for. You may surely attain it! She is best known for her film roles in Where the Boys Are, Man's Favorite Sport?, The Stepford Wives, What's New Pussycat?, The Black Marble, and The 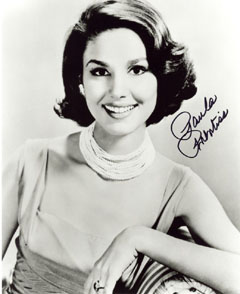 Parallax View,and the cult television series He and She. She was born in San Antonio, Texas.

She is the daughter of Paulene (née Gardner) and Thomas J. Ragusa, a Social Sciences professor at San Antonio's University of the Incarnate Word, who was of Sicilian descent. Today is also the birthday of Steven Weber.  He is most known for his role as Brian Hackett in the television show Wings, and is currently on NCIS: New Orleans. He has worked with Rob Thomas before when Weber guest-starred on Party Down.  This Queens-born actor has certainly proven himself adept at everything from quirky comedy to flat-out melodrama. Born on March 4, 1961, to a Borscht Belt comic and a nightclub singer, Weber was already appearing in TV commercials by elementary school age. He later studied at the High School of the Performing Arts in New York and graduated from New York State University.
The fair-haired, fair-skinned actor worked a series of menial jobs during his salad days as a struggling thespian (custodian, elevator 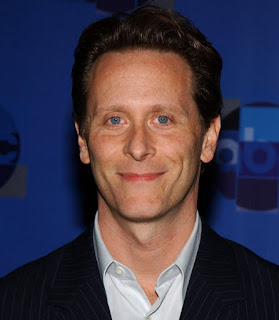 operator, singing waiter) until earning his break on TV in a presentation of one of Mark Twain's stories.
Quickly making his film debut in the popular comedy The Flamingo Kid (1984), he nabbed a running role on the soap opera As the World Turns a year later. On the set he met first wife Finn Carter, another co-star on the daytime drama. Steven stayed put for a year then went on to gain recognition in more offbeat and/or prestigious productions on film and prime time TV.
He played a rock star in the thoroughly offbeat foreign-made film Los ángeles (1990) and showed real command as John F. Kennedy in the epic miniseries The Kennedys of Massachusetts (1990).
On this date in 1966, John Lennon of the Beatles was quoted in the London Evening Standard as saying, "We're more popular than Jesus now; I don't know which will go first-rock 'n' roll or Christianity."
On this date in 1974,  People magazine is published for 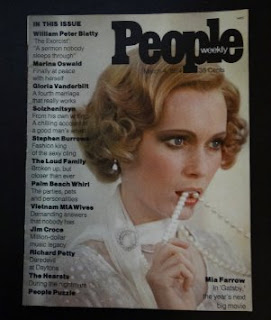 the first time in the United States as People Weekly.
Fun fact for the day: Couples who own pets are less stressed by conflicts and recover quicker when conflicts occur.
On this date in 1975: Comic genius Chaplin is knighted
Silent film legend Charlie Chaplin has become Sir Charles after a ceremony at Buckingham Palace.
Other Famous Birthdays today:
1913 – John Garfield, American actor and singer (d. 1952).
American actor John Garfield, when judged by looks and attitude alone, seemed more the pugnacious, defiant urban thug than one of Hollywood's most respected dramatic actors of the '30s and '40s. As evidence of his popularity, despite the fact that many insiders considered Garfield's personal ways and beliefs a bit radical, the attendance at his funeral in 1952 broke the records set at Rudolph Valentino's funeral.
1934 – Barbara McNair, American singer and actress (d. 2007)
1969 – Chaz Bono, American advocate, writer, musician and actor

Transitions
1994 – John Candy, Canadian comedian and actor (b. 1950)
1996 – Minnie Pearl, American comedian and singer (b. 1912). Sarah Ophelia Colley Cannon (October 25, 1912 – March 4, 1996), known professionally as Minnie Pearl, was an American country comedian who appeared at the Grand Ole Opry for more than 50 years (from 1940 to 1991) and on the television show Hee Haw from 1969 to 1991.
2009 – Horton Foote, American playwright and screenwriter (b. 1916).
March 4th, 1961...the year I was born. It was Saturday, under the sign of Pisces. The US president was John F. Kennedy (Democratic). In that special week of March people in US were listening to Pony Time by Chubby Checker. In UK Are You Lonesome Tonight? by Elvis Presley was in the top 5 hits.
L'avventura, directed by Michelangelo Antonioni, released in 1961 whilewas one of the most viewed movies. Advise And Consent by Allen Drury was one of the best selling books.

In Entertainment News
The Bridgehampton Museum’s Art of Song/Parlor Jazz series will present “Secret Love,” a tribute to the music of Doris Day by Karen Oberlin, on Saturday at 7:30 p.m. in the museum’s archive building. 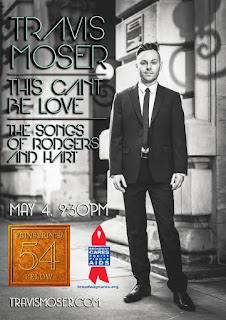 Travis Moser is performing a new version of his show at Feinstein’s/54 Below on Wednesday, May 4th @ 9:30pm.  He has teamed up with Broadway Cares/Equity Fights AIDS, so proceeds from the show go directly to them.

He will be joined by special guest Samantha Shafer (Broadway’s Rocky - The Musical, West Side Story, Women on the Verge of a Nervous Breakdown, etc.) and musical director Steven Silverstein!

You’ll be hearing brand new arrangements and mash-ups of some of Rodgers and Hart’s most beloved songs…and maybe a sliver of Billy Joel.  (Photo by Darren Cox)
There’s a Streisand medley. There’s a special guest. Lets make America great again, one cabaret show at a time.

Hello, much-missed mayhem and Merman .. and good ol' Musical Comedy—it's so nice to have you all back where you belong!
Filled with affectionate jabs at life on the stage and backstage (without much back-stabbing), we've got the bright, bouncy story of eager, wide-eyed 12-year-old Muriel, a major fan of Broadway's Ethel Merman. The CD is Merman's Apprentice. Read Rob Lester's Review HERE.

Speaking of Ethel Merman... “There’s no business like show business” is a song that Ethel Merman belted out like nobody’s business.She’s gone, but Rita McKenzie keeps the big voice and personality alive with her “Ethel Merman’s Broadway!”Invisible Theatre brings her to town for two shows this weekend at the Berger Performing Arts Center, 12000 W. Speedway. Expect lots of great songs, and an intimate look at Merman’s life.Performances are 7:30 p.m. Saturday, March 5, and 3 p.m. Sunday, March 6. Tickets are $40 at 882-9721 or invisibletheatre.com. 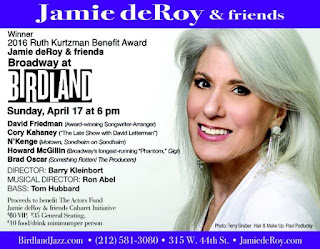 After receiving her bachelor's degree from Northwestern University, actress Kristine Nielsen embarked on a successful East Coast acting career that left her no time to look back toward the Midwest — until now. When Chicago's Goodman Theatre approached the Vanya and Sonia and Masha and Spike Tony nominee about starring in their production of Thornton Wilder's The Matchmaker, it was an offer she felt she couldn't refuse. (Read MORE).


Thank to ALL of the artists mentioned in this blog for the gifts they have given to the world and continue to give! 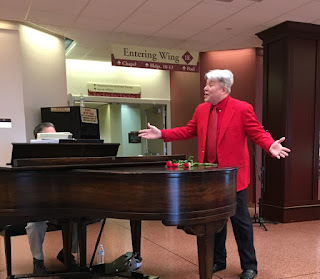 
David Meulemans returns in Lucky To Be Me! Directed by the incredible Sally Mayes with great musical direction by Tex Arnold. David will take all of us on a great musical romp through the ups and downs of his life.David Meulemans combines a love for the American Songbook with his classically trained voice to entertain audiences from Miami to New York, London and around the nation.  In a recent review, Charles Truenski describes David’s performance of “Lucky to Be Me” at Manhattan’s Metropolitan Room, as “a perfect night of cabaret” stating this is the kind of cabaret New York City needs more of.  A popular leading man in South Florida musical theatre, David brings his comfortable style, passion for music and remarkable vocal talents to every project he tackles, with humor, heart and joy.
This show WILL sell out! So reserve today and be a part of his star studded audience!
This is a CD Release Event! ALL in attendance rwill receive complementary copy of Lucky To Be Me: Recorded LIVE at the Metropolitan Room August 22nd, 2015


http://metropolitanroom.com/event.cfm?id=222431
MARCH 19th in NYC
Richard Skipper Celebrates is the publicist for David Meulemans and Lucky To Be Me at NYC's Metropolitan Room. ! For press reservations, interview requests, or more information, contact Richard Skipper at Richard@RichardSkipper.com or 845-365-0720


Posted by RichardSkipper at 5:09 PM