Do the thing you think you cannot do. Fail at it-try again. The only people who never tumble are those who never mount the high wire. Oprah

Happy Thursday, March 31st, 2016!
March 31 is the91st in this year's calendar. There are 275 days remaining until the end of the year.
Today is the last day in March? Is it going out like a lion? Only the day will tell. As I begin my blog, I am listening to Carol Skarimbas sing a Cole Porter medley on YouTube. I loved her as Heidi in the Papermill Playhouse's production of Follies in 1998. It feels like it was yesterday. It was a disappointment to both the audiences and cast alike that THIS  production did not make its way to Broadway.
Carol has had a marvelous career and I am thrilled that we will be sharing a stage together in May.
Based on my blogs and philosophy of life, the show will be called Richard Skipper Celebrates. It just so happens that our first show in what I hope will be an ongoing series.
The date of the show is May 25th at The Triad. The premise is that every day is a celebration. There are hidden gems in every day. I desire each show to be a party with a sense of an old fashioned talk/variety show.
One of the gems of May 25th is that it is Beverly Sills' birthday. I have both Anna Bergman (who will 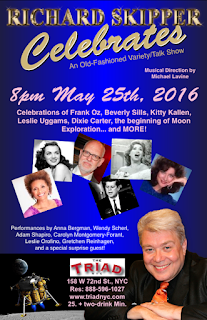 be performing with William Hicks, the accompanist for the late Luciano Pavarotti) and Carol Skarimbas.  Carol appeared with Beverly Sills.

I sang many performances with Beverly at NYCO.But one of the best was in Baltimore, where we were performing Don Giovanni. There was a snow storm, and I had my two young sons with me. The baby-sitter was a nightmare, so I discharged her. We had to walk to the theatre in the snow, and Beverly took the hand of one of my sons, and I took the other. I will never forget that moment, knowing that she had a son with autism. My tears are of wonderful memories, and of the incredible gift she gave to the world of opera. Carol Skarimbas
Beverly Sills is best known for her soprano voice as an opera performer. After many successful decades, she made her debut with the Met in 1975. The passing of Beverly Sills at age 78 produced an outpouring of response from the cultural institutions she led: the City Opera, Lincoln Center for the Performing Arts and the Metropolitan Opera.
Most recently, Carol was appearing with Larry Woodard in their highly acclaimed show, I Feel a Song Coming On. She has appeared with the Philly Pops. She sings at six places-nursing, assisted living--Actors Home and three Jewish Homes in NJ. VERY rewarding!!

There are many other surprises in store! I hope that you will reserve and follow my blog in the weeks leading up to the show, I will be showcasing many of the artists here. IF the show is a success, I hope to turn this into a monthly celebration. I also am anxious to meet many of my followers at the show(s).
Richard Skipper Celebrates May 25th! He will be joined by Anna Bergman, Leslie Orofino, Wendy Scherl  and an all star cast celebrating the many gems of May 25th at The Triad in NYC 8PM Show... Reservations a MUST!
You Never Know Who You Might See There OR what might happen! Click HERE to order your tickets!
Also from Carol: Singing to honor the birthday of Beverly Sills fills my heart.  I sang many performances with her, not to mention her help for me and my two sons (2 and 3 !!) during the big snow storm in Baltimore when we sang in Don Giovanni. Baby-sitter could not make it, so Beverly held one hand and I the other. Together we all trudged to the orchestra rehearsal and laughed the whole way!!  She was a gem. xo

Before we get to May 25th, let's celebrate TODAY! It is the birthday of Richard Chamberlain.
Stephen Cole sent me this:
Hi Richard, I got to work with Richard Chamberlain when I wrote and ghost-directed (yes!) a huge industrial called Masques of Melancholia for the American Psychiatric Association and Burroughs-Welcome. The cast was Anne Jackson, Eli Wallach and Chamberlain and they did potted 15 minute versions of the classic that showed depression in plays and literature...ie. Uncle Vanya, Hamlet, King Lear, Madam Bovary etc. Chamberlain was a delight and very professional. I was able to give him on VHS tape the silent footage I had of the musical Breakfast At Tiffany's and he was thrilled to get it.
In fact, that silent footage with the sound that I put on it, is on his very own youtube page (also scenes from Masques)

Today in 1967 was the mono mixing for The Beatles' song With A Little Help From My Friends.

Deborah Vivien Cavendish, Duchess of Devonshire, (born Freeman-Mitford; 31 March 1920 – 24 September 2014) was an English writer, memoirist and socialite.
She was the youngest and last surviving of the six Mitford sisters, who were prominent members of English society in the 1930s and 1940s.
Today is also the birthday of Shirley Jones.
Interestingly enough, Oklahoma! opened on this date in  1943. Oscar Hammerstein II originally titled Away We Go! Shirley Jones, of course, went on to star in the film adaptation, her screen debut.
Oklahoma! is the first musical written by the team of composer Richard Rodgers and librettist Oscar Hammerstein II. The musical is based on Lynn Riggs' 1931 play, Green Grow the Lilacs. It was named for the popular folk song of the same name.
It was performed 64 times on Broadway, opening on January 26, 1931 and closing March 21, 1931. It also played January 19, 1931 through January 24, 1931 at the National Theatre in Washington, D.C. It was produced by the Theatre Guild and directed by Herbert J. Biberman. Rather startlingly, the debonair, ultrasophisticated actor Franchot Tone portrayed cowboy Curly. June Walker was seen as his sweetheart Laurey. Tex Ritter sang four songs in the role of Cord Elam and was understudy for the lead part as Curly, though he never had occasion to perform in that role. Set in Oklahoma Territory outside the town of Claremore in 1906, it tells the story of cowboy Curly McLain and his romance with farm girl Laurey Williams. A secondary romance concerns cowboy Will Parker and his flirtatious fiancée, Ado Annie. 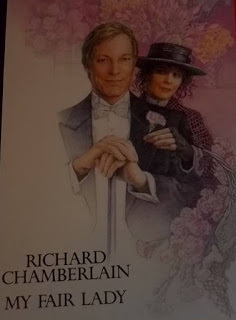 Robert Stevenson (31 March 1905, Buxton, Derbyshire – 30 April 1986) was an English film writer and director. He was educated at Cambridge University where he became the president of both the Liberal Club and the Cambridge Union Society.
After directing a number of British films, including King Solomon's Mines (1937), he was given a contract by David O. Selznick and moved to Hollywood in the 1940s. He ended up directing 19 films for the Walt Disney Company in the 1960s and 1970s. Stevenson is best remembered for directing the Julie Andrews musical Mary Poppins, for which Andrews won the Academy Award for Best Actress and Stevenson was nominated for Best Director. With Disney, he also directed the first two Herbie films, The Love Bug (1968) and Herbie Rides Again (1974), as well as Bedknobs and Broomsticks (1971). Three of his films featured English actor David Tomlinson.

Don't hold to anger, hurt or pain. They steal your energy and keep you from love. - Leo Buscaglia

Only the weak are cruel. Gentleness can only be expected from the strong. - Leo Buscaglia 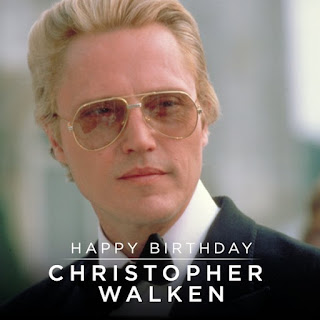 Posted by RichardSkipper at 6:43 PM