MARILYN MADNESS AND ME and the Multi Million Dollar Marilyn Exhibi

Marilyn Monroe is one of those iconic STARS that will live beyond all of us. Books, movies, television shows, and even stage depictions keep her in the public consciousness like no other. A new show has opened in Hollywood (where else should this show premiere?) giving us yet another glimpse into her world and psyche. 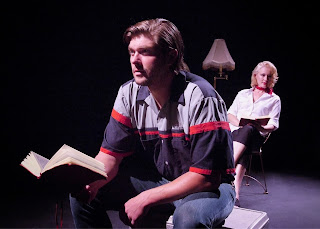 A new show and exhibit opened on September 26th and movie and television icons were there to celebrate Marilyn.Among the guests attending the opening night gala for the West Coast theatrical premiere of  MARILYN MADNESS AND ME were those who worked with the plays subject matter, Marilyn Monroe, such as Dawn Wells who appeared as an extra in Monroe's last film, The Misfits and Oscar winner George Chakiris, who danced with Monroe in Gentlemen Prefer Blondes.


Owner and curator of The Hollywood Museum (http://www.thehollywoodmuseum.com), Donelle Dadigan, was on hand to give patrons a very special experience with a display of items, valued in excess of $2 million, from the personal collection of Marilyn Monroe and on loan from the museum  (i.e. Marilyn's dress worn to greet the US service men and on her honeymoon with Joe DiMaggio, jewelry, an original copy of the LA Times declaring “Marilyn Monroe Found Dead,” the medicine found on Marilyn's bedside table the night she died and more, etc.)

The writer who gave television some of its favorite moments in entertainment with Flamingo Road, “Dallas,” “Falcon Crest,” “The Colbys,” “General Hospital,” and "Dynasty," Frank V. Furino, has brought Marilyn Monroe back to life ... on stage in “Marylin … MADNESS & Me,” which is based on an original concept by Didier Bloch, under the direction of Joe Leonardo and opened in the Monroe Forum at the El Portal Theatre on Sept 26th. 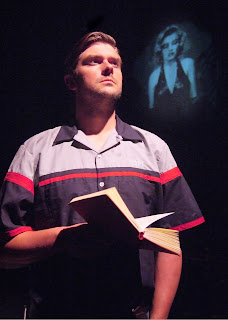 The El Portal Theatre is proud to present a poignant, compelling, and shocking tale of unrequited love, centered around the last months of Marilyn Monroe's life as told in first-person style, by a man who became obsessed with Norma Jean Baker, and dramatized by the use of fictional excerpts from Marilyn's diary.  Frank V. Furino's Marilyn … MADNESS and Me, starring Adam Meyer and introducing Alison Janes, who brings the very essence of Marilyn to life, puts a revealing spotlight on a career that has mesmerized the world for generations.


Enlightening Monroe moments and exposed facts include the concept that “Marilyn Monroe” was a character that Norma Jean turned on when in public and turned off while in private, how Marilyn would stuttered when she was stressed and how embarrassed Norma Jean was when she misspelled “Marilyn Monroe,”the first time she signed an autograph as Marilyn.
The script also brings to light that despite her worldwide fame and box office power, Marilyn was never paid more than $100,000 for any film, while her contemporary, Elizabeth Taylor, could garner $1 million for a film.


"I was extremely impressed with Adam Meyer's work in this production," remarked George Chakiris.
"Great theatre and a great exhibit ... My senses are overjoyed." added Dawn Wells.
"Mr. Furino's dramatic use of fictional excerpts from Marilyn's diary is inspirational," said Michael Learned.


"I'm a huge Marilyn fan, so I tend to be a little critical of how she is depicted. However, I loved Alison (Janes) portrayal and Furino's script is a love story to the great Monroe," says Judy Tenuta.
"Both Adam (Meyers) and Alison (Janes) have great futures ahead of them," comments Jane Kean "I loved the production and cant wait to visit the Hollywood Museum, after seeing the sample presentation in the theatre's lobby," offered Jerry Mathers.

WRITER/PRODUCER: Frank V. Furino is a successful writer and producer for primetime/daytime TV programs including “Flamingo Road,” “Dallas,” “Falcon Crest,” “The Colbys,” “General Hospital,” and more, in addition to being the Executive Story Editor on “Dynasty.” Co-Created and produced, “Nightingales” series for Spelling Productions/NBC. As the Director of Production for Dick Clark Productions he created, wrote and produced nationally syndicated programs and was a writer for ABC-TV's New Years Rockin' Eve.
As Vice-President, Diamond P Enterprises, he wrote and produced syndicated sports and entertainment shows and was voted Syndicated Country Music Broadcast Producer of the Year by Billboard Magazine.
As a staff director with ABC News/Sports, Frank worked along side Howard Cosell, Keith Jackson, Ted Koppel, Peter Jennings, and more, covering NFL Football, Championship Boxing, Auto Racing, Space Shots, Political Conventions and The Olympics.

DIRECTOR: Joe Leonardo's credits include It's Better with a Band in New York, London and Philadelphia “Me and My Girl,” “Grand Hotel,” “Sweeney Todd” (Joseph Jefferson Award Winner/1993) and Miss Saigon.

Leonardo's first production of “At Wit's End” received 11 Carbonell Award nominations (2001). As Artistic Director of NETworks, he has overseen the national tours of “Kiss of the Spider Woman,” “The Sound of Music,” “Stage Fair,” “Damn Yankees,” “Victor/Victoria,” “Big,” Show Boat, Annie, Jekyll and Hyde, Bully, The Civil War, Cirque Ingenieux, Cinderella, and Ragtime.
Mr. Leonardo is the Laura Carnell Professor of Theater and Director of Theater at Temple University in Philadelphia, producing twenty-four seasons and directing over thirty musicals and plays by such authors as Shakespeare, Moliere, Chekhov, Genet, Stoppard, Aeschylus, Sophocles, and Euripides.

ADAM MEYER (Tim) fell into acting in High School through a computer error with a cast list and has never looked back since. On the Antaeus Stage he has been seen in Mother Courage and her Children, Tonight at 8:30, King Lear, The Malcontent and Peace In Our Time.
Along with being a founding A2 Rep of the A2 ensemble, he has been seen in The Dumb Waiter, and The Thin Man in the A2 Ensemble Last Call productions. He has done Theatre all over the US at such reputable theatres as The Shakespeare Theatre of New Jersey, Williamstown Theatre Festival and Cortland Repertory Theatre. Some TV credits include: Untold Stories from the E.R. (TLC) and Ella and Me (Animal Planet). Some WEB credits include: Adam in A to B, (www.atobonline.com), Captain Amazing in The Sanctum, (www.santumsodes.com), and has appeared in many sketches on www.meyerbros.net .
He holds a BA in Theatre form Southern Illinois University at Carbondale. Much Thanks and Love to Rebecca Miller, Mom, Dad, Zack, and Mike.

ALISON JANES (Norma Jean/Marilyn), comes to this production with background in both film and theater.

On screen she had the leading roles in Morbid Minutes, Phantom of the Opera, The Twilight Zone: Curse of the Black Orlov - she also had supporting roles in “Matters of the Heart,” “The Mechanics,” “Nighthawks” and more. Her theater credits include the role of Violet in “It's a Wonderful Life,” Johanna in “Sweeney Todd,” Mabel in “Pirates of Penzance,” and Dawn Lovett in “Sidetracked.” Alison has also graced the opera stage with singing roles in productions of Die Fledermaus, Candide, Falstaff and more.
She is a graduate of DePaul University, Master of Music.  And just for good measure she speaks French, German, Italian, and Spanish.

El Portal Theatre is a historic landmark in the San Fernando Valley located in the heart of North Hollywood and sits across from the Academy of Television Arts and Sciences. Since it’s opening in 1926 -- first for Vaudeville, then Silent Movies, and then Academy Award-winning films. Chosen by the Smithsonian Institute as the venue for induction ceremonies to announce their first permanent Entertainment
History Exhibit, in the past ten years celebrities have starred in productions and musical reviews including Debbie Reynolds, Bea Arthur, Kitty Carlisle Hart, Charles Nelson Reilly, Ed Begley, Jr., Hal Linden, Carol Lawrence, Fred Savage, Sally Struthers, Charlotte Rae, Marnie Nixon, JoAnne Worley, Vicki Lewis, Carol Channing, The Manhattan Transfer, to name only a few and now the El Portal is thrilled to offer Rita McKenzie in “Ethel Merman’s Broadway.” For more information, please visit www.elportaltheatre.com

Thank you to Marilyn Monroe for the gifts you have given to the world and continue to give!

A special thank you to Harlan Boll for the contents used in this blog.

This Blog is dedicated to ALL THAT HAVE BEEN TOUCHED BY Marilyn Monroe and ANYONE who has EVER had a connection with her on ANY Level! 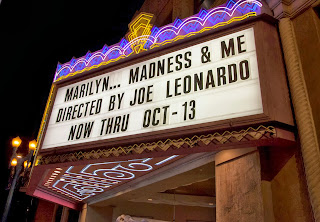 Posted by RichardSkipper at 3:01 PM No comments: