Trying to Find Rapture in Trying Times in the 'Little Things' 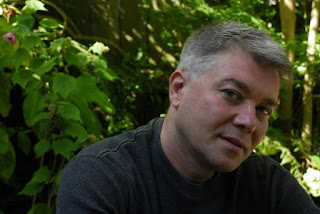 We are standing with a brand new frontier in front of us. It’s been a difficult two weeks for many of us. Every day, it seems there’s a new assault on the values that have historically defined what it means to be an American.
Photographer Francoise Gautier wrote, "More important than the quest of certainty is the quest for clarity." Looking forward to the next 8 Days! The WORD for the day is RAPTURE . Think of this word as your mantra for the day. First apply the word to yourself, THEN apply this word to EVERYONE YOU meet. Think of this word as you respond to EVERY POST you see throughout the day.
The word for TODAY is RAPTURE! Please pay it forward...

Today is Saturday, February 4th, 2017
My horoscope tells me today that Ingenious ideas are never far behind you unconventional Aquarians, but your mind is racing faster than ever as each new thought seems more vibrant than the last.
That describes me and where I am to a 't'. The world is changing at such break neck speed that it is sometimes difficult to make sense of it all.
Just hang on for the ride. The news cycle is changing so rapidly around us that as we are trying to make sense of the news item du jour, we are quickly hit with another news item that seems even more outlandish as what happened yesterday. It's impossible to process it all. But I am trying!
This is my birthday month! We stop to celebrate Black History Month. It is the month in which we celebrate two of our GREATEST Presidents, George Washington and Abraham Lincoln. It is the month of hearts and flowers. Both my mom and my second in line brother were born also in February. Some of my favorite people were born in February. It is the shortest month of the year and yet, it is jam packed with so much!
It is also the month in which a groundhog determines our fate...as far as how many more weeks of winter we will endure.
There are days in which the air is crisp and I actually love those kind of winter days. I also love the snowy days in which I can stay ensconced in my home on Valentine Avenue (yes, that's where I live!) in Sparkill (or I love to call it Sparkle) with my husband and our four legged babies in front of a fire, a nice dinner, and a classic on Turner Classic Movies. 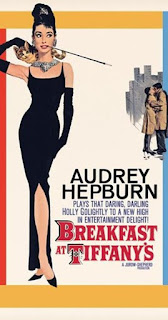 Today, as I write this, it is the former type of a day that we are experiencing. It is a beautiful crisp day. I feel like a moth emerging from a cocoon. I was felled earlier this week with the flu.
I am feeling better today than I have over the past three days. I am not completely out of the forest. I am experiencing a raspy voice today and the remnants of a cough and am hoping to be back to 'normal speed' by this time tomorrow.
But tonight, my plans are to sit back and enjoy one of my favorite films, Breakfast at Tiffany's.
This movie resonates with me on so many levels. First of all, it was released the year I was born, 1961.
That opening shot of Audrey Hepburn at Tiffany's puts a lump in my throat every time. I don't remember the very first time I saw it but I think I was around fifteen the first time I saw that shot and that was the New York that I dreamed of coming to. New York is just as much a character in this film as Holly Go Lightly, George Peppard , that iconic black dress, and Moon River. In the movie-making business, it’s highly 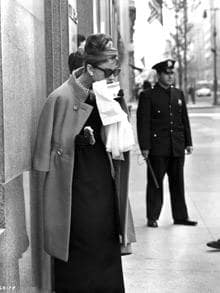 unusual that the first hour of the first day of shooting becomes the first scene of the film. But that’s how it happened on Breakfast at Tiffany’s.
Moon River happens to be one of my favorite songs. It was sung brilliantly at our wedding by our Best Man, Miles Phillips.
As a matter of fact, every time I hear it, I feel that my Grandmother Skipper is nearby!

I know that sounds crazy, but I do. We both loved that song.

Anyone who knows me very well knows that I've been saying that for the past 22 years since her passing on February 2nd of 1995.
How interesting that this film is playing tonight on the anniversary of her funeral. She was one of the few that I could actually talk to about my New York aspirations.
After I came to New York, I called her every five days just to check in and give her an update that I was OK. I did this up until the very end of her earthly existence. The last year of her life as she was in increasing failing health, I went home five times her last year. 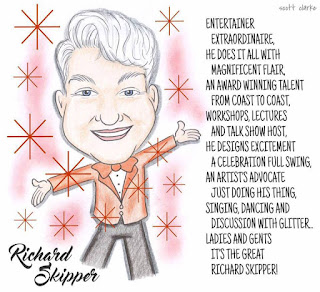 I'm also happy that she knew Danny (my husband).
I don't know if she ever grasped the extent of our relationship but she liked him and that meant a lot to me. When she passed, we were in the midst of a New York snow storm and I was unable to get home for her funeral.
I still check in with my Grandmother on a regular basis. She has never left me.
Years later, I was at a party at Celeste Holm. I find myself in a corner with Patricia Neal. I was able to tell her how much I loved her in this film and how much the film meant to me. She held my hand for almost the entire evening and even told me that I reminded her of a young George Peppard! 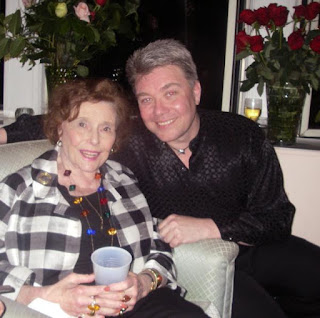 There are other things that happen in my life that also helps me to find rapture in these unsteady times. One of those is sharing in the music of those that are my friends in this business.
Today in the mail came Karen Mason's It's About Time, her latest CD. I am thrilled that I played a small part in this Go Fund Me Campaign. It truly is a great CD! I cannot wait for you to hear it! Congrats, Karen!
I am looking forward to sharing my show on the 12th for all that will be attending. In addition to Sidney Myer, Josephine Sanges, Cathy Szabo, and a very special Mystery Guest, I'm looking forward to making music with Rex Benincasa, Michael Lavine, and Saadi Zain. 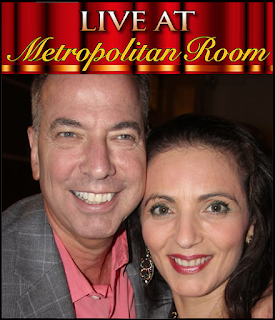 I have also been asked to sing in Bernie Furshpan's Birthday celebration on the 13th at The Metropolitan Room. I'm thrilled to be asked and to participate.
We have to hold on to the good. There is a LOT of unrest in the world today. I saw this post in my feed today and wanted to share it with you.
I am shocked, stunned, and appalled at the number of my Facebook friends, who are condoning the insane violence by protesters on the UC Berkeley campus, in response to an appearance by Milo Yiannoupolis. You/I/WE are all free to disagree with one another and criticize and challenge the arguments of our political foes. However, NONE OF US is given the authority to riot and assault people who dare to disagree with us.
I am not a particular fan of Milo's. I think he's silly, affected, Narcissistic, and self serving. He's far more of a clown than a serious intellectual. HOWEVER, I've heard, and seen enough of what he has to say to know that he does not venture into 'hate speech', but instead, deliberately, and humorously, trolls hyper- reactionary people, who never fail to be outraged at even the slightest provocation. It's a very deliberate MISCHARACTERIZATION of what he has said and done, in an attempt to rally people to condone violence and suppression of free speech.
If you are buying into this hyperbolic rhetoric of the Left, then you are being led right off a cliff. I am so sad to say (and see) this, but the Left is losing it's collective mind, and has moved bag and baggage into some parallel reality, where disliking someone's policies, means taking license to demonize, vilify, and brutally physically assault them and/or their supporters. Get a grip please.
Life is so much better when you stop caring about what everyone thinks, and start to actually live for 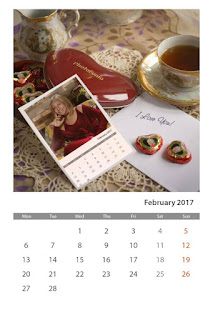 yourself!!
Sit back! A new news cycle is about to begin!

Today, I celebrate John Conrad Schuck (Happy Birthday, John!). Here is my interview with John regarding playing opposite Madeline Kahn in Hello, Dolly!


If you have any questions/comments/suggestions for the site, please share with me 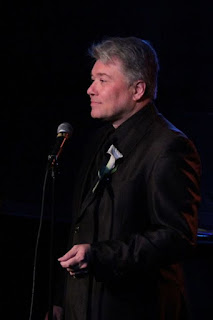 8 Days Till ShowTime! February 12th, 2017
Russ Woolley and Wright Bros. Real Estate, Nyack, NY proudly present Richard Skipper Celebrates...His Birthday...And He'll Sing If He'll Want To! He will be joined by Sidney Myer, Josephine Sanges, Cathy Szabo, and a very special Well Known Mystery Guest...star of stage, screen, and television!
All under the musical Direction of Michael Lavine with Rex Benincasa on percussion and Saadi Zain on bass. This is a 1PM Bottomless BrUNCH SHOW**! (90 minutes) At The Laurie Beechman Theater(http://www.westbankcafe.com/) Reservations a Must! Please Reserve Today
RIchard Skipper Celebrates is a 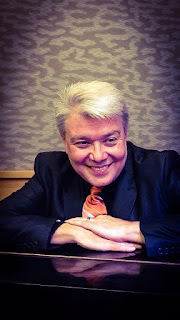 tour-de-force cabaret show -- top names in musical entertainment, meet to talk and perform -- songs, stories and recollections of lifetimes and moments in show business.    $30 Cover and $20 Minimum per person https://web.ovationtix.com/trs/pr/968230

Additional Details to Come!
*Previous Mystery Guests have included Hilary Kole, Melba Moore, Stacy Sullivan, and Jana Robbins
You Never Know Who You Might See There and what might happen!
Keeping America great through Art!
**For an additional $20.00 unlimited Bloody Marys and Mimosas!
Click HERE TO SEE PROMO


Posted by RichardSkipper at 5:17 PM No comments:

Email ThisBlogThis!Share to TwitterShare to FacebookShare to Pinterest
Labels: 1961, Black History Month, husband, Karen Mason's latest CD! It's About Time, month of hearts and flowers, New York, released the year I was born, unusual that the first hour of the first day of shooting
Newer Posts Older Posts Home
Subscribe to: Posts (Atom)