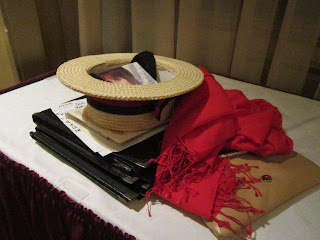 "Life holds so much-so much to be so happy about always. Most people ask for happiness on condition. Happiness can be felt only if you don't set conditions." ~Arthur Rubinstein

I hope that you are off to a great week on this January full moon, Take the time to do something nice for your friends and relatives today.
I did last night. I brought a lot of friends, both personal and Facebook, to Lucie Arnaz's closing night at  Feinstein's. Wow, What a night! One of those magic nights where the planets aligned to create a magical night that will never be repeated. One thing is certain, you will not experience these nights from the comfort of your home!
I had over 25 people show up last night as a result of my blog, Facebook postings, and phone calls and emails. I understand that Lucie's entire run was packed like last night! That is social media at its best.

Celebrating her Latin Roots, Lucie was at the top of her game tonight. If only we could bottle her talent! This is the real deal in a PACKED star studded audience that included Marlo Thomas, Marilyn Maye, Charles Strouse, Jana Robbins, Walter Willison, Deb Berman, Dana Lorge, Bobbie Horowitz, Laurence Luckinbill, Shawn Moninger,David Friedman, Colin Lively, Douglas Denoff,  and Carolyn Quinn! Thank you Lucie and Ron Abel for an INCREDIBLE NIGHT!

I'm blaming it all on the Bosa Nova!

Kudos to one of the best staffs in any room in Manhattan. From the moment, I walk into that room, the gorgeous hostess, Jessica Poli, Feinstein's Manager, welcomes you as if she were inviting you into her living room. John Iachetti, Director of Entertainment, Feinstein's NY Loews Regency certainly knows how to run a room!

Lucie Arnaz's "Latin Roots" WOW,  WOW,  WOW! What a show. Lucie's father, Desi, and mother, Lucy,  were beaming with pride from above, for that I am certain.  Lucie, a show girl  extraordinaire, combined with Ron Abel' s musical direction created a fiery show that made the FEINSTEIN's NY room sizzle with excitement.
They not only had the crowd on it's feet, they had everyone feel as if they were at a party, not at a show. Ellen Easton, RED WAGON PRESS
As my friend, Colin Lively posted on Facebook, "Loved every moment. What a show !! Delicious on the ear and delectable on the eye.All I can say is WOW! She is clearly a product of the most famous couple since Adam and Eve. The looks .. the talent ... And her mother's legs!"
Of course, I am talking about Lucie Arnaz's closing night at Feinstein's. It was an incredible night on every level.
And there are many elements that come together to make these evenings happen. As far as Lucie is concerned, it starts in the genes. What a lineage she has!
FEINSTEIN’S AT LOEWS REGENCY opened its Winter 2012 season with the return of Lucie's show based on her new CD “Latin Roots.”
Lucie's show last night was based upon her latest CD, Latin Roots, celebrating the music of her father, Desi Arnaz.
From the moment that she walks into the room, the audience is permanently and forever in the palms of her hands.
She is looking gorgeous and chic in a beautiful off the shoulder coral dress looking more ravishing than is humanly possible in one person. One thing that she definitely inherited from her mother are a great pair of legs!
Lucie is funny, poignant, moving, and an incredible power house voice. I know there may be odd comparisons, but I would LOVE to see Lucie as Mame. Jerry Herman, I hope you see and consider this!
The show was a little late starting, I heard a rumor that two of the musicians were a little late getting there. It didn't matter. It was well worth the wait. There were a couple of glitches at the top of the show which proved that Lucie developed impeccable comedic timing from that other "Lucy". During her opening song, there was "ethereal" violin music strangely coming through the sound system.
She alluded to the fact that it could possibly be coming from her dad!
There was another very funny moment when her drummer anticipated a rim shot and came in too soon. How she dealt with it was hysterical.

Saw Lucie Arnaz at Fienstein's last night. She was absolutely spectacular! Ron Abel's arrangements were fantastic, and Lucie not only sounded fabulous, she also moved beautifully, and she was funny, and warm, and sexy. I truly can't say enough. Bravo Lucie.  Jana Robbins

With tables pushed right up to the stage last Thursday at Feinstein's you were a hit before you got on stage! Thanks for directing me to "where" my line came in during the 2 songs. I'm still hearing your songs in my head when I'm trying to sleep! I hope to see your 'Babalu' show someday too. Michael Broad 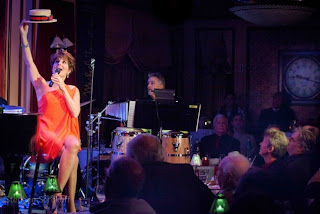 Lucie Arnaz rocked the room at Feinstein's last night in an exhilarating performance that was a tribute to her father's career in music. It is my hope that she will also do what she mentioned she might: put together a second show in a tribute to her mother. Lucie Arnaz is truly a performer not to be missed; if you ever have the chance to see her live, by all means do so! Carolyn Quinn

"I have thought that everything I've seen her do is amazing and this was even better than all of the rest. Yea!" Shawn Moninger

Last night was the second night I saw Lucie Arnaz’s show at Feinstein’s and I saw the wonderful show, Babalu, that she put on with Desi Jr. and a band at the 92nd Street Y. I’ve LOVED each performance I saw. I didn’t think things could get better after Friday night’s performance at Feinstein’s and last nights performance proved me wrong. It was even more uplifting! Ron Able’s able arrangements were knock outs!  It was as good, if not more entertaining than the performances of the “Greats” that I’ve seen in my life.  She actually affected me at least as much as my former favorites, Jerry Lee Lewis, Elvis Presley, Peggy Lee, The Kingston Trio, Judy Garland and Tony Bennett. I loved every minute of last night’s show. If I’ve used many exclamation points, please forgive me. There aren’t word to describe the energy I got from this show. I hope this show travels far and wide. It will bring such joy to people!”
Bobbie Horowitz "I think Lucie is the ultimate professional performer. Even though I've heard her sing these very same songs a million times, every time is like the first—you can't help but feel the love she has for her father...very special." —Glen Charlow

"Lucie Arnaz 'Latin Roots' show is pure entertainment. A beautiful tribute to her genius dad that will move your feet, your fingers and ultimately your heart." Jim Brochu

MY Blog on Lucie

Lucie Arnaz Goes Back to Her Roots

THANK YOU , LUCIE, FOR THE GIFTS YOU GIVE TO THE WORLD! 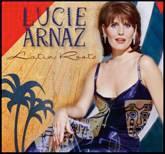 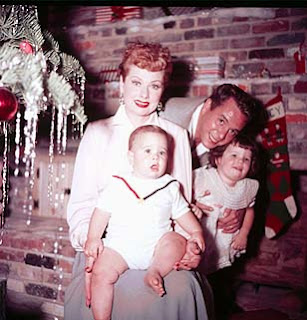