The Paley Center Screening of Carol Channing: Larger Than Life! 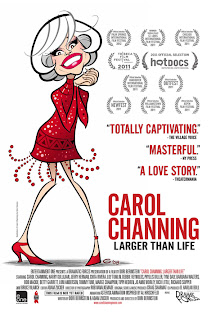 I hope this finds you well. This is my last full day in Los Angeles...and what a busy day it's going to be. Last night was an incredible night. The Paley Center here in LA had a special screening of Carol Channing: Larger Than Life. It was STAR studded evening. These are TRUE stars, those that have earned the right to be called STAR.We were joined last night by Dan Glosser and what an inspiring night it was!

This has been an incredible journey. From the moment that Harlan Boll, who is also co-producer of this film, told me that a documentary was in the works and they would like me to be interviewed for this film to Dori Berenstein who co-produced, directed, and wrote this film interviewing me in February of 2010.


Filming me at St. Luke's in New York,  on July 27th, 2010. Being with Carol and Harry in October last year when Carol received her star on the Palm Springs Walk of Fame. The Tribeca Film Festival twice last year. The opening, in which Carol and Harry not being able to attend. The following week when they were able to attend and I was able to join them and watch it with them.
Seeing it on Saturday at The Palm Springs Film Festival...and then last night! I cannot thank Harlan and Dori enough for this incredible opportunity which I will always cherish. As I move on to explore other areas and put my career performing as Carol Channing behind me, last night was the perfect topping on the cake.
Thank you, Rene Reyes, director of public programs and festivals, for contacting me and asking me to be part of last night. Rene and I met two years ago when we honored Mitzi Gaynor at the Bistro Awards and we have remained in touch.
Last night, it was great to see Lily Tomlin, who moderated the evening, Joanne Worley, who was Carol's standby in Hello, Dolly! (Joanne and Lily also appeared many times with Carol when she appeared on Laugh In), Carole Cook, who was the SECOND woman to play Dolly in the Australian company of Hello, Dolly! They all appeared after the film in a lively discussion of all things Carol.They were joined by Dori Berenstein and Bruce Vilanch. After the film last night, there was a reception and it was great to meet Julie Newmar who I found to be one of the nicest unpretentious people I have ever met in this business. She was fixated on me and wanted to talk about me and my career and life when I just wanted to say hello and how much I've admired her work.

I also met Rose Marie last night who is as spunky and as lively as ever. It was great to meet George Chakiris and Dee Wallace who I have written about in previous blogs. Tippi Hedren looking SMASHING, she is also in the documentary. And Ruta Lee who always greets me as if I were her best friend.These people are stars because they are always giving and want to give to the world. It is not about "Me! Me!! Me!!" We still watch them on TV and love them because they have a body of WORTH and are not like the so called reality stars of today. I am lucky to bask in their light. I will continue to celebrate and honor these people that deserve to be celebrated! Thank you ALL for the gifts you give to the world! It was also great to see Katherine Kramer last night. Her and her mom BOTH looking like 2 million dollars!
NO COPY WRITE INFRINGEMENT INTENDED.  FOR ENTERTAINMENT PURPOSES ONLY!


Please do what YOU can to be more aware that words and actions DO HURT...but they can also heal and help!
Follow me on Twitter If you've seen one of my appearances/shows, add your thoughts to my guestbook at www.RichardSkipper.com


Tomorrow's's blog will be... YOU TELL ME! I'M OPEN TO SUGGESTIONS!


This Blog is dedicated to Harlan Boll! Thanks for ALL you do!
Posted by RichardSkipper at 12:29 PM