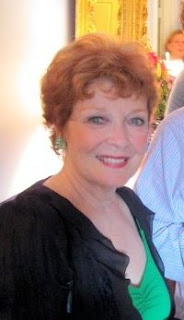 "Our life is what our thoughts make it." ~Marcus Aurelius


Happy Tuesday!
I hope this finds you well. Today marks the end of the first part of my itinerary. Palm Springs has been incredibly rewarding. I am ending my stay today with lunch with my friend Pat Barr and Joyce Bulifant!
Then it's on to Hollywood. Tonight, we're seeing Cortes Alexander. Can't wait! We will be in Hollywood till Friday and then it's off to Denver for a few days and then back to New York to catch one of my favorite actresses make her cabaret debut at Birdland! Please feel free to join us if you'd like to. More details later in this blog about that.
I have been a fan of Anita's for as long as I can remember. I had the cast album of Mr. President and used to listen to her all the time. And her bubbly personality would and still does light up every tv show or movie in which she appeared. I watched her on game shows in the hey day of  game shows.
Gillette was born Anita Luebben in Baltimore, Maryland, the daughter of Juanita and John Alfred Luebben.
Raised in suburban Rossville, she graduated from Kenwood High School. Gillette studied at the Peabody Conservatory and made her Broadway debut in Gypsy in 1959.
Additional Broadway credits include Carnival!,All American, Mr. President, Kelly, Jimmy, Guys and Dolls, Don't Drink The Water, Cabaret, They're Playing Our Song, Brighton Beach Memoirs, and Chapter Two, for which she was nominated for the Tony for Best Actress in a Play.
She received the 1960 Theatre World Award for her performance in Russell Patterson's Sketchbook. 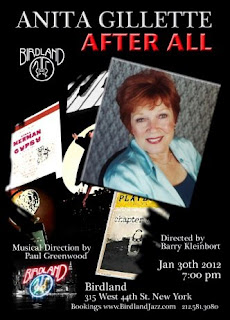 I came to New York in 1979. I went to the taping of The Jack Gifford Show in 1980. Anita Gillette was the guest star! She sang My Coloring Book, one of my favorite songs, and I remember it as if it were yesterday! She is currently filming a movie with Ed Burns AND rehearsing for her show on the 30th, so I am thrilled that she made room for this blog interview! Ladies and gentleman, today I celebrate Anita Gillette!

The first PROFESSIONAL show Anita saw was in New York in the year of her graduation from High School, 1954, when the choir came to NY for a bus trip and they went to see ON YOUR TOES with Bobby Van and Elaine Stritch.  Anita was absolutely stunned.  And she didn't even want to be a dancer!  SLAUGHTER ON 10TH AVENUE and GLAD TO BE UNHAPPY!  She remembesr even what she wore.  A HAT with a feather straight across her brow.  And a dress with a Roman Shade hem!  They were staying at the Tate and asked a cab to take them to LINDY'S  which was just around the corner!  Trying to smoke cigarettes in the hotel room.  She says she never felt so naughty in her whole life!
The only arts she was exposed to were on the radio.  All of the Saturday morning shows like LET'S PRETEND and GRAND CENTRAL STATION, etc., were her dramas.  And she loved those shows when she was a kid.  Then, she started singing around Baltimore, and started going to the symphony at the Lyric Theatre and to the Hippodrome for amateur night.  She was hooked from a young kid.
Anita's first time on stage, officially, was when she did the show THE BARTERED BRIDE by Smetana in High School and she sang a song about a brown bear.  She got rave reviews.
She was paid to sing at weddings and funerals, etc., etc., and for club events -- she's not talking bridge clubs, but clubs like the VFW where she sang for Bull Roasts, Pig Roasts, Oyster Roasts, you name it!
What makes Anita cry out of the blue when she sees or hear it?
AND I WAS BEAUTIFUL from Dear World

Carol Channing is a NATIONAL TREASURE and I am SHOCKED that she is not already one of the honorees at the Kennedy Center.  They should be ashamed of themselves.

Next appearance
I will be doing my show AFTERALL at Birdland on January 30th -- MY CABARET DEBUT!  I can't believe it, but this is a first.  And and at the same time  I'm shooting an Ed Burns movie, A Fitzgerald Christmas, and in March I open in THE BIG MEAL, directed by Sam Gold, for Playwrights Horizons.


What was your lowest low and how did you surpass that?


My lowest low was being UNEMPLOYED, OUT OF WORK, NADA, NOTHING, FLAT DOWN in Los Angeles after a failed series, BOB and CAROL and TED and ALICE
What one change would you like to see in today’s industry?

I don't know what could change in the industry because it's all tempered with what's going on in the world, like technology, like people judging talent by IMDB lists and dates of birthdays, etc., etc. Nothing is the same, but they say that's progress and maybe it is, but I would certainly like the to see them remove birthdays so people might be judged on their accomplishments rather than their age. 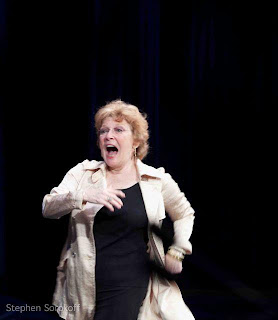 I am a very happy person because I am still in the game and I have a beautiful family -- which some people don't -- to back me up, so what's not the be happy about?
Do you feel you have achieved what you set out to do?
I don't think I actually set out to do anything, and it all happened anyway.
What do you do to remain positive when life's hiccups get you down?
Laughter is the best medicine.  My old aunt -- (must be done with a Baltimore accent)  said when I visited her in the nursing home, "Oh, Nita, they say I'm gonna die.  I can't die---I'd go crazy if I died."
How on earth do you reach theatregoers now that newspapers are obsolete and there are so many channels on TV you can’t pick the right ones to advertise on and with the web being so hit and miss.
Technology, provided by friends who are hip on the subject, thank God

A genie pops out of the lamp, he grants you three wishes. What are those wishes?
I would certainly wish they would find a cure for #1 diabetes, the kind that affects kids, because I have a very talented nephew who suffers from it.  That's not the only disease affecting kids that I wish they would find a cure for.  I wish also that the world finds a way to get along and stop killing each other.  And I wish that we find a new place in the universe with life.
If you could travel anywhere in the world and spend some time there, where would you choose, and what would you do?I really think I would like to do space travel.
What would you ask God if you could right now?
I would ask God to listen to my grandchildren's pleas, rather than mine.  I've gotten so much from life so far, I believe it's their turn.
What is the last stage show you saw.  Local or professional.  18The last stage show I saw was SEMINAR -- with Alan Rickman, directed by the director I will be working with in a few weeks, Sam Gold, and I enjoyed it enormously.
What was the turning point in your career?
Certainly, having Merrick say to the world I was a star, back in 1961.  And learning to ACT from Michale Allinson when we did a summer stock tour of MY FAIR LADY

Thank you, Anita, for the gifts you give to the world! 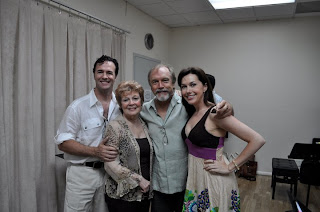 Tomorrow's blog will be...YOU TELL ME!  I'M OPEN TO SUGGESTIONS!


Thank you, to all the mentioned in this blog!
Here's to an INCREDIBLE day for ALL...with NO challenges! 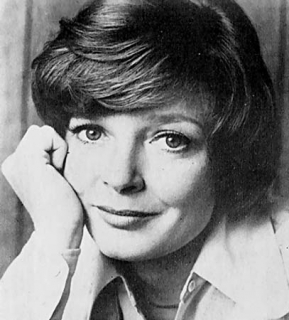