Reality leaves a lot to the imagination.
-John Lennon

Happy Saturday, April 15th, 2017!
April 15 is the 105th day of the year. There are 260 days remaining until the end of the year.
It is a gorgeous day here in New York. It is the kind of April day we sometimes get in New York; crystal blue skies. a few wispy white clouds, 72 and sunny.
This is a sad day in our nation's history.
President Abraham Lincoln, the 16th president of the United States, dies from an assassin’s bullet. Shot by John Wilkes Booth at Ford’s Theater in Washington the night before, Lincoln lived for nine hours before succumbing to the severe
head wound he sustained.

As I begin my blog today, I'm listening to Tyne Daly singing Some People from 1990's Gypsy. I saw that show six times with her. WOW! Still resonates as one of the best performances I saw on Broadway!
On this date in 1964, the first Ford Mustang rolls off the show room floor, two days before it is set to go on sale nationwide.

You have three days left to file with the IRS.
Once again, I'm surrounded by music on this Easter weekend. Later today, I'm looking forward to seeing Deborah Stone at Don't Tell Mama and then breaking bread with wonderful friends visiting here from out of town.
Tomorrow, I'm cooking for 12! Looking forward to the week ahead. Great events this week. Will tell you more in upcoming blogs.  It feels good.
Here are a few of my recommended shows. Please go out and support these artists. They are truly working to make the world a better place. We ALL have to support each other.
Being an artist means believing you are an artist; making a living as an artist means mastering many of the skills and professional attitudes shared by successful self-employed persons engaged in other occupations. The artists mentioned in this blog are a stunningly accomplished bunch. Never one to let the green grass grow under their feet, they are all out there creating great art.

Looking for something to do tonight?
Go see The Cyndi Hazell Duo Featuring Rick Laban on Guitar Vocals...We have been performing together for about a year, playing songs from the 60's to today with various genres of music from Carol King/James Taylor (we also do a tribute show to them) to Diana Ross, Aretha, etc. to Natalie Imbruglila.

There is also Hilary Kole! 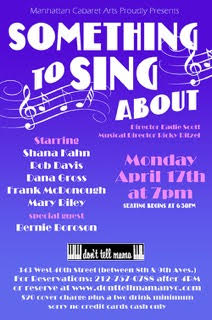 Nice write up in Between My Stage Life with Anna Lively. Please read and if you live in the tri state area you don't want to miss her show at Feinstein's/54 Below in New York this Wednesday April 19th at 9;30 singing the tunes of Doris Day.

SUNDAY, APRIL 23rd at 4:30At some point in life, everyone needs to let go of something and that is what Marcia Roney is doing in her new solo show. LETTING GO!
Although she may be new to some of you, she is not new to cabaret.

She did her first solo show at the Metropolitan Room and has performed in many group shows at the Laurie Beechman,Theater, The Duplex, Don't Tell Mama and Rose's Turn.

She is delighted to be working with multi- award-winning director Peter Napolitano and acclaimed musical director Mathew Martin Ward . She extends a special invitation to all MAC (Manhattan Association of Cabarets and Clubs) members to join her as she explores things she has already let go of, still need to let go of and the fear of future things she may have to let go of even though they may or may not happen. She is a good story teller and has lots of stories to tell!
DON'T TELL MAMA CABARET:343 West 46th Street, NYC Reservations:  212-757-0788 (after 4 PM) www.donttellmamanyc.com
$15 cover charge/MAC $10/ 2 drink minimum CASH ONLY. 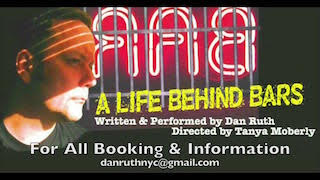 Dan Ruth, is performing his spectacular show, A Life Behind Bars, at my cabaret home, the Laurie Beechman Theatre in April and May.
He has already received two extremely favorable reviews for this gritty, funny, rollercoaster real life tale of addiction, gentrification (YES THAT’S RIGHT!), sobriety and survival. Directed by Tanya Soberly. Read the reviews here, and please come out to support Dan Ruth:

This is a funny, wet-your-pants show, with an outstanding performer and a comical but powerful message. - Steve Nardoni, Theater Pizzazz

His quicksilver changes of character, mood and setting warrant comparison to the great
Lily Tomlin, and that is praise I do not give lightly. - Gerry Geddes, BistroAwards

Remaining shows are: Tuesdays April 25th and May 9th at 7PM and Wednesday, May 17th at 9:30PM.
To purchase tickets, please visit: https://web.ovationtix.com/trs/pr/968687 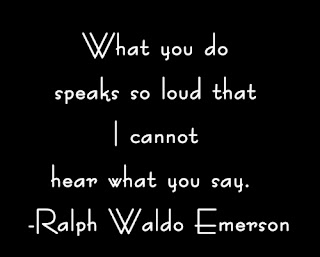 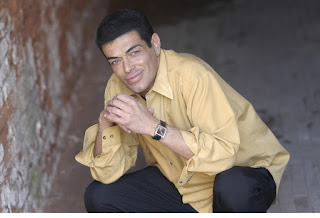 May 1 at 9:30pm, Lisa Jason:
Rock Singer/Songwriter Joins Forces With Broadway Stars, in her New Show, "Another Hundred People" at Feinstein's/54 Below.

APSS Members: no charge.  Guests: $15.
However, if you join at this meeting, this fee will be credited to your membership for next season!
Visit: APSSinc.org for more info and to read monthly newsletter and those from their thirty year plus year history!

The road from love to hate is easy. The one from hate to love is more difficult, but brings peace.
-Pope Francis


Excitement continues to mount on The Great White Way as Hello, Dolly! opens at the Shubert 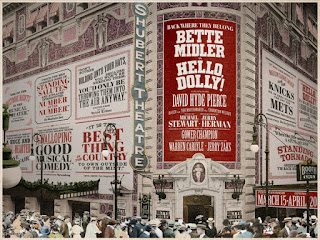 Theater. This revival of the beloved musical stars none other than Bette Midler. The book is by Michael Stewart with music and lyrics by Jerry Herman. It is directed by four-time Tony Award winner Jerry Zaks with choreography by Warren Carlyle. The show is the first new production of Hello, Dolly! to appear on Broadway since it opened more than fifty years ago.

It pays tribute to the original work of legendary director/choreographer, Gower Champion, a staging that has long been considered one of the greatest in musical theater history. The Schubert Theater is located at 225 West 44th Street. Visit: http://hellodollyonbroadway.com.


Posted by RichardSkipper at 2:17 PM