-- "You'd find it easier to be bad than good if you had red hair," said Anne reproachfully. "People who haven't red hair don't know what trouble is."
(by character Anne Shirley speaking to her guardian Marilla in book 'Anne of Green Gables')

If you've followed my blogs over the past week, you know that I've been celebrating the birthdays of some famous Leos: Lucille Ball, Rhonda Fleming, Arlene Dahl, Esther Williams, Rose Marie, and Bert Lahr.

The first three, of course, are redheads. Several people speculated that I was doing a series on famous redheads. My friend Bart Greenberg suggested I give equal time to two famous male redheads, Danny Kaye and Red Skelton! As I pondered the idea, I thought it would be fun to show the connections they both have to Lucille Ball. I don't think there is any better subject for a blog than to show three masters at work. 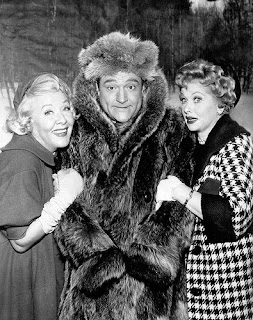 Both Danny Kaye and Red Skelton, like Lucille Ball (all comedians WITHOUT BEING VULGAR OR INSULTING) had highly successful TV shows and ALL on CBS. 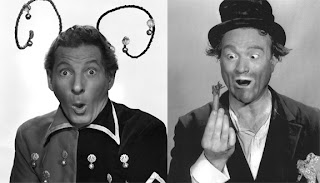 From the early 1950s through the early 1970s, The Red Skelton Show was an American variety show that was a television staple. It certainly was regular television viewing in our household. It was second to Gunsmoke (1955–1975) and third to The Ed Sullivan Show (1948–1971) in the ratings during that time.
Skelton, who had previously been a radio star, had appeared in several motion pictures as well. 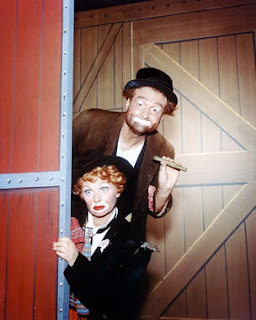 Although his television series is largely associated with CBS, where it appeared for more than fifteen years, it actually began and ended on NBC. During its run, the program received three Emmy Awards, for Skelton as best comedian and the program as best comedy show during its initial season, and an award for comedy writing in 1960.

Red Skelton's network television program began at the start of the 1951 fall season on NBC (for sponsor Procter & Gamble).
The MGM agreement with Skelton for television performances did not allow him to go on the air before September 30, 1951. 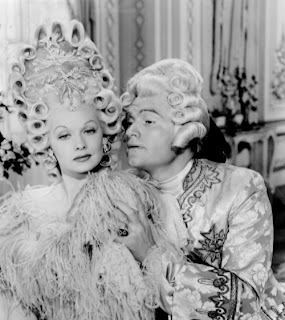 After two seasons on Sunday nights, the program was picked up by CBS in the fall of 1953 and moved to Tuesday night, the time slot with which it would become primarily associated during most of its run. 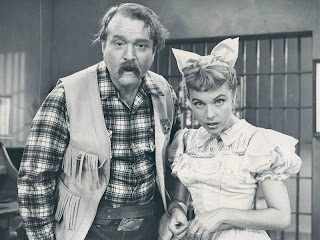 After his first CBS season the program was moved to Wednesday night and expanded to an hour for the summer of 1954 only; it was then reduced back to a half hour for a time, later expanded again, returning to Tuesday night, where it would remain for the next sixteen years (co-sponsored by Johnson's Wax and Pet Milk between 1955 and 1962).

The program was produced at Desilu Productions and CBS Television City in Hollywood, and over five years, from 1955 through 1960, was telecast in color approximately 100 times.
In 1960, he purchased the Chaplin studios, with plans to continue using the facility for his television show and for making films.
It was the most colorcast of the few programs CBS aired in color during this period. 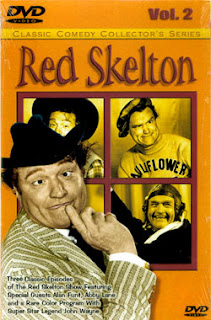 By 1960, CBS no longer manufactured television sets (unlike its rival NBC's parent company, RCA) and pulled the plug on colorcasts. With the exception of a few specials and some yearly broadcasts of "The Wizard of Oz," CBS would not colorcast again on a regular basis until the 1965-66 fall season when the network could no longer avoid public demand and rising sales in color television sets. 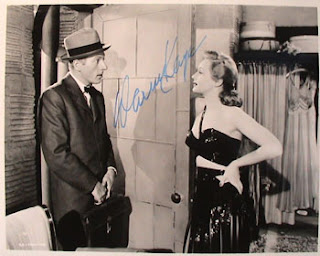 The Danny Kaye Show was an American variety show hosted by Danny Kaye that aired on CBS from 1963 to 1967 on Wednesday nights. Again, this was a regular in our home. Directed by Robert Scheerer, the show premiered in black-and-white, but later switched to color broadcasts. At the time, Kaye was at the height of his popularity, having starred in a string of successful films in the 1940s and '50's, made successful personal appearances at such venues as the London Palladium, and appeared many times on television.
His most recent films had been considered disappointing, but the television specials he starred in were triumphant, leading to this series. Prior to his television and film career, Kaye had made a name for himself with his own radio show, and numerous other guest appearances on other shows.


Here are Danny Kaye and Lucille Ball once again. This time from a television special in 1961, the year I was born. 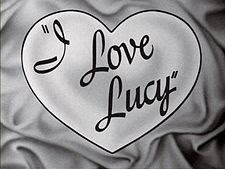 Lucille Ball had three successful series om CBS from the 50s till the mid 70s starting with I LOVE LUCY.I Love Lucy starred Lucille Ball, Desi Arnaz, Vivian Vance, and William Frawley. The black-and-white series originally ran from October 15, 1951, to May 6, 1957, on the Columbia Broadcasting System (CBS). When the original series ended, the show continued for three more seasons with 13 one-hour specials, running from 1957 to 1960, known first as The Lucille Ball-Desi Arnaz Show and later in reruns as The Lucy-Desi Comedy Hour. 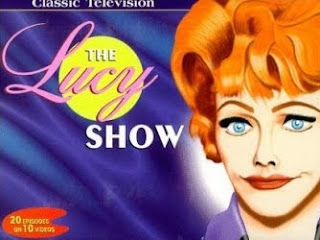 The Lucy Show aired on CBS from 1962 until 1968. It was Lucille Ball's follow-up to I Love Lucy. A significant change in cast and premise for the 1965-66 season divides the program into two distinct eras; aside from Ball, only Gale Gordon, who joined the program for its second season, remained. For the first three seasons, Vivian Vance was the costar. The earliest scripts were entitled The Lucille Ball Show, but all episodes aired with the title The Lucy Show.Ball won two Emmy Awards as Outstanding Lead Actress in a Comedy Series for this show, for the years 1966-67 and 1967-68.
In 1962, two years after Lucille Ball and Desi Arnaz divorced and their final show aired (using the I Love Lucy format), Desilu Studios was struggling. Both The Ann Sothern Show and Pete and Gladys starring Harry Morgan and Cara Williams had been canceled. The red-headed Williams, in fact, had been promoted as the next Lucille Ball. So that left Desilu with only one hit series in the spring of 1962—The Untouchables. Arnaz, as President of Desilu Studios, offered Ball an opportunity to return to television in a weekly sitcom. At that time, CBS executives were somewhat dubious as to whether Ball could not only carry a show without Arnaz, but also follow such a landmark series as I Love Lucy. According to Geoffrey Mark Fidelman (author of The Lucy Book - Renaissance Books), it was "never intended for this program to go beyond a single season." Fidelman also writes in his book that this arrangement was "meant to be a stop-gap measure for the beleaguered studio" and that through the sale of this series, Desilu was able to "force the CBS network to invest in and air other upcoming Desilu products." It would be a strategy that Ball herself would use in the future, where instead of CBS renewing Lucy for another year, Ball would have the final say as to whether she wanted to continue her series. Nevertheless, under Arnaz's encouragement and persuasion, Ball agreed to do the show provided it be shown on Monday nights (the night on which I Love Lucy had aired), and that she would be reunited with Vivian Vance and her writers from I Love Lucy. CBS agreed to a full season of episodes and The Lucy Show premiered on Monday night, October 1, 1962, at 8:30 P.M.The show began with Lucille Ball as Lucy Carmichael, a widow with two children, Chris (Candy Moore), and Jerry (Jimmy Garrett), living in Danfield, New York, sharing her home with divorced friend Vivian Bagley (Vance) and her son, Sherman (Ralph Hart). In order to get Vance to commit to the series, Arnaz acquiesced to her demands for an increase in salary; co-star billing with Ball; a more attractive wardrobe; and, finally, that her character's name be called Vivian. After doing I Love Lucy, she was still being called Ethel by people on the street, much to her unhappiness.
Even though the book which the show was based on (Irene Kampen's Life Without George) centered on a divorcee with children, it was decided early on that the Lucy Carmichael character should instead be a widow, since that was thought to be more acceptable to viewers, especially in those more innocent TV days, where single parents were always widowed. Though a number of TV historians have through the years cited One Day at a Time’s Ann Romano (Bonnie Franklin) as television's first regular running character who was a divorcée, that accomplishment actually belongs to The Lucy Show’s Vivian Bagley. In the show's original format, Lucy had been left with a substantial trust fund by her late husband, which was managed during the first season by local banker Mr. Barnsdahl (Charles Lane). Comedian Dick Martin, working solo from his long-time partner Dan Rowan, was cast in ten episodes as Lucy's next-door neighbor, Harry Connors, during the show's first season. Character actor Don Briggs was also featured in six episodes as Viv's beau, Eddie Collins. The first season of The Lucy Show fully utilized the talents of Bob Carroll, Jr., Madelyn Martin, Bob Schiller, and Bob Weiskopf (the original writers of I Love Lucy) in creating the first season's classic 30 episodes, and it also featured Desi Arnaz as executive producer for fifteen of the first season's thirty shows.
At the end of its first season, The Lucy Show did receive rave reviews from the critics and ranked # 5 in the Nielsen ratings. Ball was nominated for an Emmy Award as Best Actress In A Series, but lost to Shirley Booth for the NBC comedy hit Hazel. Bolstered by great ratings, the series was renewed for a second year. 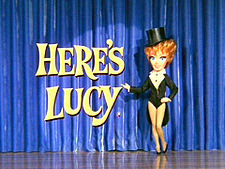 Here's Lucy is Lucille Ball's third network television sitcom. It ran on CBS from 1968 to 1974.

This clip (below) is from BroadwayBlogspot.com. I was interviewed by Kimberly Faye Greenberg (who I have written about in previous blogs), editing by Steven Michael Zack with an assist from Ernie Fimbres
BroadwayBlogspot webmaster


Thank you, Lucille Ball, Danny Kaye and Red Skelton! I love you and I know that somewhere right now someone is watching you entertain as you did in your heyday!

Thank you Bart Greenberg for your suggestion for this blog! Thank you, Glen Charlow, for supplying some of the images for this blog.

Tomorrow's blog will be a celebration of THE WIZARD OF OZ as we celebrate the 72nd anniversary of it's Hollywood premier.

And help us get Carol Channing the 2011 Kennedy Center Honor!
Contact me for details!