WE ALL LOVE LUCY! 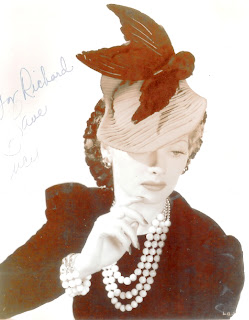 "I'm not funny. What I am is brave."
-Lucille Ball

I'm declaring this a national holiday! Lucille Ball IS 100 today. I'm putting her birthday in the present tense because she never left us. At 50, Lucille Ball has ALWAYS been a part of my life. And I have NEVER met anyone who said they did not love Lucy. When I was a kid, as I've written before, Lucy was very much a part of my life. 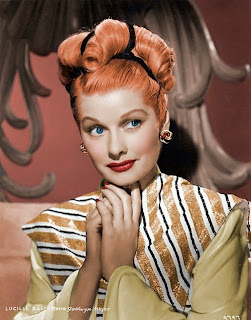 There were the reruns of I LOVE LUCY. 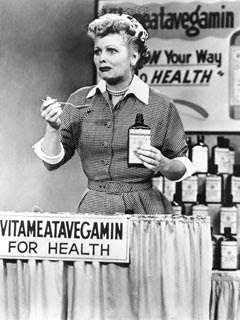 Let's celebrate Lucille Ball today by looking at back on an incredible career and legacy. 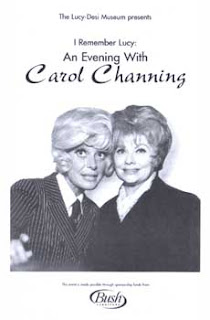 Then there was THE LUCY SHOW and HERE'S LUCY and LIFE WITH LUCY. I actually watched these shows when they first ran. I remember being in a hotel room in Massachusetts when Life With Lucy aired its first episode. I was so excited that Lucy was back on television.
Sure the episode was not at the level that previous series' had been, but it didn't matter, LUCY WAS BACK ON TV! 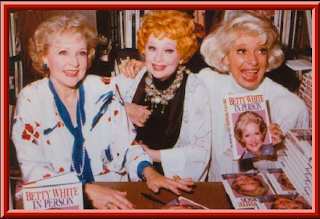 Can you imagine our lives if Lucy had never existed? I certainly can't. She is as much a part of our cultural landscape as Mount Rushmore. She had that drive to succeed and entertain. And she is STILL funny and transcends all generations. 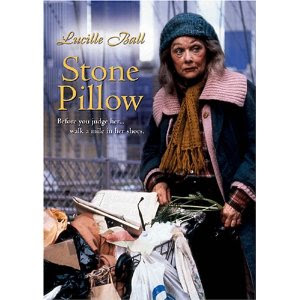 When Lucy did Stone Pillow, so many people were so cruel to her. My heart went out to Lucy.The cultural landscape had shifted.
People that were now reviewing were a little bit crueler than past generations of real critics would have been. I remember seeing interviews where Lucy defended her doing that movie. She admitted how cruel people had been to her. She stated that she just wanted to work. 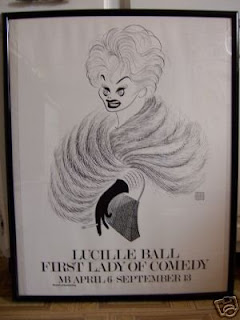 In 1984, The Museum of Television and Radio did a retrospective of her work and she did a master class afterwords.
I regret to this day not getting there. I think it was her last appearance in NYC. Here is one of our favorite Lucy moments: the legendary Vitameatavegamin scene from 1952′s “Lucy Does a TV Commercial.” 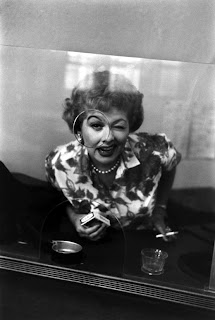 Life has released a series of never-before-published photos of Lucy. Check this out!The above photo is captioned: In 1958, on the set of The Lucy-Desi Comedy Hour -- a collection of occasional lavish specials that followed the adventures of the Ricardos and the Mertzes after I Love Lucy -- Ball does a comedy bit as a wisecracking clerk. As in real life, the fictional Lucy seemed to have tried every job in the want ads in the hope of eventually becoming famous and successful. Watching her fail spectacularly every week (even as the actress who played her showed off her unparalleled comic skills) made Lucy Ricardo a success -- 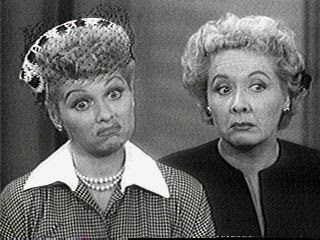 at becoming one of TV's most unforgettable characters.

This episode introduced me to Carol Channing and changed my life!To watch Lucille Ball perform was to love her -- her big gorgeous eyes and her hysterical over-the-top comedic antics. I'm still a big fan and always will be.
Lucille Ball was a trailblazer in the world of television and comedy, treading a path for generations of women in the entertainment industry to follow.
And why else do we love her? Well, Ball was a bit of a rebel spirit and a pioneer in her day, eloping with Cuban-born Desi Arnaz in 1940, becoming the first woman to run a major Hollywood studio (Desilu), being one of the first actresses allowed to show her pregnancy on TV, having her first child at almost 40 years old, and later going through a very public Hollywood divorce from Arnaz. 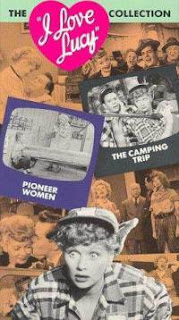 She was even registered as a Communist! 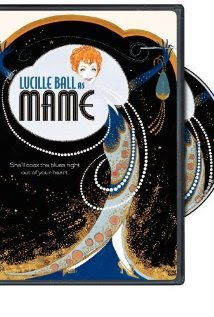 Mame is a 1974 musical film based on the 1966 Broadway musical of the same name, directed by Gene Saks, written by Paul Zindel, and starring Lucille Ball and Beatrice Arthur. I know it is fashionable to knock this film but there are actually moments in it that I really like.
Warner Bros. heads were concerned that Angela Lansbury, who had originated the title role on Broadway, had not yet captured the attention of the general public since she was mainly a Broadway star at this point (although she had starred in Disney's live-action/animated musical Bedknobs and Broomsticks in 1971). Her popular television series Murder, She Wrote, which would make Angela Lansbury a household name, would not debut for another ten years. 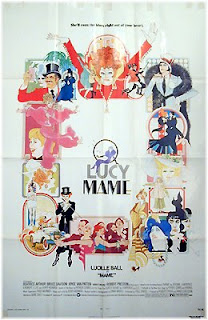 After you finish this blog, head to the comments to let me know what Lucy moment you’ll be thinking about on Lucy’s 100th birthday! 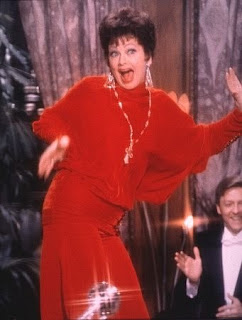 How many Lucys can fit in Jamestown?
EVERYTHING LUCY BLOG
Plenty of people will be saying, “I Love Lucy” this weekend in Jamestown as they dress up like Lucille Ball. Jamestown is hoping to set a new Guinness World Record, on Lucille Ball’s birthday, for the most people dressed as television character Lucy Ricardo in one place, at one time.

A true class act showing you can be a Lady and still be funny! Miss you greatly, remember you fondly! ;) 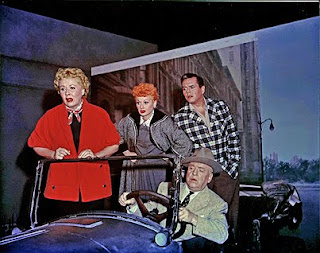 I have yet to meet ANYONE who seems to love Lucy (outside of her family) who loves Lucy as much as Glen Charlow. He seems to have devoted his life to all things Lucy. Check out his Lucille Ball website. Glen sent me the following list of Lucy Centennial celebrations going on today.

Lucy loving is breaking out all over! August 6 will be Lucille Ball's 100th birthday, and October 15 will be the 60th anniversary of the first airing of I Love Lucy. 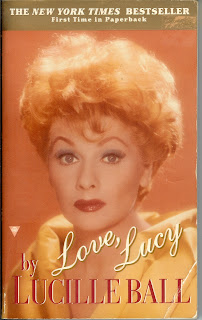 Here's a calendar of upcoming events and celebrations.

• Google is honoring comedienne Lucy on her 100th birthday with an interactive 'doodle' on its homepage that features classic clips from the TV show I Love Lucy. The interactive 'doodle' is an old television set that has 7 stations that feature classic clips from I Love Lucy. Some of the clips featured in the doodle include the infamous chocolate factory and grape stomping scenes.

• Jamestown, N.Y., Aug. 3-7, 2011: Lucille Ball Festival of Comedy Lucy Fest. Lucy's birthplace celebrates her 100th birthday, returning to a festival format that started in 1991. The headliners are Joan Rivers and Paula Poundstone. "Be a Lucy" by dressing as Lucy Ricardo for a Guinness World Record event, and attend a recreation of Lucy radio shows. There will also big a parade, baseball game and other family-friendly events. For the full schedule and more information see http://www.lucycomedyfest.com/. The Lucille Ball Desi Arnaz Center, 2 W. Third St., Jamestown, NY 14701. Phone 716-484-0800. Email info@lucy-desi.com.


• Washington, D.C., Aug. 4, 2011, through Jan. 28, 2012: I Love Lucy: An American Legend, exhibit at the Library of Congress. Free and open to the public, I Love Lucy: An American Legend explores the show’s history through the Lucille Ball and Desi Arnaz family scrapbooks as well as photographs, scripts, printed and manuscript music and other documents from the library. Location: Library of Congress James Madison Building, 101 Independence Ave. S.E., Washington, D.C. 20540. Phone 202-707-2905. Email pao@loc.gov.

• Washington, D.C., Oct. 15, 2011, Lucie Arnaz at the Library of Congress. (That’s all the information available now at LucieArnaz.com.)

• TCM will salute Ball with a 24-hour marathon that begins at 6 a.m. Saturday. The TCM list reveals Ball’s skill as the wisecracking supporting player in “Without Love,” “Dance, Girl, Dance” and “Stage Door.” TCM will offer her most dramatic film, “The Big Street,” with Henry Fonda. She is teamed with Arnaz in “The Long, Long Trailer,” one of her best movies. And she is breathtakingly beautiful in the “Du Barry Was a Lady.”

• The Hallmark Channel will air a 48 hour "I Love Lucy" marathon starting at 5a.m. Eastern Time on Saturday, August 6, 2011. http://www.hallmarkchannel.com/ilovelucy/home

• Sirius XM RadioClassics is marking the 100th anniversary of the birth of comedy legend Lucille Ball with a weekend long celebration on August 6th and 7th til Mid. ET. The channel will feature Lucy's best known radio work including multiple episodes of My Favorite Husband; the late 40s early 50s radio comedy that directly led to her TV series, "I Love Lucy". She will also be heard in a number of dramatic radio roles on the programs Suspense, Lux Radio Theatre and the Screen Director's Playhouse. RadioClassics host Greg Bell will be in Lucy's hometown of Jamestown, New York (located south of Buffalo) to broadcast from LucyFest. Highlights will include interviews with the following among others; comedienne Paula Poundstone; Barry Monush & James Sheridan (the authors of the book Lucille Ball FAQ); Gregg Oppenheimer, the son of "I Love Lucy" creator Jess Oppenheimer and more.


Join me tonight for a Pizza party and STAGE DOOR on TCM!

Tomorrow's blog will be a look back at The Waltons! Hope you'll all join me in celebrating that.

Posted by RichardSkipper at 3:01 PM