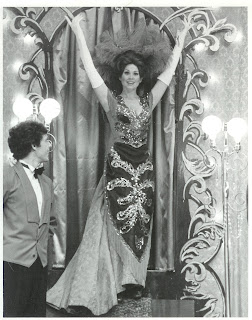 I had the good fortune to see Carol Channing play “Dolly”. Wow! Was that ever fun!  Her wonderful talent, delightful abandon, love and joy connected with the audience.
-Sue Ane Langdon

I'm very excited about today's blog, because I am writing about one of my favorite actresses. Her name has often appeared in crossword puzzles as a three letter word clue, due to the unusual spelling of the middle name she was often credited under (Ane instead of the more conventional spellings of Ann or Anne). I've mentioned on more than one occasion that I am a product of 70s television.Throughout the seventies, I saw LOTS of Sue Ane Langdon.
When I was out in California in January, I met Sue Ane's friend, Mark Wood, who told me Sue Ane had done a couple of productions of Dolly after he heard about my upcoming book.
Sue Ane Langdon is now retired from acting.
She began her performing career singing at Radio City Music Hall and acting in stage productions. She was born Sue Lookhoff in Paterson, New Jersey.
In August of 1976 Sue Ane had the privilege and pleasure of playing Dolly Levi at the Little Theatre on the Square in Sullivan, Illinois. 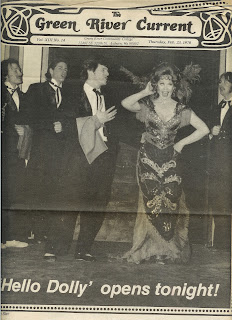 Mr. Guy Little had converted the local movie house to a proscenium theatre and over the years had booked almost every Hollywood star to appear in Broadway plays and musicals there.

Sue Ane was gracious enough to share the following with me.
Mr. Little had arranged for Jane Russell to appear in “Dolly”, but she had to bow out to do “Company” in New York.  He knew of Sue Ane from her TV and movie appearances and also that she had done a great deal of theatre throughout the U. S. including starring in “The Apple Tree” at the Shubert Theatre on Broadway with Alan Alda.

He called her agent, Ben Pearson and they made a deal!
It was Sue Ane's turn to connect her "Dolly" to the audiences in Sullivan. She was so very fortunate to have a wonderfully kind and talented actor named Art Kassell play Vandergelder.  Art had done the part before and he was patient and helpful with his latest Dolly, even to the point of going along with her doing the unforgiveable on opening night:  the “eat your beets” scene is terribly, terribly busy, and Sue Ane planted notes, lines and directions on pieces of paper under her plate, beside the mashed potatoes, and even mixed in with the beets, in case she needed help. 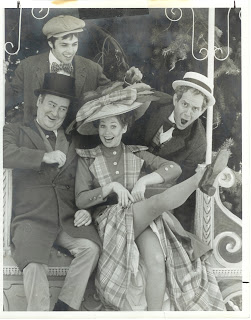 But from the beginning until she “clipped his wings” at the end, the audience laughed and clapped so much she had plenty of time to remember what to do or say next.  It was a wonderful sold out run and Mr. Little extended the show an extra week.  Sue Ane felt like she connected with those audiences because she had standing ovations every night, right up to closing.

By February of 1978, Sue Ane again donned Dolly’s bright red gown at the Green River Community College in Kent, Washington. And again she had a delightful and professional Vandergelder in Patrick Hart. Working with the students of the college made for a different atmosphere than the professionals in Sullivan but their enthusiasm was wonderful. Sue Ane worked at many colleges and universities and with many students thru the years, and these shows have always been most rewarding.

Not all shows are as well known and loved as “Hello! Dolly”.  Jerry Herman’s score is hummed and played and so familiar to practically everyone of almost any age. The music was written happy and familiar from the beginning!  Music, even Broadway music is so very different today… not

necessarily better!  Gower Champion’s staging is so comfortable and the timing is automatic.  All you have to do is realize there’s a laugh there, and go for it and with it! 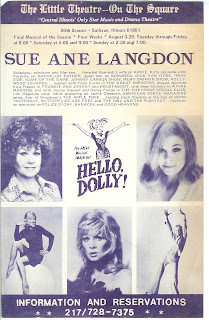 the chaos of our times rather than supply relief, joy, charm and humor.  Occasionally, some welcome ray of sunshine peeps through and there’s a “HAPPY” show and of course, thank goodness there’s always a revival of “Hello! Dolly”!

And now a little bit about Sue Ane beyond Dolly.

Langdon was featured in many comedies as well as an occasional dramatic performance. She appeared in a pair of Elvis Presley movies, Roustabout and Frankie and Johnny. Her starring role as the wife in the CBS television series Arnie won her a Golden Globe Award for Best Supporting Actress - Television.
Her film debut came in 1961's The Great Impostor, which starred Tony Curtis. Langdon went on to have leading roles in films such as The Rounders (1965) with Henry Fonda and Glenn Ford (which included a memorable scene involving her exposed buttocks) which landed her in Playboy as well...both nude appearances were in conjunction with their respective films, shot on the set, not as a separate "layout" or "spread" as in a centerfold!, A Guide for the Married Man (1967) with Walter Matthau A Man Called Dagger and The Cheyenne Social Club with Fonda and James 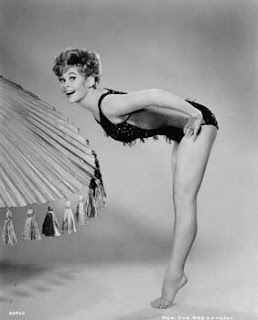 Stewart. She also appeared with Sean Connery in a short but memorable scene in 1966's A Fine Madness which led to her posing nude for Playboy magazine. In that same year of 1966, United Artists Pictures released Frankie and Johnny in which Langdon co-starred along with Elvis Presley, Donna Douglas (Elly May Clampett of The Beverly Hillbillies fame) and Harry Morgan (of Dragnet and later M*A*S*H fame).

Langdon was the third actress to play Alice Kramden in Jackie Gleason's The Honeymooners sketches and shows, preceded by Pert Kelton and Audrey Meadows and followed by Sheila MacRae and Meadows again. Langdon shared a Life magazine cover with Gleason, but played the role only briefly in the 1960s version, during the American Scene Magazine era, before MacRae took the role over for the color hour-long musical versions.
She appeared as Kitty Marsh during the NBC portion (1959–1961) of Bachelor Father, starring John Forsythe, Noreen Corcoran, and Sammee Tong. The next year, she appeared twice on Rod Cameron's syndicated crime drama COronado 9. In 1962, she appeared as 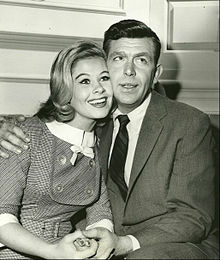 nurse Mary Simpson in an episode of CBS's The Andy Griffith Show and as Kate Tassel in The "Catawomper" episode of Gunsmoke. She made guest appearances on such series as Mannix, McHale's Navy, Bonanza, Ironside, Perry Mason, Banacek, The Wild Wild West, The Dick Van Dyke Show, Three's Company and Happy Days.
In most of her films, Sue Ane played "the funny girl". It's probably because-- well, because she's funny!
(Source for the biographical section, Wikipedia)

Tomorrow's blog will be..Angelo Parra on the occasion of his new book, Playwriting For Dummies