“Forget past mistakes, forget ‘failures’, forget everything but what you’re going to do NOW, and DO IT” - William James "Will" Durant

Happy Saturday!
Today, I’m writing about one of my favorite entertainers, Georga Osborne on the occasion of her birthday! IF you know her, there is no questioning as to why she is my favorite. IF you don’t know her, ‘google her” and you will soon see why. I fell in love with her when I saw her cabaret act I’m not sure how many years ago.

Georga's tribute to Mrs. Miller and her gypsy medley (not what you think!) was worth the price of admission.

This was one show I saw a couple of times and the second time was just as entertaining and funny. I even got the luxury of performing with her outside her hometown of Maysville, Kentucky at an event hosted by Nick and Nina Clooney!  What a fun time that was!She even joined me and a group on a cold rainy morning in May to celebrate Dolores Hope's 100th Birthday for CBS Morning News.
I asked Georga who the most iconic person is that she ever met and if that person lived up to her expectations.
Her answer was Paul McCartney. She got to work with him on one of his classical pieces at Carnegie Hall. He was generous and more than lived up to his iconic status. He was also kind and was at every rehearsal. He was helpful and available to everyone. He autographed albums and posed for pictures. She feels that he is probably the most famous person she has ever met.

Georga knew that she wanted to pursue entertainment as a career from the moment she was a child. Her parents were charter members of the Maysville Players. She grew up in a theater, watching rehearsals. That was often her babysitter. Her sisters and she had a quartet and were always performing. It just seemed the thing to do.
Georga says one of the things you have to be in this industry is open to change and new ideas and “never
meet a stranger”. Connect, make plans, and do things with people.
Here is a cliff notes account of Georga’s life to this point: She is the seventh daughter. She was born on the seventh day of the seventh month of the seventh year of a decade.
She was in a quartet with three of her older sisters. High school and college included singing and being part of bands, voice lessons, and being part of the Maysville Players. Went to college and graduated with a bachelor’s degree from Carnegie Mellon. Then she went to Florida and studied voice with Beverly Wolf for two years. Then she got a masters in Opera. She began her professional career in Opera. Then she moved to New York City and auditioned for musical theater and never looked back. She got her Equity card at her first Equity audition for The Sound of Music in 1988.She got her first Broadway job in 1989 in Meet Me in St. Louis. Then she did her first cabaret act in 1991. She just kept working and continues to do so!
She didn’t do a lot of dancing in Meet Me in St. Louis. When she did the tour of My Fair Lady, Matthew Bourne came in to supervise the dancing. He made it work for the cast. Georga says she is someone who moves well and she can “get it” eventually but she admits she is slow on the pickup.  For that reason, she finds it difficult to go to dance calls. She knows she can do it; she just needs time.
The life lessons she learned from her parents is to “always have an extra bean in the pot because you don’t know who will be there for dinner.”
As I do with most of my blogs, I mentioned my desire for Carol Channing to receive the 2012 Kennedy Center Honor (Please sign the petition below!). I ask Georga for her thoughts on this. Georga says, “well, first of all, she’s an American icon.” She is so recognizable as Dolly and as the “Little Girl from Little Rock.” She speaks and is American Musical Theater!

The work that Georga is most proud of as an entertainer is Souvenir which she did at The Weston Playhouse last summer. She also did two performances in New York, as well. It kills me that I missed this! She loves playing Florence Foster Jenkins.
If she could go back and speak to her twenty five year old self, she would say, “Take that job that Jay Binder offered you!” (Jay Binder is a top casting director in New York). This was right after opening on Broadway in Meet Me in St. Louis. The next offer that came her way was a regional theater gig and she turned it down because she was convinced that she was going to have a Broadway career. She was so green. It was a whole different ball game back then. She turned down a job that she never should have. It was a Gilbert and Sullivan production at the Huntington Theater. She felt that she would now be a Broadway actor. Lessons learned the hard way...
In today’s market where it is getting harder and harder to reach audiences, Georga still relies on e-blasts. She also does Facebook posts. She hasn’t entered the world of Twitter. She also hasn’t produced her own show much since 2004 when she did her last cabaret show. She hardly ever mails anything anymore. Everything is now done electronically. 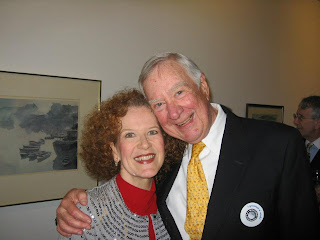 As a singer, I asked Georga what her routine is to combat vocal challenges. She does the neti pot. She gargles. If she is dry or swollen in her throat, she puts papaya enzymes on either side of her gums between the gums and the cheeks. Get Nature’s Plus brand and let them dissolve. They create moisture in the mouth and in the nasal passages. It reduces swelling and prevents laryngitis.  She vocalizes and she doesn’t have dairy products twenty four hours prior to a performance. She just takes care of herself.
When Georga went into this business, she thought she was going to be like Carol Burnett, Judy Garland, Lily Tomlin, and Beverly Sills all rolled into one. To some extent, she does what they all did. Georga’s priority is doing the work rather than being famous.
When she is preparing for a show, it is about “life stuff” as opposed to doing a theme show such as honoring a particular composer. She did do a Rosemary Clooney show once because she knew her celebrating the songs she made famous and recorded. Even then, it was related to Georga and her story. If a song speaks to her, she tries and works it in. She doesn’t always perform it the way it was intended. Gypsies, Tramps, and Thieves combined with the Habanera comes to mind!
Myles Savage from The Platters gave me this next question and I love Georga’s response! Myles asks Have you shared any loved today? Georga says, “I’m talking to you!”
Georga’s fondest memory is sitting on her back porch steps as a kid on a summer night eating watermelon with her family. I thank Georga for the wonderful memories she has given me! Here are a few more memories, Georga!

My favorite memory of Georga is when she volunteered to perform during a telethon I was helping to produce many years ago for a children's hospital for cancer illnesses. It was only broadcast on local access cable, but that didn't matter to her. She didn't do it for the exposure, she did it for the kids we were trying to help. This is a true testament to her generosity of spirit and the compassion of her heart. And of course, she brought the house down with her rendition of Frank Loesser's "Can't Stop Talking"! The phones definitely lit up while she was on air!!! Thanks for bringing back a nice memory of a wonderful lady!
-Lynn Colbert Kandrac

Georga is a member of my and Sam's Texas Boys BBQ "club" despite her girliness.

So we pop around the BBQ joints around the city. Georga also worked for me as my assistant at Viacom and CBS for over 4 years. The best assistant I've ever had since she always shared her infectious laugh and a song around the office. She's one of my favorite people ever!
-Ray Hagg


Richard, I am delighted to send birthday regards to the delightful, wonderfully talented Georga Osborne. Georga was part of  "A Tribute to Donald Smith" on Dec. 1, 2011 at Urban Stages, hosted by Klea Blackhurst, as part of the Winter Rhythms Series I produced with the theatre's Artistic Director, Frances Hill.  This was Donald's last public appearance before his death in March, 2012.  It was a moving,
memorable evening featuring some of his favorite performers, including Georga, Klea, KT Sullivan, Jeff Harnar, Nicolas King, Valerie Lemon, Colleen McHugh, Karen Oberlin, T Oliver Reid and Jennifer Sheehan, with musical direction by William Zeffiro   She sang her very funny tribute to The Sound of Music as one of the nuns, pausing when other parts would happen, which still makes me laugh when I think of it!  This photo was taken by Maryann Lopinto after the show.  Back row: Me, Gretchen Reinhagen.  Front row:  Donald Smith, Georga, Janice Hall.  Happy Brithday, Georga!  Best, Peter Napolitano.

What can I say about my dear friend Georga! She is one of the most generous, courageous, kind and funny people I know! We have had a very long friendship that began at the Gershwin Theatre when we were in MEET ME IN ST LOUS. Together, we planned and hosted MMISL's 20th Anniversary celebration a few years ago. And now, whenever I am in the City, she is a favorite dinner and theatre companion! I just adore her, and I can't ignore her...She's my Georga!
-Craig A Meyer

I have known Georga Osborne for almost 30 years. We met during a production of The Sound of Music. Georga was one of what we lovingly referred to as the "Bull Nuns". We had an instant connection because Rosemary Clooney, my mother-in-law, came from Maysville, KY and so did Georgia. I was so green when it came to musical theater and Georga was so talented. Her big warm welcoming personality set me at ease. The off stage (OK, sometimes on stage) shenanigans can still make me smile. I can conjure the sound of her one of a kind laugh in an instant and I hope we get a chance to work together some time in the future.
Debby Boone Ferrer

Thank you to Georga Osborne for the gifts you have given to the world and continue to give!

My next blog will be...Patricia Ward Kelly (Mrs. Gene Kelly)

Posted by RichardSkipper at 2:22 PM