I’m not into one hit wonders. Clive Davis

Happy MONDAY April 4th, 2016!
April 4 is the 95th day of this year. There are 271 days remaining until the end of the year.
On the Roman calendar, this was known as the day before the nones of April (Latin: Prid. Non. Apr.).
Here in New York, it is COLD! We have had some beautiful spring like weather, but this is a sick April Fool's joke from mother nature. Here, however, it is warm in my office and I am looking forward to ALL that the day holds in store for me.
Today, is the birthday of Clive Davis. If any of my readers have a connection with him. He is on my bucket list of interviews. He is one of the biggest movers and shakers in the music industry. I would love to discuss the changes he has seen first hand and what he has embraced and what has been difficult for him.
There are other musical gems associated with this date. In 1964, The Beatles occupy the top five positions on the Billboard Hot 100 pop chart.
In history, in 1968 – Apollo program: NASA launches Apollo 6. 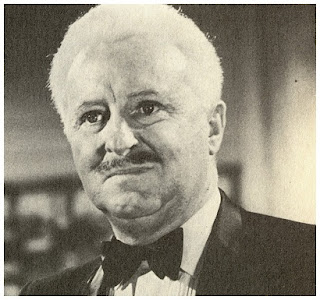 career at the Cleveland Playhouse after the war. He made his Broadway debut on January 21st, 1949 in the play "Leaf and Bough", co-starring Charlton Heston. Unfortunately, the play was savaged by New York theater critics and abruptly closed after only three performances. David returned to Broadway in 1950 in a play entitled "The Birdcage", co-starring Maureen Stapleton. In 1952 David made his television debut in The Philco Television Playhouse production of Rich Boy, co-starring Grace Kelly.
Rosemary Lane and Frances Langford were both born on this date in 1913.
Elizabeth Wilson (April 4, 1921 – May 9, 2015) was a Tony Award-winning American actress whose career spanned nearly 70 years, including memorable roles in film and television. Wilson was inducted into to the American Theatre Hall of Fame in 2006. It is also the birthday of  Arthur Murray, born in 1895.
April 4 is the birthday of Kenneth Mars, He appeared with Madeline Kahn in What's Up, Doc? and Young Frankenstein.

For every minute you are angry you lose sixty seconds of happiness. ― Ralph Waldo Emerson

In memory, everything seems to happen to music. Tennessee Williams

Caroline McWilliams (April 4, 1945 – February 11, 2010) is best known for her portrayal of Marcy Hill in the television series Benson.McWilliams was a regular on the CBS soap, Guiding Light (as Janet Norris) for several years and also appeared in a short-term role (as Tracy DeWitt) on the NBC soap Another World. She also had a recurring role on Beverly Hills, 90210 playing the mother of Jamie Walters' character Ray Pruit.

Notable Transitions on this date
I would be remiss if I did not acknowledge that this is the date that Martin Luther King, Jr. was assassinated. We can only speculate about what would have lied ahead. You gave your life so that all Americans can be free, Dr. King. Rest
in Peace.
1983 – Gloria Swanson, American actress (b. 1899). I was lucky enough to have met her two years before her passing.


Gloria Swanson went to public schools in Chicago; Key West, Florida; and San Juan, Puerto Rico. Her film debut was as an extra in The Fable of Elvira and Farina and the Meal Ticket (1915). From the following year on, she had leading roles in pictures for Keystone, then a year with Triangle, and, in 1919, a contract with Cecil B. DeMille. DeMille transformed her from a typical Mack Sennett comedienne into a lively, provocative, even predatory, star. She collected husbands (e.g., the indigent Henri de la Falaise) and lovers (e.g., Joseph P. Kennedy, father of President John F. Kennedy). Kennedy produced her Queen Kelly (1929), directed by Erich von Stroheim (it was von Stroheim's copy of this film that Swanson was watching as Norma Desmond in Sunset Blvd. (1950) when she leaped into the projection beam shouting, "Have they forgotten what a star looks like? I'll be up there again, so help me!"--ironic in that the butler-projectionist was, again, vonMusic in the Air (1934), but her kinds of films were over with by that time. She returned to the stage in the 1940s (Reflected Glory,  "Let us Be Gay," "A Goose for a Gander"). She was a clothes designer and artist; she founded Essence of Nature Cosmetics; and she made television appearances through the 1960s and 1970s, doing cameos and pushing health foods. She received Best Actress nominations for Sadie Thompson (1928), The Trespasser (1929) and Sunset Blvd. (1950).

Stroheim). She survived the switch to talkies, even learning how to sing for
- IMDb Mini Biography By: Ed  Stephan
1995 – Priscilla Lane, American actress (b. 1915)

Time is a precious thing. Never waste it. Gene Wilder 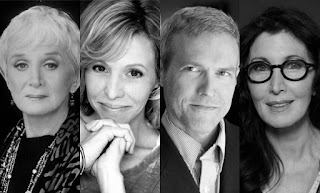 In Other Entertainment News
Who would like to join our party tomorrow night? I'm looking forward to seeing William V Madison, Joanna Gleason, Barbara Barrie, Austin Pendleton, Maddie Corman celebrating Madeline Kahn and William's biography. It is all moderated by Valerie Smaldone. Check out my interview with Valerie in yesterday's blog. Don't you know the meaning of propriety?
Click HERE for more details.


The 31st annual Bistro Awards, March 8: It was

a moment in jazz history: Standing on the small stage together at the end of our show at Gotham Comedy Club was jazz legend Jon Hendricks (ASCAP/Bob Harrington Lifetime Achievement Award), Annie Ross (Outstanding Contributions to the World of Jazz), Janis Siegel (Sustained Excellence in Jazz Performing and Recording),Yolande Bavan (formerly of Lambert, Hendricks  and Bavan), and Grammy-winning jazz vocalist Kurt Elling, who introduced and presented Mr. Hendricks with his Bistro Award. (from Sherry Eaker)


I would like to end this blog today by celebrating one of cabaret's greatest assets, George Sanders. He has been a part of the cabaret scene for as long as I can remember.
Today is his birthday. Here is our MINI interview!
What does this birthday mean to you?
Getting closer to Social Security!

What is your Morning Motivation?
What is this thing called “morning”?

It’s Twitter’s 10th birthday. So how do you feel about it now – love it or hate it?
What is this thing called “Twitter”?

What is your dream gender reversal role?
When I was in my twenties, I wanted to play Cecily Cardew in The Importance of Being Ernest.  Now I would like to play Lady Bracknell.

What do you still want that you don't have now?
Not much.  A pool home in Palm Springs?  A pool boy?

What are you doing to make the world a better place?
Recycling.  Never buying things in plastic bottles that are available in boxes, glass, or cans. (i.e.  Laundry detergent, dishwasher detergent, Windex, soda, etc.)

What makes you look so young at your age? (from Pat Cooper!) 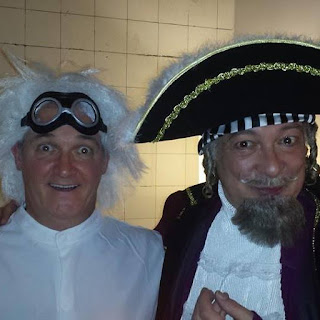 Thanks, Pat.  But we haven’t seen each other in 20 years.  You have no idea what you’re talking about. 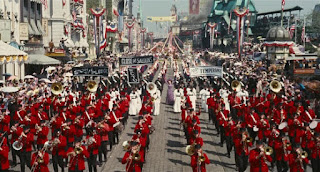 PLEASE CELEBRATE WITH US THURSDAY NIGHT April 7th in NYC


Posted by RichardSkipper at 7:52 PM