Celebrate Christmas tonight with Home For The Holidays and David Edwards! 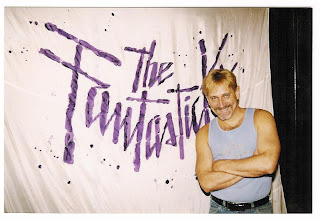 "Your only competition is yourself"
Happy Saturday!


Tonight, I'm very excited to be attending Westchester's Broadway Theatre to see a Christmas jukebox musical.
I've been to WBT many times over the past 30 years and always have a great time. Westchester's Broadway DINNER Theatre is a dying breed. The idea of going to a great show and having a nice dinner all wrapped up in a nice little package.
The above quote is actor, director, writer David Edwards' personal philosophy in life and I am learning it suits him to a "T"! 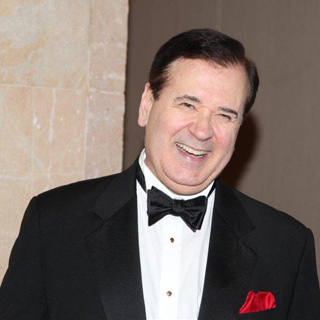 My entree into David Edwards and Home For The Holidays actually started a few months ago when I did my blog on Lee Roy Reams.
I heard from David Edwards. David had worked with Lee Roy and one thing led to another.
A new Facebook friendship was formed and so today's blog is celebrating David Edwards in anticipation of tonight's show. I will be doing a follow-up on that tomorrow.
David has had the pleasure of participating in several holiday offerings from the Westchester Broadway Theatre over the years as an actor, but this year he'll present a story of his own. HOME FOR THE HOLIDAYS, a Christmas jukebox musical will play throughout December.
DAVID EDWARDS appeared on Broadway in BY JEEVES and THE ROTHSCHILDS and played both Max Bialystock and Roger DeBris in the National Tour of THE PRODUCERS (with Lee Roy Reams).  Off-Broadway credits include ROOM SERVICE, THE FANTASTICKS (as the final “El Gallo”), THE DISPUTATION, DR. SEX, BITTERSUITE (cast album),  THAT’S LIFE, WHAT’S A NICE COUNTRY LIKE YOU DOING IN A STATE LIKE THIS?, WHAT’S THAT SMELL: THE MUSIC OF JACOB STERLING.  WBT audiences will remember him as Don Quixote in MAN OF LA MANCHA, Albin in LA CAGE AUX FOLLES, Scrooge in A CHRISTMAS CAROL, and Howard in  MESHUGGAH-NUNS (among others), and as the director of THE PRODUCERS.

Regional credits include  1776 (John Adams), A LITTLE NIGHT MUSIC (Fredrick), LITTLE ME (Star Ledger Award-Best Actor), CAMELOT (King Arthur), A FEW GOOD MEN ( Col. Jessup), NOISES OFF,  Tom Stoppard’s ROUGH CROSSING, at such theatres as The Old Globe, The Ordway, Syracuse Stage, GeVa, Portland Stage, Gateway Playhouse.  Film: BELLY, THE FANTASTICKS: TRY TO REMEMBER.  Television :“Eternal Light”, “MESHUGGAH-NUNS  tv Special”, “The Good Wife.”
He has sung with , Skylight, and Virginia Opera companies, and as guest artist with symphony orchestras across the country.  Voice of Ellery Queen for Chivers Audio Books.  As a theatre director his credits include “By Jeeves” (Meadow Brook Theatre) for which he received an Oscar Wilde Award nomination, “ The Producers” (Westchester Broadway) , “Meshuggah-Nuns” (Gateway Playhouse), “Rumors” , “South Pacific,” “Showboat,” and“Last of the Red Hot Lovers” (all at Surflight Theatre),  and the world premiere of “The Magician of Lublin.”
Visit www.davidedwardsonline.com.

When David was a toddler, his grandmother took him to see THE SOUND OF MUSIC on Broadway with Mary Martin.  His dad still can't believe he remembers it because he was so young, but he remembers vivid images of the show and wanting to be one of those kids on the stage. David caught the theatre bug for sure, and for years he thought all nuns were actresses.


David’s mother had been a professional dancer before he was born.

Before Home For The Holidays, David played the neurotic director Carleton Fitzgerald in Moss Hart's LIGHT UP THE SKY at the Centenary Stage Company.


Since all my blogs focus refer to Carol Channing, I asked David his thoughts on Carol Channing. His response is that she is adorable and irreplaceable--a national treasure--and she's an ornament on his Christmas tree (thanks to Broadway Cares). Mine, too!


D      David tells me that being a survivor and making a living almost exclusively in the theatre as an actor and director.  Also, he has a very special place in his heart for the honor of having been the last "El Gallo" in the original production of THE FANTASTICKS--the last guy to sing "Try to Remember" at the Sullivan Street Playhouse.  I am looking forward to Home For The Holidays tonight! Co-written by Tony Javed, the score is a memorable mix of old favorites and new classics wrapped in a story of traditonal holiday themes of love and hope told for today's audiences. A Christmas show is a great way to bring the spirit of the season into your life, so if you're in the area and looking for something to do, why not join in some family fun? With their soldier son hoping to get be home from Afghanistan for Christmas, daughter who is in college on the West Coast finishing final exams also preparing to come home for Christmas, and younger children preparing for their Christmas pageant the show follows the journey of a “typical” American family from the day after Thanksgiving to Christmas Eve as they surmount the challenges of modern life and, ultimately, rediscover the true meaning of the season.

Enjoy favorites like White Christmas, The Christmas Song, Carol of the Bells, Jingle Bells, Here Come Santa Claus and Home for the Holidays; old standards such Count Your Blessings and We Need a Little Christmas; and discover few new classics you’ll want to add to your holiday playlist!
Come HOME FOR THE HOLIDAYS
to the Westchester Broadway Theatre!
Next David will be doing IONESCOPADE, the musical
based on the writing of Ionesco at the York Theatre opening Off Broadway in January.
Don't be a Scrooge! Reserve today: Dec 20

This is the the second installment of this series.
Once a month, I will be celebrating a different theme. A Benefit for Carol Channing's Foundation for the Arts.
Rosemary Loar, Miles Phillips, Diane J. Findlay, Maureen Taylor, Leslie Orofino, Scott Coulter, Carol J. Bufford, Karen Oberlin, Julie Reyburn, AND... Raissa Katona Bennett! RESERVATIONS A MUST! $25 show plus two drink minimum, $50 PREMIUM SEATS plus two drink minimum. PLEASE CALL 845-365-0720 TO RESERVE.
DO NOT CALL THE TRIAD. 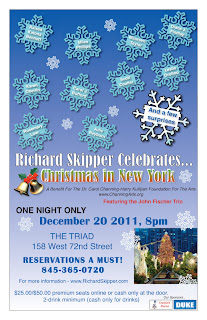 Websites of the entertainers in this blog are THE MAIN SOURCES OF THIS  BLOG. NO COPY WRITE INFRINGEMENT INTENDED.  FOR ENTERTAINMENT PURPOSES ONLY!
Please do what YOU can to be more aware that words and actions DO HURT...but they can also heal and help! 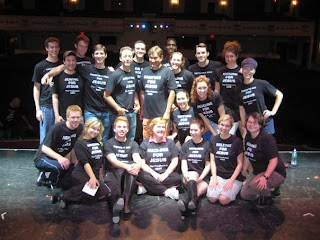 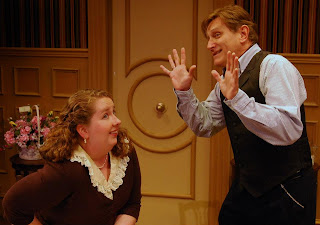 I cannot wait to see David on stage tonight!
David was back on the boards in another classic by Moss Hart. In LIGHT UP THE SKY at Centenary Stage Company he played a theatre director whose passion is only surpassed by his over-the-top temperament. The reviews are glowing for his Centenary debut...!
"The clearest voice[s] and most cogent performance[s]...provided by David Edwards, who swans about elegantly as the weepy
director..."
-- Michael Sommers, The New York Times
Here's to an INCREDIBLE tomorrow for ALL...with NO challenges! 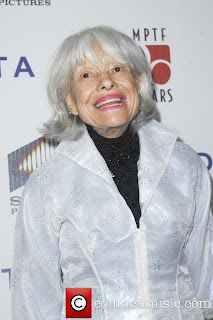 
TILL TOMORROW...HERE'S TO AN ARTS FILLED DECEMBER! 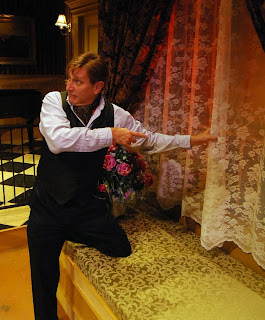 Posted by RichardSkipper at 5:45 PM