Jerry Bell was born in Birmingham, Alabama with a dream of Broadway.
Hello, Dolly starring Dorothy Lamour was Jerry’s first big job in his career. He had done some summer stock prior, but nothing on this scale. This was 1967. He simply went to an open call in New York.

Jerry and Dorothy became good friends. He used to get a Christmas card from her every year with the American flag on it. She was very patriotic.

Dorothy was also very bright. No matter what happened, nothing ever threw her on stage. She had worked with Hope and Crosby.
They improvised everything.
As soon as they showed up on the set and started filming, they just threw away the script. They purposely tried to break her up. That gave her amazing training. When they opened, they opened in Bloomington, Indiana on Jerry’s birthday, November 14th. 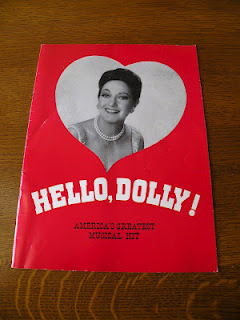 They never got through the final dress rehearsal the night before. They ended at midnight. They had to by Equity rule.
The next day, their first performance, after the Dolly number, they bring her table and chair out in order to do the eating scene with Vandergelder. Jerry was supposed to bring out her chair. He was so winded after the title number that he could not think of anything else beyond getting to the water fountain.
The music for her chair was perfectly timed for a “bump” as she sat.
As he was at the water fountain, he heard the music and thought, “Oh? What’s that?” He suddenly realized that he had missed his cue. He ran back on stage as they were playing it again. She turned to the conductor and said, “Could you play that again, please?” A fast acting “Rudolph” brought the chair as the orchestra repeated the musical accompaniment. This time it worked as it was supposed to. She looked out at the audience and said, “Now, that’s the way it is supposed to be.”
Afterward, Jerry went to her dressing room to apologize. She told him not to worry about it, those things happen. Jerry stayed with the show the entire length of the tour, nine months.
A year later, Jerry appeared in Dolly with Yvonne De Carlo. She, unlike Dorothy Lamour, was the very typical movie star. When De Carlo decided that she was not going to do a number, it was out of the show that night.
So Long, Dearie was cut half the time. That is Dolly’s ONLY solo number. She would just tire out and decide that she was not going to do it.
A year later, she was doing Follies on Broadway, playing Carlotta and singing I’m Still Here. Roy and Donna Barry were a husband and wife team in that show.
Roy once said to Jerry, “Well, she’s at it again.
If she has a problem trying to find a place to park her car, she would tell the stage manager, ‘I’m not doing the show tonight. I cannot find a place to park.’” Dorothy Lamour would never stoop to those antics.
The Yvonne De Carlo had already been on the road for six weeks when Jerry joined the company. With De Carlo’s Company, there were a lot of one night stands. Dorothy Lamour’s Company had longer engagements in each city. 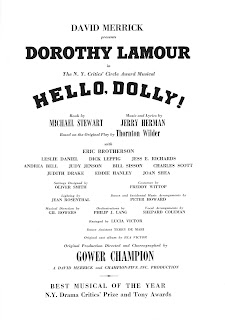 Both were bus and trucks.
De Carlo’s was produced by Ken Gaston, not Merrick, and was a very cheaply produced Company. He was not very professional. He was someone with a lot of money having fun at everyone else’s expense.

The sets were based on Oliver Smith's Broadway designs but scaled way down; the costumes were impressive recreations of Freddy Wittop's originals.

Gower Champion's original staging and choreography were recreated by Lucia Victor. De Carlo played the part with an Irish brogue (Dolly GALLAGHER Levi). Don De Leo played Horace Vandergelder.Once they were playing Springfield, Illinois, but their costumes and sets went to Springfield, Missouri! They did the entire show without costumes and sets!

Offstage, Yvonne was nice. She wasn’t as approachable as Dorothy. It was a really hard time for Yvonne. She had married the stuntman Robert Drew Morgan, whom she met on the set of Shotgun, on November 21, 1955. They had two sons, Bruce Ross (b. 1956) and Michael (1957-1997). Morgan also had a daughter, Bari Lee (b. 1947), from a previous marriage. Morgan's left leg had to be amputated after he was run over by a train while doing stunt work on How the West Was Won (1962). However, his contract with MGM assumed no responsibility for the accident.
De Carlo and Morgan filed a $1.4 million lawsuit against the studio, claiming her husband was permanently disabled. She only did Hello, Dolly to pay the medical bills. She wasn’t having a good time. Jerry doesn’t feel that she enjoyed herself during this tour. De Carlo divorced Morgan in June 1974.
Audiences liked her, but in that role, audiences can’t help but like Dolly.
Dorothy got better applause that Yvonne. She was more loved because of the Road movies.

Dorothy Lamour desired to play Dolly on Broadway, but alas, it didn’t happen.
Dorothy was a great singer.
Dolly’s determination to rejoin the human race and marry Horace Vandergelder is a theme that audiences still gravitate to.
He thinks the show should absolutely come back to Broadway. He says no one will ever be as great as Channing. He thinks Bette Midler would make a great Dolly.
The fact that there was so much dancing for the ensemble is the aspect that Jerry loved most about being in Hello, Dolly!
Jerry saw almost every Dolly on Broadway.
Carol Channing: Spectacular
The main thing with Ginger Roger was that she looked so pretty, so gorgeous. She was fun and charming.
Martha Raye was wonderful. She brought tears to your eyes. She WAS vulgar at times. During the courtroom scene, she took a sip of water and did a spit take and said, “It’s water!” That was NOT Gower’s staging. It was tacky.
Betty Grable was a favorite star of Jerry’s. He had been a fan since he was a young boy. Her movies were popular during his youth. She was a dream come true to see on stage.
Pearl Bailey was a laugh riot.
After Channing, Merman was Jerry’s favorite Dolly. Merman was another favorite of Jerry’s.
The very first show he ever saw in New York was Merman in Gypsy.
She just blew him away every time he ever saw her.
The most exciting night he ever spent in the theater was the night that she and Mary Martin did their benefit for the Museum of the City of New York, Together on Broadway, May 15th, 1977.
It was just unbelievable. They did a double Dolly entrance at the top of Act Two that brought down the house. The only other theatrical experience, for Jerry, that matched that was Judy Garland at Carnegie Hall, April 23rd, 1961.
Jerry did not see Phyllis Diller.
He also saw Eve Arden do it in Chicago at The Shubert Theater in the summer of 1966 as Miss Channing’s replacement. He liked her a lot.
When a show like Hello, Dolly closes, an entire company is then out of work. It is a low key experience. Everyone feels like they will never work again.
Jerry had a fifteen year dance career and then he started his own off-Broadway theater company called Bandwagon. They did revivals of musicals. Jerry Herman once did a benefit for Bandwagon. Jerry Bell loves Jerry Herman! “He is the sweetest man in the world. He is terrifically talented.”
Hello, Dolly is close to being Jerry’s favorite musical because of the joy it exudes. His favorite musical, however, is Follies.
Thank you Jerry Bell for the gifts you have given to the world and continue to give!

Check out my site celebrating my forthcoming book on Hello, Dolly!
This book will be a celebration of this great American classic.
If any of you reading this have appeared in any production of Dolly, I'm interested in speaking with you!

My next blog will be...My Exclusive interview with Judy Knaiz, Gussie Grainger/Ernestina Simple in the film, Hello, Dolly!


TILL TOMORROW...HERE'S TO AN ARTS FILLED DAY
Richard Skipper

Posted by RichardSkipper at 7:50 PM