A Celebration of The Tony Awards! 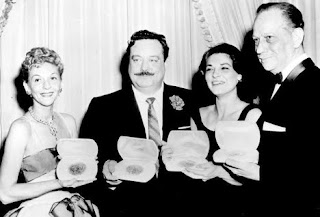 “There's no damn business like show business -- you have to smile to keep from throwing up.”
Billie Holiday

The Tony, named in honor of Antoinette Perry, remains one of the theatre's most coveted awards and is annually bestowed on professionals for "distinguished achievement" in the theatre.

The first awards were presented at a dinner in the Grand Ballroom of the Waldorf-Astoria on Easter Sunday, April 6, 1947. With Vera Allen, Antoinette Perry's successor as Wing chairwoman, presiding, the evening included dining, dancing and a program of entertainment whose participants included Mickey Rooney , 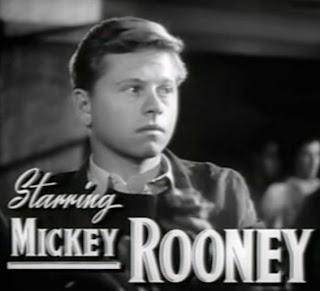 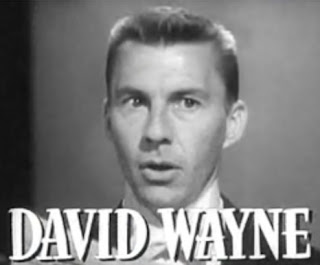 WOR Radio and the Mutual Network announced the awards at midnight.

From 1947 until 1965, the dinner and Tony Award presentation were held in various ballrooms of such hotels as the Plaza, the Waldorf-Astoria and the Hotel Astor. The ceremonies were broadcast over WOR radio and The Mutual Network and, in 1956, televised for the first time on Du Mont's Channel 5. Brock Pemberton, Mrs. Martin Beck, Helen Hayes. 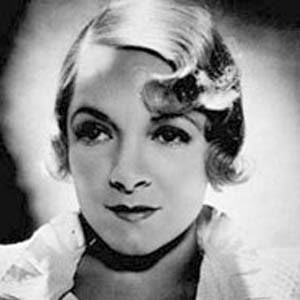 Helen Hayes Brown (October 10, 1900 – March 17, 1993) was an American actress whose career spanned almost 70 years. She eventually garnered the nickname "First Lady of the American Theatre" and was one of twelve people who have won an Emmy, a Grammy, an Oscar and a Tony Award. Hayes has also received the Presidential Medal of Freedom, America's highest civilian honor, from President Ronald Reagan in 1986.[1] In 1988, she was awarded the National Medal of Arts. She is the namesake of the annual Helen Hayes Awards, which have recognized excellence in professional theatre in the greater Washington, D.C. area since 1984. Perhaps the ultimate respect to be paid to any actor by a producer - of having a theater christened in their name - became a reality for Ms. Hayes in 1955 when the former Fulton Theatre on 46th Street in New York City's Broadway theater district was renamed the Helen Hayes Theatre. When that venue was torn down in 1982 (along with five other neighboring theaters), the operators of the Little Theatre, another standing theater two blocks away on 44th Street, renamed that house in her name, which it has retained ever since. 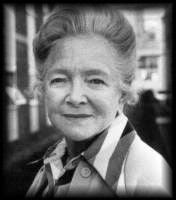 Helen Hayes was born in Washington D.C. on October 10, 1900. Her mother, Catherine Estelle (née Hayes), or Essie, was an aspiring actress who worked in touring companies. 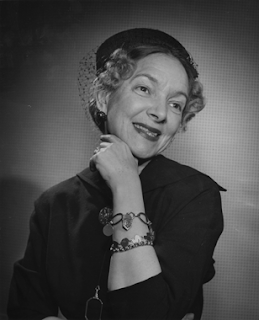 Her father, Francis van Arnum Brown, worked at a number of jobs, including as a clerk at the Washington Patent Office and as a manager and salesman for a wholesale butcher.Hayes' Irish Catholic maternal grandparents immigrated from Ireland during the Irish Potato Famine; her mother was a great-niece of Irish singer Catherine Hayes. 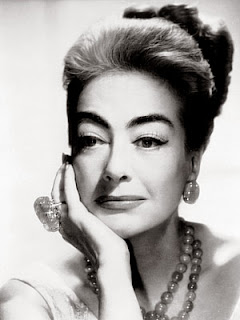 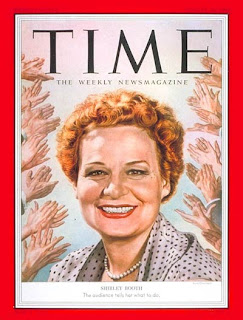 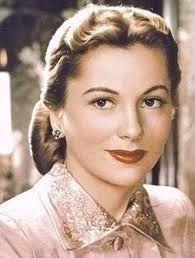 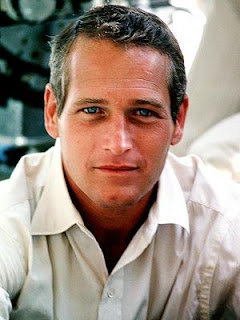 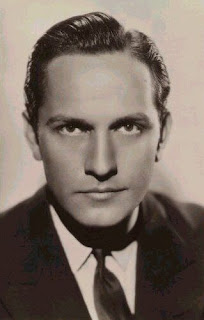 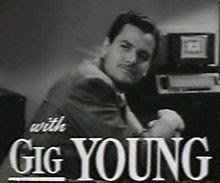 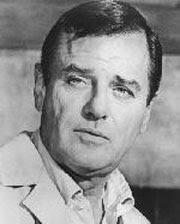 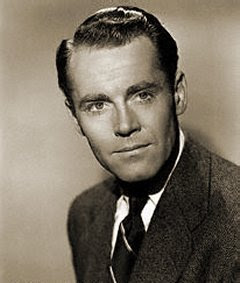 .
Born May 16, 1905 in Grand Island, Nebraska. He was the oldest of three children, born to William Brace Fonda and Herberta (nee Jaynes). William Fonda worked as a printer. When Fonda was still an infant, the family moved to Omaha, Nebraska, where his father opened a print shop. As a child, Fonda liked to write, winning a short story contest when he was ten years old.
After graduating from Omaha Central High School in 1923, Fonda entered the University of Minnesota to study journalism.
William Fonda insisted that his son hold a job while in college, and Fonda held two. He worked as a physical education instructor at a settlement house and for the telephone company. The strain of maintaining two jobs may have contributed to Fonda's dropping out of school after about two years.
In 1925, Fonda returned to Omaha, to look for a job in journalism. A friend of his mother's, Dorothy Brando (mother of famous American actor Marlon Brando), offered him a chance to audition for a part at the Omaha Community Playhouse. Dorothy Brando was an amateur actress and very involved with the group. Despite his inexperience, Fonda was cast as Ricky in You and I. Though initially unsure of himself, Fonda grew to love the experience. Soon he was spending a significant amount of time at the Playhouse, performing odd jobs such as ushering and set building.

The Tonys were televised intermittently in this period, with the awards typically given out following the 11 pm news. Look at those stars! It's true...they don't make them like that anymore...or do they?! Here are some great Tony memories. Hope yours is included.


Here are some great Tony Memories! 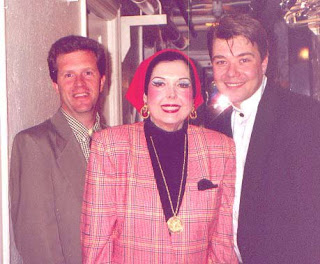 Performance of "The Circle of Life" that opened the 2008 Tony Awards, which celebrated the show's 10th year on Broadway. 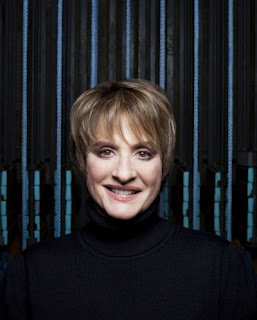 Patti LuPone's performance from the 2008 Tony Awards.
Patti LuPone swept the 2008 theatre awards, winning the Tony, Drama Desk and Outer Critics Circle Awards for Best Actress in a Musical and the Drama League Award for Distinguished Performance for her performance as Rose in the critically-acclaimed Broadway production of the classic Jule Styne-Stephen Sondheim-Arthur Laurents musical Gypsy, directed by the show’s author, Mr. Laurents.
Miss LuPone’s recent stage credits include her debut with the Los Angeles Opera in Weill-Brecht’s Mahagonny (the cd recording of that production recently won two Grammy Awards for Best Classical Recording and Best Opera Recording), the world premiere of Jake Heggie’s new opera To Hell and Back with San Francisco’s Philharmonia Baroque Orchestra, Mrs. Lovett in John Doyle’s award winning Broadway production of Stephen Sondheim’s Sweeney Todd (Tony, Drama Desk, Outer Critics Circle Award nominations – Best Actress in a Musical; Drama League Award for Outstanding Contribution to Musical Theatre), the title role in Marc Blitzstein’s Regina, a musical version of Lillian Hellman’s The Little Foxes at Washington D.C.’s Kennedy Center, a critically acclaimed performance as Fosca in a concert version of Stephen Sondheim’s Passion, which was also broadcast on PBS’ Live From Lincoln Center, and a multi-city tour of her theatrical concert Matters of the Heart. 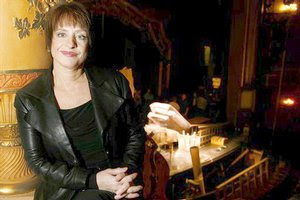 She has also performed Matters of the Heart internationally, including runs at Australia’s Sydney Festival and London’s Donmar Warehouse Theatre. Her CD recording, based on this concert, was named one of 1999’s best recordings by both The Times of London and Time Out/New York.


The 1990 Tony performance of "We'll Take A Glass Together" by my late friend Michael Jeter and Brent Barrett. 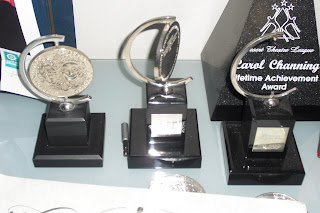 Here's to the next chapter! Much success tonight to ALL!

Tomorrow's blog will be about...
I'm open to suggestions

Posted by RichardSkipper at 1:52 PM