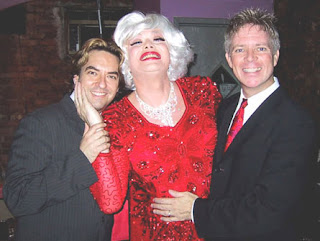 "In order to go on Living one must try to escape the death involved in perfectionism."
-Hannah Arendt, American philosopher and historian (1906-1975)

Happy Last Day of June!
Well, I hope that June was everything that you hoped it would be. My horoscope today tells me to Relax. Recharging my brain is as important as any of the other activities I do to maintain my health and well-being.
It's as vital as brushing my teeth, eating nutritious food or taking a shower.
That advice could be for all of us today!
Gear up for the riches of July! Can you believe that we are more than half way through 2011! Hard to grasp! Life is flying! What a great month entertainment wise. I saw Kimberly Faye Greenberg as Fanny Brice in ONE NIGHT WITH FANNY BRICE at St. Luke's Theatre (Highly recommended!).

My Uncle Parma Lee and Aunt Virginia came to NY to celebrate their 50th wedding anniversary! Their first time in new York!Great dinners with friends. Saw Jacqueline Jone at The Bruno Walter Auditorium. .

I appeared at The Ziegfeld Society's Summer Soiree: !
Marriage Equality went through in NY! 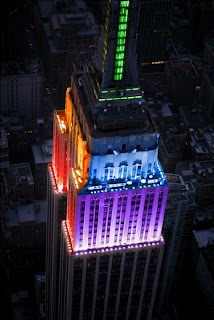 July is starting off with a bang for me! I have parties on Saturday, Sunday, Monday!
Next week, I am meeting with Paul Mitchell at The Network to come up with a game plan for my career over the remaining months of the year. I'm also joining forces with some amazing teachers for a series of workshops that we are putting together for the autumn. I am meeting with yet another attorney to try and regain control of MY career!

As far as shows are concerned. My friend David McBride is coming to NY! I'm getting a group together to go see him at The Metropolitan Room on July 10th at 9:30PM.
Please let me know if you would like to join our party. My blog on the 5th is featuring him!Singer DAVID McBRIDE performs "ICONS: A TRIBUTE TO VINTAGE LAS VEGAS"! 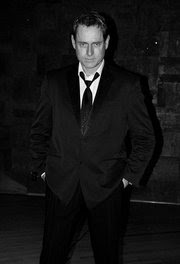 I also am seeing Baby Jane Dexter on July 15th (also at The Metropolitan Room)!Baby Jane has a NEW CD! Come celebrate the release of Jane's NEW CD, The Real World with me July 15th!
You can call now for reservations, 212-206-0440.
Show starts at 7 pm.
I hope to see you there!!! 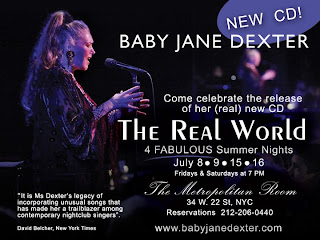 If you want to see cabaret at its best, don't miss this incredible show (now captured on CD)

"I now know that every moment, good and bad, is a gift and a lesson that has helped me be clear about who I am and what I do -- what I do is who I am."
-Baby Jane Dexter


Jane Dexter grew up in Garden City, Long Island, New York, the daughter of a dermatologist and a college physical education teacher and actress whose name was Jane Dexter. Thus, when little Jane needed a stage name, she became "Baby Jane". From her earliest days, Baby Jane was a performer, an imaginative little five-year-old who hiked her crinoline up under her arms and, inspired by The Jolson Story, sang "April Showers" into her hairbrush.

She did not have the usual educational progression, and moved from school to school. "I even went to a girls finishing school. I got an 'incomplete'," she jokes in her show. It was her desire to be a singer that motivated Baby Jane to begin working at age 14 in a local theater group. After school, she learned her way around sets and lighting and selling tickets. She wanted to perform and at this point became "Baby Jane Dexter". Still a student, she auditioned for, and got a job in the Broadway cast of Hair, which didn't last too long when she asked the director to hold her job while she went to Spain to get her teeth capped.

"Life is basically a work in progress.
It's about moving forward and finding out what's going to be." 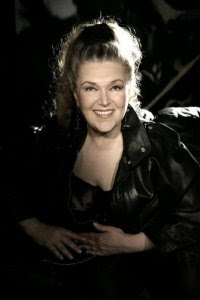 Adolescent Jane came home, went back to school, got a job driving a taxi on Long Island, and at night she traveled into Manhattan to a comedy club, The Improvisation, to be discovered. Her music was eclectic — rock, blues, rhythm-and-blues — performed between comedy acts of Jay Leno and Andy Kaufman. When she heard that a new club in Greenwich Village was opening and needed girl singers, Baby Jane went to the owner, Lewis Friedman, and asked to audition. She became his first opening act in the Paradise Room of the famed Reno Sweeney, the club that was to feature such up-and-coming young performers as Karen Akers, Peter Allen, Paul Reiser, and of course Baby Jane Dexter.
(Source: Elizabeth Ahlfors)

Join me on July 24th for CAROL CHANNING: LARGER THAN LIFE! Which I am in!!


And on July 30th for BOOMERS: PROMISES MADE NOT KEPT starring my friend Charlie Karel (pictured) as part of the NY Midtown Fringe Festival. 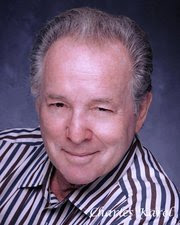 I'm putting it out there. I want a show! If anyone is casting and/or hiring, let me come in and audition for you! There you have my July! There are so many other things going on!

Email Post
Labels: food or taking a shower Marriage Equality went through in NY my health and well-being My Uncle Parma Lee and Aunt Virginia came to NY to celebrate their 50th The Ziegfeld Society's Summer Soiree