Happy Father's Day! A Celebration of The Greatest fathers of our time! 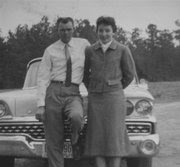 
Happy Father's Day!
That quote certainly sums up my dad! Happy Fathers Day to all the real men that made real sacrifices & took the responsibility to take care of their children. I love you Dad! 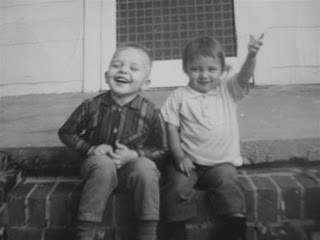 Father's Day is a celebration honoring fathers and celebrating fatherhood, paternal bonds, and the influence of fathers in society. It is celebrated on the third Sunday of June in many countries and on other days elsewhere. It complements Mother's Day, the celebration honoring mothers.
Richard Hampton Skipper (1935-2002)
My dad was 67 when he passed on. It's true, we had a volatile relationship. But I loved him. I truly never knew my father. I don't know if he had dreams and or ambitions that were never realized. I know that he worked and lived hard. One thing I can say, our father was always there. As a family unit, we were tight.
I was 18 when I left home. My father was 44. He had three more kids at home. I can't imagine what my life would have been like if I had had 4 children at the age of 44. 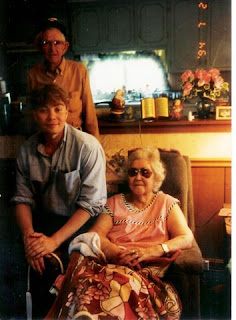 My father was born to Emory and Getha Skipper in Galivents Ferry, South Carolina. A very small rural tobacco farm. He was one of 10 children. There were actually 11, Uncle Wallace (also born on my dad's birthday) died 10 days after birth.
My mom, Wilmina Rabon,and Dad married in 1959. My dad was 24. Two years later, I was born. Thirteen months after that, my sister Debbie. 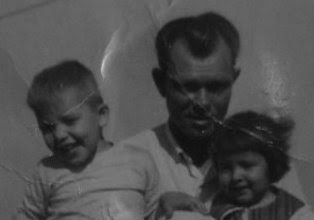 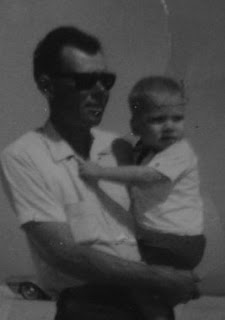 And there you have my immediate family! It's still hard for me to believe that my dad has physically been gone 9 years! But he is ALWAYS with me. I see his face looking back sometimes when I look in the mirror; his wallet is on my desk. Thank God for the photos I have. I truly do miss him.
Daddy, this blog is for you!
Celebrating the Greatest Dads in movies and television!
I conducted a Facebook poll asking my friends to list their favorite TV and movie dads. Here are the results in no particular order. Enjoy!
Dan Conner on Roseanne. Dan Conner is a primary fictional character in the Roseanne television series. He is the husband to fellow primary character Roseanne Conner, and father to two daughters, Darlene and Becky Conner, and two sons, D.J. Conner and Jerry Garcia Conner. He is portrayed by John Goodman. 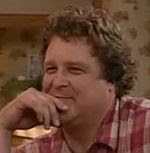 Throughout the years, Goodman has won several awards for his portrayal of Dan Conner, including a Golden Globe.
When he was chosen, co-star Roseanne Barr stated that she was happy, adding that she had a "big crush" on him from the start.
At one point during the second to the last season, Goodman walked off the set after co-star Roseanne Barr had an on-set outburst. It was speculated that he was growing tired of her outbursts. While he considered leaving for good, Goodman held negotiations with its producers. At first, he agreed to finish the episode, but later agreed to do an episode to explain his exit. However, Goodman eventually agreed to return to the series.


Bonanza is an American western television series that ran on NBC from September 12, 1959 to January 16, 1973. Lasting 14 seasons and 431 episodes, it ranks as the second longest running western series (behind Gunsmoke) and continues to air in syndication. Centering around the Cartwright family in the Lake Tahoe area, the show stars Lorne Greene as BEN CARTWRIGHT, Pernell Roberts, Dan Blocker, Michael Landon, and David Canary. 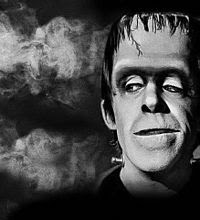 is a fictional character in the CBS sitcom The Munsters, originally played by Fred Gwynne.
The patriarch of the Munster household, Herman is an entity much like Frankenstein's monster 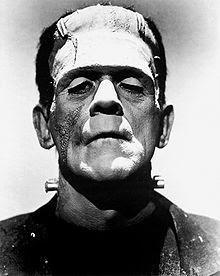 along with Lurch on the show's competitor The Addams Family.

The Cosby Show is an American television situation comedy starring Bill Cosby as CLIFF HUXTABLE, which aired for eight seasons on NBC from September 20, 1984 until April 30, 1992. The show focuses on the Huxtable family, an affluent African-American family living in Brooklyn, New York. 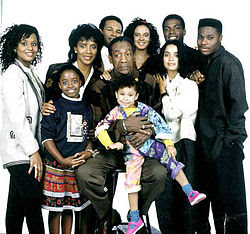 According to TV Guide, the show "was TV's biggest hit in the 1980s, and almost single-handedly revived the sitcom genre and NBC's ratings fortunes".

Originally, the show had been pitched to ABC, which rejected it.
Entertainment Weekly stated that The Cosby Show helped to make possible a larger variety of shows based on African Americans, from In Living Color to The Fresh Prince of Bel-Air.(pictured) 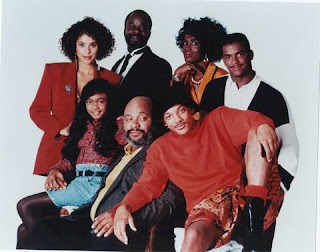 The Cosby Show was also one of the first successful sitcoms based on the subject matter of a standup comedian’s act, blazing a trail for other programs such as Seinfeld, Ellen, Roseanne, Home Improvement, The Drew Carey Show, and Everybody Loves Raymond. The show spawned the spin-off A Different World, which ran for six seasons from 1987 to 1993.

Gomez Addams is the fictional patriarch of The Addams Family, created by cartoonist Charles Addams for The New Yorker magazine in the 1930s.

Family Ties is an American sitcom that aired on NBC for seven seasons, from 1982 to 1989. The sitcom reflected the move in the United States from the cultural liberalism of the 1960s and 1970s to the conservatism of the 1980s. 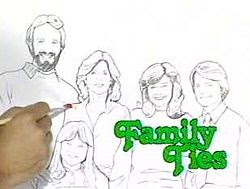 The Dick Van Dyke Show is an American television sitcom that initially aired on CBS from October 3, 1961, until June 1, 1966. The show was created by Carl Reiner and starred Dick Van Dyke and Mary Tyler Moore. It was produced by Reiner with Bill Persky and Sam Denoff. The music for the show's theme song was written by Earle Hagen.

A three-camera/studio audience format was used during production.


My Two Dads is an American sitcom that starred Staci Keanan, Paul Reiser and Greg Evigan. It aired on NBC from 1987 to 1990 and was produced by Michael Jacobs Productions in association with TriStar Television (later Columbia Pictures Television) and distributed by TeleVentures.

Paul Lynde and Dick Van Dyke sing about the age old question parents have been asking for years from Bye Bye Birdie.

My Three Sons is an American situation comedy about a Scots-Irish-American family (Douglas/O'Casey). The series ran from 1960 to 1965 on ABC, and moved to CBS until its end on August 24, 1972. My Three Sons chronicles the life of a widower and aeronautical engineer named Steven Douglas (Fred MacMurray), raising his three sons. 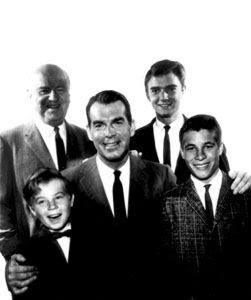 Sheriff Andrew "Andy" Jackson Taylor is the principal character on The Andy Griffith Show, an American sitcom which aired on CBS, (1960–1968). The character made a few appearances in the show's spinoff Mayberry R.F.D. (1968–1971) and appeared in a reunion telemovie Return to Mayberry (1986). The character made his initial appearance in an episode of The Danny Thomas Show (February 1960).

Andy Taylor appeared in all 249 episodes of The Andy Griffith Show and was played by comedian and actor Andy Griffith.

Charles Phillip Ingalls (January 10, 1836 – June 8, 1902)(same birthday as my dad!) was the father of Laura Ingalls Wilder, known for her Little House on the Prairie series of books. Ingalls is depicted as the character "Pa" in the series. 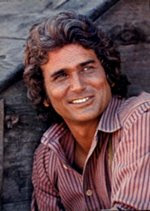 Little House on the Prairie is an American Western drama television series, starring Michael Landon and Melissa Gilbert, about a family living on a farm in Walnut Grove, Minnesota in the 1870s and 1880s. The show was an adaptation of Laura Ingalls Wilder's best-selling series of Little House books. Television producer and NBC executive Ed Friendly became aware of this enduring story in the early 1970s. He asked Michael Landon to direct the pilot movie, who agreed on the condition that he could also play Charles Ingalls.
The regular series was preceded by a two-hour pilot movie that first aired on March 30, 1974. The series began on the NBC network on September 11, 1974, and ended on May 10, 1982. During the 1982-83 television season, with the departure of Michael Landon and Karen Grassle, the series was broadcast with the new title Little House: A New Beginning.


Atticus Finch is a fictional character in Harper Lee's Pulitzer Prize-winning novel To Kill a Mockingbird. Atticus is a lawyer and resident of the fictional Maycomb County, Alabama, and the father of Jeremy Atticus "Jem" Finch and Jean Louise "Scout" Finch. Atticus is a central character in the novel. In 2003, Atticus Finch, as portrayed by Gregory Peck in the 1962 film adaptation, was voted by the American Film Institute to be the greatest hero in American film. 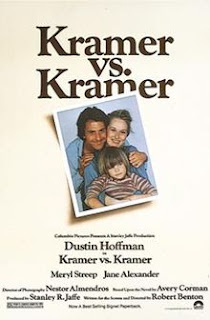 The Waltons is an American television series created by Earl Hamner, Jr., based on his book Spencer's Mountain, and a 1963 film of the same name. The show centered on the titular family growing up in a rural Virginia community during the Great Depression and World War II. The series pilot was a television movie entitled The Homecoming: A Christmas Story, broadcast in 1971. The show originally aired on CBS from 1972 to 1981. After the series left the air, three television movie sequels were broadcast in 1982, with three more following in the 1990s.The Waltons was produced by Lorimar Productions and distributed by Warner Bros. Domestic Television Distribution in syndication. Ralph Waite played Father John Walton


Father Knows Best is an American radio and television comedy series which portrayed middle class family life in the Midwest. It was created by writer Ed James in the 1940s.
The May 27, 1954 episode of The Ford Television Theatre show was called "Keep It in the Family". This 26-minute episode stars Robert Young as Tim Warren, head of the Warren Family. With him was wife Grace (Ellen Drew), older daughter Peggy (Sally Fraser), younger daughter Patty (Tina Thompson) and son Jeff (Gordon Gerbert). This is considered to be the pilot of Father Knows Best. In the episode, Peggy dreams of making it as an actress but a talent scout who has raised her hopes just wants people for his acting school. 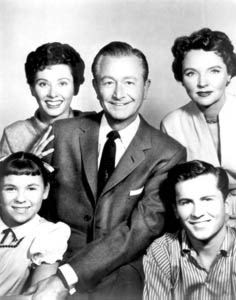 Father Knows Best is perhaps more important for what it has come to represent than for what it actually was. In essence, the series was one of a slew of middle-class family sitcoms in which moms were moms, kids were kids, and fathers knew best. Today, many critics view it, at best, as high camp fun, and, at worst, as part of what critic David Marc once labeled the "Aryan melodramas" of the 1950s and 1960s.

Well, I thank God for these images. They are all part of what has shaped all of us, both good and bad. The same can be said of our dads. I hope your favorite "cultural" dads were included here. If not, perhaps next year! Now, go out and do something special with your dad today! It's time for me to go out and be a dad as well!

Tomorrow's blog will be a tribute to Broadway Sings For Pride,Jacqueline Jonee, and Terri White!

Posted by RichardSkipper at 10:44 AM