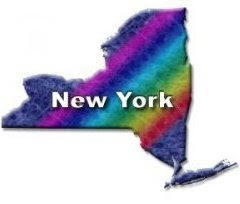 " The main dangers in this life are the people who want to change everything-or nothing."
-Viscountess Nancy Aster, American-born British politician (1879-1964) 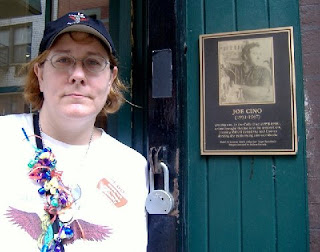 
Happy Monday!
I hope you ALL had a wonderful weekend and those of you who celebrated PRIDE this weekend did so responsibly and in a fashion that we ALL can be proud of. This is a great time to be in New York. New York stands to gain over $180 MILLION for their support of Marriage Equality. Not a bad deal. EQUALITY IS GOOD BUSINESS!!! 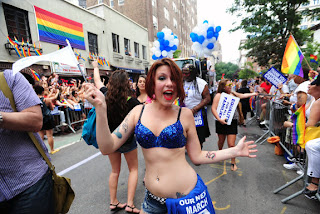 (Crowds gathered for the 42nd Annual LGBT Pride March on Christopher Street in the West Village on Sunday, June 26. New York City's annual Pride March began in 1970 as a commemoration of the one-year anniversary of the Stonewall Riots. The March has since grown to become the oldest and one of the world's largest Lesbian, Gay, Bisexual and Transgender (LGBT) events.


My horoscope this morning reads, " Your faith in humankind starts with your faith in those closest to you.
Loved ones will be supportive and will go out of their way to help you.
You'll know the love of a good family."
The timing of this could not be better right now! I am truly reminded of who my "family" is by the actions of those in my circle over the past 72 hours.
When I first came to New York, there was a "I LOVE NEW YORK" ad campaign. I think the time has come to re-visit that campaign and somehow bring it back!
The legislative session this year ended a week late, but it ended in extraordinary fashion: A property-tax cap and legalizing same-sex marriage were adopted on the same day!
In his first six months in office, the DEMOCRATIC governor scored victories on ALL of his legislative priorities, a remarkable feat at a state Capitol legendary for its rigidity.
With his soaring popularity, Cuomo used a mix of hospitality, cajoling and a stern focus on his priorities to move a reluctant Legislature into adopting measures that had literally been collecting dust for decades.
Thank you, Governor Cuomo for being a STAND-UP person in a SIT-DOWN world!
So, all of my New York friends, celebrate and support all that New York has to offer! To all of my non-New York friends! Come to New York! There is SO MUCH GOING ON RIGHT NOW! NY, THE EQUALITY STATE! 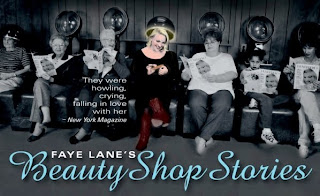 (regular price - $30)
Click here to buy your DISCOUNT tickets now!
and enter code FAYEB
or use code FAYEB at (212) 691-1555
or the box office
Everyone loves Faye Lane's Beauty Shop Stories!

The Villager says that Faye "is on her way to becoming a bit of a legend."

AOL's City's Best has a wonderful interview with Faye! She's a "Texas rose that keeps on rising." 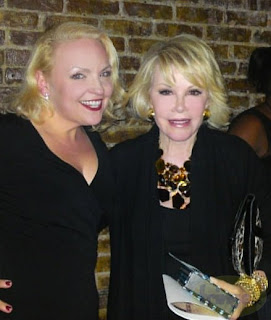 Nitelifeexchange.com gushes: "in an ideal world, she and the show would win an award every day for the rest of her natural life."


Joan saw the show last summer and loved it!

She laughed, she cried, she let Faye touch her girdle!

Read the TheaterLife.com review! "A little show with a big heart, “Faye Lane’s Beauty Shop Stories” is an irresistible treat."

D Magazine gives the show a great review! "fabulous and chic in black dress and cowboy boots, [Faye] still has the sparkly eyes of that precocious little girl in her bedazzled Burger King crown"

For more information about Faye and the show, visit
www.beautyshopstories.com

Become a fan:
facebook.com/beautyshopstories
I am a fan!

And I cannot wait to celebrate my 32nd anniversary of coming to NY on August 5th! If you would like to join my celebration, please let me know!

Another entertainer I love is not in New York. But she is a New Yorker born and bred in the Bronx. Linda Kosut! 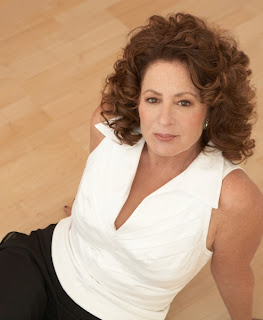 Award-winning vocalist Linda Kosut blends cabaret and jazz styles into sparkling and exciting renditions of songs of differing genres. Don Heckman, International Review of Music and jazz critic to the Los Angeles Times says of Linda “ [this] amazing Bay Area canary brings her skills as an actress to her insightful interpretations of songs underscored with a fusion of jazz, pop and folk.” Linda has performed to full houses at New York’s Iridium Jazz Club to San Francisco’s Yoshi’s and The Rrazz Room.
Growing up in New York City and transplanted to San Francisco over 20 years ago, Linda only began pursuing her dream of performing several years ago as she approached “boomer” status, and she has not stopped since. “I am sure that I am not alone in my journey to satisfy a creative bug I’ve had my whole life; but one that up until nearing ‘retirement’ status, I did not pursue,” says Linda. “The joy I have in performing translates to my audience who tell me how I have inspired them. It is my sheer pleasure to do so.”Linda Kosut performs "Summer In the City" with Norman Curtis at the piano, Max Perkoff on trombone, Tom Hubbard, bass and Scott Latzky, drums in NYC, June 1, 2007. Norman co-wrote this song with Oscar Brown Jr.
Go see Linda if you get the opportunity!

I still cannot believe Alice Playten has passed away. Here is another look at this amazing talent:


I am putting this here for no other reason than entertainment value:

Betty White did "HELLO, DOLLY!" with The Kenley Players in August of 1979. 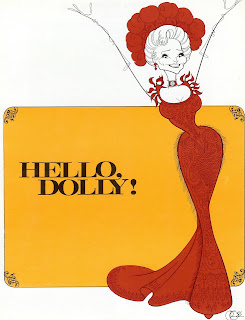