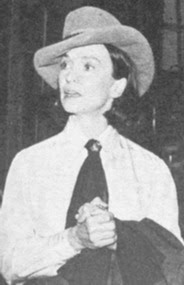 Eminem said " Lose yourself in the Field, the moment you own it, you better never let it go..you only got one shot, don't miss the chance to blow, cus opportunity comes once in a lifetime !!

Happy Tuesday!
Today is the birthday of Helen Gallagher! I was told this last week by my dear friend, Stephanie Zagoren, who studies with Helen. I said thank you for giving me the subject of my Sunday blog! Wikipedia is the source of this blog!
For those of you who do not know, Helen Gallagher (born July 19, 1926) is an American actress, dancer, singer and makeup artist. She was born in New York City of Irish, French, and English descent.


Born in Brooklyn, she was raised in Scarsdale, New York for several years until the Wall Street crash which heralded the Great Depression, and her family moved to the Bronx. Her parents separated and she was raised with an aunt. She suffered from asthma.

Gallagher was known for decades as a Broadway performer. She appeared in Make a Wish, Hazel Flagg, Portofino, High Button Shoes, Sweet Charity, and Cry for Us All. Multi-talented, but fiery, Gallagher once reportedly kicked an actor (who tried to upstage her) into the orchestra pit, according to Merv Griffin, who once appeared in Finian's Rainbow on Broadway with her.

Stephen Cole says, "Sounds like a Reno should sound!" 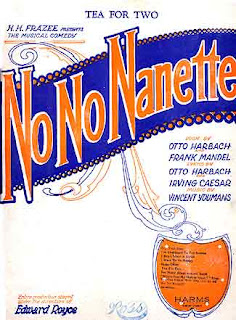 Gallagher's first starring role on Broadway came in 1953 as title character Hazel Flagg, based on the 1937 Carole Lombard movie Nothing Sacred. The role earned her a feature photo shoot for Life magazine.

According to Andrew Martin, "One of the most singular thrills ever felt by an audience was at Arthur Siegel's memorial, when Helen closed the event by singing "You Need a Lift," one of her standout numbers from her off-Broadway hit "Tallulah," written by Siegel with Tony Lang."

Gallagher appeared in the 1977 movie Roseland opposite Christopher Walken.

An aficionada of Rodgers and Hammerstein, she appeared on a special tribute to Richard Rodgers on The Bell Telephone Hour.


In the last scene when Maeve (Helen Gallagher) is singing Danny Boy, Helen Gallagher started to break down during the scene and improvised the bit about asking everybody else to sing with her. If you look closely at the crowd many of the actors have trouble singing because they don't know the words to the song! After Ryan's Hope was canceled, the Ryan's pub set was given to ABC's One Life to Live where it was used for another few years.

Despite her extensive work on Broadway, she is perhaps best known as the gentle Irish American matriarch, Maeve Ryan, on the soap opera Ryan's Hope, a role she played for the show's entire duration, from 1975 to 1989. Creator and head writer Claire Labine had much affection for the character of Maeve, and as such, focused much loving care and attention in crafting her development. As a result, Gallagher's motherly character quickly came to be portrayed as the heart and soul of the show. She was nominated for five Daytime Emmy Awards for her work on the serial, winning in 1976, 1977, and 1988.

At the time she was cast in Ryan's Hope, Gallagher taught singing in her home three times a week. Michael Hawkins, who would play the first Frank Ryan, was one of her students. 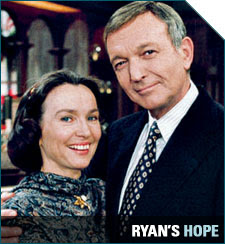 As the show progressed further into the 1980s, the ratings took a steep slide. When ABC executives decided to cancel Ryan's Hope, Claire Labine decided to end the final episode with Maeve at the family bar, Ryan's, singing her favorite tune, Danny Boy. Since the cancellation of Ryan's Hope, Gallagher has appeared in All My Children and One Life to Live and in various Off-Broadway productions, although she considers herself in "semi-retirement." She currently is on the faculty of HB Studio in New York City.


In 1984, Gallagher starred in the title role of Tallulah, a musical stage biography of actress Tallulah Bankhead. 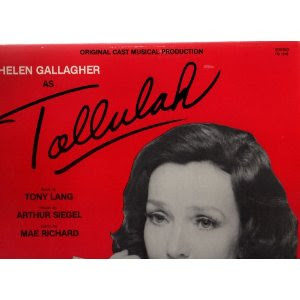 She also appeared in Billion Dollar Baby.Billion Dollar Baby is a musical set on Staten Island and in Atlantic City during the late 1920s. It follows the adventures of an ambitious young woman, Maribelle Jones, in her quest for wealth during the Prohibition era. Betty Comden and Adolph Green, fresh from their success with On the Town, wrote the book and lyrics; Morton Gould provided the score. Indeed, the production team was something of an On the Town reunion: once again, George Abbott directed and Jerome Robbins choreographed. 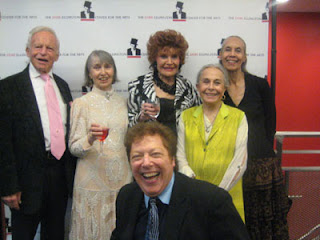 06-14-11 (L-R) Erwin Drake. Helen Gallagher. Edith Drake. Marge Champion. Carmen De Lavallade. (in front) Robert Blume at a reception at the 1st Annual Duke Ellington "Beyond Category" Award which was presented to legendary dancer/choreographer Donald Saddler at Merkin Concert Hall. 129 West 67th St.
Monday night 06-13-11 I LOVE THIS PICTURE! Most depicted here are my friends. Helen Gallagher is the ONLY one I don't know personally! ON THE TOWN WITH AUBREY REUBEN

Helen Gallagher was also in the original Broadway cast of Brigadoon!Brigadoon, of course, is a musical with a book and lyrics by Alan Jay Lerner and music by Frederick Loewe. Songs from the musical, such as "Almost Like Being in Love" have become standards. 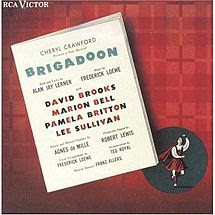 I received the following testimonial from Sigali Hamberger, who I have written about in previous blogs, "Helen is an amazing woman, who has touched so many lives, not only with her triple-threat talent, but also with her love and support as a teacher. Sometimes it’s tough love, but it always comes from a place of support and encouragement. As far as I know, she’s been teaching for 40 years. And despite her performing schedule she always made her students a priority--so much so, that she didn’t break from teaching during the years that she was on Ryan’s Hope, or since then, when she has been involved in productions. She continues to teach classes at HB and privately, and I am happy to report that she still has more energy in her little pinky than most of us. I am very grateful to have her as a friend and a mentor. And to think, it all happened randomly when I walked into her class one Tuesday afternoon, when I was new to the city and new to singing. Lucky, lucky me! I believe I speak for many other students who have been, and continue to be encouraged and inspired by her example.

Sigali is an incredible performance and can next be seen August 4th at 7:00pm at the Metropolitan Room. Check out her website for details.

Thank you, Helen! Here's to the next chapter in your life! 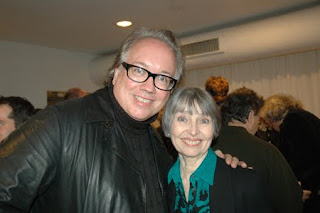 Tomorrow's blog will be a celebration of Craig Pomranz

Posted by RichardSkipper at 7:15 PM