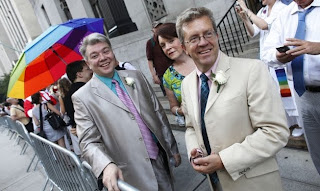 "Though it may not be anyone's birthday,
And though it's far from the first of the year,
I know that this very minute has HISTORY in it, we're here!!"
Jerry Herman

Happy Sunday!
Today the first wave of gay marriages are happening in New York State. I'm proud to be a New Yorker! 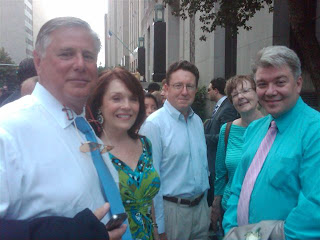 It's official! Dan Sherman and I are married in New York! It is one of those days that I never thought I would see in my lifetime. 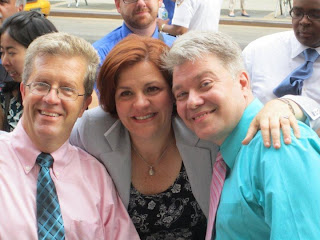 I also want to publicly acknowledge how incredible EVERYONE was at City Hall and how efficiently everything ran. There were close to 800 couples and it ran like clockwork. I want to thank Christine Quinn for ALWAYS looking after ALL New Yorkers and doing it with CLASS and DIGNITY! 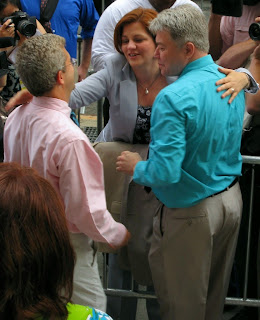 I was able to tell her today how much I love her and how much she means to me. I also want to mention Sen. Ruben Diaz Sr. You are a vile human being with your bigotry and hatred for many people. It will be remembered as election time comes around. Thanks for your (lack of) support. For those of you who do not know, Diaz was the ONLY Democrat to VOTE AGAINST Marriage Equality for ALL New Yorkers! Check out this slide show from The New York Times.

I'm very tired so I am throwing this together before dinner and off to bed! 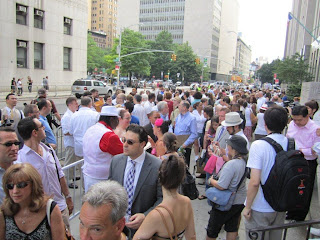 I'm 50. Danny and I have been together 50 years together! 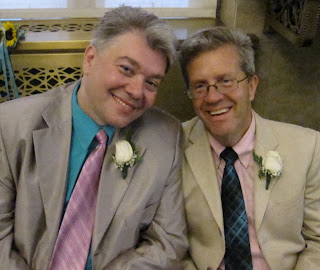 I felt so much love today from my friends and from EVERYONE that I encountered today! This is the model for what EVERY DAY Should be. Our friends Tom and Leslie Orofino surprised us this morning by picking us up at 6:30 and driving us into the city and were there for us!

Leslie called me on Friday to see if I had thought about entering into the lottery to get married. I told her that not only had I thought about it but that I HAD entered it and that we were selected and that we were getting married this morning! She screamed and said she wanted to be there. I told her that we were asked to start lining up at 7: 30 and that I didn't know what time we would be getting in. She said, "We don't care! We want to be there for you!"
At 5:30 this morning, she called to say that they were picking us up at 6:30 to be ready!

Not only did she and Tom pick us up at 6:30, they had flowers for our lapels! Talk about friends! We had already asked Pat & Joe Sopiak to be our witnesses. We were their witnesses when they got married 19 years ago! (It was just the four of us at that time and a Justice Of The Peace. 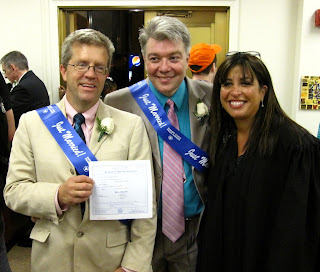 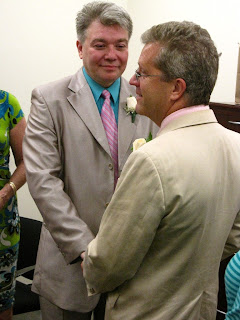 So Tom, Leslie, Danny, and myself were off to the races at 6:30 this morning! Because of the early hour, there was no traffic and we were already at City Hall by 7:15! We were not far from the first of the line!Lenny Babbish and his partner Sol showed up shortly after that and then Terri White and her partner, Donna Barnett. 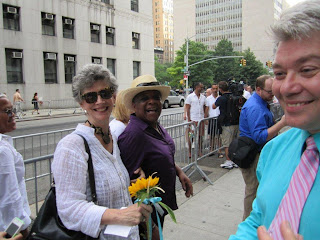 And the crowds started showing up! There was so much happiness, it felt like a huge party. Oppression was over!
Couples cheered by supporters began marrying today in New York City on the first day same-sex weddings became legal in the Empire State, marking a pivotal moment in the national drive for recognition. 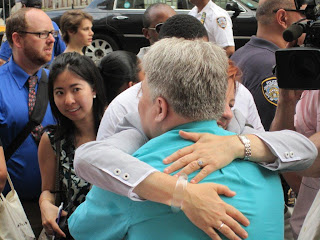 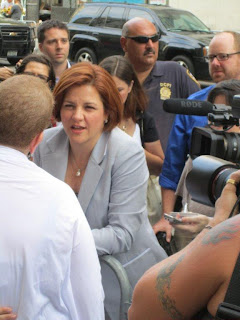 LOVE IS IN THE AIR!
From New York City to Niagara Falls, N.Y., hundreds of gay and lesbian couples across the state began marrying on Sunday — the first taking their vows just after midnight — in the culmination of a long battle in the Legislature and a new milestone for gay rights advocates seeking to legalize same-sex marriage across the nation. 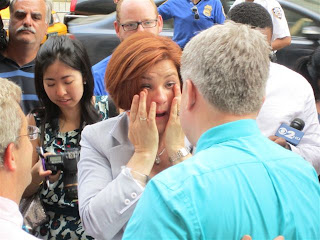 Couples began exchanging vows at midnight from Niagara Falls to Long Island, though the center of the action was in New York City, where officials expected to host hundreds of same-sex weddings throughout the day. About 100 couples waited in line on a sweltering morning in Manhattan for the chance to exchange vows at the city clerk's office. WE WERE PART OF THIS HISTORIC HAPPENING! 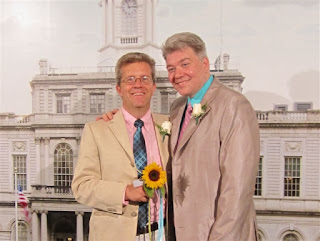 And tonight we have been seen nationally. I was even told that I was seen in France!

Some people waiting to wed clutched bouquets and wore tuxedos or wedding dresses before they were ushered into the clerk's office for a license and a ceremony in one of the building's simple chapels.

The first couple to marry in Manhattan were Phyllis Siegel, 76, and Connie Kopelov, 84, who have been together for 23 years. Kopelov arrived in a wheelchair and stood with the assistance of a walker. During the service, Siegel wrapped her hand in Kopelov's hand and they both grasped the walker. 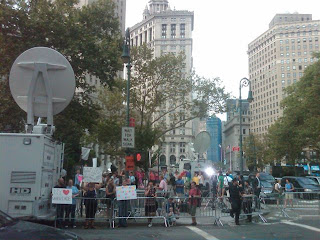 Witnesses cheered and wiped away tears after the two women vowed to "honor and cherish" each other as spouses and then kissed. 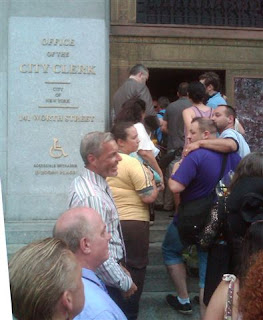 Thank you ALL who have supported Danny and I through your friendship and LOVE and thank you Tom and Leslie and Pat and Joe for sharing in this special day with us!Thanks for being a loyal reader of my Blog!

TELL THE ONES THAT YOU LOVE THAT YOU LOVE THEM TODAY!! Create new memories!
Become A Facebook friend of mine!
Follow me on Twitter
If you've seen one of my appearances/shows, add your thoughts to my guestbook at www.RichardSkipper.com

Posted by RichardSkipper at 8:00 PM