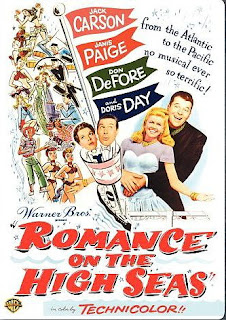 " Run, run, run... When you see a pretty woman."
Jack Carson as Peter Virgil in Romance On The High Seas

Happy Monday,
I'm wrapping up a busy day with a good old fashioned musical on TCM. This film is most notable for being the feature film debut of Doris Day.

Doris Day, the quintessential all-American girl, continues to be revered by her fans, while the media still celebrate her as an actress and singer with a legendary Hollywood "girl next door" image.
She shot straight to the top! And why not? She was gorgeous, she was funny, and, boy could she sing! Romance On The High Seas also introduced It's Magic. A big hit for Doris.Also, in this film was Janis Paige. Interestingly enough, years later, Janis Paige would have a huge Broadway success as "Babe" Williams in The Pajama Game. When it was made into a movie, an interesting thing happened...at least in Broadway to Hollywood transfers; practically the entire film went west to do the film! Everyone, that is, except the leading lady! She was replaced by, guess who, Doris Day! That's Hollywood...or at least some form of show business.
Years later, they would appear together again in PLEASE DON'T EAT THE DAISIES! 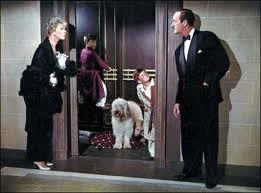 This blog is a celebration of these two great "Babes", Doris Day and Janis Paige. 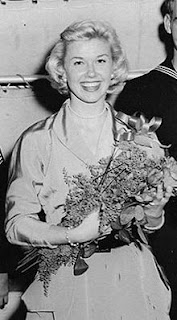 Another Hollywood Blonde was supposed to play the Doris Day role in Romance... Betty Hutton! 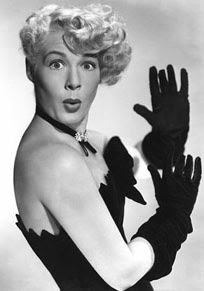 Betty was too busy with Dream Girl when Romance On The High Seas was offered to her; two years later in 1950, she had her last big opportunity taking over from an ailing Judy Garland as Annie Oakley in Annie Get Your Gun.

Betty Hutton's star, unfortunately, did not continue to rise after taking over for Judy Garland in Annie Get Your Gun. Her singing voice, at one point sweet and mellow in its softer moments, eventually burnt out through perpetual belting: at her London Palladium engagements, despite some fairly sensational trapeze work she had learned for Cecil B. DeMille's The Greatest Show On Earth in 1952, a distressing story was printed in a Sunday newspaper that her singing was "ghosted" by one of the group accompanying her on stage. 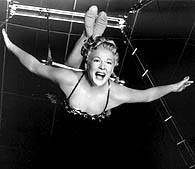 Once again, Romance on the High Seas (also known in the United Kingdom as It's Magic) is a 1948 Technicolor musical romantic comedy film starring Jack Carson, 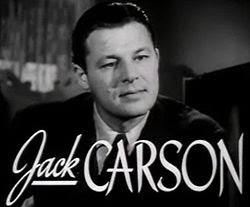 Janis Paige (born as Donna Mae Tjaden, September 16, 1922, Tacoma, Washington) is an American film, musical theatre and television actress. She began singing in public from the age of five in local amateur shows. She then moved to Los Angeles after graduating from high school and then got a job as a singer at the Hollywood Canteen during World War II. 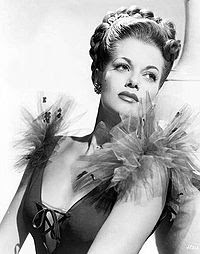 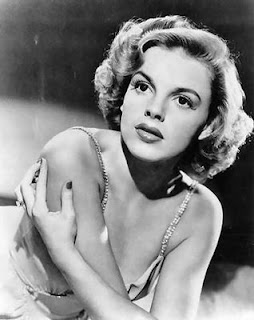 Other established stars like Judy Garland and Jane Powell were briefly considered before Michael Curtiz was talked in to auditioning Doris Day, a well known vocalist, but hitherto not considered an actress (despite some early appearances in 1940–1941 in a number of soundies). (Which went to Number one on this date in 1945! July 17th, 1945)
Her personal life was in some turmoil at the time, as her second marriage to musician George Weidler was ending, and this combined with her evident nervousness, led her to deliver a notably teary, emotive version of Embraceable You at the audition. Impressed by her singing ability, and fresh-faced good looks Curtiz signed her to a film contract and cast her in the leading role of Georgia Garrett.
Despite the change in star and the late casting of Janis Paige, the film was financially successful.
However, much of the dialogue and pacing (as well as the costuming, and delivery of the songs) suggests the origins of the role as a Huttonesque style heroine. This type of heroine would be more in line with the roles that Day would play later in the 1960s than the "girl next door" roles that would follow shortly after and make her famous in the early 1950s. 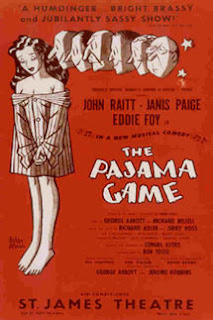 6 years later, The Pajama Game would open on Broadway. The Pajama Game is a musical based on the novel 7½ Cents by Richard Bissell. It features a score by Richard Adler and Jerry Ross. The story deals with labor troubles in a pajama factory, where worker demands for a seven-and-a-half cents raise are going unheeded. In the midst of this ordeal, love blossoms between Babe, the grievance committee head, and Sid, the new factory superintendent.

The original Broadway production opened on May 13, 1954, and ran for 1,063 performances. It was revived in 1973, and again in 2006 by The Roundabout Theatre Company. The original production won a Tony for Best Musical, and the 2006 Broadway revival won a Tony Award for Best Revival of a Musical. The musical is a popular choice for community and school group productions. 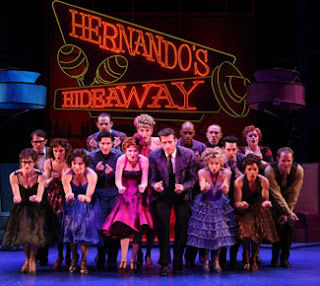 Sid Sorokin, the handsome new factory superintendent who falls in love with Babe, despite their being on opposite sides of the labor dispute central to the plot. 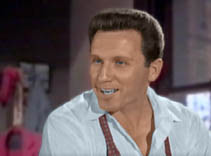 Catherine "Babe" Williams, the leader of the Union Grievance Committee, who in turn falls in love with Sid.

Thank you both for the gifts you have given us and continue to give!

Posted by RichardSkipper at 10:55 PM