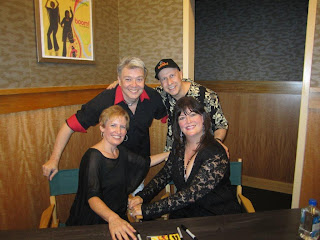 Happy Thursday!
July 21 is the 202nd day of the year (203rd in leap years) in the Gregorian calendar. There are 163 days remaining until the end of the year.
I'm a lucky guy!
I love GOOD music and I get to immerse myself in it on an ongoing level.
As I wrote in my blog yesterday, I attended the cd signing and performance of Ann Hampton and Liz Callaway's BOOM at Barnes and Noble produced by Steven Sorrentino. It was a well attended event and I can count the number of people that I knew on one hand. That is both good and bad. Great because I love sitting in an audience with complete strangers and drinking in how they are experiencing the same event that I am. Are we in synch with each other? Are we laughing, crying, or reacting to certain things in the same way or are we at complete odds with each other.
This may be a strange thing to say, but I don't think audiences today are being sold the same bill of goods as previous audiences. Stephen Sondheim says every show gets a standing ovation today because audiences have spent a lot of money and they are trying to convince themselves that they got their monies worth.

I found a great blog this morning from Jason Cochran on standing ovations.

The louder some "performers" screech or see how many syllables they can fit into a one syllable word, the louder and bigger the ovation! I received a youtube clip from a mom last week asking me what I thought of her daughter's singing. I was brutally honest with her. I told her it was obvious that the daughter could sing, but drop the schtick!
There were so many gymnastic things happening around the notes that it got in the way and was too much of a distraction. She said her daughter's coach was teaching her this. I told her to get a new "coach"!

I have often said that I think MTV is the greatest downfall in the history of entertainment.
Disjointed images to sell a song is not my cup of tea.
I also feel that American Idol where you have to fit into "their" idea of what you should sound like has taken away from originality. I also feel, and I KNOW that I'm in the minority here, that GLEE is feeding into that. From what I've seen, the performers are more interested in what they sound like and how high they can go rather than singing the lyrics!
What happened to ORIGINALITY in this business: the Carol Channings, Ethel Mermans, Mary Martins, Gwen Verdons, Yul Brynner's? How many of them would make it in this "business" today?
Chita Rivera says you can take any production number from any Broadway show today and change the costumes and plop it into another show, and the audiences would not know the difference!
Fosse, Robbins, deMille, Bennett, Michael Kidd...they ALL had a very distinct STYLE that they were known for. At one point, there were dance teachers who specialized in the style of these performers. When they had a new show and the casting notices went out, students would flock to these teachers to be up on the auditions.

I miss the days when you would audition in a THEATRE on a REAL STAGE for the CREATIVE TEAM rather than auditioning in a studio the size of a shoe box for interns to the casting director who have no interest in you whatsoever. I want the show business that was about ENTERTAINMENT back! It DID exist at one time!

When I see GREAT singers who are interested in singing the lyrics with respect to what the songwriters envisioned...with their own STYLE, I can't explain it; it THRILLS ME!! A microphone (or not), great musicians, and great singers...no gimmicks like pyro-technology and or CONSTANT MOVEMENT from whirling dervishes (which passes for choreography today). For God's sake, sing the songs! If you are too busy trying to impress me, you're not connected to the material and therefore you've lost me. Just sing, If I'm impressed, I'm impressed. Listen to this: THIS is exactly what I'm talking about! Today is Norman Jewison's Birthday. The television production that proved pivotal to Jewison's career was the Judy Garland "comeback" special that aired in 1961, which included Frank Sinatra and Dean Martin, and led to a weekly show that Jewison was later called in to direct. Look at the comment that follows this clip on YouTube! I am not alone in my feelings! "Notice there isn't any glitz or glam behind them or around them while they sing. Their combined voices are the show. Today everything is fast or﻿ faster, loud or louder. I'm a #1 fan of rock music, but there is just something about hearing voices blend together to make music that makes my heart sing.
There is no need for anything else to make this one of the best videos I've seen in a long time! Simple is better."

THAT'S why I get excited about great singers like Ann and Liz and great arrangers like Alex Rybeck. Buy BOOM! You'll see what I mean.

Today is the birthday of Kay Starr who is 89! 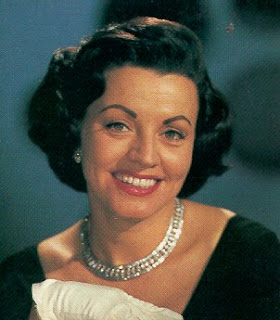 Kay Starr (born July 21, 1922) is an American pop and jazz singer who enjoyed considerable success in the 1950s. She is best remembered for introducing two songs that became #1 hits in the 1950s, "Wheel of Fortune" and "The Rock And Roll Waltz".

She was born Katherine Laverne Starks on a reservation in Dougherty, Oklahoma.
Her father, Harry, was a full-blooded Iroquois Indian; her mother, Annie, was of mixed Irish and American Indian heritage. 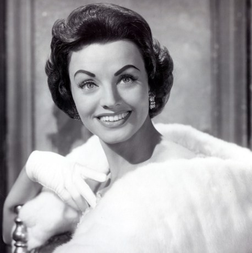 When her father got a job installing water sprinkler systems for the Automatical Sprinkler Company, the family moved to Dallas, Texas. There, her mother raised chickens, whom Kay used to serenade in the coop. Kay's aunt Nora was impressed by her 7-year-old niece's singing and arranged for her to sing on a Dallas radio station, WRR. First she took a talent competition by storm, finishing 3rd one week and placing first every week thereafter. Eventually she had her own 15-minute show.
She sang pop and "hillbilly" songs with a piano accompaniment.
By age 10 she was making $3 a night, which was quite a salary in the Depression days.

Take Kay Starr Home With You!

When Starks' father changed jobs, the family moved to Memphis, Tennessee, where she continued performing on the radio. She sang "Western swing music," still mostly a mix of country and pop. During this time at Memphis radio station WMPS, misspellings in her fan mail inspired her and her parents to change her name to 'Kay Starr.'


Check out this BLOG about Kay Starr!


At 15, she was chosen to sing with the Joe Venuti orchestra. Venuti had a contract to play in the Peabody Hotel in Memphis which called for his band to feature a girl singer, which he did not have. Venuti's road manager heard Kay Starr on the radio and suggested her to Venuti. She was still in junior high school and her parents insisted on a midnight curfew.

Although she had brief stints in 1939 with Bob Crosby and Glenn Miller (who hired her in July of that year when his regular singer, Marion Hutton, was sick), she spent most of her next few years with Venuti, until he dissolved his band in 1942. It was, however, with Miller that she cut her first record: "Baby Me"/"Love with a Capital You." It was not a great success, in part because the band played in a key more appropriate for Marion Hutton that, unfortunately, did not suit Kay's vocal range.

After finishing high school, she moved to Los Angeles and signed with Wingy Manone's band; then from 1943 to 1945 she sang with Charlie Barnet's band. She then retired for a year because she developed pneumonia and later developed nodes on her vocal cords, and lost her voice as a result of fatigue and overwork.

In 1946 she became a soloist, and in 1947 signed a solo contract with Capitol Records. Capitol had a number of other female singers signed up (such as Peggy Lee) Ella Mae Morse, Jo Stafford, and Margaret Whiting), so it was hard to find her a niche. In 1948 when the American Federation of Musicians was threatening a strike, Capitol wanted to have all its singers record a lot of songs for future release. Since she was junior to all these other artists, every song she wanted to sing got offered to all the others, leaving her a list of old songs from earlier in the century, which nobody else wanted to record.

I am putting this here just for the fun of it!

As I was digging around this afternoon continuing from where I left off yesterday in my blog continuing with the music of my life in celebration of BOOM!, I came across a little gem that should fill today’s gap quite nicely – “If You Really Want Me To, I’ll Go,” a 1965 release on the Smash label by a duo called the Ron-Dels.Delbert McClinton was part of this group and he wrote the song. He is more country oriented these days, or at least over the past several years. Worked with Tanya Tucker a bit.

What was Number One?

On this date in 1967, The Grateful Dead were appearing at The Continental Ballroom!


WIKIPEDIA is a major source of this blog!

Tomorrow's blog will be a celebration of Peggy Lee and JeanneMacDonald (who is doing a tribute to Peggy Lee tomorrow night in New Hope, Pennsylvania at Bob Egan's New Hope! Hope you are part of it!!