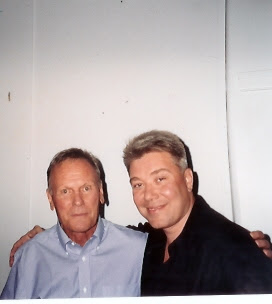 A lot has been written about Tony Perkins and myself and I figured, Let's get it straight. I had a relationship with Tony for two to three years, but those are only threads in the tapestry of my whole life.
Tab Hunter

I met Tab in 2005 when his book came out, Tab Hunter, Confidential : The Making Of A Movie Star by Tab Hunter and Eddie Muller. 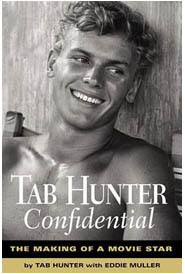 He did an interview at The Gay and Lesbian Center! Boy, had times changed in his life.
I was so excited to meet him! I had had a crush on him ever since I saw him as Joe Hardy in Damn Yankees. OK, That is my confessional today! Still have a crush on him! It was great to meet someone from afar and have them meet up to the ideal! He was gracious and charming and wonderful!
"Welcome to Hollywood, circa 1950, the end of the Golden Age. When Tab Hunter takes his shirt off young hearts beat faster, because he is the picture of innocence and trust and need, he will become a star." 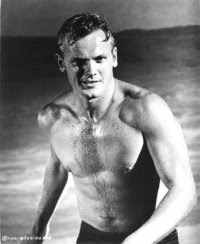 "The open smile says, 'You will love me', and soon the whole world does.
Stardom didn't come overnight, although it seemed that way. 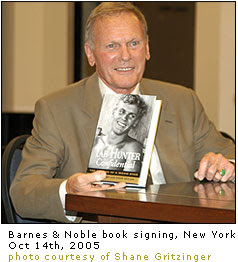 Tab Hunter was a true product of Hollywood, a movie star created from a stable boy, a shy kid made EVEN more so by the way his schoolmates-both girls and boys- reacted to his beauty, by a mother who provided for him in every way except emotionally, and by a secret that both tormented him and propelled him forward. 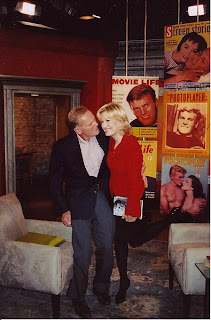 (Tab and Diane Sawyer on the set of GOOD MORNING AMERICA)

In Tab Hunter, Confidential : The Making Of A Movie Star, Hunter spoke out for the first time about what it was like to be a movie star at the end of the big studio era, to be treated like a commodity, to be told what to do, how to behave, whom to be seen with, what to wear.

Tab Hunter Confidential:
The Making of a Movie Star
by Tab Hunter, with Eddie Muller

When he dared to be different, to complain to the studio about the string of mostly mediocre movies that were assigned to him, he learned that just like any manufactured product, he was disposable-disposable and replaceable.

All the things that happen to people in the industry today, the actors, what they have to put up with, all the people wanting to know every single moment of their lives - I think it's really sad.
Tab Hunter 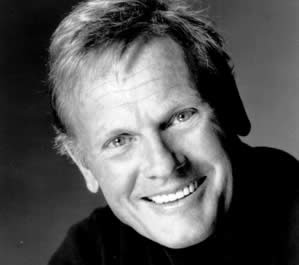 Hunter's career as a bona fide movie star lasted a decade.
Tab Hunter Confidential is at heart a story of survival-of the giddy highs of stardom, and the soul destroying lows when phone calls begin to go unreturned; of the need to be loved, and the fear of being consumed; of the hope of an innocent boy, and the rueful summation of a man who did it all, and who lived to tell it all.

TAB HUNTER, a star of screen, stage, and television, has appeared in more than fifty films including Damn Yankees 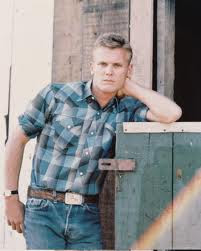 Take Tab home with you! 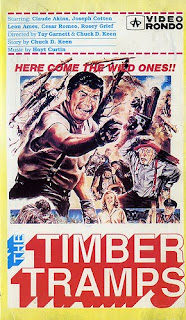 Polyester, and Lust In The Dust.

EDDIE MULLER is an authority on film noir and is the author of Dark City Dames and two other books on the subject, as well as two mystery novels, The Distance and Shadow Boxer.

Hollywood cools, and when it cools you have to go to where the work is. I ran off to Italy to do spaghetti westerns.
Tab Hunter

Tab's book begins with this statement "I HATE LABELS". 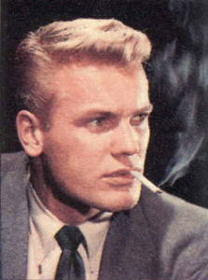 He continues: "Coming from me, that's a strong statement. I don't even like to use the word hate .
But labels are something I've unfortunately dealt with my whole life.

I did Polyester, and I don't regret one minute of it. It was wonderful.
Tab Hunter

Kevin Naff, Washington Blade, "The Reluctant Gay Icon", 14 October 2005, with several quotes from Hunter's then-upcoming autobiography. Naff writes, "Despite his Catholic faith and desire not to be known as a gay icon, Hunter now talks openly about his sexual orientation and his 23-year relationship with [Allan] Glaser. It's another striking contradiction in a life marked by conflicting influences -- the allure of Hollywood glitz and glamour versus his mother's lessons in modesty."

"I've had so many labels slapped on me, you'd think I was a billboard, not a real person."
Tab Hunter 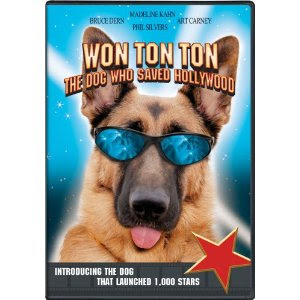 
Check out this Blog


I have utilized Tab Hunter, Confidential : The Making Of A Movie Star by Tab Hunter and Eddie Muller as the source for this blog

Posted by RichardSkipper at 11:26 AM