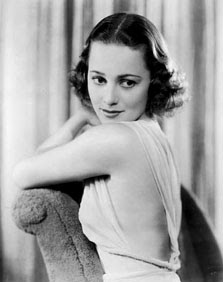 "There was a land of Cavaliers and Cotton Fields called the Old South... Here in this pretty world Gallantry took its last bow... Here was the last ever to be seen of Knights and their Ladies Fair, of Master and of Slave... Look for it only in books, for it is no more than a dream remembered. A Civilization gone with the wind..."


Happy July!
Today is the birthday of two of my favorite film actresses! Olivia de Havilland and Leslie Caron. Both are still with us and if this blog is ever seen by either, I want to celebrate the wonderful gifts they have given to the world.
And they both have Paris in common! 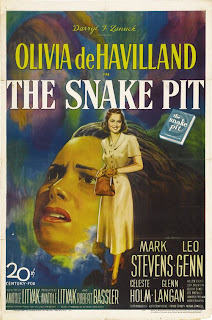 And they both had STAR POWER! I never had the opportunity of meeting either.
However, I do have "six degrees of separation" situations with both.
Years ago, Harold Kennedy did a series of lectures at St Malachy's, The Actor's Chapel, in Manhattan. Around '82 or '83. 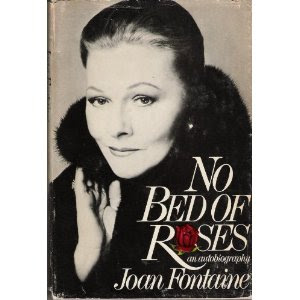 No Bed of Roses had just come out.This wonderfully juicy tell-all reveals a new tragedy, illness, or romantic fiasco on almost every page.
Joan was born in Japan to British parents who were cold and harsh.
Their marriage ended early, and Joan and her sister (Olivia de Haviland) moved to California with their mother. The famous rift (more like a "war") between Joan and her older sister apparently was a case of extreme sibling rivalry that lasts to this day.

Joan was doing a book tour and she was there to discuss the book and sign copies. When she first came on stage, she said, "I will answer any and all questions. But please, no questions about my sister." A woman's hand shot up and she asked, "Who is your sister?"
The entire room burst into raucous laughter.
Joan gathered ALL the flowers on stage, which were massive, and gave them to this woman in the audience. I will never forget that!
But back to our birthday girl. There are so many wonderful images I have of Miss de Havilland on film. As I write these words, they flood through my brain. Of course, Melanie in Gone With The Wind! 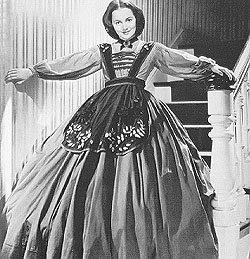 There is THE SNAKE PIT, THE ADVENTURES OF ROBIN HOOD (and several other films with Errol Flynn), HUSH, HUSH, SWEET CHARLOTTE (my favorite), I also love her in THANK YOUR LUCKY STARS!, THE HEIRESS. I could go on and on. She was a star when a star was a star!

Olivia Mary de Havilland (born July 1, 1916) is a British American film and stage actress. She won the Academy Award for Best Actress in 1946 and 1949. She is the elder sister of actress Joan Fontaine. The sisters are among the last surviving leading ladies from Hollywood of the 1930s. 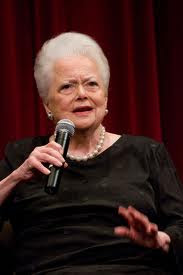 Olivia de Havilland is the last surviving principal cast member from Gone With the Wind. She played Melanie, the sweet southern belle with a backbone of steel, and de Havilland is reportedly very much like the character she portrayed. De Havilland won two Oscars, for To Each His Own, a 1946 drama in which her character became pregnant out of wedlock, and three years later as The Heiress, in which Montgomery Clift might be pursuing her only for her money. She was also nominated for Hold Back the Dawn, in which Romanian Charles Boyer might be pursuing her to marry his way to US citizenship, for The Snake Pit, where her character was committed to an insane asylum, as well as for Gone With the Wind.(Incidentally, yesterday was the 75th anniversary of the release of the book Gone With the Wind by Margaret Mitchell) 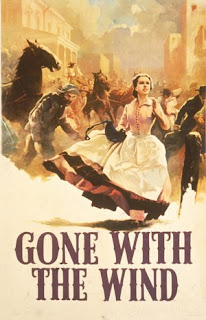 The stars of Gone With the Wind have, for the most part, not been blessed with long lives. 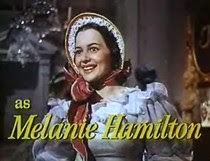 Vivien Leigh, who played the movie's central character, Scarlett O'Hara, passed away in July 1967 from tuberculosis at the age of 53. The life of Clark Gable (Rhett Butler) was claimed in November 1960, when he was 59, by a coronary thrombosis, ten days after he had suffered a severe heart attack. In June 1943, the life of Leslie Howard (Ashley Wilkes)was cut short at 50, when, while he was involved in propaganda and posibly intelligence work for his native Briain during World War II, his plane was shot down by the Nazi Germans. Hattie McDaniel (Mammy), who won an Oscar (the first black to do so and the only black to do so until 1963) for Best Supporting Actress, died of breast cancer at 57 in 1952. 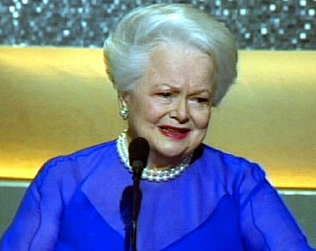 De Havilland got two big breaks in one summer production of A Midsummer Night's Dream.
First, she understudied for Gloria Stuart's character, Hermia, and in true Hollywood fashion got the role when Stuart had to drop out.
Then Warner Brothers decided to film the stage production as a feature, and De Havilland signed a seven year contract with the studio. 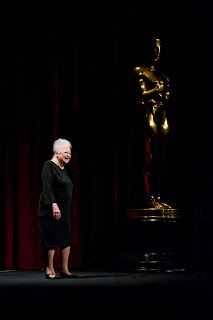 In quick summary once again, de Havilland was born in Tokyo, Japan to a father with an overseas patent law practice and an actress mother. Both she and her sister, Joan Fontaine (Rebecca, Suspicion, The Constant Nymph, Ivanhoe) were among the 1930s' leading motion picture actresses. De Havilland's film debut was 1935's A Midsummer Night's Dream. She is probably best known for her role in 1939's Gone With the Wind and 1938's The Adventures of Robin Hood, in which she played Maid Marian. Although losing the 1939 Best Supporting Actress Oscar, for which she was nominated, to McDaniel, de Havilland eventually won two Best Actress Oscars, for her roles as Miss Josephine "Jody" Harris in 1946's To Each His Own and as Catherine Sloper in 1949's The Heiress. Married twice and the mother of two children, de Havilland has resided in Paris since the 1950s. (Additional biographical details about de Havilland are accessible easily enough. 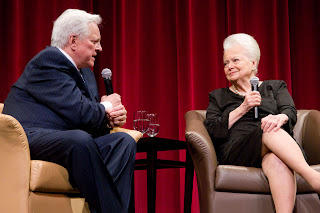 Mickey Kuhn, who, in Gone With the Wind, played de Havilland's character's son Beau Wilkes as a seven-year-old, has been communicating with de Havilland in recent years via letters and notes. He offers this assessment of her: "She's a lovely lady. She's just the epitome of class. And she's a delight to talk to."

However, Kuhn shares a detail that may be surprising about his interaction on the set with de Havilland: "I have to be honest with you. I never met Olivia when I was working. Can you believe that? When [her character] was dying, she was behind closed doors, and that was just a fake wall. I never met her." 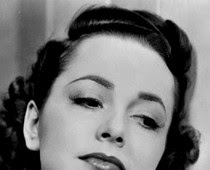 In fact, Kuhn "never had the opportunity to meet her until her 90th birthday. They had a 90th birthday party for her out in Hollywood, and I was invited.

I just briefly met her because those Hollywood types wanted to dominate her. Being the gentleman that I am, I didn't push myself."

According to Kuhn: "Last October, my wife and I were in Paris to celebrate our 25th anniversary. And we were at Olivia's house. We were to have cocktails with her. But something got snafued, and we didn't have the opportunity. But we were at her house, and it was still quite a thrill. 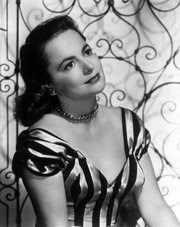 Her staff had forgotten to tell her earlier in the day that I was going to be there. She did say, however, that if I were available the next morning, that we would meet for brunch. But, unfortunately, that was when I had to leave."
Please visit http://www.oliviadehavillandonline.com

Kuhn states: "She's a wonderful lady, and she's in great shape. She's coming out to California in September. Her daughter is getting married, and she's going to be at the wedding. I'm hoping, and I'm praying, that [Turner Classic Movies host] Robert Osborne can arrange a meeting for us."

Kuhn also notes de Havilland's concern about Stalinist atrocities and her resistance to efforts of the international Communist movement to infiltrate Hollywood. He states: "It's nice to know that she was one of those in Hollywood who saw through the Communist plot."

Stacey Albert, an auditor for the City of Philadelphia, is planning a get-together for friends tonight -- which will feature a viewing, at the very least, of The Adventures of Robin Hood -- in honor of de Havilland's 95th birthday. Albert relates personally to the role of Melanie Wilkes.

"Olivia almost always played the shy character [note: de Havilland was displeased, as her career developed, by what she felt was typecasting], never getting the spotlight. That's like most of us as we live our lives ... in the shadow of a sister, brother or other family members. Almost the only major role of hers in which she didn't play this kind of character was in The Adventures of Robin Hood. However, not here! 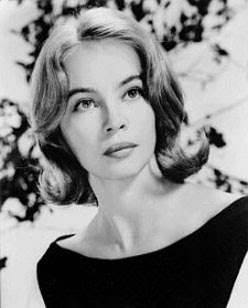 Today is also the birthday of Leslie Caron! Again, I never met her but I do have her recent autobiography autographed to me thanks to my friend Jud Newborn who interviewed her as part of his film series at Long Island University. It still kills me that I was unable to attend that night! As with Ms. de Havilland, there are so many images that run through my head! GIGI, AN AMERICAN IN PARIS, DADDY LONG LEGS, LILI, THE GLASS SLIPPER!


Leslie Caron's mother was an American dancer who briefly made it to Broadway, but gave up her career for marriage, and eventually took her own life. She nudged her daughter toward dancing almost as soon as she could walk, and by the age of 16 young Leslie was chosen to dance with France's prestigious Ballet de Champs Elysees. After three years as a professional dancer, Caron was "discovered" by Gene Kelly, and at the age of 19 she starred with him in the classic An American in Paris.

She made numerous Hollywood musicals, dancing with Fred Astaire in Daddy Long Legs, singing but not dancing with Kelly in Gigi with Maurice Chevalier, and slapping Cary Grant (who slapped her back) in Father Goose. She also worked often in European films, and won a British Academy Award playing the unwed pregnant woman who gathers strength from her odd roommates in The L-Shaped Room. Her more recent films include Funny Bones with Jerry Lewis and Oliver Platt and Le Divorce with Kate Hudson and Naomi Watts.

In semi-retirement from films, Caron runs a now runs a surprisingly affordable bed and breakfast, La Lucarne aux Chouettes (The Owl's Nest), located about 70 miles outside of Paris.


The class that these women exhibited on screen and in their professional lives is also Gone With The Wind. I miss that!