Stearns Matthews Is A Winner!

"Start by doing what's necessary; then do what's possible; and suddenly you are doing the 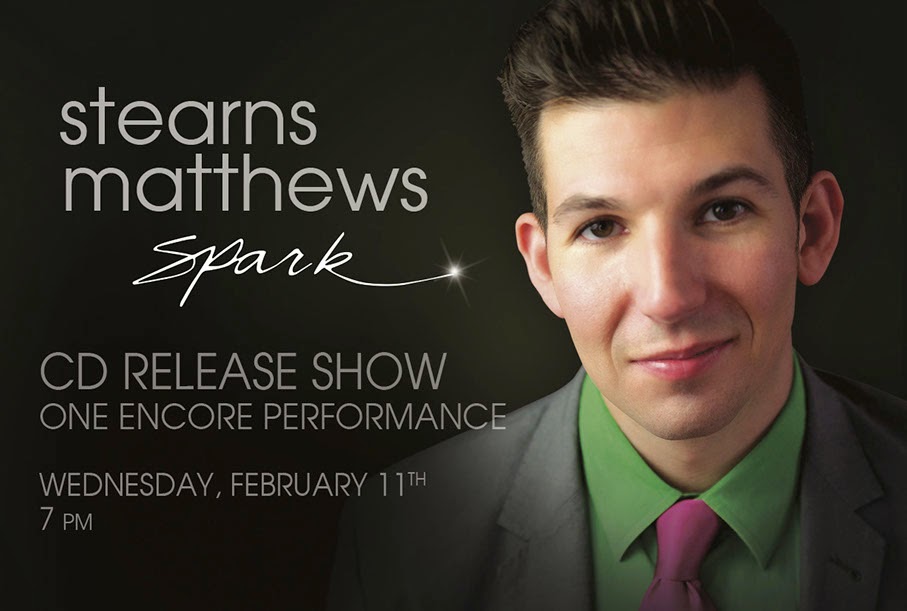 The announcement for this year's Bistro Awards, which will be held at The Gotham Comedy Club on March 3rd, were prematurely leaked twenty-four hours before the official announcement was made due to a glitch on the Bistro Awards website.
One thing, however is certain, Stearns Matthews' win for his CD, Spark, is neither premature OR a glitch.
Every moment in life happens only once. There will definitely be more awards for Stearns as his career continues to unfold. However, this moment in time, is UNIQUE to where he is right now.
Yesterday, we sat down to discuss his win and the road that led to this moment. Today, I celebrate Stearns Matthews and his body of "worth".
My interview began with an off beat question courtesy of my recent interview with Cooper Lawrence. If someone was on a date with Stearns (unlikely to happen due to his upcoming nuptials!), what one thing could they do that would completely turn him off. His response was talk only about themselves way too much. I'm sorry, Stearns, but I want you to talk about yourSELF today!

What does Stearns do when he wants a little "nonsense" in his life? He sits at the piano and plays and sing songs that he probably would never do in public or that people would want him to perform publicly.
What does Stearns want more than anything?
To be performing FULL TIME for a LIVING.
What attracted Stearns to this business? He was a musical theatre major in college. He got really bored playing "other people". He just wanted to play himself. He discovered "cabaret" in high school through a community theatre friend. That solidified the idea of playing himself.  And, here he is, a 2015 Bistro Award winner!
As I stated earlier, the announcement wasn't supposed to go LIVE when it did. There was a technological snafu. Sherry Eaker's webmaster for the Bistro Awards website put the webpage LIVE prematurely. Stearn's friend Kristoffer Lowe, whom I hope to also interview for my blog, sent Stearns a text message which read, "Oh my God! I just went to the Bistro Awards website and WE won!" He had gone to the site just on a whim. That's how Stearns found out. It was a crazy moment. They both put it on Facebook due to their excitement. That is how I found out!
Sherry Eaker asked them to take it down until the official announcement had been made.
What I love about the Bistro Awards is their is no tension in the night. All the winners (as well as the audience) already know that they have won. Each of the winners also entertain. Stearns has not thought about what he will perform at this point. However, he is leaning towards Spark of Creation from Children of Eden (which I am hoping he will be performing!).
That also happens to be the first track of his album. The other choice he is leaning towards is Joe Raposo's Sing, which I also love. That has become a standard for Stearns.
Stearns has good reason to be proud of this CD. It has been a labor of love and a lot of work. He raised about $22,000 last year on Indiegogo to produce it. He selected his team which consisted of musical Christopher Denny and  producer Paul Rolnick. He considers them magicians. He says they made him sound so much better. It is finally done. 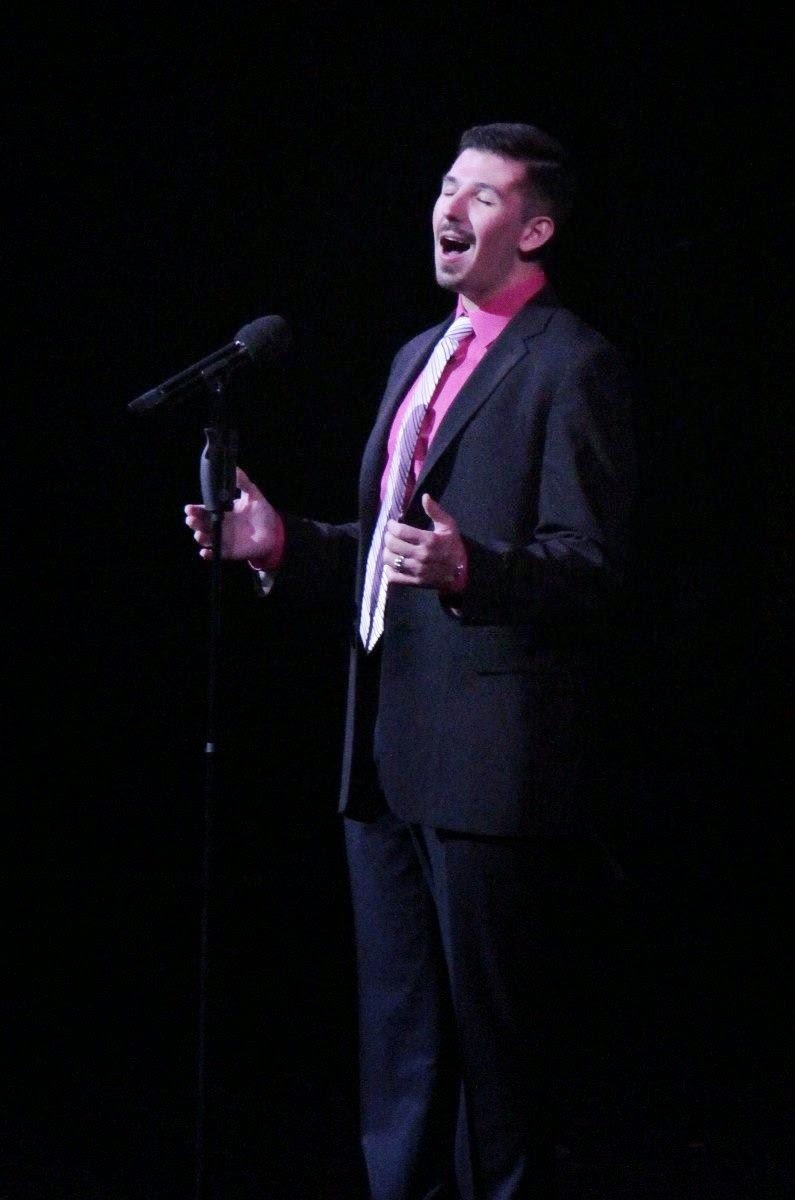 There is not really a theme to the album. It is just a collection of songs they picked that meant a lot to Stearns and they felt that were special. He is super proud of the end result.
There will be a CD release show which, unfortunately for me, falls on my birthday of February 11th. (I have prior plans!)
(See below for details)
He is busy sending out CDs to all that contributed to the CD campaign.He is currently sending this out to radio stations and out for reviews.He is sending to "out of town" venues to hopefully get those bookings. That is really why he created this CD, as a calling card. His apartment has becoming a mailing warehouse. Ah! The life of an artist!
This is Stearns' first CD and hopefully not his last. The advice that Stearns offers to other artists contemplating "following in his footsteps" for lack of a better phrase is to TAKE YOUR TIME. There is no need to rush anything.
This is not like a show in which you book the dates and then start working towards that. Don't schedule studio time until you are ready. Don't rush to pick your music. There are absolutely no deadlines UNLESS you have a deadline! 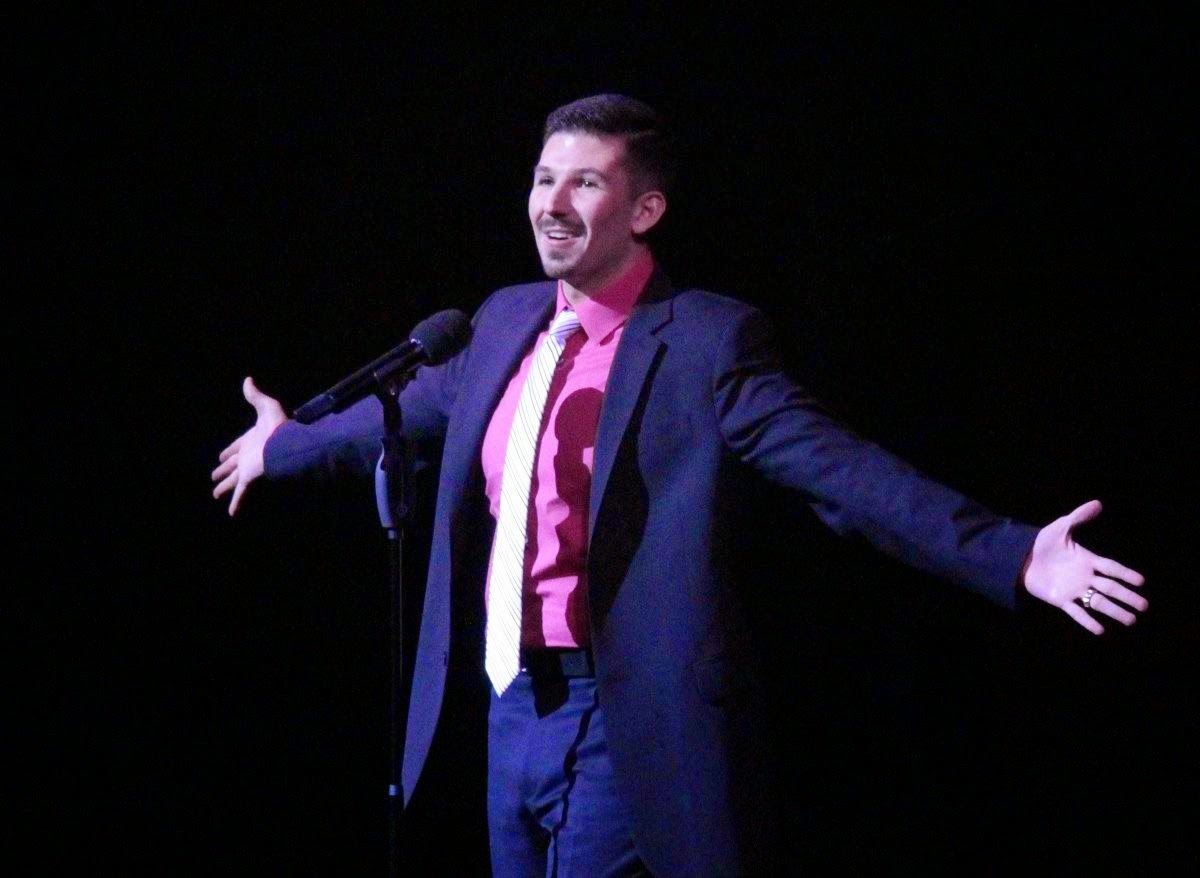 Many people don't if they are self producing which is usually the case in  "cabaret CD". Again, Take your time; there is no rush. They started working on this CD in September of 2013 and didn't even record the vocals on the CD until May of 2014. The CD came out in November of 2014. He wanted to make sure that everything was the way he wanted it. He is really happy with  that process.
Stearns is absolutely sure that he should be doing EXACTLY what he should be doing at this point in his life.
Most artists question that all the time. However, now the CD is out, Stearns feels as if he is creating this little niche for himself.

Getting the Bistro is a major validation that he is on the right track. By the way, I won my Bistro Award in 1998. Stearns was in the 8th Grade in HIGH SCHOOL!  If Stearns could change ONE THING about the profession, he would like to roll back the clock with technology a little.
There was a time when people used to be more willing to go out and see new artists. They don't any more. They can look them up on YouTube. They then make their minds up as to whether or not they like them as opposed to going in person and checking them out. Artists are meant to be experienced in the company of an AUDIENCE, really SEEING a performer perform. Now, that we have have YouTube and other outlets, things have changed drastically. 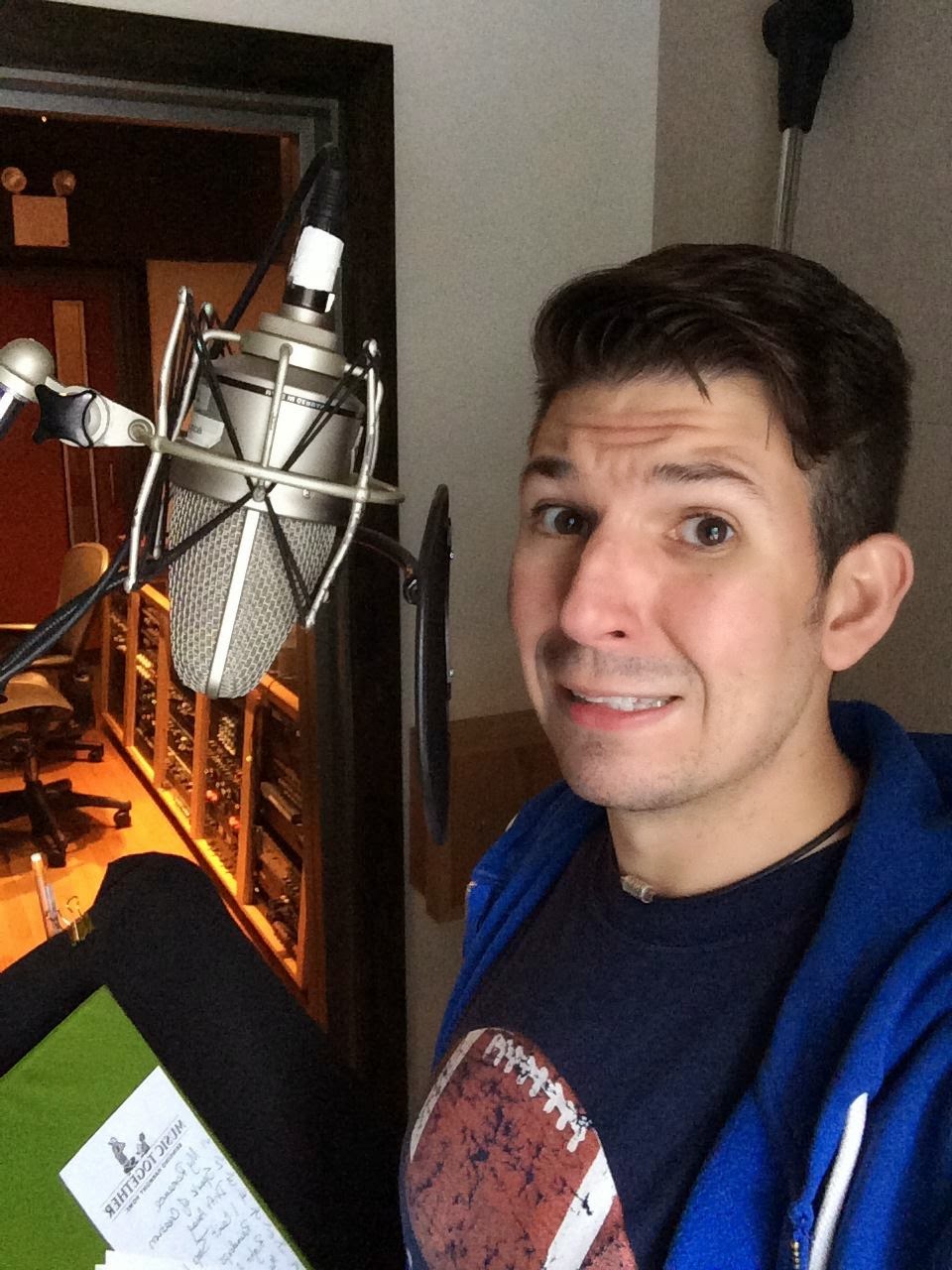 Stearns cannot imagine doing anything else because, according to him, he doesn't know how to do anything else.
Beyond the Bistro Award win, one thing that stands head and shoulders above everything else in Stearns career up to now was doing the MetroStar Competition at The Metropolitan Room. He did the first one in the summer of 2008.It was the summer after he graduated from college. The first day of that competition came within one month of his graduating from college. He had no idea how it was going to end but it was an amazing experience. He didn't know what to expect when he showed up. He says it was like a free master class. He was among the masters of cabaret. They helped to shape him and really threw him into the waters of cabaret.
Although he had just graduated from college, he had just done his first cabaret show, at Don't Tell Mama, the day before the MetroStar Competition began.
He became the first runner up. The winner was Anne Steele.
When things turn out as Stearns had envisioned, he feels that he has masterminded everything. When they don't turn out as he thought, he questions the circumstances that led to that moment.

One of the things that has attracted Stearns to cabaret is the fact that, for the most part, it is SELF directed, more so than if one is a chorus performer, for example or an actor in theatre.
It seems that way to Stearns. He feels that it is 50/50 between the choices he makes and happenstance.
From entering into the world of cabaret up to this moment, it is a total of six years.
When Stearns first entered this world, he was completely star struck by it all. When he was at the MetroStar competition, he was awe struck by the fact that Baby Jane Dexter was there. Then, he realized Karen Mason was on the panel!
He loved her in And The World Goes Round. She was his idol and now she was judging him in a competition!

Now, six years later, he knows these people personally so it is a different feel. It is an interesting perspective shift. He loves Baby Jane Dexter and Karen Mason. He realizes that when they were his age, or just starting out, they were having the same experience with their idols.Everyone is trying to figure it all out.
As mentioned earlier, Stearns is getting married!
His partner, Michael, and him have been together eleven years.They are getting married in May. Balancing their careers and a life together has always been easy for them. He is a graphic designer, so he is in the arts as well. Stearns doesn't think of it as a balancing act.
It just is.
If Stearns could change one thing about cabaret, he would magically make a way for it to appeal on a wider scale to a younger audience, not to change it, but rather, to bring that younger audience in. Let's face it, THEY are our future. He knows several younger people who are as star struck as he is about the Karen Masons and the Baby Jane Dexters, but it's not enough.
If he could change ONE THING about Stearns Matthews, it would be not to take things so personally. He is really excited about this Bistro 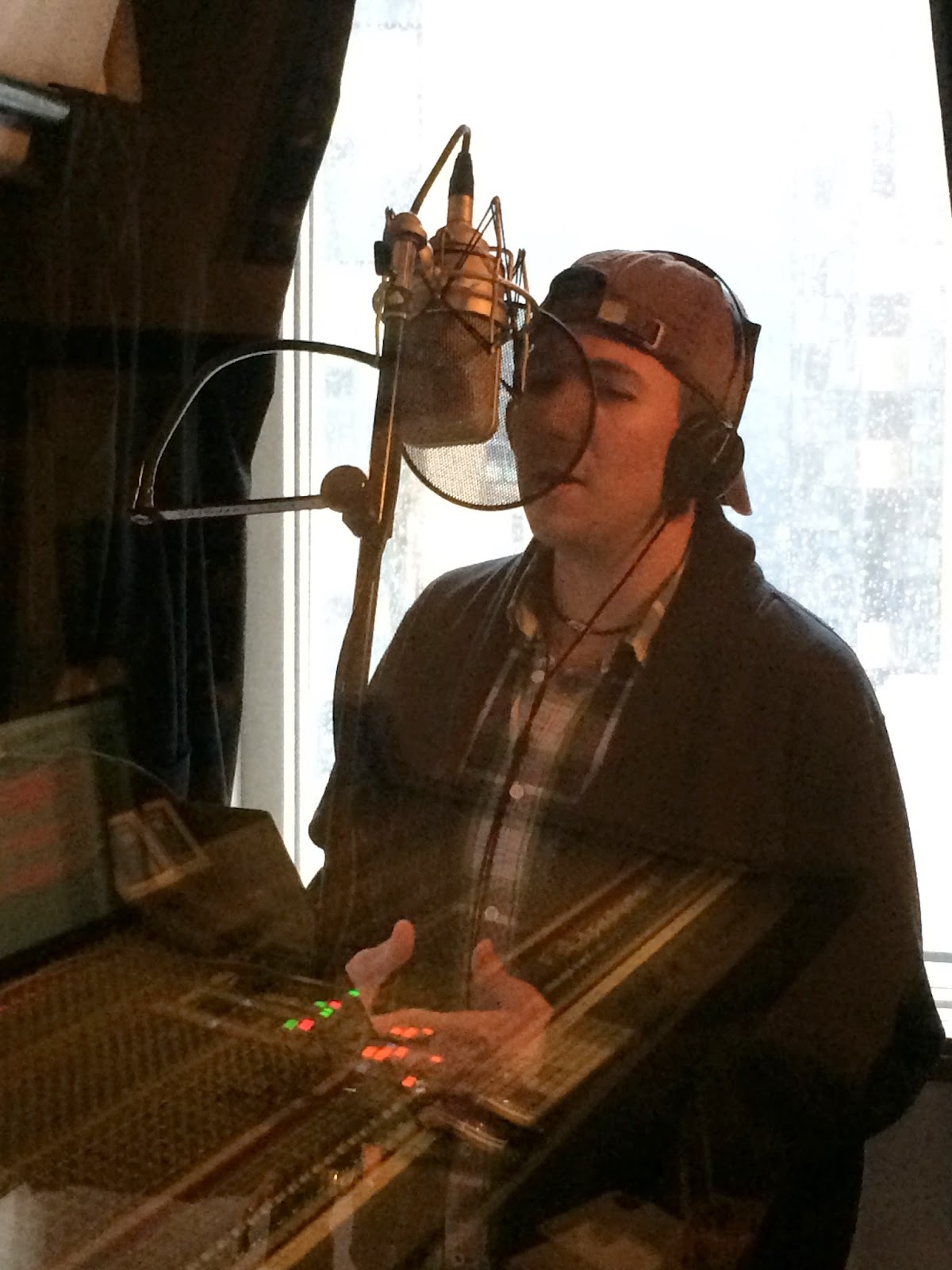 Award, but he has been nominated for a MAC (Manhattan Association of Cabarets and Clubs) Award and it so far has eluded him. He is currently reading Amy Poehler's memoir, Yes Please. She calls awards "pudding". You tell yourself that you don't want the "pudding". Then someone tells you that you really deserve the "pudding" and that makes you want it even more. Stearns wishes he didn't want the "pudding" so much and that he didn't take it so personally when he doesn't get it.
Growing up, Stearns's favorite children's book was Alice in Wonderland! Now, he is living it! He IS a winner! I can't wait for the NEXT chapter! 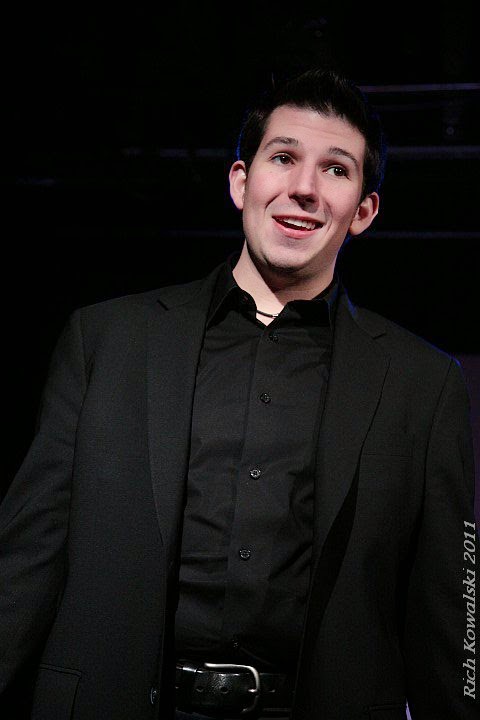 www.stearnsmatthews.com/album.html
The first track is available on Stearns' site right now for free for a limited time! 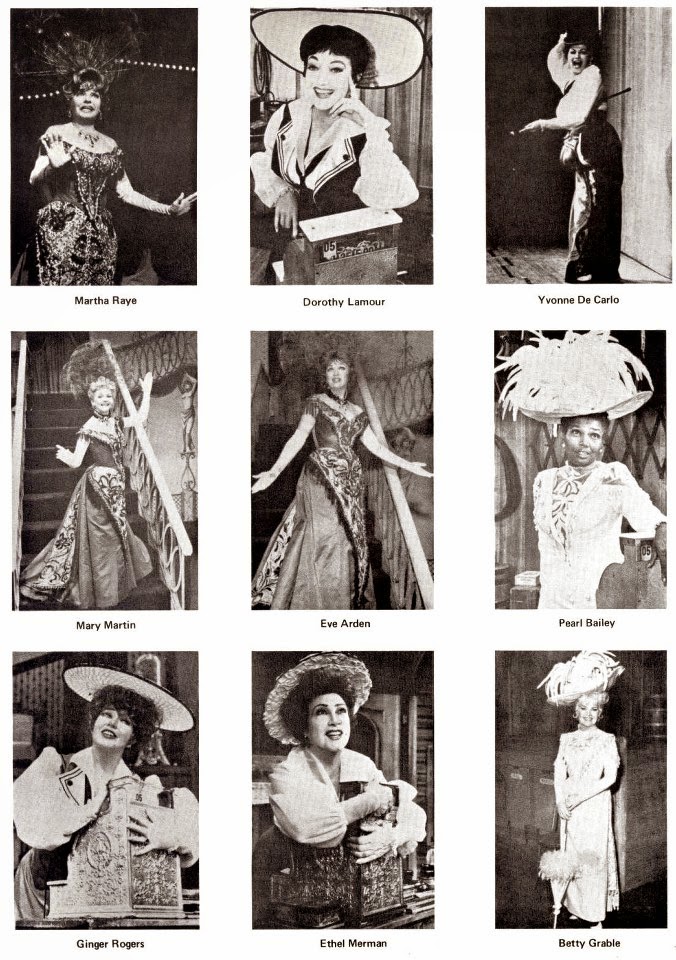 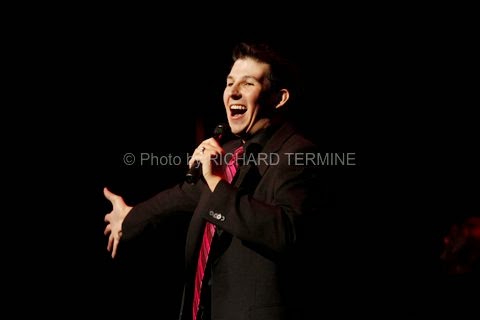 Please join Richard Skipper in NYC February 25th!. He will be interviewing Lee Roy Reams LIVE ON STAGE to benefit The Spiral Theatre Studio at 300 West 43rd Street, 6th Floor New York, NY 10036 at 8PM!  The evening with Lee Roy Reams will begin with a Wine and Cheese mixer at 7:30 PM, and interview of Lee Roy Reams at 8 PM promptly. Call me if interested. 845-365-0720 $30.00 RESERVATIONS A MUST! Please reserve today!! SEATING IS LIMITED! 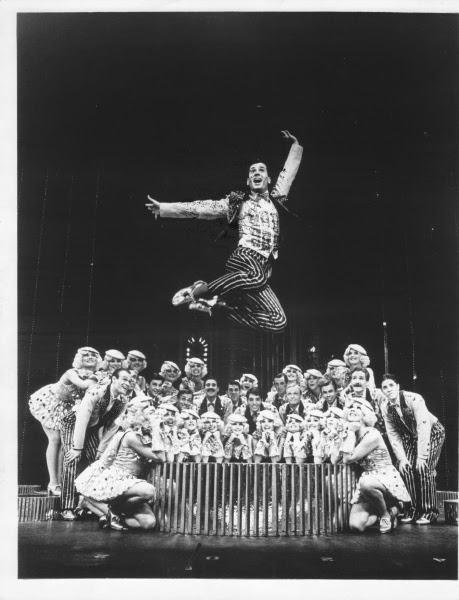 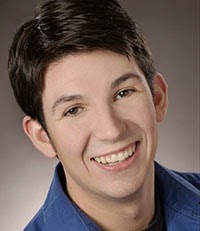 Posted by RichardSkipper at 11:14 PM