Today, I was going to write about a conversation  I had recently with Stephen Crowley who wrote his own book on Hello, Dolly! in the late 80s.
Unfortunately, for all of us, it was never published. Based on conversations I had with Stephen, I think it was all about the timing. As we move towards the 50th anniversary of Dolly's Broadway opening, I hope the planets will align so that I can share these amazing stories from those that were there with you. I was terribly saddened to receive the following over the weekend: 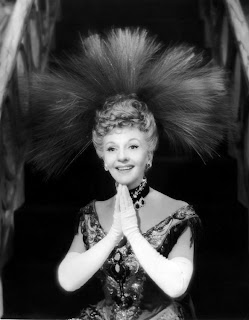 It is with great sadness that I write about the passing of Marilynn Lovell Matz, widow of the great Peter Matz. Marilynn was an extraordinary singer, having been a staple on TV in the 50s (a regular on the LIBERACE Show) and 60s (Broadway musical specials such as THE ZIEGFELD TOUCH and HELLO, DOLLY 'Round the World, which chronicled her tour as Mrs. Molloy to Mary Martin's Dolly), thereafter becoming a renown therapist in L.A. for AIDS patients and their caregivers. She continued to sing with Peter during the 80s and 90s in a show they performed in living rooms and concert halls for the benefit of AIDS and was always a highlight of the many benefits in L.A. benefiting a variety of charities. As if these accomplishments weren't enough, she did it all while fighting multiple sclerosis for three decades and working tirelessly for the cure of that illness, to which she finally succumbed on Saturday afternoon. (Source: Mark Sendroff) 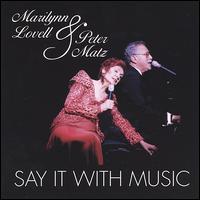 Marilynn was one of those "journeymen" entertainers who had a successful career but did not become a household name. I wanted to interview her for my book.
Alas, I will never have that opportunity.
Once again, Carpe Diem!
May Marilynn's passing be a reminder of that for all of us.
Marilynn, today, this is for you.

I knew her well and have been heartsick ever since I heard. I don’t know what you know about her..she became L.A.’s leading therapist for AIDS patients and their caregivers, while continuing to fight multiple sclerosis for 30+ years and performing in the AIDS benefit show she and Peter did in living rooms and concert halls. She had a small role in the Rob Reiner film, GHOSTS OF MISSISSIPPI and was in pretty much every L.A. benefit related to AIDS organizations. She roomed out of town with Barbra in the pre-NY I CAN GET IT FOR YOUR WHOLESALE tour (her part was cut out of town, so she never came in with it). Barbra licensed the right to use her and Peter’s arrangement of “Cock-Eyed Optimist” in her last tour. My own personal story that stands out is when I was in West Hollywood for a few days around my birthday, I returned to my hotel room on my birthday night to find an orchid on my bed. I called the front desk to see where it came from and was told that a woman using a walker insisted she was my friend and wanted to surprise me with this, so they accompanied her into the room and let her leave the orchid on my bed. She came from her house on Mulholland all the way to WeHo to leave me an orchid. She could barely walk or drive, but she wanted to show me her love and boy, was that love returned!

Mark D. Sendroff, Esq.
Hi Richard! I remember many a day up at Marilyn and Peter's house off of Mulholland in LA. I did some arranging for her and so enjoyed her strong yet vulnerable vocals. Xox
-John McDaniel

I was so saddened by Marilyn's death. She was so talented, beautiful , brave and such an inspiration to her patients.Her devotion to her art was an inspiration to me.She had amazing and devoted friends; this is a sad time.Thank you Richard for celebrating her. Nancy Dussault

She was my therapist 30 years ago and very instrumental in my decision to enter the field after my heart problems limited my ability to perform. What a dear, wonderful woman.
Bonnie Sher
It was very difficult to find anything on line. If you have anything to share, please send to Richard@RichardSkipper.com and I will add it.
Lyrics by Marilynn Lovell
Music by Bill Marx

Marilynn Lovell Matz, widow of the late, great arranger/musician Peter Matz died in Los Angeles this week after a 30-year battle with multiple sclerosis. Refusing to allow her illness to define her life, Marilyn, an accomp[lished and respectd actress/singer went on to become a highly regard therapist dealing mostly with AIDS patients and their caregivers.
Marilyn was simply one of those  special people you never forget. She was a singer,and a mainstay on television in the 1950s (a regular on "The Liberace Show" and in the 1960s,  she starred in Broadway musical specials such as and "Hello, Dolly - 'Round the World, " which chronicled her tour playing Mrs. Molloy to Mary Martin's Dolly Levi.
As mentioned, aside from her talents and persuing a career in show business, she would also go on  to become a renowned and respected psychotherapist in Los Angeles - especially focusing on AIDS patients and their caregivers. She and her brilliant musician husband Peter found time to work up an act and continued to sing throughout  the 1980s and 1990s in an eclectic,  polished  show they performed from living rooms to concert halls to cabarets (she had several highly successful engagements at Eighty Eight's - thanks to her dear friend and co-owner Erv Raible) and at many  benefits for numerous AIDS charities. She was always a highlight of the many benefits in L.A. raising funds  for a variety of charities. Whatever she did and whenever she could, like their album title, Marilyn said it with music. Knowing her was a gift. Her caring spirit and thoughtfulness of others will never be forgotten.
Through it all, she fought her ongoing  battle with multiple sclerosis for more than three decades. Her  tireless fundraising efforts helped that cause greatly as well.  She passed away peacefully earlier this week as a result of MS.
More about the carer of Marilyn Lovell Matz
Throughout her career, Marilyn Lovell Matz was  a versatile singer and actress,. She was at home in all media, Ms. Lovell's work in film included features roles in "Ghosts of Mississippi" (directed by Rob Reiner), "The Gifted," and "Through A Glass Darkly. "She consistently delighted viewers on major television talk shows, including The Today Show, The Tonight Show, The Dick Cavett Show, The Steve Allen Show, The Mike Douglas Show, and The Merv Griffin Show.
In theater, Ms. Lovell garnered high praise for her portrayals of Mrs. Molloy in the international company of Hello Dolly!, starring Mary Martin, and of Mrs. Peachum in The Threepenny Opera (Reprise! Broadway in concert series, UCLA). She also triumphed in leading and featured roles in: Screen Test (Skylight Theater); Kiss Me Kate (Sacramento Music Circus); Pal Joey (Northwestern University); The Kitchen (L.A. Actor's Theater); The Hairy Ape (L.A. Actor's Theater); Journey to the Day (Melrose Theater); among other productions.
An ardent supporter of causes in which she believed, she sang at concerts for UNICEF and regularly performed benefit concerts for AIDS Project Los Angeles (including the S.T.A.G.E galas) and Shanti Foundation. She was a spokesperson for the National Multiple Sclerosis Society and is the recipient of their Champion of the Arts Award (New York, 1998) and their Hope for

MS Award (Los Angeles). A psychology major at UCLA, Ms. Lovell maintained her career as a psychotherapist until a few years ago.
Their house on Mulholland Drive was always hosting and mixing the very famous and the struggling. Marilyn and Peter Matz were a match made in heaven ... and now they are.
Marilyn's favorite quote was from William Saroyan. It says it all about the lady: Seek goodness everywhere; and when it is found, bring it out of its hiding place and let it be free - and unashamed.

Thank you Marilynn, for the gifts you have given and will continue to give to the world.

Reserve today for Peggy Herman. Click on the above banner and be part of our star studded audience!

Posted by RichardSkipper at 2:18 PM