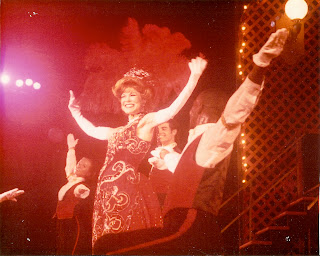 Nancy Sinclair has a connection to Hello, Dolly! that started at a very young age. She auditioned for the Ginger Rogers touring company at the age of 17 and was cast as Ermengarde. Unfortunately, her mother could not commit to going on the road and since Nancy was underage, they would not allow her to go without a parent's supervision. Move forward to 1981. Nancy auditions for, and gets cast in 42nd Street on Broadway as Wanda Richert's standby! Her experiences on that show warrant its own book. She did, however work with both Gower Champion and Mister Merrick!

In the summer (July and August)  of 1998, Nancy played Dolly Levi at The Galveston Island Outdoor Musicals in Texas with Broadway star Jack Dabdoub as Horace Vandergelder...yes, the same theater that Marilyn Maye had done it previously. As a matter of fact, Nancy sang to the instrumental tracks that were created for Marilyn Maye when SHE did it! This was at a 2000 amphitheater and therefore deserves inclusion in this book.
Jack Dabboub was a regular at this theater. He was returning at that time for his seventh season. He had already been a professional actor in New York for thirty or forty years.
It was such a hit that the theater brought them back for a second year (1990). Then they brought them back together in 1998 for Dolly! Jack had done Dolly opposite Marilyn Maye years before. 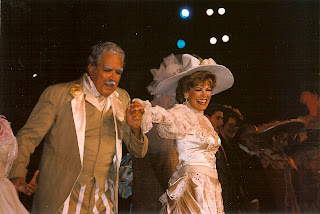 Since the theatre liked the chemistry between Nancy and Jack, she just got a phone call. She didn't even have to audition.
When you walked into the theatre, at the concession stands, there were cans of "Off" for the mosquitos and umbrellas. You never knew whether or not it was going to rain, but the mosquitos were always there.
The stage was the size of Radio City Music Hall. 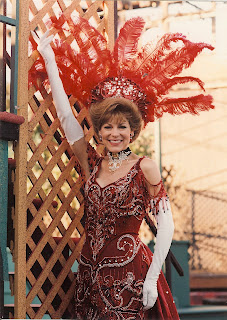 On each side of the stage were turn tables. Then there were "grass areas" in front of the stage. The backdrop was rocks, tree, and sky. High school and college kids would be hired for the summer to work behind the scenes and as part of the cast. They would fill up the entire stage with these kids. They would bring the leads in professionally from New York and Los Angeles. It was a great experience. Nancy loved working there. She said it was like a paid vacation. She would go to the beach in the early afternoon. It was so hot there that when they were in rehearsals, they would start rehearsals between 6 and 7 in the evening and work until about 3AM. Their lives were turned upside down because of the heat. It took some getting used to. This was an Equity production, by the way. The mosquitoes were the only sore point of this production.  Behind the theater was a pond. After the show each night, they would do a water ballet like they do at the Ballagio in Vegas with music and lights. That was a haven for mosquitoes. There were also a few alligators in there.
Nancy says it's hard to pick out one moment in Dolly that stands above all others, "You don't get to play a part like that every day". She loved working with Jack. He was funny. He brought out the best in Nancy.

Here are a couple of Nancy's thoughts on "mishaps":

I got my Bow caught in the closet door when Corneluis Hackl raced to hide from Horace in the hat shop. I couldn't move from the door. Jack Dabdoub (Horace) rolled his eyes laughing watching the scenario as I tried break free.

I finally had to say straight out to the audience, "I'm Stuck!" The audience loved it with a big laugh. Jack turned away as Corneluis opened the closet, performed some hand gestures to release my bow from the closet. He waved to the audience and got a round of applause. Very cute! 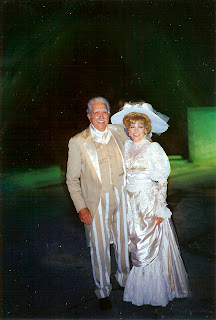 During the Turkey scene I raised my wine glass and when I went to put it down, to hard on the table I think, the stem broke off. The audience gasped. The scene stopped. The kids back stage were terrific! I stood up and called for the waiter to bring me a new glass. One of the dancers, danced his way on stage with a tray and a new wine glass. Handed it to me, took a bow and the audience applauded him. Such fun!!!

Little things like this make the theatre so exciting!

Nancy remembers a lovely man who had a hair salon there, Josef. He would go to all of the productions through the years. The pictures included in this chapter on Nancy are the pictures he took. He took pictures on different nights of the show from beginning to end. Nancy has an entire book of the show. Obviously some nights were different from others. Nancy forgot her gloves one night! He did the same for South Pacific. He did that when they did Oklahoma! He gave Nancy a book, Jack a book, and other leading characters as well. If it wasn't for Josef, we would not have these pictures. 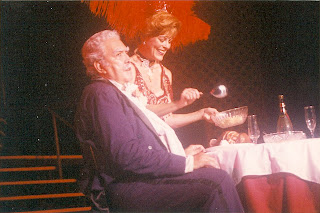 They rehearsed for two or three weeks. The costumes were fantastic, the sets were wonderful. The famous red gown weighed a ton. Sometimes the steam would rise from the dress because of the heat.
The one thing that Nancy has carried with her from doing Dolly, and from the theater itself, was the camaraderie of all of those kids.
Working together as ONE unit. Nobody was the "star". The show was the star. Yes, Jack and Nancy had the last bows. 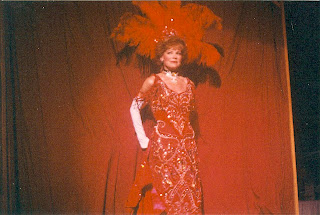 At the end of the day, it was "everybody". They all worked together to put on a really spectacular production. The kids worked just as hard on the stage, behind the stage, in the booth, everywhere. It was just a wonderful experience at this theater. Was it Galveston? Was it the theater? Whatever it was, it was magical.
The only other person Nancy has seen play Dolly is Streisand.
When I asked Nancy what her thoughts are on Streisand in the movie, she said, "Let's go back to the mosquitoes!" She does say that Streisand is Streisand and she is hard to beat in the voice department. 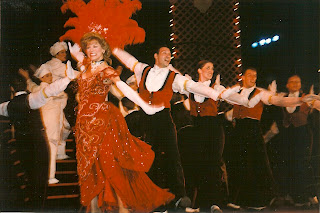 She can't compare her with anybody. The opening number of course is different. Just Leave Everything To Me. Nancy remembers the train which was still at 20th Century Fox for a while. The train used to be there when you drove through the gates. When you passed the guard, it was right there on the right side.  Nancy was fortunate enough to have a couple of auditions there. She would park on the lot and you drove right past it. 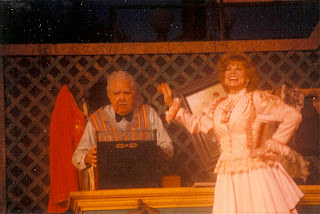 Every other day, a plane would fly over the theater grounds with whatever chemical it was to get rid of the mosquitoes. Also, each night before the show, a man would go out with a fogger and spray around the stage area so the audience and cast would not be eaten alive. One night, the fogger broke down. No one was told. Everyone was getting eaten alive. The audience and cast alike. All the men were in one dressing room. The women in another. No star dressing rooms. The girls kept going up to Nancy and say, Will you please do something? We're dying!" Nancy responded by saying that she has already thought about it and she was on her way to see the director and producer right after the show. She went in to see the producer and pulled up her sun dress and showed him the backs of her legs. She was speaking out on behalf of the entire company. She was told that the fogger had broken down. She asked the producer why they didn't go out and get another one. That poor audience, for heaven's sake! She got very uppity for a moment and said, "Well, if the place isn't fogged tomorrow, you can put on my understudy who you have never rehearsed and you'll have a nice show." She did that for all the girls in the chorus. From that point on, it was always fogged. They never messed around with that again.


As hot as it was was there, that had no bearing on the design of the costumes. The costumes were not designed to be worn outside. She forgets where the costumes came from, to be honest. But they were spectacular. Her red dress, everything she wore was beautiful...AND heavy. However, when you're out there on the stage, you really don't think about it.  The adrenaline is really going. The only thing she remembers as far as the comfort of the costumes is the steam coming out of that red dress!

Nancy's thoughts on Jerry Herman...Brilliant. "We don't have people like him anymore."


The "tracks" were sent to Nancy by Jack. These were the tracks that Marilyn Maye sang to. The orchestrations were done in London, a huge orchestra, in Marilyn's keys, the way she wanted it done. So, obviously, a few things were different from the original cast album starring Carol Channing. The keys were a little higher. That was actually better for Nancy. Even though they were tracks, they were brilliantly done. It filled the air. It was like the London Philharmonic was playing there. "It was just beautiful. Just gorgeous." Sometimes, she actually forgot that she was singing to tracks. 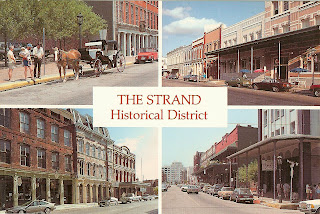 The biggest change that Nancy has seen in the industry since doing Dolly in 1998 is that musicals are not the same anymore. Musicals have gotten so "serious". You don't go out of a show humming a tune.


When Nancy did the national tour of 42nd Street, she worked with two Dollys: Bibi Osterwald and Carole Cook. She also worked with Lee Roy Reams (Cornelius in the 77 tour and Broadway revival, directed 94 Revival, and various other productions). 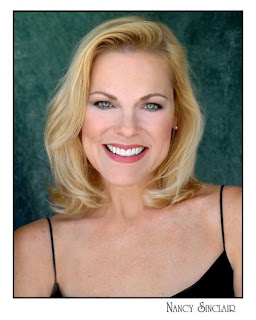 Nancy would love to play Dolly again. Every actress I have interviewed has said the same thing.


Unfortunately, The Galveston Island Outdoor Musicals in Texas is no more. Hurricane Ike put it under water. The Strand which was the historical area was destroyed. The sea wall that was built in the 1800s wasn't high enough for this hurricane.


Mary Elizabeth Moody Northen (10 February 1892 – 25 August 1986) was an American financier and philanthropist from Galveston, Texas. She was the daughter of financial and insurance tycoon William Lewis Moody, Jr. and aunt of businessman Shearn Moody, Jr. She was the one who started the theater. She put her money into it to bring theater to Galveston. It was an epic theater under the stars in the fresh salt air. It was a special place and so sad that it is gone now. And no one has stepped up to the plate to rebuild. Of course, this was the cause of a natural disaster. However, the economy has also forced the closing of so many theaters throughout the country mentioned in these pages.

From Nancy:
A big Thank You to Neil Larson, the Director, Paula Sloan, good friend and fabulous Choreographer and also dear friend Mike Skiles, the Executive Director who brought Jack and I together on the stage one more time!

Thank you, Nancy, for the gifts you have given and will continue to give to the world.


Call On Nancy! You are worth celebrating!
Your devoted fan,

Reserve today for Peggy Herman. Click on the above banner and be part of our star studded audience!


Posted by RichardSkipper at 3:40 PM